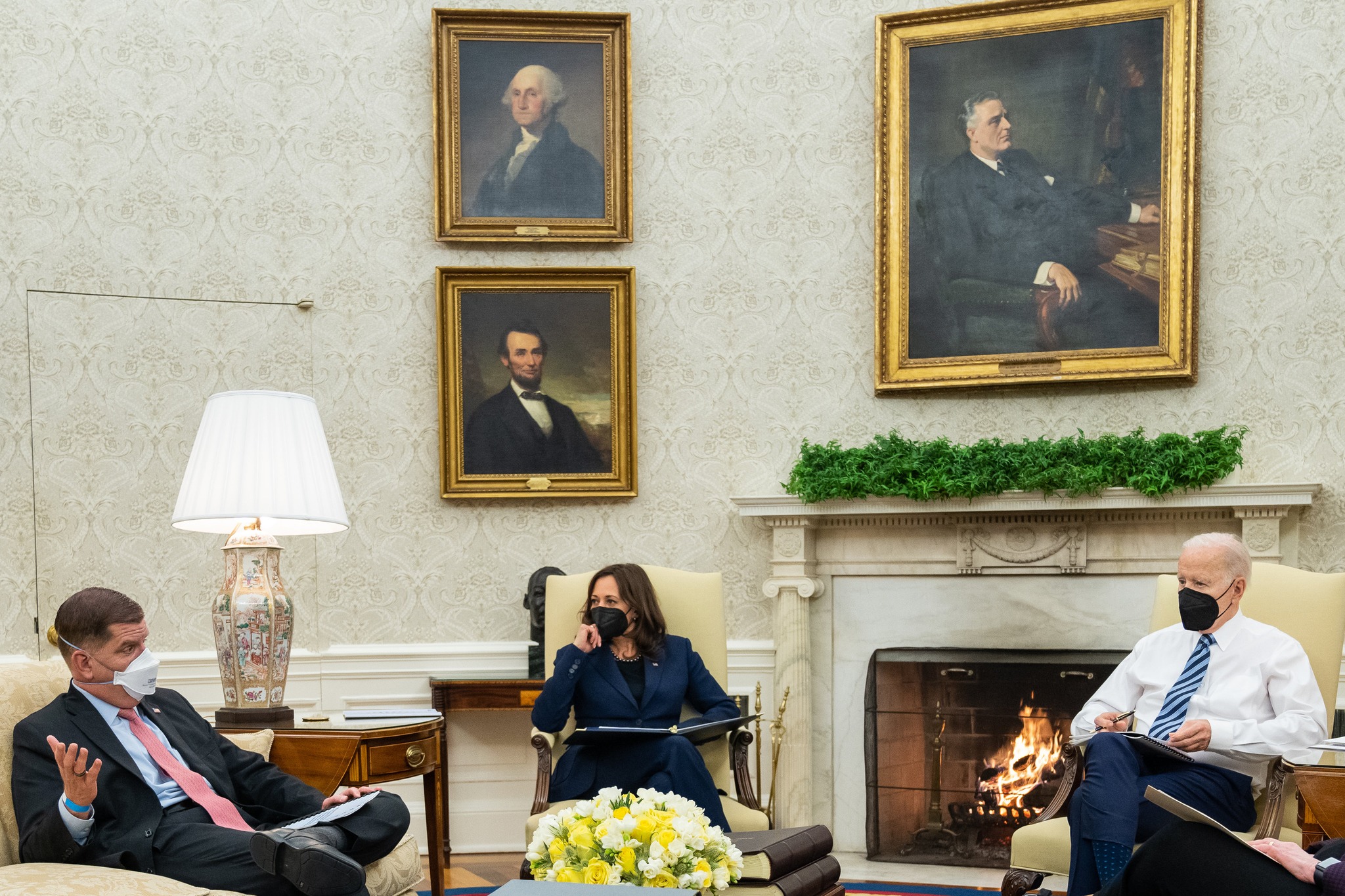 “Some of the White House documents that Donald Trump improperly took to his Mar-a-Lago residence were clearly marked as classified, including documents at the ‘top secret’ level,” the Washington Post reports.

“The existence of clearly marked classified documents in the trove — which has not previously been reported — is likely to intensify the legal pressure that Trump or his staffers could face, and raises new questions about why the materials were taken out of the White House.”

New York Times: “Donald Trump once thundered that the questions surrounding Hillary Clinton’s use of a private email server were ‘bigger than Watergate.’ On his 2016 presidential campaign, ‘where are her emails?’ became a Republican rallying cry that was soon replaced with an even more threatening demand: ‘Lock her up.’”

“Now, it’s Mr. Trump who faces accusations of improperly taking government records to his private residence. But among Republicans, once so forceful about the issue of mishandling documents, there was little sign of outrage.”

“New York City on Friday is expected to fire as many as 3,000 municipal workers who have refused to get coronavirus vaccines,” the New York Times reports.

“Fired up by sky-high inflation prices, Sen. Joe Manchin (D-WV) said he has the political will to do the unpopular thing: lift the cap on income taxed for Social Security to $400,000 in order to sustain that program,” Politico reports.

Said Manchin: “You could raise it to $400,000 overnight… I’ve got the will to do it, that’s all I can tell you because I’ve got grandchildren. Ten grandchildren. We’ve got future generations depending on us to the right thing. I’m willing to do a lot of good things on climate too.”

Punchbowl News: “The American people are sour on the state of the economy, and poll after poll after poll shows that rising inflation is driving that pessimism. This is bad news for President Joe Biden, and even worse for Senate Democrats.”

“So we spoke to more than a dozen Senate Democrats, including their most vulnerable 2022 incumbents, about how Congress should respond to the inflation crisis. What’s most surprising to us is their responses were kind of all over the place. They don’t have a unified message. Compare that to the GOP message (accurate or not) – the government is causing inflation by spending too much money – which is easily understood and digested.”

“I’ve been ringing the alarm bell for forever. I mean, for the last year about inflation. Nobody’s been listening. Now we’re seeing a basic threat. It’s a seven and a half percent tax on everybody, on every product you buy. It’s just unbelievable!”

— Sen. Joe Manchin (D-WV), in an interview with Hoppy Kercheval, calling on the Federal Reserve to stop “pussyfooting around” and raise interest rates.

“Black female lawmakers are elated that President Biden will soon nominate the first Black woman to sit on the Supreme Court,” the Washington Post reports.

“But there are concerns that the early jockeying over whom he should choose will pit potential nominees against each other at a time when the party should be focused on celebrating a historic moment.”

The longer Biden waits to announce, the more jockeying there will be.

Biden predicted that his eventual nominee would have GOP support because he’s “not looking to make an ideological choice.”

Said Biden: “The shortlist are nominees who are incredibly well qualified and documented. They were the honor students, they come from the best universities, they have experience, some on the bench, some in the practice.”

He added: “What I’ve done is I’ve taken about four people and done a deep dive on them, meaning thorough background checks and to see if there’s anything in the background that would make them not qualified.”

The President met with Democrats on the Senate Judiciary Committee to hammer out a nomination strategy earlier on Thursday. He signaled to the senators that he would start interviewing candidates next week, people who were at the meeting told the Washington Post.

“Satellite images collected on Wednesday and Thursday reveal new deployment and positioning of Russian military equipment and troops in multiple locations around Ukraine, including Crimea, western Russia and Belarus, adding to an already ominous buildup that has fueled invasion fears,” the New York Times reports.

Meanwhile, President Biden warned Americans in Ukraine in an NBC News interview: “It’s not like we’re dealing with a terrorist organization. We’re dealing with one of the largest armies in the world. It’s a very different situation and things could go crazy quickly.”

“US officials have warned that Russia has continued to ramp up its military activity around the Ukrainian border, despite a flurry of diplomatic efforts to defuse the crisis including a high-profile visit to Moscow this week by French president Emmanuel Macron,” the Financial Times reports.

“French President Emmanuel Macron refused a Kremlin request that he take a Russian COVID-19 test when he arrived to see President Vladimir Putin this week, and was therefore kept at a distance from the Russian leader,” Reuters reports.

Said a French source: “We knew very well that meant no handshake and that long table. But we could not accept that they get their hands on the president’s DNA.”

“What began as a small-but-loud truck convoy protest against Canadian pandemic restrictions has snowballed into an international crisis that’s been choking the busiest border crossing in North America all week,” Axios reports.

“Copycat convoys are spreading in other countries, including the United States, where officials warned of a potential disruption to Sunday’s Super Bowl in Los Angeles.”

“A convoy of truckers opposing cross-border vaccine requirements has stopped traffic from crossing the Ambassador Bridge between Windsor, Ont. and Detroit, the busiest international crossing in North America that facilitates the exchange of more than $300 million worth of goods per day.”

“President Biden will start to clear a legal path for certain relatives of victims of the Sept. 11, 2001, attacks to pursue $3.5 billion from assets that Afghanistan’s central bank had deposited in New York before the Taliban takeover,“ the New York Times reports.

“At the same time, Mr. Biden will issue an executive order invoking emergency powers to consolidate and freeze all $7 billion of the total assets the Afghan central bank kept in New York and ask a judge for permission to move the other $3.5 billion to a trust fund to pay for immediate humanitarian relief efforts and other needs in Afghanistan.”

“Shoplifting has gotten so bad nationally that chains like Rite Aid are closing hard-hit stores, sending terrified employees home in Ubers and locking up aisles of seemingly mundane items like deodorant and toothpaste,” Axios reports.

“Retailers are already reeling from the pandemic, supply chain woes and the labor shortage. Now they’re combating systematic looting by organized crime gangs — which are growing more aggressive and violent.”

Olivier Knox: “With relatively few exceptions in U.S. history, the top brass at the Pentagon has known more about waging war than the president of the United States, but he’s the one in charge. The CIA has more spycraft. NASA has actual rocket scientists. But they, too, answer to the Oval Office.”

“The pandemic has given Americans a refresher course in federalism, reminding us of the central importance of governors, even if Washington made many of the most consequential decisions, like spurring vaccine development. But it is also testing American attitudes about whether elected officials or infectious-disease experts should call the shots…”

“Politicians get the last word for the same reason the Constitution anoints the president commander in chief and reserves the power to declare war for Congress — they’re directly accountable to the voters. The experts are not.”

“The Senate Judiciary Committee advanced the selection of Andre Mathis to be a judge on the Sixth Circuit Court of Appeals by a 12-10 vote despite the fact his home-state senators, Tennessee GOP Sens. Marsha Blackburn and Bill Hagerty, oppose his nomination,” Politico reports.

“It’s the first time a circuit court nomination has advanced without the return of a ‘blue slip’ — a committee tradition that allowed home state senators to effectively block nominations — during the Biden administration. Republicans effectively threw the staple out the window during the Trump administration, confirming 17 circuit court picks over the objections of home-state senators.”

“A Florida collectibles dealer connected to the federal investigation into Rep. Matt Gaetz formally entered a guilty plea in Orlando on Wednesday, marking another twist in the ongoing probe into the Republican congressman,” Politico reports.

“Joe Ellicott, known as ‘Big Joe,’ pleaded guilty in federal court to conspiracy to commit fraud and drug charges and has agreed to cooperate with federal authorities.”

“A team of scholars, faith leaders and advocates unveiled an exhaustive new report that documents in painstaking detail the role Christian nationalism played in the Jan. 6 attack on the U.S. Capitol and calling it an unsettling preview of things to come,” the Religion News Service reports.

“Chris Cuomo isn’t backing down in his battle with CNN following the ouster of his boss Jeff Zucker — the anchor intends to demand as much as a $60 million settlement,” the New York Post reports.

MyPillow CEO Mike Lindell suggested that “we should get our cyber guys” to take over a broadcast of Fox News’s Hannity to air “evidence” of voter fraud in the 2020 presidential election.

“Former New York Gov. Andrew Cuomo will file a complaint against state Attorney General Tish James with the judicial entity that has the power to disbar lawyers,” Politico reports.

Oklahoma Republicans have introduced a bill in the legislature to create a government-run database that tracks pregnant women considering abortions, the HuffPost reports. That’s literally straight out of the Handmaids’ Tale.

“A supporter of former President Donald Trump who wanted to root out voter fraud is among five people who was charged Thursday with election fraud by a Republican district attorney who’s running for Wisconsin attorney general,” the AP reports.

A deputy attorney general overseeing election issues in Virginia has resigned amid questions over posts she shared on Facebook praising the Capitol rioters and falsely claiming that Donald Trump won the 2020 election, the Washington Post reports.

“Emmanuel Macron has announced a ‘renaissance’ for the French nuclear industry with a vast program to build as many as 14 new reactors, arguing that it would help end the country’s reliance on fossil fuels and make France carbon neutral by 2050,” The Guardian reports.

“Boris Johnson is expected to be among 50 people in Downing Street who will be questioned by police over lockdown-breaching parties,” the Times of London reports.

“The prime minister attended six of the events. They included a ‘bring your own booze’ No 10 garden party, a gathering to celebrate his 56th birthday in the Cabinet Room and an alleged party in his flat to celebrate the departure of Dominic Cummings, who was his chief adviser. He also attended three leaving parties.”

“The prime minister will effectively declare the end of the pandemic in two weeks, scrapping compulsory isolation for people with Covid-19 and starting the winding-down of free tests,” the Times of London reports.

“The move will be part of a ‘strategy for living with Covid,’ to be published on February 21.”