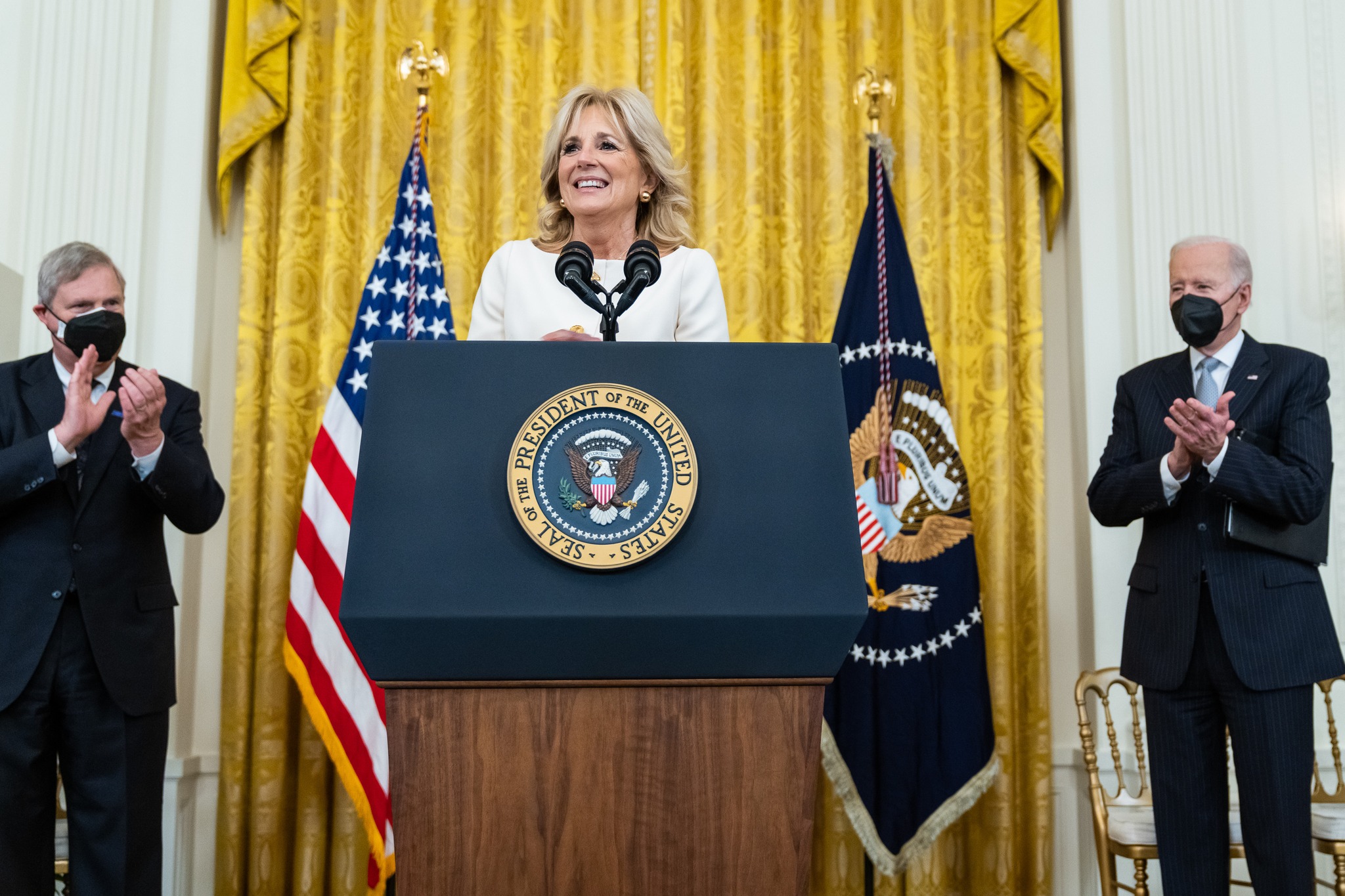 Sen. Jon Tester (D-MT) criticized fellow Democrats in a CNN interview for not appealing to Middle America more and said Democrats need to “show up” in those places if they want to win elections.

Said Tester: “I honestly don’t think the Democratic Party can be a majority party unless we start appealing to Middle America a lot more. I’m talking about the area between the two mountain ranges, the Appalachians and the Rocky Mountains. And if we’re able to do that, I think it will provide success.”

What do you mean by that? Do you mean that we need to craft rural specific policies? Or do we need to trash the suburbs and cities (I think this is what people mean when they say bullshit like this)?

Arrington launched a bid on Tuesday blasting the incumbent as a “sellout” who “sold out the Lowcountry” and “sold out President Trump” (theme emerging?) and is “more interested in becoming a mainstream media celebrity than fighting for the people she’s supposed to represent.”

But Mace fired back in withering style: “I at least partially have her 2018 loss in our District to thank” for the chance to serve in Congress. Yeah, so about that: Arrington, you perhaps recall, ran against Republican Rep. Mark Sanford that cycle, castigating him for—guess what—insufficient loyalty to Donald Trump. The attacks worked, as Arrington upset Sanford 51-47, a win that should have sent her on a smooth path to victory that November in South Carolina’s conservative 1st District.

Only it didn’t. Arrington learned the hard way that sometimes, there’s a price to pay for far-right Trump sycophancy. A wide range of issues plagued her campaign, including poor fundraising, the ongoing defection of suburban voters from the GOP, and a Democratic opponent of much higher quality than Republicans were used to encountering in the district—a sharp-witted attorney and ocean engineer named Joe Cunningham.

Cunningham seized on a grave stumble Arrington made during her primary battle with Sanford, when she expressed her support for Trump’s plan to allow offshore oil drilling in almost all of the country’s coastal waters—a proposal even many Republicans opposed. In the 1st District, which stretches along much of the state’s Atlantic shore, the idea was particularly unpopular, and Arrington soon tried to walk back her remarks. Cunningham relentlessly pounded her on the flip-flop, and his considerable financial advantage allowed him to go on the airwaves first and stay there while Arrington struggled to keep up.

The final result was one of the midterms’ most shocking, even with the elevated expectations many Democrats brought with them to election night. Cunningham defeated Arrington 51-49, despite the fact that Trump had carried the district 54-40 just two years earlier. In a bizarre concession speech, Arrington explicitly blamed Sanford and his supporters for her defeat, and even exhorted the congressman’s donors to ask that their contributions be refunded while pledging to seek a rematch in 2020.

Unfortunately for Cunningham, he wasn’t lucky enough to face Arrington again, as she instead took a job in Trump’s Defense Department. Instead, he wound up running against another state representative—Mace—who had the good sense to oppose offshore drilling from day one. Amid a less favorable political environment for Democrats, Cunningham lost 51-49. (He’s now running for governor.)

Arrington’s tenure at the Pentagon didn’t work out particularly well, though: She was suspended from her job last year after being accused of disclosing classified materials without permission and resigned a day prior to launching her campaign.

Thanks to the GOP’s intervention on Mace’s behalf, the 1st is indeed now redder: Under the old lines, it voted for Trump by a 52-46 margin, but now it would have gone for Trump 54-45. As a consequence, national Democrats aren’t likely to make a concerted effort to flip this district, though one candidate, pediatrician Annie Andrews, just reported raising almost half a million dollars in her first two months in the race. Of course, the lead-footed Arrington managed to put this seat in play once before with an unexpected primary win. Perhaps she’ll do so again.

GEORGIA 9TH CD. Former FBI agent and University of Georgia football player Ben Souther has launched a primary challenge to Republican Rep. Andrew Clyde, specifically citing the fact that Clyde does not live in Georgia’s dark-red 9th District. When Republican legislators drew the state’s new congressional map, they placed Clyde’s home county of Jackson into the 10th District—a move he claims was “a purposeful decision made by a handful of establishment politicians” to target him for being a “hardcore conservative.” He nevertheless said he’ll continue to run in the 9th, though it doesn’t appear that he plans to relocate.

GEORGIA 10TH CD. As expected, Donald Trump has given his backing to former state Rep. Vernon Jones’ brand-new bid for Congress, an enticement Trump reportedly dangled to encourage Jones to drop his campaign for governor in order to boost the prospects of former Sen. David Perdue, another Trump favorite.

NEW YORK 23RD CD. Republican Rep. Claudia Tenney on Wednesday publicized an endorsement from Donald Trump in her bid for the new 23rd Congressional District, a constituency in southwestern upstate New York that would have backed Trump 59-39. Only 9% of the seat’s residents live within the boundaries of Tenney’s existing 22nd District, but the congresswoman doesn’t currently face any serious opposition in the June primary.

GEORGIA 7TH CD. The Atlanta Journal-Constitution reports that Protect Our Future, a new super PAC co-founded by crypto billionaire Sam Bankman-Fried, plans to spend $2 million to aid Rep. Lucy McBath in her battle in the May Democratic primary against fellow Rep. Carolyn Bourdeaux.

TEXAS 35TH CD. Austin City Councilman Greg Casar is running his first TV ad ahead of the March 1 Democratic primary, which his campaign says is backed by a “six-figure” buy. In the spot, Casar touts his accomplishments in office, including passing paid sick leave, raising the minimum wage, and protecting a Planned Parenthood clinic from closure at the hands of Republicans. He then describes his priorities for Congress: “Expanding Medicare to every Texan, fixing our power grid, and tackling the climate crisis.”

TEXAS 28TH CD. Democratic Rep. Henry Cuellar doesn’t refer to his opponent in next month’s primary, Jessica Cisneros, in his new ad, nor does he mention the federal investigation he’s apparently a target of. But he does talk about the importance of bipartisanship and, without any hint of irony, “fully funding law enforcement.” No doubt the FBI will be glad to know that the man whose home they raided last month has helped ensure they have the resources they needed to do so.

Perry ran for the city’s top job in 2013 and ultimately placed fourth in the nonpartisan primary with 16%. She went on to endorse Eric Garcetti in the second round, who named her head of his administration’s Economic Development Department following his victory. Perry stepped down in 2018 and ran for a seat on the Los Angeles County Board of Supervisors two years later, but she took a distant third with just 12%.

CALIFORNIA 6TH CD. California-based data analyst Rob Pyers flags that Courtney Bailey-Kanelos, the registrar of voters in Sacramento County, has filed paperwork for a possible bid in the redrawn 6th Congressional District, a solidly blue seat where Democratic Rep. Ami Bera will seek re-election. Bailey-Kanelos, a registered independent, does not appear to have commented publicly.

NEVADA ATTORNEY GENERAL. Tisha Black, whom the Nevada Independent says is a recent head of “the state’s premier cannabis industry trade group,” on Monday became the second Republican to launch a bid against Democratic incumbent Aaron Ford in what will be a closely watched race for state attorney general. Ford already faced opposition from Sigal Chattah, an attorney who has sued to try to undermine the state’s pandemic measures and who has insisted that the attorney general has done a poor job investigating voter fraud allegations. Black, who unsuccessfully ran for a seat on the Clark County Commission in 2018, also launched her bid by decrying “unnecessary” mask mandates and “soft on crime legislation.”

Ford won this post by a narrow 47.2-46.8 margin during the 2018 blue wave, a victory that made him the first Black person elected to statewide office in Nevada. Ford ended 2021 with a huge $1.5 million to $335,000 cash-on-hand lead over Chattah, but there’s little question that national Republicans will spend heavily in this swing state at a time when AG races are attracting more and more outside interest. As the Associated Press detailed this week, Republicans are looking to put into power attorneys general who would empower Donald Trump’s election lies. Indeed, an arm of the Republican Attorneys General Association, which spends millions in AG races, called the Rule of Law Defense Fund promoted the infamous rally that came just before the Jan. 6 attack.

Before Republicans can focus on Ford, though, they have a messy June primary to sort out. While Black didn’t mention Chattah in her launch, Chattah labeled her new foe a “progressive plant” who has donated to Democrats in the past.

WISCONSIN GOVERNOR. State Rep. Tim Ramthun, who is one of the Big Lie’s biggest promoters in Wisconsin, tells Rolling Stone that he’s thinking about entering the Republican primary for governor, and WISC-TV says that “an advertisement circulating online for Kewaskum High School promises he has a ‘special announcement’ to come this weekend.” Ramthun claims that Donald Trump contacted him in early December and offered to endorse him in a future election, though it’s not clear if this would apply to the race to take on Democratic Gov. Tony Evers.

Kansas State Sen. Mark Steffen (R) “appears to have admitted he traded his vote on the Kansas congressional redistricting map in order to advance a bill that would end a health board investigation into the physician-politician,” the Topeka Capital Journal reports.

“Steffen was one of two Republican senators who switched their vote on the redistricting map veto after the Senate Public Health and Welfare Committee fast-tracked the COVID measure in a ‘gut and go’ bill.”

When asked why he switched his vote, Steffen said: “Well, I did that to make some progress on some other fronts. Sometimes that’s the way politics works.”

Former Sen. Al Franken (D-MN) told the Washington Post “it would be tempting” to run for office again.

Said Franken: “I certainly loved my time in the Senate. I loved the job. I got a lot done. I was able to accomplish things I couldn’t accomplish anywhere else, I don’t think. So, yeah, it would be tempting to try to do that again.”