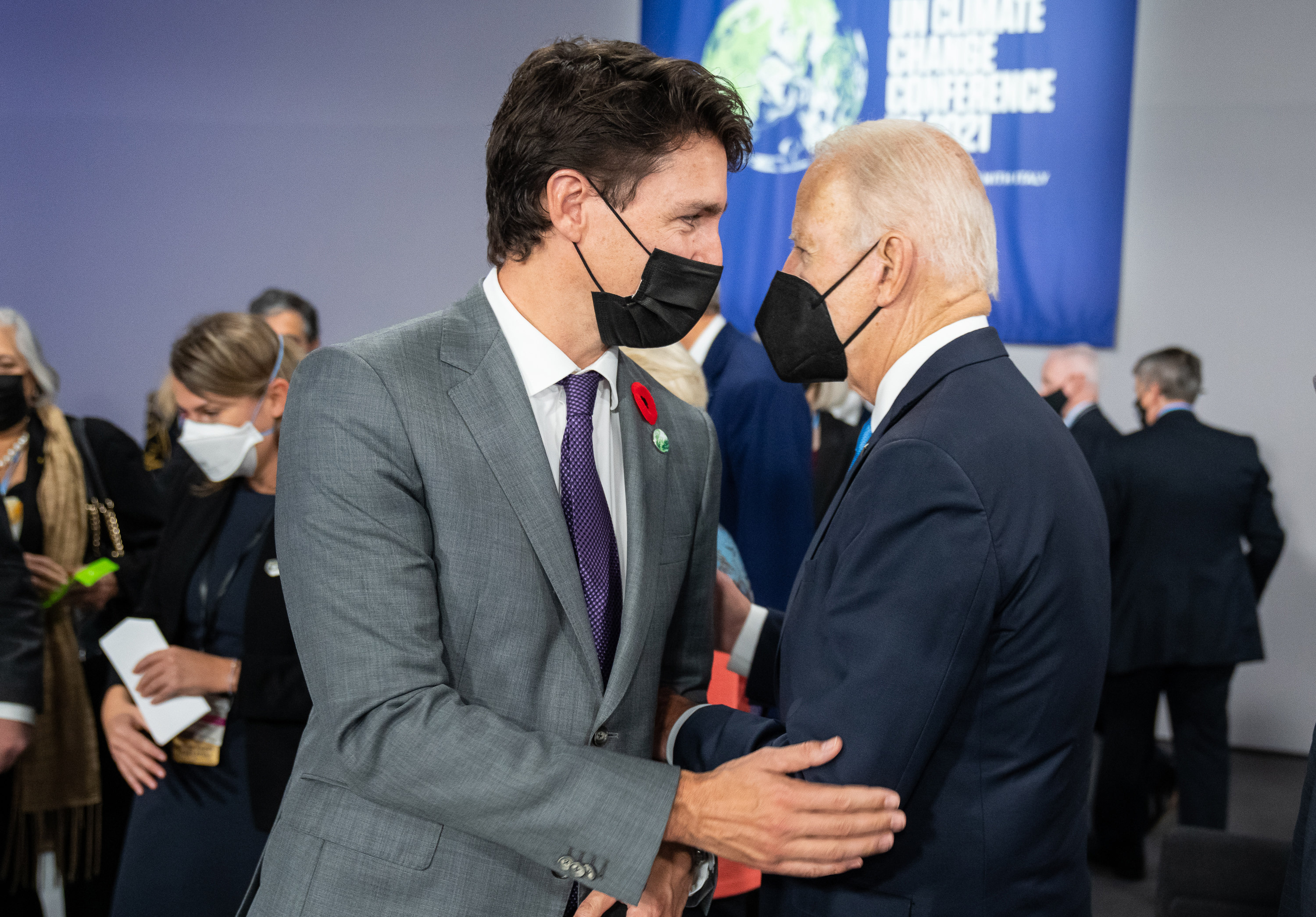 CNN: “The legislation ends the use of forced arbitration clauses for sexual harassment and assault claims. According to lawmakers, more than 60 million Americans are subjected to these provisions in employment contracts.”

Politico: “Senate Majority Leader Chuck Schumer vowed in December that the chamber will ‘vote on a revised version of the House-passed Build Back Better Act — and we will keep voting on it until we get something done.’ That’s not the strategy at the moment.”

“Instead, the Senate is now in a long cooling-off period. Democrats are turning to fixing the Postal Service, sexual misconduct reform, spending bills, a Supreme Court vacancy, the Violence Against Women Act and possibly changing the Electoral Count Act and sanctioning Russia. Dealing with those items could take a couple of months or longer, pushing the Senate closer and closer to the midterms. Most Democrats concede they could not revive a tax and spending bill before April, and the final deadline is Sept. 30, when Democrats’ existing powers to push the defunct bill past a filibuster expire.”

“Both senators — and their staffs — quietly question whether the other side can be trusted.”

“By the time the Senate was considering the Build Back Better agenda, the mutual suspicion had metastasized and the two senators felt they needed to commit their positions in writing. They both signed a July agreement that became public in September, capping Manchin’s spending at $1.5 trillion.”

“While the mere existence of such a unique document befuddled fellow senators, the implication was clear: doubt and distrust ran high in their relationship.”

The National Archives discovered what it believed was classified information in documents Donald Trump had taken with him from the White House as he left office, the New York Times reports.

“The chairwoman of the House Oversight Committee is moving quickly on her promise to investigate Donald Trump’s handling of White House records on the heels of revelations that 15 boxes of materials were recovered from the former president’s Mar-a-Lago residence,” the Washington Post reports.

A must-read coming this fall: Confidence Man: The Making of Donald Trump and the Breaking of America by Maggie Haberman. One early scoop from the book via Axios: “While President Trump was in office, staff in the White House residence periodically discovered wads of printed paper clogging a toilet — and believed the president had flushed pieces of paper.”

Also interesting: “This is the book Trump fears most… Several advisers were unhappy about his decision to talk to her as part of his marathon conversations with book authors at Mar-a-Lago. But they concluded he couldn’t help himself and couldn’t be stopped.”

Former Trump communications director Alyssa Farah told The View that Donald Trump is “terrified” of a forthcoming book by New York Times reporter Maggie Haberman. Said Farah: “There is quite a bit more to come.”

Trump responded to recent reports about his handling of White House records, saying he’s working with the National Archives “to help formally preserve the Trump Legacy,” The Hill reports. Said Trump: “The papers were given easily and without conflict and on a very friendly basis, which is different from the accounts being drawn up by the Fake News Media. In fact, it was viewed as routine and ‘no big deal.’”

Trump also pushed back against reports that documents were regularly found flushed down the toilet, calling the claim “categorically untrue and simply made up by a reporter in order to get publicity for a mostly fictitious book.”

U.S. inflation accelerated to a 7.5% annual rate in January, rising to a new four-decade high, the Wall Street Journal reports.

CNBC: “That marked the biggest gain since February 1982 and was even higher than the Wall Street estimate.”

“Continued strong consumer appetite for overseas goods pushed up the U.S. trade deficit in December, sending the full-year import-export gap to a record level in 2021,” the Wall Street Journal reports.

“It’s not every day that Canada becomes the red-hot center of a global protest movement,” Politico reports.

“But what started as a rally of Canadian truckers angry at cross-border vaccine mandates has fast become a magnet for far-right grievances around the world.”

More from Politico: “Canada’s truckers have paralyzed Ottawa and unsettled the country’s politics over vaccine and mask mandates. Now Americans want in on the action.”

“President Biden is facing the possibility of truck driver protests mirroring those in Canada over vaccine mandates that would come as the administration works to combat supply chain disruptions, vaccinate more Americans and strengthen the U.S. economy,” The Hill reports.

“The Department of Homeland Security (DHS) on Wednesday warned police partners of protests similar to those in Canada that it said could even disrupt the Super Bowl or the State of the Union address.”

“The House committee investigating the Jan. 6 attack on the Capitol has discovered gaps in official White House telephone logs from the day of the riot, finding few records of calls by President Donald Trump from critical hours when investigators know that he was making them,” the New York Times reports.

“Investigators have not uncovered evidence that any official records were tampered with or deleted, and it is well known that Mr. Trump used his personal cellphone, and those of his aides, routinely to talk with aides, congressional allies and outside confidants.”

“But the sparse call records are the latest major obstacle to the panel’s central mission: recreating what Mr. Trump was doing behind closed doors during crucial moments of the assault on Congress by a mob of his supporters.”

Rep. Marjorie Taylor Greene (R-GA) was mocked after ranting about the “gazpacho police” patrolling the U.S. Capitol on a podcast, The Guardian reports.

Said Greene: “Not only do we have the DC jail which is the DC gulag, but now we have Nancy Pelosi’s gazpacho police spying on members of Congress, spying on the legislative work that we do, spying on our staff and spying on American citizens.”

Los Angeles Mayor Eric Garcetti’s (D) onetime chief spokeswoman “has filed a complaint with local, state and federal prosecutors, demanding that he be prosecuted for perjury for repeatedly denying that he knew about another former aide’s alleged sexual misconduct,” the Los Angeles Times reports.  This is not the kind of headline you want while you’re awaiting Senate confirmation to be ambassador to India.

“Three of President Biden’s nominees to the Federal Reserve committed to lawmakers that, if confirmed to their posts, they would not work in financial services for four years after leaving the Fed,” the New York Times reports.

“The pledge comes amid growing concern about the revolving door between Washington and Wall Street.”

“The drama extends to their families. One candidate’s wife threatened to put critical journalists ‘in prison’ and disparaged sexual harassment victims, while her mother was convicted of forging a financial document. Another candidate’s wife used her husband’s aides to run her personal errands, while her son is under investigation regarding illegal gambling.”

President Biden will sit down with NBC News anchor Lester Holt for an exclusive interview as part of the network’s pregame coverage of the Super Bowl on Sunday, The Hill reports.

Former President Barack Obama will speak to the House Democratic caucus on Thursday, NBC News reports.  The private meeting is organized by Rep. Hakeem Jeffries (D-NY), the caucus chair, and is expected to take place virtually.

While addressing a roundtable of energy executives, President Biden asked: “Are you getting less resistance when you start talking about wind and the windmills? I know they cause cancer.”  As the table broke out in laughter, Biden declared it a “bad joke” and that he “shouldn’t kid about that.”

Kansas Gov. Laura Kelly (D) wants lawmakers to approve $1.3 billion in incentives to lure a $4 billion secret factory to the state in what would be the largest economic incentive package in state history, the Kansas City Star reports.

“But as the cost of landing the project comes into focus, other basic questions are still unanswered. The location of the plant and the company involved remain closely held as lawmakers and state officials adhere to confidentiality agreements. Details on how and when Kansas could gain financially are unknown.”

New York Times: “Mr. Prince’s role in the effort, which has not been previously disclosed, sheds further light on how a group of ultraconservative Republicans employed spycraft to try to manipulate the American political landscape. Mr. Prince — a former C.I.A. contractor who is best known as the founder of the private military firm Blackwater and whose sister, Betsy DeVos, was Mr. Trump’s education secretary — has drawn scrutiny over the years for Blackwater’s record of violence around the world and his subsequent ventures training and arming foreign forces.”

“His willingness to support Mr. Seddon’s operation is fresh evidence of his engagement in political espionage projects at home during a period when he was an informal adviser to Trump administration officials.”

Jonathan Bernstein: “Republicans continue to filibuster pretty much every judicial and executive-branch nomination. Democrats can overcome individual filibusters with a simple majority vote, but by forcing the Senate to spend maximum time with every nomination, Republicans are forcing them to choose which selections to prioritize, meaning that the relatively low-priority picks — for positions still important enough to merit Senate confirmation — are languishing.”

“Federal employees and military service members would receive average raises of 4.6 percent next January under the budget President Biden will propose in March, marking what would be the workforce’s largest salary hike in two decades,” the Washington Post reports.