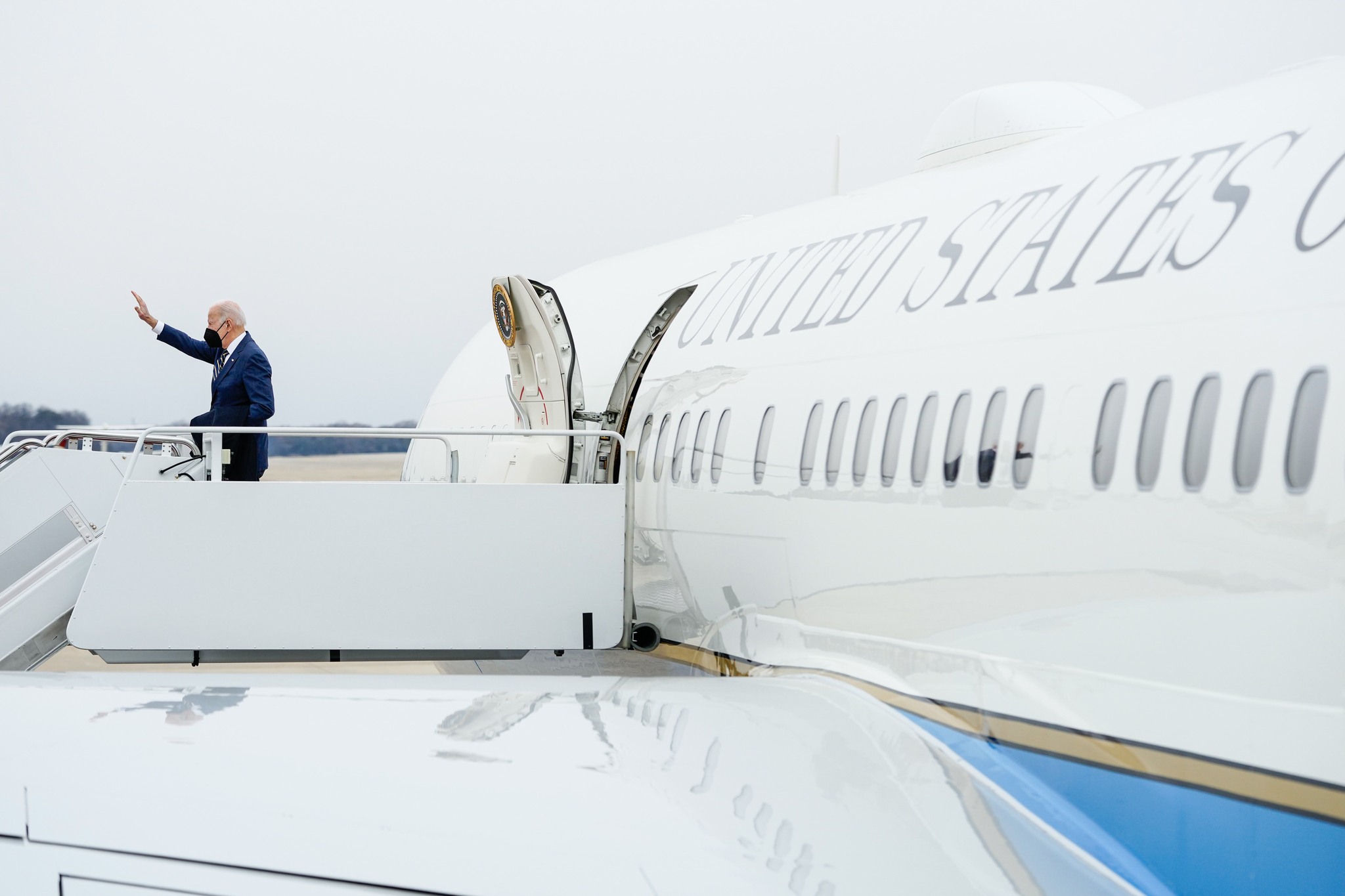 “The maps, drawn by Republican lawmakers late last year, would have given GOP candidates a sizable advantage in elections throughout the next decade. Republican leaders argued in favor of the maps in court, saying redistricting is an inherently political process and that courts shouldn’t get involved by banning partisan gerrymandering.”

“A pair of looming state court cases could significantly curtail mail voting ahead of the midterms — one of Republicans’ major goals since former President Donald Trump went to war against the practice in 2020,” Politico reports.

“The state Supreme Courts in Pennsylvania and Wisconsin are both hearing major voting cases after conservative victories in lower courts.”

Arizona House Speaker Rusty Bowers (R) is unilaterally quashing legislation that would have given lawmakers the power to reject election results, the Arizona Star reports.

“Miami-Dade Mayor Daniella Levine Cava is asking prosecutors to investigate claims of ‘voter fraud’ after elderly residents in Little Havana said their party affiliations were changed without their knowledge,” the Miami Herald reports.

Daily Beast: “There are a few key reasons why the twice-impeached former president hasn’t yet endorsed Mandel or anybody else in that race. One reason for the hold-up is that Trump—who has long been addicted to dishing tabloid-style gossip and dirt—has for months told people close to him that he thinks Mandel is a charisma-free weirdo and dork, according to three sources who’ve spoken to Trump about Mandel and the Ohio contest since last year.”

“In recent months, these sources said, the onetime leader of the free world has even spent an inordinate amount of time gossiping with a large array of advisers and close associates about unconfirmed details of Mandel’s sex life. Trump has privately regurgitated, often in disgust, a wide range of unverified, often completely unvetted, and lurid rumors about the MAGA candidate.”

Former Rhode Island Department of Health Director Nicole Alexander-Scott said Wednesday that she would not run in the Democratic primary for this open seat.

State Rep. Teresa Tanzi said Thursday that she would not compete in the September Democratic primary for this open seat.

NEW YORK 23RD CD. Former state Sen. Cathy Young said Wednesday that she would not seek the Republican nod for any seat in Congress this cycle.

INDIANA 9TH CD. State Rep. J. Michael Davisson declared Tuesday that he was joining the May Republican primary for this very red open seat. Davisson, an Army veteran who served in Afghanistan and Iraq, was appointed to the legislature last fall to succeed his late father, and this appears to be his first run for office. Indiana’s filing deadline is on Feb. 4, so the field will take final shape before long.

MICHIGAN 11TH CD. Rep. Haley Stevens has released an internal poll from Impact Research that gives her a 42-35 lead over fellow incumbent Andy Levin in their August Democratic primary, the first numbers we’ve seen of the race.

Stevens outraised Andy Levin $627,000 to $335,000 in this blue district in the Detroit suburbs, and also has much more money to spend: $2.6 million versus $1.3 million. In addition, Stevens represents 45% of the district while Levin represents 25%. Levin could still change course and run in the open 10th—a much swingier seat, but one he already represents two-thirds of. A recent Stevens internal showed her up 7 points.

NEW MEXICO 2ND CD. Democrats passed a new congressional map that transforms freshman Republican Rep. Yvette Herrell’s 2nd District in the southern part of the state from a 55-43 Trump constituency into a district that Joe Biden would have carried 52-46, and two Democrats are competing to take her on. Las Cruces City Councilor Gabe Vasquez raised $155,000 during the final quarter of 2021 and ended the year with $150,000 to spend, while physician Darshan Patel does not appear to have filed with the FEC. Herrell herself took in $300,000 and had $1.1 million on-hand.

NEW MEXICO 3RD CD. While some Democrats feared that freshman Rep. Teresa Leger Fernandez could face a serious opponent after redistricting dropped Joe Biden’s margin in her northern New Mexico seat from 58-40 to 54-44, she appears to have avoided any major opposition. The two Republicans to file were oil and gas engineer Alexis Martinez Johnson and farmer Jerald Steve McFall, and neither of them have reported raising any money so far.

GEORGIA 7TH CD. Lucy McBath beat out Carolyn Bourdeaux $736,000 to $400,000 and had $3.2 million on-hand versus $2.4 million in this safely blue seat in the Atlanta suburbs. A third candidate in the Democratic primary, state Rep. Donna McLeod, raised just $22,0000. Bourdeaux represents 57% of the district and McBath just 12%. The primary is May 24, with a June 21 runoff if no one takes a majority. Polling for McBath and her allies has found her leading by about 10 to 20 points.

ILLINOIS 6TH CD. Sean Casten more than doubled up fellow Democrat Marie Newman, taking in $699,000 to her $337,000. He also has almost twice the bankroll: $1.9 million to $1 million for Newman. But Newman represents 41% of this solidly blue seat in the Chicago area while Casten represents 23%. However, she also faces an ethics investigation into charges she sought to keep a potential primary opponent out of the race when she ran in 2020 by offering him a job as a top aide if she won. The two will face off on June 28.

ILLINOIS 15TH CD. Rodney Davis, the more moderate of the two Republicans running in this deep red district in central Illinois, raised $410,000 compared to $164,000 for Mary Miller, who has Trump’s endorsement. Davis also has $1.8 million saved up while Miller had just $783,000 at her disposal. Both are encountering a lot of new turf, though: Miller represents 31% of the new district and Davis 28%.

MICHIGAN 4TH CD. This matchup hasn’t yet firmed up: Bill Huizenga, a Trump loyalist, has said he’ll seek re-election in this red-tilting district in southwestern Michigan, but Fred Upton, who voted for impeachment, has yet to announce his plans. Upton certainly keeps bringing in the bucks like he expects to run again, though: He raised $719,000 to Huizenga’s $396,000 and has a $1.6 million to $1.2 million cash edge. A third candidate, state Rep. Steve Carra, recently switched districts to run here but raised just $129,000. However, Trump did endorse him when he was running one-on-one against Upton, who represents 64% of this seat; Huizenga represents 25%. The primary is not until Aug. 2.

NORTH CAROLINA 11TH CD. This solidly red district in the Greensboro region is the only one that’s lumped together members of opposite parties: Democrat Kathy Manning, who raised $280,000 and had $1.1 million left over, and Republican Virginia Foxx, who took in $231,000 and finished with $957,000 in her war chest. Manning represents 42% of the redrawn 11th and Foxx 30%, but it would have voted 57-42 for Trump, making Foxx the overwhelming favorite. Manning, however, hasn’t yet said whether she’ll seek re-election, likely because a lawsuit challenging the GOP’s new map is pending before the state Supreme Court.

“De Blasio, a lifelong Democrat, would challenge former Rep. Max Rose in a June primary if he decides to jump into the race. The victor will likely face incumbent Nicole Malliotakis, whose advantage in a district that supported Donald Trump in 2020 was diminished by new district lines released this week that swap out swing areas in Southern Brooklyn with more progressive neighborhoods.”

NEBRASKA GOVERNOR. The Nebraska Examiner has collected all the 2021 fundraising numbers for the Republicans competing in the May primary to succeed termed-out Gov. Pete Ricketts:

Amusingly, Ricketts, who poured $12 million of his money into his unsuccessful 2006 campaign against Democratic Sen. Ben Nelson, pooh-poohed Herbster’s personal investment to the Examiner, saying that self-funding looks like “you’re trying to buy the race.” Ricketts, who is backing Pillen, added, “You want to engage Nebraskans across the state to invest in your campaign. And clearly Charles Herbster is not getting Nebraskans to invest in his campaign.”

OKLAHOMA GOVERNOR. Republican Gov. Kevin Stitt outraised Superintendent of Public Instruction Joy Hofmeister, a Republican-turned-Democrat, $1.2 million to $540,000 during the fourth quarter, and he ended 2021 with a $2.3 million to $435,000 cash-on-hand lead.

TEXAS 8TH CD. The March 1 Republican primary to succeed retiring Rep. Kevin Brady has turned into what the Texas Tribune’s Patrick Svitek characterizes as an expensive “proxy war” between retired Navy SEAL Morgan Luttrell, who has the House GOP leadership in his corner, and Christian Collins, a former Brady campaign manager backed by Sen. Ted Cruz and his allies in the nihilistic House Freedom Caucus.

Luttrell far outraised Collins during the fourth quarter, $1.2 million to $335,000, and ended 2021 with a $1.6 million to $290,000 cash-on-hand lead. Collins, however, is getting some serious reinforcements: Svitek reports that three super PACs almost entirely funded by a Cruz ally, banker Robert Marling, have spent $800,000 for Collins while Luttrell has yet to benefit from any outside money.

The story notes that the two leading candidates for this safely red suburban Houston district don’t seem to actually disagree on anything substantive, but Collins has been trying hard to frame the race as a battle between D.C. power players and “those who are the tip of the spear.” He’s also been seeking to use Luttrell’s connections against him, including the $5,000 donation the SEAL veteran received from the PAC of Illinois Rep. Adam Kinzinger, who voted to impeach Donald Trump. Luttrell distanced himself from the congressman in January, saying he “didn’t know the check was cashed,” but a Kinzinger spokesperson told the Tribune that the donation was made “because it was solicited.”

Luttrell, who is a close ally of former Gov. Rick Perry, has been focusing far more on his own military background, with his first ad talking about his recovery after a devastating helicopter crash. Luttrell also enjoys the backing of Lt. Gov. Dan Patrick, who is one of the most powerful far-right politicians in Texas, as well as 13th District Rep. Ronny Jackson, who was Trump’s failed nominee for secretary of veteran’s affairs in 2018. Nine other candidates are on the ballot, and while none of them have attracted much attention, they could keep Luttrell or Collins from winning the majority of the vote needed to avert a runoff.

LOS ANGELES MAYOR. Los Angeles Magazine has summarized fundraising reports spanning the second half of 2021, which show Rep. Karen Bass went into the new year with a sizable financial edge over her many opponents in the June nonpartisan primary to lead this very blue city:

Perhaps the biggest question looming over the race ahead of the Feb. 12 filing deadline is whether real estate developer Rick Caruso, who has flirted with running before, gets in this time. Caruso recently changed his voter registration from unaffiliated to Democratic, a move that came almost a decade after he left the GOP. The developer now describes himself as a “pro-centrist, pro-jobs, pro-public safety Democrat.”

ILLINOIS 3RD CD. State Rep. Delia Ramirez has picked up the support of the Illinois Federation of Teachers in the June Democratic primary for this safely blue open seat. Ramirez’s main intra-party opponent is Chicago Alderman Gilbert Villegas, who outraised her $385,000 to $115,000 during the fourth quarter of 2021 (the first in the race for both candidates) and ended December with a $375,000 to $110,000 cash-on-hand.

MICHIGAN 10TH CD. Eric Esshaki, who was the 2020 Republican nominee in the old 11th District, announced Thursday that he was dropping out of the August primary for the new (and open) 10th District and would instead endorse two-time Senate nominee John James. James, who launched his House bid on Monday, currently is the only notable Republican seeking this suburban Detroit seat, which Donald Trump would have carried 50-49.

OREGON 6TH CD. Carrick Flynn, who has worked as a University of Oxford associate researcher, announced Tuesday that he was entering the Democratic primary for Oregon’s brand-new 6th District. Flynn filed FEC paperwork on Jan. 21 and said he had $430,000 banked after 10 days.

TEXAS 15TH CD. Insurance agent Monica De La Cruz’s newest TV ad for the March 1 Republican primary features her flying over the border with Mexico as she bemoans how “socialists are ruining our border security, our values, and our economy.” She concludes by pledging to “finish what Trump started.”