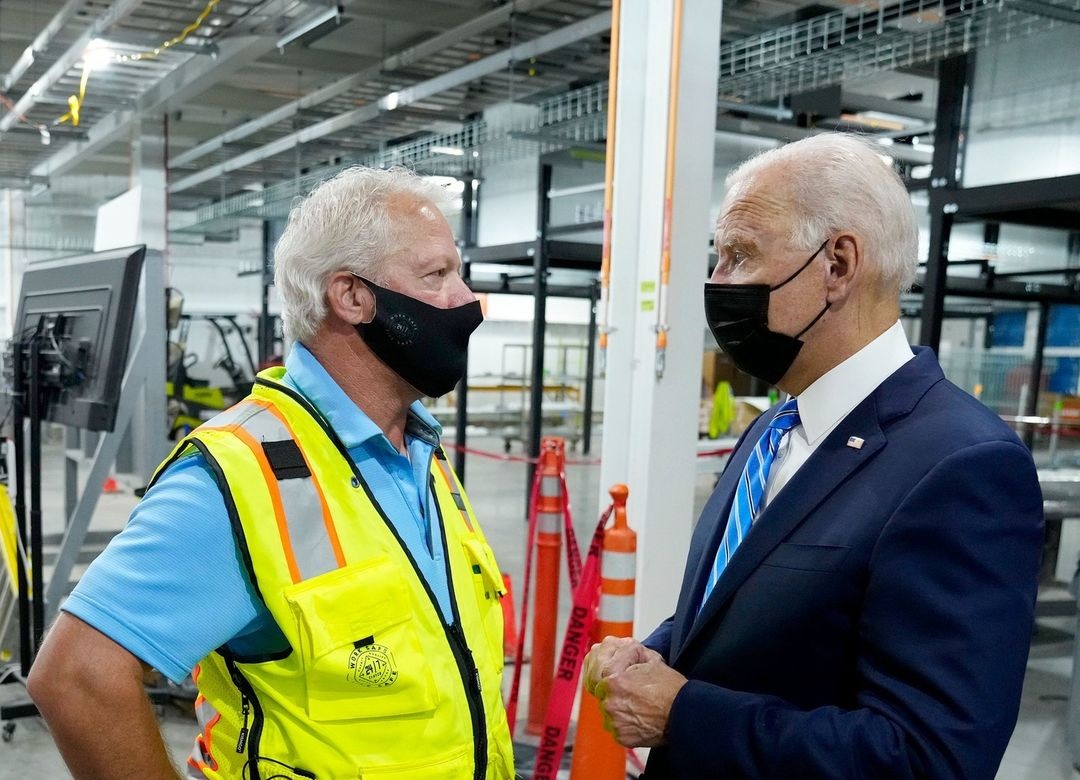 A new Suffolk University/USA Today poll in Florida finds just 39% of voters approve of the job President Biden is doing, while 53% disapprove.

By a 30 point margin – 58%-28% – the poll says voters in Florida believe the nation as a whole is on the wrong track, and a full 57% disapprove of the president’s handling of the economy.

NBC News: “Biden’s poll numbers are slumping amid a pandemic he has been unable to quash, and his party faces a wipeout in the midterm elections that could doom his legislative agenda for the rest of his term.”

“Yet the White House is privately telling its most loyal supporters that it sees a way for Biden to reverse course: by focusing more on what he has achieved thus far, rather than on what remains unfinished.”

“The war chest he has stockpiled is unprecedented for a former President and underscores his financial dominance in Republican politics more than a year after leaving the White House and in the midst of a critical midterm cycle.”

That’s more than double the cash on hand of the Republican National Committee itself.

“The Senate Republicans’ campaign and fundraising arm is launching a new podcast — with Donald Trump as its debut guest and donor lure,” Axios reports.

“Sen. Kyrsten Sinema had her best fundraising quarter since her election, bringing in nearly $1.6 million in the last three months of 2021 as she positioned herself as one of her party’s high-profile contrarians in the Senate,” Politico reports.

“But underneath that record number is a starker reality for the Arizona Democrat. Sinema is increasingly leaning on corporate PACs and big donations to fill her campaign coffers. The Democratic grassroots fundraising world has largely abandoned her.”

Sen. Ted Cruz (R-TX) “has never really danced around his ambition — including now that his party is in a holding pattern waiting to see whether former President Donald Trump runs again,” NBC News reports.

Said someone close to Cruz: “I don’t think he would run against Trump. I don’t know that Trump’s going to run. But if Trump doesn’t run, I’m quite certain he will run.”

“Major Republican organizations focused on winning back control of the House and the Senate ended last year with significantly more money than their Democratic counterparts, a reversal of past fortunes that suggests shifting momentum ahead of the midterm elections,” the Washington Post reports.

“The new fundraising totals, revealed Monday in filings to the Federal Election Commission, showed both parties holding record amounts for the off-year of the congressional cycle. But the growth in the Republican cash hoard compared with the 2020 and 2018 cycles outstripped Democratic gains, as GOP donors, particularly those who give seven- and eight-figure checks, leaned into the effort to take back control of the House and the Senate this fall.”

“The money advantage has the potential to play a decisive role in closely watched House and Senate primary contests this midterm year. And the lack of it can spell trouble for a number of candidates Trump has endorsed out of personal affinity, or simply a hatred of the more moderate Republicans they’re looking to unseat.”

Two candidates for state office in Michigan, both Republicans, “encouraged supporters to interfere with election processes, and come armed to polling places, in a recent joint appearance,” Deadline Detroit reports.

Said gubernatorial candidate Ryan Kelley (R): “If you see something you don’t like happening with the machines, unplug it from the wall.”

State Senate candidate Mike Detmer (R) went further, advising the audience to be prepared to “lock and load… So you ask, ‘what can we do?’ Show up armed… Make sure that justice prevails.”

Michigan gubernatorial candidate Garrett Soldano (R) said in a radio interview that we must “inspire women” who have been raped to understand how heroic they are in giving birth and see that “God put them in this moment.”

“Democratic National Committee Chair Jaime Harrison is frustrated, isolated and trapped in a job he long thought he wanted, according to party insiders, a dynamic driven by escalating tensions with the White House over his role,” NBC News reports.

“Key decisions for the committee are made by White House Deputy Chief of Staff Jen O’Malley Dillon, who speaks frequently with other DNC officials but only about three times a month by Zoom with Harrison. The limits of his influence are a source of agitation for Harrison.”

“The 10th District, newly created through redistricting, includes a chunk of Macomb County and a small portion of Oakland County and is considered competitive.”

“Nancy Pelosi’s decision to seek an 18th full term has added a new angle to Republican efforts to win back the House: tying swing-state Democrats to an even bigger Democratic bogeywoman than President Biden,” Axios reports.

The NRCC has already run several ads featuring the speaker, including those against embattled Reps. Chris Pappas (D-NH) and Tom O’Halleran (D-AZ).

“Democratic state legislators in New York released a congressional redistricting map Sunday that redrew House lines to give Democrats as many as three more seats at a time when the party’s majority is in jeopardy,” the New York Times reports.

“The map made public Sunday would result in lines that would give Democrats 22 seats to four Republican ones. The New York delegation is currently 19 Democratic seats to eight seats for Republicans. The state lost a seat because of slow growth over the past 10 years.”

Charlie Cook: “My friends who are Democrats, particularly those of the more progressive variety, don’t seem to understand how deep they are in the political hole this year — and just how hard it might be to get out of it in 2024, particularly in the Senate.”

“Should Republicans net more than one seat this fall and retake the chamber, Democrats will have a tall order to get it back in 2024. They’ll be defending 23 seats to the GOP’s 10. Of the 23, three are in states Trump carried: Jon Tester in Montana, Sherrod Brown in Ohio, and Joe Manchin in West Virginia. Another five come from states that Biden won by 5 points or less. None of the 10 GOP seats up are in Biden states and only one, Rick Scott in Florida, is in a state that Trump won by 5 points or less.”

Maryland Gov. Larry Hogan (R) is warning Republicans in a Fox News interview against supporting former President Donald Trump for president again.    Said Hogan: “With America on the wrong path, the stakes are too high to double down on failure.”

Axios: “The hundreds of millions funneled to politically active nonprofits on both sides rival the war chests of national political parties themselves. But the groups operate independently, often run by people whose roles are opaque or unknown entirely and with sources of financing that will likely never be revealed.”