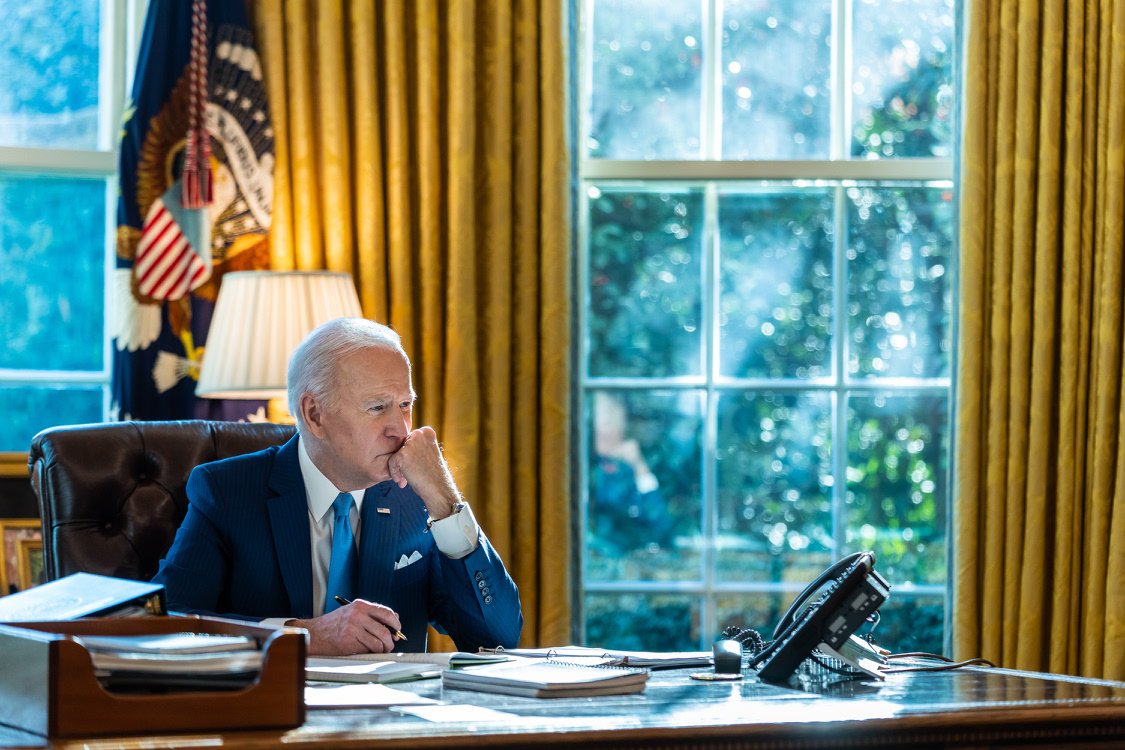 New accounts show that Donald Trump “was more directly involved than previously known in exploring proposals to use his national security agencies to seize voting machines as he grasped unsuccessfully for evidence of fraud that would help him reverse his defeat in the 2020 election,” the New York Times reports.

“The existence of proposals to use at least three federal departments to assist Mr. Trump’s attempt to stay in power has been publicly known. The proposals involving the Defense Department and the Department of Homeland Security were codified by advisers in the form of draft executive orders.”

“But the new accounts provide fresh insight into how the former president considered and to some degree pushed the plans, which would have taken the United States into uncharted territory by using federal authority to seize control of the voting systems run by states on baseless grounds of widespread voting fraud.”

“Former President Donald Trump’s advisers drafted two versions of an executive order to seize voting machines — one directing the Department of Defense to do so and another the Department of Homeland Security — as part of a broader effort to undermine the 2020 election results,” CNN reports.

“The House Jan. 6 committee is scrutinizing former President Donald Trump’s involvement in proposals to seize voting machines after the 2020 election, including efforts to create a legal basis for directing national security agencies to take such an extreme action,” the New York Times reports.

“It is not clear what evidence the committee is examining as it looks at any role Mr. Trump might have played in encouraging or facilitating the drafting of a so-called national security finding, a type of document more typically used as the basis for a presidential order to an intelligence agency to take covert action.”

“A document fitting that description circulated among Mr. Trump’s formal and informal advisers in the weeks following the election. It reflected baseless assertions about foreign interference in American voting systems that had been promoted most prominently by one of his outside lawyers, Sidney Powell.”

Senate Minority Leader Mitch McConnell (R-KY) again broke sharply with former President Donald Trump, telling reporters he would not support any reduced sentences for those who pled guilty in the January 6 attack on the Capitol, Axios reports.

Said McConnell: “I would not be in favor in shortening any of the sentences for any of the people who pleaded guilty to crimes.”

Russian President Vladimir Putin said that the United States and NATO had “ignored” Russian concerns in their responses to Kremlin demands, the New York Times reports.

Said Putin: “It was the United States that came with its missiles to our home, to the doorstep of our home. And you demand from me some guarantees. You should give us guarantees. You! And right away, right now.”

“The United States and its European allies appear on the cusp of restoring the deal that limited Iran’s nuclear program, Biden administration officials said on Monday, but cautioned that it is now up to the new government in Tehran to decide whether, after months of negotiations, it is willing to dismantle much of its nuclear production facilities in return for sanctions relief,” the New York Times reports.

The signatories of the Iran nuclear deal only have a “handful of weeks left” to strike a deal and usher in a mutual return to compliance with the agreement, CNBC reports.

Said a State Department official: “We are in the final stretch because as we’ve said now for some time this can’t go on forever because of Iran’s nuclear advancement.”

“A long-awaited report on parties in Downing Street during the pandemic dealt Prime Minister Boris Johnson a stinging blow on Monday, condemning him for failed leadership and painting a damning picture of “excessive” workplace drinking in the inner sanctum of the British government,” the New York Times reports.

“Mr. Johnson had hoped the release of the 11-page document would allow him to put a festering scandal over illicit parties behind him. But instead he was battered in Parliament, facing a new round of questions about his personal participation in social gatherings that appear to have violated lockdown rules meant to stop the spread of Covid-19.”

The Guardian says Johnson is now under pressure to release the full report.

“When the National Archives and Records Administration handed over a trove of documents to the House select committee investigating the Jan. 6 insurrection, some of the Trump White House records had been ripped up and then taped back together,“ the Washington Post reports.

“Former president Donald Trump was known inside the White House for his unusual and potentially unlawful habit of tearing presidential records into shreds and tossing them on the floor — creating a headache for records management analysts who meticulously used Scotch tape to piece together fragments of paper that were sometimes as small as confetti.”

When asked if he’s had any talks on the matter since December, he added: “No, no, no, no. It’s dead.”

Associated Press: “It’s no surprise that unusual steps are taken to protect any president. But the strict precautions could also threaten to undercut the Biden administration’s own efforts to tell Americans — especially those who are vaccinated and boosted — that they can get on with something closer to their normal lives in the face of the omicron wave.”

“And it’s emblematic of the messaging challenges surrounding the administration’s approach to Covid-19 as the virus becomes endemic, familiar and somewhat controlled but still menacing, with hard-to-follow guidelines often unevenly implemented.”

“For months, Biden aides have fretted that the people who are most protected against Covid-19 remain the most cautious, a dynamic they view as a drag on the nation’s economic and psychological recovery.”

“Coronavirus vaccines for children younger than 5 could be available far sooner than expected — perhaps by the end of February — under a plan that would lead to the potential authorization of a two-shot regimen in the coming weeks,” the Washington Post reports.

Wall Street Journal: “Federal authorities estimate that 987,456 more people have died since early 2020 than would have otherwise been expected, based on long-term trends. People killed by coronavirus infections account for the overwhelming majority of cases. Thousands more died from derivative causes, like disruptions in their healthcare and a spike in overdoses.”

“Covid-19 has left the same proportion of the population dead—about 0.3%—as did World War II, and in less time.”

“The New York Times filed a lawsuit against the U.S. State Department on Monday in an effort to obtain emails between Hunter Biden and officials with the Romanian embassy, blaming the department for failing to hand over the documents it had requested via Freedom of Information Act in a timely manner,” the New York Post reports.

Remember, when Republicans criticize the fact that the President is going to pick an African American woman judge, they are screaming that they are flaming racists and that their Klu Kux Klan hoods are at the cleaners.

A New York prosecutor in Oswego County “announced Monday that he will not bring criminal charges against Andrew Cuomo, after investigating an allegation of unwanted physical contact by the former Democratic governor,” CNN reports.  “Oakes is the fifth district attorney to decide not to prosecute Cuomo after looking into allegations outlined in a report by investigators hired by James’ office, which detailed allegations of harassment from 11 different women against the former New York Governor.”

A new poll in France shows Emmanuel Macron leading the presidential field with 24%, followed by Marine LePen and Valerie Pécresse tied at 17%. Eric Zemmour trails at 13% with others in single digits. The top two finishers go to a run off.

“Turkish President Recep Tayyip Erdogan replaced the head of the state statistics agency weeks after it reported record inflation,” the Wall Street Journal reports.  “The Turkish president has fired a series of senior officials who opposed his unorthodox approach in which he has insisted on cutting interest rates to spur economic growth despite rampant inflation.”

Axios: “Between 2015 and 2020, the world never saw more than two successful coup attempts in a year. But there have now been eight coups in the past 12 months — most recently in Burkina Faso, where soldiers seized power last Monday.”

A U.N. report says the Taliban and its allies “are believed to have killed scores of former Afghan officials, security force members and people who worked with the international military contingent since the U.S.-led pullout,” Reuters reports.

President Biden announced Monday he will inform Congress of his intention to designate Qatar as a major non-NATO ally “to reflect the importance of our relationship,” Axios reports.  The designation “provides foreign partners with certain benefits in the areas of defense trade and security cooperation.”

Rep. Thomas Massie (R-KY) tweeted a quote from a noted white supremacist Holocaust denier, while falsely attributing it to the French philosopher Voltaire, Haaretz reports.  The quote was actually first uttered by American neo-Nazi Kevin Alfred Strom, who in 2008 was convicted on child pornography charges. Massey used the quote in an attempt to criticize Dr. Anthony Fauci.

“Bernie Sanders is still encouraging liberal primary challengers to Kyrsten Sinema and Joe Manchin. The rest of the Democratic caucus is ready to move on and try to keep hold of their fragile majority,” Politico reports.  “Mere days after their two centrists’ high-profile refusal to change chamber rules in order to pass election reform, Democrats say there’s no more time for infighting in a 50-50 Senate.”

“A group of nearly 40 House Democrats are pressuring party leaders to speed up passage of a huge package of drug pricing reforms that they see as critical to hanging onto their majority this November,” Politico reports.

“Those Democrats — many in battleground districts — are anxious to revive the stalled measure, which was included in President Joe Biden’s social spending plan, given the party has vowed to tackle drug prices during the last several elections.”