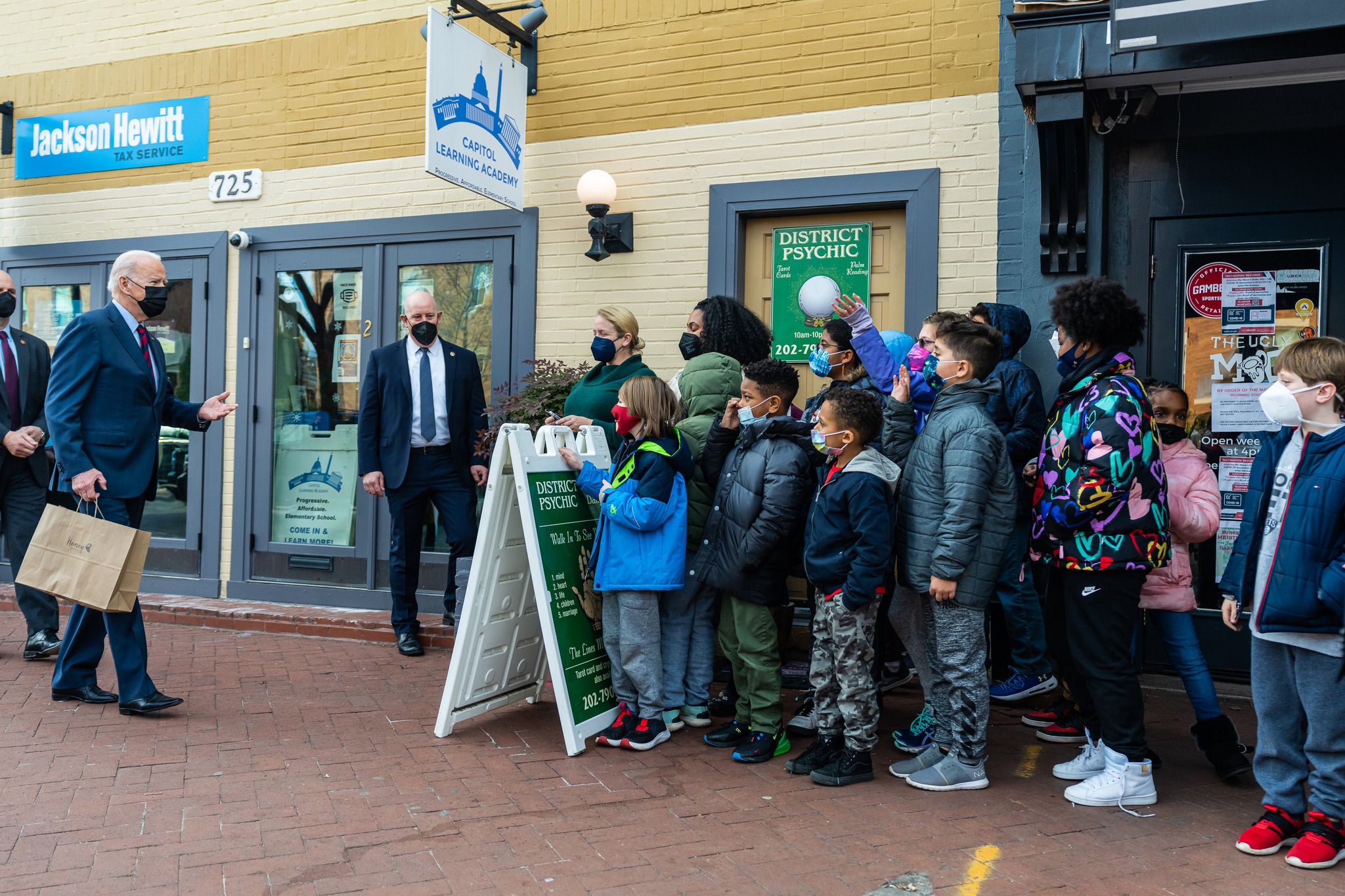 A new Monmouth poll finds 70% of Americans agree with the sentiment that “it’s time we accept that Covid is here to stay and we just need to get on with our lives” – including 78% of those who report having gotten Covid and 65% of those who say they have not been infected.

The main difference in the sense that it is time to move on is due to partisanship – ranging from 89% of Republicans and 71% of independents to 47% of Democrats.

Just 34% feel the country will get the outbreak under control and return to normal by the end of the year and 28% now believe a return to normalcy will never happen, which is up from 22% who felt this way in September and just 6% who were similarly pessimistic exactly a year ago.

“The Democratic National Committee announced it hit new fundraising highs, raking in $10.7 million in December and $157 million in 2021,” ABC News reports.  “Both figures are records for the committee in a non-presidential election year.”

On the Republican side, state House Minority Leader Blake Filippi also sounds unlikely to run. After Rhode Island Public Radio asked him if he was interested in running for any office other than the one he currently holds (the relevant portion begins at the 3:39 mark), Filippi responded that “crazier things have happened in the world, but at this point I anticipate running for re-election.”

TEXAS 38TH CD. Army veteran Wesley Hunt, who was the 2020 nominee in the old 7th District, has released a Moore Information poll that shows him in a dominant position ahead of the March 1 Republican primary for the new and safely red 38th. Hunt earns 54% of the vote, which is just above the majority he’d need to win outright, while former State Republican Executive Committee member Mark Ramsey is an extremely distant second with just 3%.

VIRGINIA 7TH CD. Both Del. Elizabeth Guzman and Prince William County School Board Chair Babur Lateef have announced that they won’t seek the Democratic nomination for the revamped 7th District, where Democratic Rep. Abigail Spanberger is campaigning for a third term. There was speculation last year that Spanberger, who only represents 24% of the redrawn seat, could be in for a serious intra-party fight, but Guzman and Lateef were the last notable names who appeared to be interested. This constituency would have favored Joe Biden 52-46, while Spanberger’s existing 7th supported him only 50-49.

NEBRASKA 1ST CD. Indicted Rep. Jeff Fortenberry has launched what appears to be his first TV ad ahead of the May Republican primary, and he wastes no time trying to stoke a xenophobic backlash against state Sen. Mike Flood. The narrator insists, “Joe Biden has created a dangerous crisis at our border and now illegal immigrants are flooding into America in record numbers. What is Mike Flood’s position on immigration?” (In case that pun was too subtle, the spot is titled “Flood of Illegals.”) The commercial then argues that the challenger shares Biden’s views and backs “giving taxpayer-funded tax credits to illegal immigrants,” though he doesn’t go into any detail.

The on-screen text, however, does cite a 2012 story from the Omaha World-Herald describing how then-Speaker Flood successfully pushed a bill through the unicameral legislature that would “restore taxpayer-funded prenatal care for” undocumented immigrants two years after the program was ended. The senator, who made his name as a leading anti-abortion legislator, argued, “The unborn child should not be punished for the actions of his or her parents,” adding, “We should protect the life of an unborn child whenever possible.”

However, Dave Heineman, who was governor at the time, very much did not see it that way when he asked rhetorically, “Why should illegal aliens receive millions of taxpayer dollars when those funds should be used for increased state aid to education?” The legislature ended up overriding Heineman’s veto, but he and Flood seem to have long ago put all this aside. Heineman joined Gov. Pete Ricketts earlier this month in endorsing Flood, with the ex-governor saying of the incumbent, “In modern political times in Nebraska, Jeff Fortenberry is the only Nebraska congressman that has ever been indicted on felony criminal charges.”

ILLINOIS 1ST CD. Construction contracting firm owner Jonathan Jackson announced Friday that he was joining the June Democratic primary bid to succeed retiring Rep. Bobby Rush in this safely blue seat. Jackson is the son of two-time presidential candidate Jesse Jackson and the younger brother of former Rep. Jesse Jackson Jr., who resigned from the neighboring 2nd District in 2012 and later was sentenced to 30 months in prison for spending campaign money on himself.

Meanwhile, Chicago Alderman Pat Dowell has the support of former Sen. Carol Moseley Braun, whose 1992 win made her the first Black woman to ever serve in the chamber.

MASSACHUSETTS GOVERNOR. Two mayors, one from each party, have each taken themselves out of the running for this year’s race for governor. Democrat Jon Mitchell of New Bedford, who in recent weeks has shown more of an interest in seeking the attorney general post, announced that he will not campaign for anything after all. A consultant for Republican Shaunna O’Connell of Taunton, meanwhile, also said she won’t be seeking the governorship.

MINNESOTA GOVERNOR and 2ND CD. While state Rep. Barb Haley was mentioned last year as a possible Republican candidate for governor or for the House, she’s instead announced that she’ll seek a promotion to the state Senate.

NORTH CAROLINA U.S. SENATOR and 7TH CD. Former Rep. Mark Walker announced Thursday evening that he would remain in the Senate race even though he’s badly fallen behind his two main Republican primary rivals, former Gov. Pat McCrory and Trump-backed Rep. Ted Budd, in both polling and fundraising. While Walker’s team claimed that Trump had offered to endorse him if he dropped down to the contest for the new 7th Congressional District, the former congressman instead used his Thursday rally to dramatically unveil a Walker for Senate bus. (The National Journal’s Kirk Bado responded, “Something tells me some folks at Mar-a-Lago will end up throwing Walker under that new bus…”)

4Q FUNDRAISING. The deadline for federal candidates to submit their fourth quarter fundraising totals is Jan. 31.

“Some of the executives who donated to his campaign also previously contributed to other Republican leaders’ political operations, including former President Donald Trump’s.”

OHIO 11TH CD. Former state Sen. Nina Turner announced Wednesday that she would seek a rematch against Rep. Shontel Brown, who defeated her in last year’s special election Democratic primary in a 50-45 upset. It’s not clear what the new version of this constituency will look like now that the state Supreme Court has struck down the GOP-drawn map as an illegal gerrymander, but there’s little question it will remain a safely blue Cleveland-based district.

Turner, who campaigned last time in a van emblazoned with the slogan “corporate Democrat want a puppet,” said she wasn’t trying to unseat the new incumbent because of her record. She instead argued, “I believe that I was the better candidate in 2021. And that has not changed.”

MICHIGAN 10TH CD. Warren City Councilwoman Angela Rogensues announced this week that she would campaign for the Democratic nomination in the new 10th District, a suburban Detroit seat that would have backed Donald Trump by a narrow 50-49 spread. Rogensues was elected to an at-large seat in 2019 in Michigan’s third-largest city, and Gov. Gretchen Whitmer appointed her last year to chair the board and executive committee of the Michigan Municipal Services Authority. She joins attorney Huwaida Arraf in the August primary.

TEXAS 15TH CD. VoteVets has thrown its support behind Ruben Ramirez, an Army veteran who twice unsuccessfully competed for the Democratic nomination in the old version of this seat. Ramirez went up against Rep. Rubén Hinojosa in 2012 and took fifth place with just 5% in what was a pretty low-profile primary.

Ramirez ran again when Hinojosa retired four years later, and he originally tried to be listed on the ballot as “Ruben Ramirez Hinojosa” to include his mother’s maiden name. The candidate, who was identified as “Ruben Ramon Ramirez” in 2012, said he wasn’t trying to confuse voters into thinking he was the incumbent and argued he’d long used “Hinojosa” and “Ramirez” interchangeably. However, he ended up getting listed as “Ruben Ramirez” after party officials threatened legal action, and he ultimately earned 6% of the vote. The 15th is open again because the eventual winner of that contest, Vicente Gonzalez, is now running for the revamped 34th District.