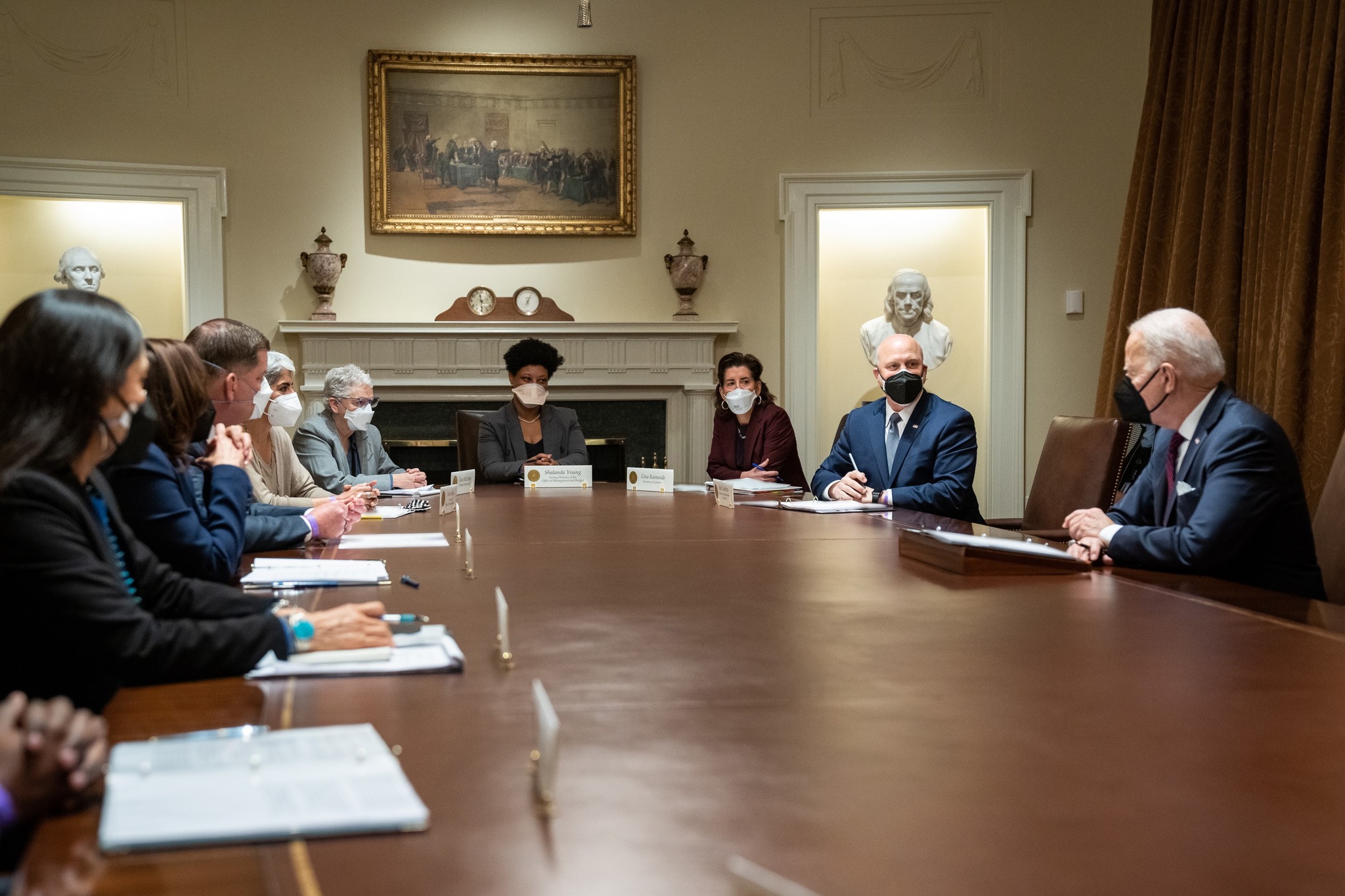 “The most punishing sanctions that U.S. officials have threatened to impose on Russia could cause severe inflation, a stock market crash and other forms of financial panic that would inflict pain on its people — from billionaires to government officials to middle-class families,” the New York Times reports.

“U.S. officials vow to unleash searing economic measures if Russia invades Ukraine, including sanctions on its largest banks and financial institutions, in ways that would inevitably affect daily life in Russia.”

“Russia’s military buildup near Ukraine has expanded to include supplies of blood along with other medical materials that would allow it to treat casualties, in yet another key indicator of Moscow’s military readiness,” Reuters reports.

“Ukrainian officials sharply criticized the Biden administration Friday for its ominous warnings of an imminent Russian attack, saying they had needlessly spread alarm, even as a new Pentagon assessment said Russia was now positioned to go beyond a limited incursion and invade all of Ukraine,” the New York Times reports.

“The diverging viewpoints brought into the open the stark disagreement between Ukraine and its key partner over how to assess the threat posed by Russia, which has massed about 130,000 troops on Ukraine’s border in what American officials are calling a grave threat to global peace and stability.”

“On the other side of this border in northern Ukraine, not visible through the thick pine and birch forests that crowd the E-95 highway but noticeable to passing truckers, a force is gathering in Belarus more potent than anything seen in the country since the fall of the Soviet Union, officials and military analysts say,” the New York Times reports.

“Russia has deployed tanks and artillery, fighter jets and helicopters, advanced rocket systems and troops by the thousands all across Belarus, augmenting a fighting force that already envelopes Ukraine like a horseshoe on three sides. Russia says the troops have deployed for military exercises scheduled to commence next month, but the buildup in Belarus could presage an attack from a new vector, one in proximity to Ukraine’s capital, Kyiv.”

“With much of Ukraine’s military might concentrated in the country’s east — where a war with Russian-backed separatists has raged for eight years — military analysts and Ukraine’s own generals say it will be difficult for the country to muster the forces necessary to defend its northern border.”

“Germany is expected to bar Estonia from sending heavy artillery to shore up Ukraine’s defences against the threat of Russian invasion,” the Times of London reports. “Nine 122mm howitzers have been earmarked for the Ukrainian military but Berlin has a veto because they originally belonged to the army of communist East Germany.”

“President Joe Biden is considering a federal judge in South Carolina as one of several candidates to replace retiring Supreme Court Justice Stephen Breyer, the White House confirmed, and may be casting a wider net than the three or four potential nominees whose names have widely circulated,” USA Today reports.

Former Obama advisor Stephanie Cutter in the New York Times: “In 2009, when President Barack Obama nominated Judge Sonia Sotomayor to the court, our team shepherded the nominee through the halls of the Senate for courtesy calls with 89 senators, most of whom waited to announce their intended vote until the Judiciary Committee did its work in vetting and questioning her. Not until that process was complete could they take the measure of her fitness to serve on the court.

“Those days are gone. Mr. Biden shouldn’t look to the process we followed in the Sotomayor nomination. Instead, he should look to the nomination and confirmation of Justice Amy Coney Barrett.

“Over Mr. Trump’s term, Republicans distilled the Supreme Court nomination process to pure politics. Instead of spending weeks scrutinizing a nominee’s rulings and parsing legal intricacies for potential hearing questions, they simply rubber-stamped Mr. Trump’s picks. Even before Mr. Trump announced his nominee to succeed Justice Ruth Bader Ginsberg, the chairman of the Senate Judiciary Committee, Lindsey Graham, declared that he had enough votes to confirm any nominee in both the Judiciary Committee and on the Senate floor.”

New York Times: “With their bare-minimum 50-seat majority, Democrats will not have that luxury after Mr. Biden nominates the first Black woman for the court sometime in the next few weeks. Considering the toxic partisan atmosphere surrounding contemporary Supreme Court fights, it is conceivable she could make history not only because of her gender and race, but also as the first person elevated to the court by a tiebreaking vote of the vice president.”

“It would be a far cry from the simple voice-vote approval of many of her predecessors as recently as the 1960s. Or the 98-to-0 confirmation of Justice Antonin Scalia, a leading judicial conservative, in 1986. Or even the 87-to-9 vote in 1994 for Justice Stephen G. Breyer, a member of the court’s liberal wing, who announced on Thursday that he would step down after nearly three decades.”

“The decline in consensus Supreme Court confirmations has been precipitous, and the escalation of partisan warfare has been sharp.”

Washington Post: “With the U.S. Supreme Court expected to decide in the coming months whether to upend its nearly 50-year precedent that established a constitutional right to abortion nationwide, lawmakers in Republican-led states across the country have moved aggressively in recent weeks to lay the groundwork for a new era of abortion restrictions.”

“While it’s possible that the high court either will overturn Roe or leave the precedent fully intact, many legal scholars and advocates on both sides anticipate the justices will land somewhere in the middle, instantly changing the standard for abortion legislation.”

Former President Donald Trump said during a rally in Texas that he would consider pardoning those charged in connection with the Jan. 6 attack on the Capitol, The Hill reports.

Said Trump: “If I run, and if I win, we will treat those people from Jan. 6 fairly. And if it requires pardons, we will give them pardons. Because they are being treated so unfairly.”

Washington State Trooper Robert LaMay, who went viral when he blew up at Gov. Jay Inslee (D) over vaccine mandates in a video last year, has died of Covid-19 at age 50, KIRO reports. Funny how this always happens. It is almost like being unvaccinated kills you. Indeed. The number of Trumpers dying is starting to be statistically determinative in the 2024 election.

“Individuals who have been fully vaccinated against COVID-19 and have received a booster dose will soon be exempt from the city-wide mask mandate in San Francisco in certain group settings,” Insider reports.

“North Korea on Sunday fired what appeared to be the most powerful missile it has tested since President Joe Biden took office, as it revives its old playbook in brinkmanship to wrest concessions from Washington and neighbors amid a prolonged stalemate in diplomacy,” the AP reports.

“The Japanese and South Korean militaries said the missile was launched on a lofted trajectory, apparently to avoid the territorial spaces of neighbors, and reached a maximum altitude of 2,000 kilometers (1,242 miles) and traveled 800 kilometers (497 miles) before landing in the sea.”

“Pope Francis denounced the ‘distortion of reality based on fear’ that has ripped across the world during the coronavirus pandemic,” the Washington Post reports.

Said Francis: “We can hardly fail to see that these days, in addition to the pandemic, an ‘infodemic’ is spreading: A distortion of reality based on fear, which in our global society leads to an explosion of commentary on falsified if not invented news.”

“A convoy of thousands of truckers and other protesters have converged on Parliament Hill to call for an end to COVID-19 vaccine mandates and other public health restrictions — a raucous demonstration that has police on high alert for possible violence even as organizers urge the crowd to be peaceful,” CBC reports.

“Amid security concerns, Prime Minister Justin Trudeau and his family have been moved from their home to an undisclosed location in the nation’s capital.”

New York Times: “Republicans on Capitol Hill are using President Biden’s failures to fuel their bid to retake control of Congress, focusing on his collapsing legislative agenda, his unfulfilled promise to “shut down” the coronavirus pandemic and rising voter anxieties over school closures and inflation as they seek a winning message for this year’s elections.”

“Mr. Biden’s troubles have frustrated Democrats, prompting calls for a major course correction. At the same time, they have delighted Republicans, who have been intent on rehabilitating themselves in the eyes of voters after the Jan. 6 attack on the Capitol last year, which highlighted the party’s lurch toward extremism and its continuing rifts under the influence of former President Donald J. Trump.”

“Now, after months of grappling with their party’s role in stoking the riot, the ongoing influence of Mr. Trump’s election lies and the rise of right-wing activists who risk alienating more mainstream conservative voters, Republicans believe they are finally in a position to capitalize on what they view as a historically advantageous environment.”

“Texas Gov. Greg Abbott (R) is being blamed by GOP opponents and Democrats for bungling the deployment of thousands of National Guard troops to the border under his signature program Operation Lone Star after a recent spate of suicides among the troops,” the Wall Street Journal reports.

“The deployment was hasty, Guardsmen say. Some stationed on the border say they have little to do, which is leading to low morale. As well, the state has been slow to pay them, Guardsmen say.”

“The course of the pandemic has repeatedly forced the administration to deviate from that initial script. At times, administration officials have been able to adapt quickly to changing circumstances. But in other cases, by their own admission, they failed to anticipate how the virus would evolve and how Americans would respond.”

“Democrats in Congress have fractured repeatedly over President Joe Biden’s agenda, stalling legislation and creating an atmosphere of mistrust that has made it increasingly difficult for progressives and centrists to work together,” the AP reports.

“But one area where the party has not cracked, not even an inch, is on Biden’s nominations to the courts.”

“That ironclad unity has helped Biden appoint the most judges during the first year of a presidency since John F. Kennedy. The achievement is giving Democrats hope that the coming fight over the Supreme Court seat will allow them to go on the political offensive and move past an ugly stretch of legislating that depressed their base.”

“Sometimes a president’s agenda crashes and burns in dramatic fashion, flaming out for all the political world to see, forcing a course correction by the Oval Office occupant and his allies in the Capitol,” the Washington Post reports.

“Think John McCain flashing a thumbs down on the Senate floor during the summer of 2017, providing the 51st vote to kill President Donald Trump’s bid to repeal the Affordable Care Act.”

“But far more often a presidential agenda just fades into the backdrop of political noise as a midterm election approaches, dying for all intents and purposes many months before Senate leaders are forced to pronounce that the issue won’t get a vote even if they promise to keep fighting.”