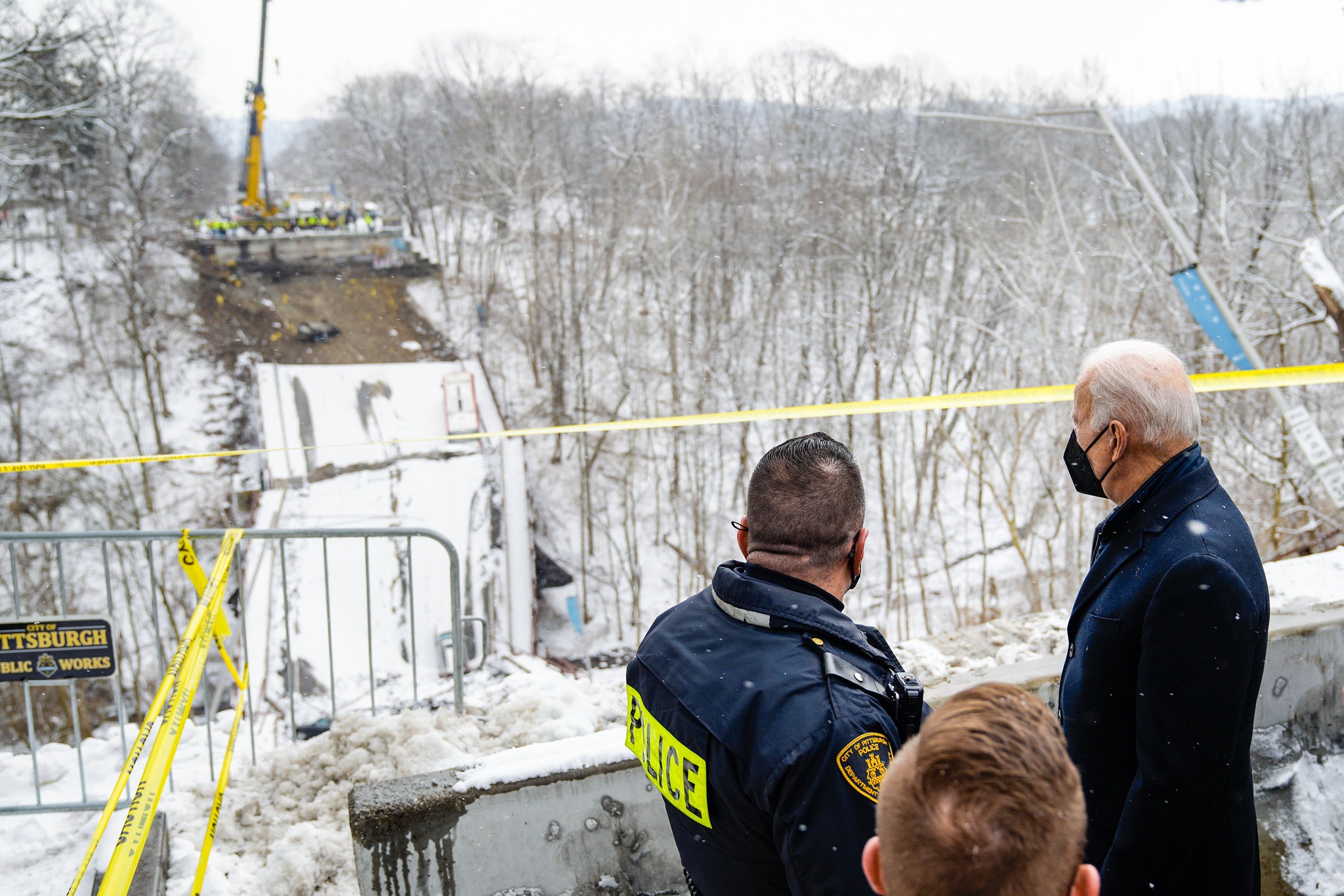 “A Pittsburgh bridge collapsed early Friday, just hours before President Biden was scheduled to visit the city to talk about infrastructure,” the Washington Post reports.

Insider: “The Biden administration said this month that Pennsylvania had more than 3,300 bridges that were in poor condition, and that the state would get $1.6 billion for repairs as part of his $1 trillion infrastructure bill.”

“As if scripted by TV writers, a bridge in Pittsburgh collapsed mere hours before President Joe Biden was set to visit the area to tout his bipartisan infrastructure law,” Politico reports.

“His fellow Democrats immediately seized on the situation as proof of the importance of that law.”

“Russian President Vladimir Putin reiterated his call for ‘lasting, legally binding security guarantees’ from the United States and NATO in a phone call Friday with his French counterpart, Emmanuel Macron, the Kremlin said, after a top Russian official threatened that Russia would ‘retaliate’ if its demands were not met,” the Washington Post reports.

“The Russian leader showed no sign of blinking in the face of transatlantic unity over NATO’s open-door policy and the rights of Ukraine and other nations to choose their own alliances. He complained that Western leaders were ignoring Russia’s concerns.”

“In a break from the past, the U.S. and its allies are increasingly revealing their intelligence findings as they confront Russian preparations for a possible invasion of Ukraine, looking to undercut Russian President Vladimir Putin’s plans by exposing them and deflecting his efforts to shape world opinion,” the AP reports.

“The Biden administration is narrowing its targets for a barrage of economic sanctions against Russia if it attacks Ukraine—hitting major Russian banks, state companies and needed imports, though the strategy faces obstacles that have hindered previous pressure campaigns,” the Wall Street Journal reports.

“Administration officials said the planned actions are being finalized and are unparalleled in recent decades against Russia, putting teeth into President Biden’s threat to apply punishing financial and other sanctions in the event of a Russian assault.”

Politico: “Ukraine was beset by attacks earlier this month when hackers defaced and disabled more than 70 government websites, and Microsoft discovered malware planted in Ukrainian government systems that could be triggered at any moment.”

“While these instances raised concerns, they were only a hint of Russian cyber capabilities. In a full-scale cyber assault, Russia could take down the power grid, turn the heat off in the middle of winter and shut down Ukraine’s military command centers and cellular communications systems. A communications blackout could also provide opportunities for a massive disinformation campaign to undermine the Ukrainian government.”

“Such a nightmare for Ukraine could not only give Russian President Vladimir Putin an avenue to victory, but also provide a sneak peek into the future of warfare.”

Belarus President Alexander Lukashenko said Friday there will only be war if “aggression is committed against Belarus” or “our ally Russia,” Politico reports.

“Moscow has put what appear to be final preparations for an invasion of Ukraine by sending medical units to the front, moving to a level of readiness that it hadn’t reached in past buildups,” the Wall Street Journal reports.

“While the moves don’t mean an attack is certain, they are prerequisites for battle and have intensified debates among Western allies over Russian President Vladimir Putin’s intentions. The U.S. and European allies, particularly Germany and France, appear to be drawing different conclusions from identical intelligence.”

“The House select committee investigating the Jan. 6, 2021, assault on the U.S. Capitol issued subpoenas Friday to more than a dozen people in seven states who tried to submit unofficial slates of electors as part of an effort to overturn the 2020 election in favor of former President Donald Trump,” the Wall Street Journal reports.

Senate Republican Leader Mitch McConnell (R-KY)), who famously refused to give the last Democratic Supreme Court nominee a Senate hearing or vote, said he’s ready to give President Biden’s pick to the high court “a fair look,” The Hill reports.

Said McConnell: “I’m going to give the president’s nominee, whoever that may be, a fair look and to not predict. We don’t even know who the nominee is.”

Said Collins: “I felt that the timetable for the last nominee was too compressed. This time, there is no need for any rush. We can take our time, have hearings, go through the process—which is a very important one. It is a lifetime appointment, after all.”

“A gauge the Federal Reserve prefers to measure inflation rose 4.9% from a year ago, the biggest gain going back to September 1983,” CNBC reports.

“A separate Labor Department data point that Fed officials also watch closely showed that total compensation costs for civilian workers increased 4% over the past 12 months. That is the fastest pace in history for the employment cost index, a data set that goes back to the beginning of 2002.”

“A federal court has rejected a plan to lease millions of acres in the Gulf of Mexico for offshore oil drilling, saying the Biden administration failed to conduct a proper environmental review,” the AP reports.

“The Biden administration on Tuesday approved a massive $2.5 billion arms sale to Egypt despite ongoing concerns over human rights,” the AP reports.  “The sales were announced just hours after congressional Democrats urged the administration not to release a much smaller package of military assistance that had been put on hold last year pending the Egyptian government meeting certain rights-related conditions.”

“Governors across the country are sitting on mounds of cash just when they need it most: election season,” Politico reports.   “After suffering through the bleakest of deficits during the early days of the pandemic, many governors now get to spend record sums, thanks to massive aid packages from Washington and booming tax revenues. More than two dozen governors are up for reelection this fall, and they couldn’t ask for a better cash situation at their disposal.”

South Dakota Gov. Kristi Noem (R) is currently on her fifth chief of staff since she took office in 2019,” the Sioux Falls Argus Leader reports.   “Her office previously described each of the departures from the office as amicable.”

Perhaps this is why: she hires crazies like herself.  Noem’s (R) interim chief of staff likened banning transgender girls from participating in girls’ sports to thwarting terrorism, the Grand Forks Herald reports.

A new profile of Dr. Anthony Fauci shows how he’s much more than a public health official who has helped save millions of lives. He’s also a pretty adept politician.

A new survey shows that any debate over the future of remote working is over: 58% of “knowledge workers” are working in hybrid work arrangements, and two-thirds cite it as their preferred work option.

This is not a joke: North Korea was named chair of the UN disarmament conference.

“We encourage any New Yorker who came into contact with Sarah Palin to get tested.”  — Jonah Allon, spokesman for New York City Mayor Eric Adams, quoted by the New York Daily News.

“As I get older, I get more Libertarian. I don’t like banning books. This could be a slippery slope that goes to really bad places.”  — Jeb Bush, quoted by the Dallas Morning News.

Washington Post: “The lines between political and for-profit efforts by the former president and his family have blurred for months as they have moved to reestablish and expand the branding empire they enjoyed before he entered the White House. Major Republican committees are promoting Trump’s private business interests, and Trump has repeatedly used his political action committee to promote his private products, in addition to building a political war chest of more than $110 million.”

“Years after shuttering businesses selling Trump steaks, Trump vodka and Trump mattresses, the Trumps have returned to unconventional direct-to-consumer appeals that trade on his continued popularity among a devoted base to the tune of millions of dollars in receipts. Even as some of his traditional businesses have struggled after a polarizing presidency, Trump and his family have been launching a whole set designed to target his die-hard followers.”

“Former Vice President Mike Pence said he had not spoken to former President Donald Trump since last summer, revealing the extent of the rift between the pair since the Capitol riot,” Insider reports.

“The Chinese ambassador to Washington has warned that the US and China could end up at war over Taiwan, in stark comments illustrating the rising tensions between the powers over the fate of the island,” the Financial Times reports.

James Carville told Vox that Democrats need to be smarter about how they prioritize their resources.

Said Carville: “Just look at how Democrats organize and spend money. For Christ’s sake, Jaime Harrison raised over $100 million only to lose his Senate race to Lindsey Graham by 10 points. Amy McGrath runs for Senate in Kentucky and raises over $90 million only to get crushed by Mitch McConnell.”

He added: “They were always going to lose those races, but Democrats keep doing this stupid shit. They’re too damn emotional. Democrats obsess over high-profile races they can’t win because that’s where all the attention is. We’re addicted to hopeless causes.”

“Look, the child tax credit is extraordinary. We’ve reduced child poverty in this country by 40 percent. It’s unbelievable. And I just keep trying and trying to win elections because this thing is enormously successful. But I’ll just keep saying it: If we don’t have Sen. Manchin, we’re going to have somebody really, really, really extreme in his seat.”  — James Carville, in an interview with Vox.