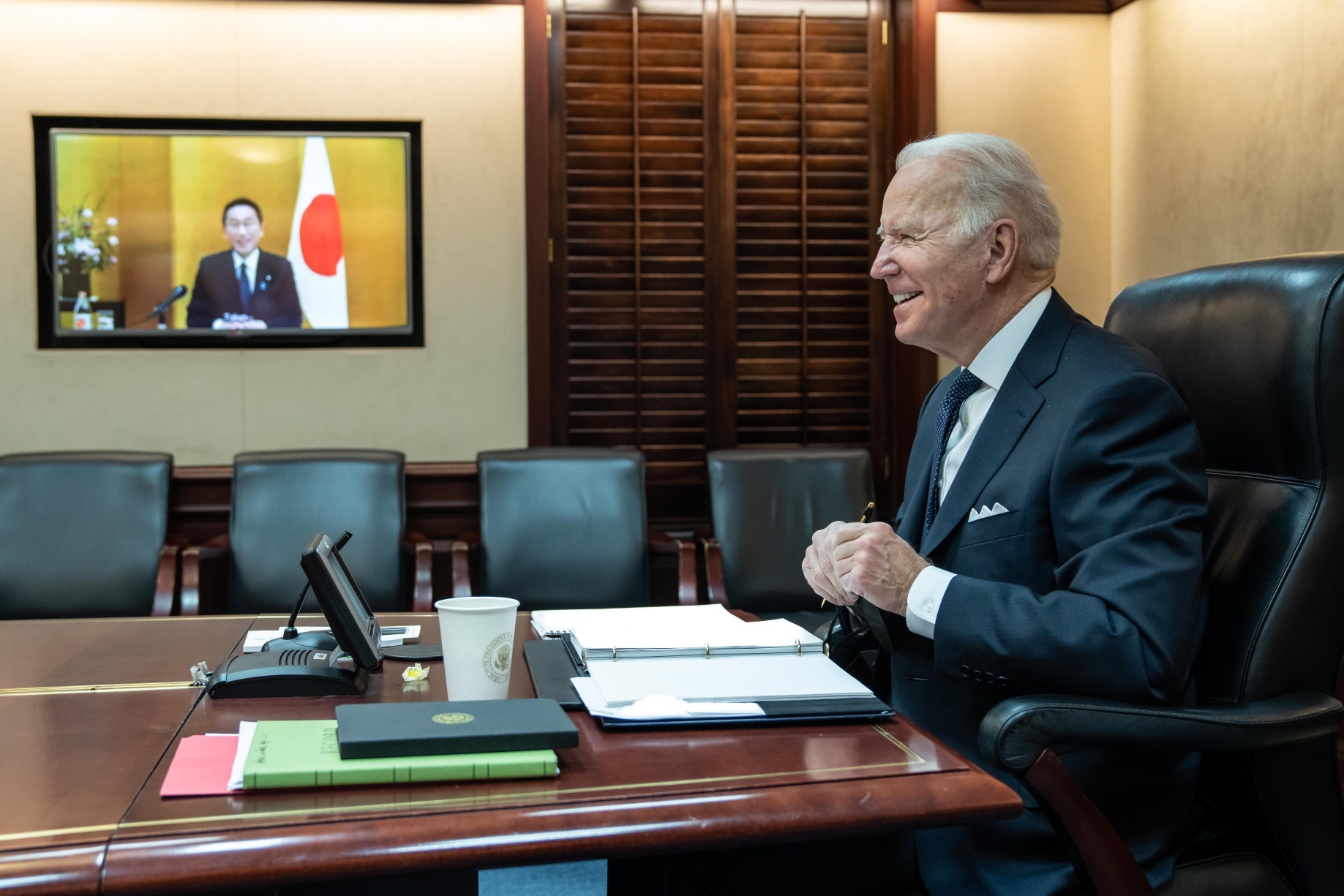 “The U.S. is prepared to impose sanctions and export controls on critical sectors of the Russian economy if Russian President Vladimir Putin invades Ukraine,” the Wall Street Journal reports.

“Russian troops are encircling Ukraine from three sides. In Washington and Brussels, there are warnings of crushing sanctions if Vladimir Putin orders an invasion. Embassy families — both American and Russian — are being evacuated from Kyiv,” the New York Times reports.

“Yet there are still diplomatic options — ‘offramps’ in the lingo of the negotiators — and in the next several days the Biden administration and NATO are expected to respond, in writing, to Mr. Putin’s far-reaching demands.”

“The question is whether there is real potential for compromise in three distinct areas: Russia’s demand for ironclad assurances that Ukraine won’t enter NATO; that NATO won’t further expand; and that Russia can somehow restore some approximation of its sphere of influence in the region to before the strategic map of Europe was redrawn in the mid-1990s.”

Punchbowl News: “The Biden administration will hold two classified briefings today for congressional leadership aides and committee staff on the deteriorating situation in Ukraine, with the Russian military buildup continuing on that embattled nation’s eastern border.“

“Administration officials are working on briefings for all members of the House and Senate, but that will have to wait until Congress returns next week.”

“The Biden Administration announced on Tuesday that it was working with gas and crude oil suppliers from the Middle East, North Africa and Asia to bolster supplies to Europe in coming weeks, in an effort to blunt the threat that Russia could cut off fuel shipments in the escalating conflict over Ukraine,” the New York Times reports.

“European allies have been cautious in public about how far they would go in placing severe sanctions on Moscow if it invades Ukraine. Germany has been especially wary; it has shuttered many of its nuclear plants, increasing its dependence on natural gas imports to generate electricity.”

“German Chancellor Olaf Scholz held firm on a refusal to supply weapons to Ukraine, brushing off criticism that the stance undermines efforts to deter Russia from an incursion,” Bloomberg reports.

“Europe’s largest economy has a long-standing policy against exporting weapons to conflict zones and will stick to it.”

At the end of a photo op, Peter Doocy of Fox News shouted a question to President Biden:

DOOCY: Do you think inflation is a political liability in the midterms?

BIDEN: It’s a great asset—more inflation. What a stupid son of a bitch.

President Biden phoned Peter Doocy of Fox News after being caught on a hot mic calling him “a stupid son of a bitch” and said, “It’s nothing personal, pal,” the Daily Beast reports. When asked by Sean Hannity if Biden apologized, Doocy remained diplomatic and said the president “cleared the air.”

He added: “And I appreciate it. We had a nice call.”

“Have we ever seen a President attack and malign the free press like Joe Biden has?”  — Rep. Jim Banks (R-IN), on Twitter, referring to President Biden calling Fox News’ Peter Doocy “a stupid son of a bitch.” LOL. First, yes. Trump wants to jail and physically harm journalists. Second, the more the GOP complains about this, the more people will hear the charge that Peter Doocey is a stupid son of bitch repeated. Keep going outrage lovers.

A Florida history professor was slated to give a presentation on the civil rights movement in front of the state’s Osceola County School District teachers on Saturday — then the school district canceled the event due to Florida Republicans’ hysteria over “critical race theory.”

The school district superintendent told the teachers in an email that the professor’s lecture needed to be reviewed by the district “in light of the current conversations across our state and in our community about critical race theory.”

“Omicron infections are trending down nationally, but the number of deaths is as high now as it was during the summer’s Delta wave,” Axios reports.

“The Biden administration is officially withdrawing its requirement that most workers be vaccinated or regularly tested for Covid-19 – the controversial rule the Supreme Court blocked from enforcement earlier this month,” USA Today reports.

Grid: “The evidence overwhelmingly suggests that fake CDC vaccination cards are widespread in the United States. An Economist/YouGov poll reported 12 percent of American adults under 30 knew someone with a fake vaccine card. TMZ covered fake cards. A fake vaccine card was a punchline for a Saturday Night Live sketch.”

“Each false credential weakens the credibility of every real card, experts and officials say, diminishing the overall reliability of the cards as proof of vaccination. Proof of vaccination is key to the reopening process for workplaces and public venues, but Democratic and Republican politicians have shied away from implementing a national government database to track vaccinations.”

“The bipartisan group focused on updating the Electoral Count Act of 1887 is seizing on this recess period to court senators more freely,” Axios reports.

“The group is led by Sen. Susan Collins (R-ME) and includes many members who helped reach the bipartisan infrastructure deal. They see themselves as the only hope of creating an election reform package able to muster 60 votes in the Senate.”

“A panel of Fulton County judges on Monday cleared the way for a special grand jury to be used as part of District Attorney Fani Willis’ investigation of former President Donald Trump and his efforts to overturn Georgia’s 2020 election results,” the Atlanta Journal Constitution reports.

“Special grand juries, which include 16 to 23 people, are rare in Georgia. They can’t issue indictments but can subpoena witnesses and compel the production of documents and information. Unlike regular grand juries, they can be seated for longer than two months and are focused on a singular case.”

David French: “When you walk through the evidence of Trump’s brazen effort to bully, threaten, and command subordinates and state officials to steal an election, his actions quite obviously demand a close criminal inquiry.”

“For a sitting American president to seek to engineer a coup is unprecedented, but our law contains ample precedents that punish other citizens for similar misconduct. The law is not just for the little people. Trump is not a king. He does not enjoy sovereign immunity. He is presently nothing more than a private citizen, and if President Trump broke the law, then Citizen Trump should face the consequences.”

New York Times: “Around the country, Democratic elected officials who in the pandemic’s early phase shut down cities and states more aggressively than most Republicans did — and saw their popularity soar — are using a different playbook today. Despite the deadly wave fueled by the Omicron variant, Democratic officials are largely skipping mask mandates and are fighting to keep schools open, sometimes in opposition to health care workers and their traditional allies in teachers’ unions.”

“The shift reflects a potential change in the nature of the threat now that millions of Americans are vaccinated and Omicron appears to be causing less serious disease. But it is also a political pivot. Democrats are keenly aware that Americans — including even some of the party’s loyal liberal voters — have changed their attitudes about the virus and that it could be perilous to let Republicans brand the Democrats the party of lockdowns and mandates.”

New York Times: “No single public health expert has the role of guiding the response, running interference between various players or standing up to the White House when necessary.”  Said one senior federal official: “There is no formal decision-making process. Who is in charge of all this?”

Conspiracy theorist and radio host Alex Jones said that he was deposed by the House committee investigating Jan. 6 and that he exercised his Fifth Amendment right against self-incrimination “almost 100 times,” NBC News reports.

“Newt Gingrich’s controversial weekend comment that the House January 6 Committee investigators could face jail time themselves if Republicans take over Congress came about two weeks after the panel subpoenaed his longtime former aide who also co-authored a book with him,” Insider reports.

A federal judge is forcing conservative lawyer John Eastman, who worked for Donald Trump before the January 6 insurrection, to respond to a House select committee subpoena for his emails — “setting congressional investigators up to receive access to information they’ve wanted for months but had not been able to get,” CNN reports.

“Eastman previously refused to provide information to the House when it subpoenaed him directly for testimony and documents. He had claimed his Fifth Amendment protection against self-incrimination as a response to nearly 150 questions and to his document subpoena.”

The United States is facing a major shortage of semiconductors with the situation threatening American factory production and helping to fuel inflation, the New York Times reports.

Said Commerce Secretary Gina Raimondo: “It’s alarming, really, the situation we’re in as a country, and how urgently we need to move to increase our domestic capacity.”

“Florida Gov. Ron DeSantis (R) is calling on regulators to allow use of two monoclonal antibody therapies for Covid-19 after the FDA halted their use in a ruling neither manufacturer disputes,” Bloomberg reports.

“The FDA said Monday that it was rescinding authorization for the use of Eli Lilly & Co. and Regeneron Pharmaceuticals Inc. monoclonal antibody treatments in the U.S. because they aren’t effective against omicron, which has become overwhelmingly dominant in all regions of the country, including Florida.”

New York City Mayor Eric Adams (D) told CNN his city is “dealing with a sea of violence” after a police officer was fatally shot and two people were pushed on the subway tracks.  Said Adams: “There are many rivers that are feeding that sea, and one of them is using the proper police tactics to continue to build a dam on that part of this aspect of it.”

California state Sen. Richard Pan (D) “is proposing to require that all school children receive a Covid-19 vaccine starting in 2023, a law that would be the nation’s strictest student mandate if approved,” Politico reports.

British prime minister Boris Johnson will cooperate with a police investigation into alleged lockdown breaches in Downing Street but does not believe he broke the law, The Guardian reports.

A Turkish journalist has been sent to prison for “insulting” the nation’s President Recep Tayyip Erdogan, CNN reports.

Republicans in the Florida legislature have introduced a bill “that would allow some political groups to shield sources of funding from local and state government scrutiny,” the Miami Herald reports.

“It’s kind of mind-blowing to consider that 5 percent of the current Senate has been censured by the same state organizations that helped elect them in the first place.”

Reps. Doug Lamborn (R-CO) and Marie Newman (D-IL) are being investigated by the House Committee on Ethics for potential misuse of official resources and potentially bribing a primary rival with a job, respectively. Both lawmakers deny the allegations.

The Office of Congressional Ethics said that it had found reason to believe that Rep. Marie Newman (D-IL) offered a job to a potential primary opponent in exchange for the rival to drop out of the race, Insider reports. The case now goes to the House Ethics Committee, where it will be reviewed by her peers.

“A newly released report by the Office of Congressional Ethics alleges that Rep. Doug Lamborn’s (R-CO) wife has been improperly involved in the running of his congressional office, including routinely asking staffers to perform personal errands on official time, such as moving furniture or setting up Zoom meetings,” Punchbowl News reports.

“Jeanie Lamborn ‘often sleeps’ in the office with the congressman, and she reportedly had an official House email address.”