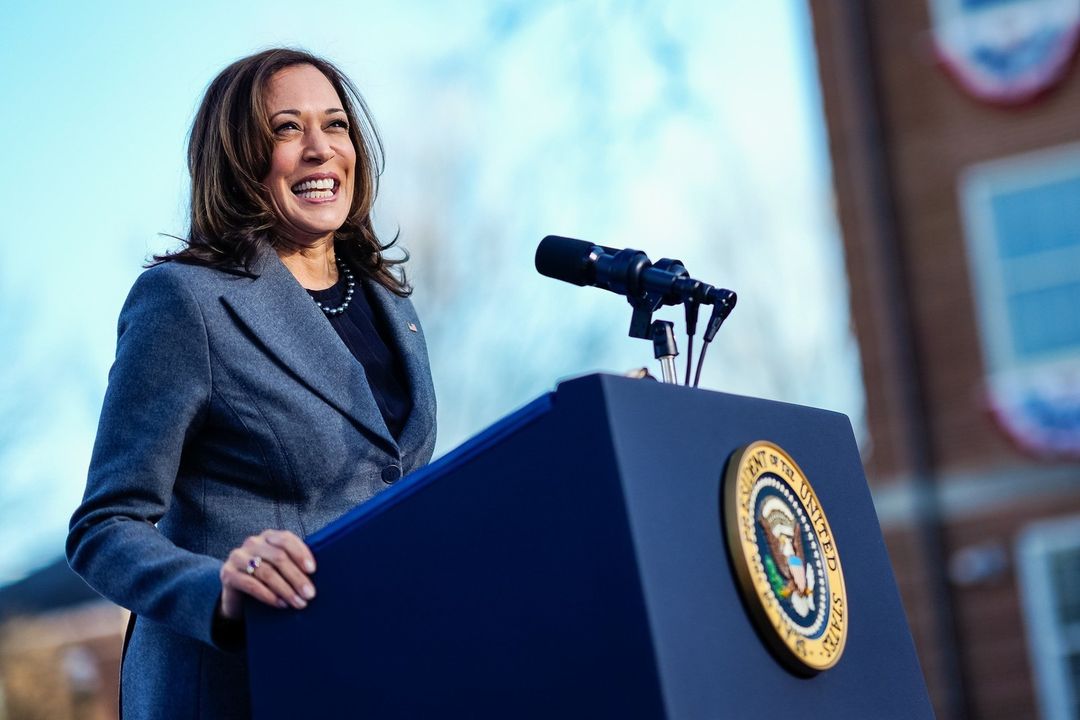 A new AP-NORC poll finds just 6 in 10 Black Americans said they approved of President Biden, down from about 9 in 10 who approved in polls conducted through the first six months of Biden’s presidency.

First Read: “While Democrats hold a narrow 1-point lead in congressional preference, Republicans enjoy a double-digit enthusiasm advantage, with 61 percent of Republicans saying they are very interested in the upcoming midterms — registering their interest either as a 9 or 10 on a 10-point scale.”

“That’s compared with 47 percent of Democrats who have the same high level of interest.”

Harry Enten: “Ultimately, the one thing that can probably save the Democrats in November is if Biden’s approval rating improves. That’s certainly possible. However, it is unlikely. No president has seen a double-digit improvement in his net approval rating from now until his first midterm like Biden would need to have a positive net approval rating.”

“That said, no president in the polling era has had to deal with a global health crisis like the coronavirus this early in his first term, either. It’s plausible that the old historical rules won’t apply.”

Jonathan Bernstein: “Generally, the best explanation is the simplest one: People are in a pretty grumpy mood as the second year of the pandemic ends with record-high case counts and various other negative effects — including inflation — and they’re taking it out on the president. We may get a reasonable test of this explanation in the spring. If the omicron wave ebbs and we get a few months similar to March through June last year; if inflation turns out to have peaked at the end of 2021; and if no new major negative news story emerges, then we’ll see whether Biden’s popularity rebounds a fair amount by, say, June. That said, I wouldn’t expect a full recovery for a while even if conditions do get better, if only because the virus has dashed people’s hopes so many times.”

“What all this suggests is that there’s only a very loose connection between the president’s actions and public opinion. Biden benefited last spring and summer from a seeming return to normal that at best he was only partly responsible for; he slumped in the fall despite continuing the same policies; and he may recover without fundamentally changing course at all.”

“Democrats braced for disaster when state legislatures began redrawing congressional maps, fearing that Republican dominance of statehouses would tilt power away from them for the next decade,” the AP reports.

“But as the redistricting process reaches its final stages, that anxiety is beginning to ease.”

“For Democrats, the worst case scenario of losing well over a dozen seats in the U.S. House appears unlikely to happen. After some aggressive map drawing of their own in states with Democratic legislatures, some Democrats predict the typical congressional district will shift from leaning to the right of the national vote to matching it, ending a distortion that gave the GOP a built-in advantage over the past five House elections.”

“Arizona Republicans have put forth two dozen bills this month that would significantly change the state’s electoral processes after the GOP’s unorthodox review of millions of ballots affirmed President Joe Biden’s victory and turned up no proof of fraud,” NBC News reports.

“Proposals introduced in the state House or the Senate would add an additional layer to the state’s voter ID requirement, such as fingerprints, and stipulate the hand counting of all ballots by default. Other legislation would require that paper ballots be printed with holograms and watermarks.”

Related from HuffPost: “Arizona’s Republican State Senate, which hired the discredited Cyber Ninjas company to carry out a vote audit of Maricopa County, is now desperately seeking the company’s hidden public records to comply with a court order.”

Roger Stone lashed out against former Trump spokesman Jason Miller calling him a liar and a “despicable piece of shit,” Insider reports.  Stone also accused Miller of perjuring himself during the 2016 Mueller Investigation.

Ohio U.S. Senate candidate J.D. Vance (R) gave a surprising answer to a local Ohio reporter last week when asked how he justifies some of his more bombastic rhetoric, saying that “our country is kind of a joke,” Mediaite reports.

Arizona Gov. Doug Ducey (R) rebuffed rumors that he was plotting a run for Senate after previously saying that he wasn’t going to run, the Arizona Mirror reports.  Said Ducey: “My answer hasn’t changed.”

“With less than a month left to vote by mail in the March primary election, hundreds of applications for mail-in ballots are being rejected as both Texas voters and local election officials decipher new ID requirements enacted by Republican lawmakers,” the Texas Tribune reports.

“Texas voters and local election officials have found themselves enveloped in a fog of errors, delays and miscommunications as they navigate new rules for casting votes by mail.”

Wall Street Journal: “The current top tier of Democrats campaigning for U.S. Senate in Wisconsin includes a lieutenant governor, a state treasurer, a county executive and a former Goldman Sachs analyst who is a billionaire’s son. None could be described as centrists.”

“In a state decided by less than 1 percentage point in the 2020 presidential election — the third-narrowest outcome nationally — six Democrats who have raised the most money so far are all taking positions to the left of President Biden’s.”

Said O’Rourke: “I’m not interested in any national politician — anyone outside of Texas — coming into this state to help decide the outcome of this.”

Rep. Ruben Gallego (D-AZ) told CNN on Thursday that several unnamed senators have privately urged him to primary Sinema in recent days – and Sen. Bernie Sanders (I-VT), who’s already said he could support a primary challenger against her, wasn’t one of them.

It’s been far more than just senators who’ve lobbied Gallego for a primary challenge, he said. Everyone “you can imagine under the sun,” including unions and big donors, have reached out to him.

Amy Walter writes that “there’s growing evidence from both quantitative and qualitative sources,” that Donald Trump’s “path to a 2024 GOP nomination may not be as smooth as one would assume.”

“These aren’t anti-Trump types. They like Trump. They’d support a candidate for a down-ballot contest like Senate or House who had Trump’s backing. But, they are not sure they want a re-run.”

Aaron Blake: “Among the many things Donald Trump is prone to hyping and often vastly overselling, his endorsement record is near the top of the list.”

“The events of the next several months will severely test his ability to sell that record, as his 2022 endorsements are in many cases struggling to deliver an early return on his investment — and at a crucial time when it comes to Trump’s campaign to retain his hold on the GOP.”

NBC News: “So far, neither candidate has lured Trump off the sidelines after his first choice for the seat, Sean Parnell, dropped out amid scandal. Worried about backing a losing candidate, Trump is apt to withhold another endorsement until he has a clearer idea of who’s most likely to win.”

Andrew Sullivan: “Maybe a huge Republican wave this November will force Biden to recalibrate, as happened with Bill Clinton. But Biden, one is increasingly reminded, is a party man, and his party has moved so far to the left in the past five years there is no way he can pull a Sister Souljah moment without splitting the Democrats in two.”

“So he may well become a transitional figure like Jimmy Carter — a response to a criminal president, as Carter was, but too isolated, partisan and controlled by left interest groups to build a coalition for the future. Instead, a growing backlash including many Latinos, black voters, a slice of Asian-Americans, and suburban parents could create a viable and resilient multiracial coalition for the center right. We just have to pray that Trump is not the man who leads it.”

Rich Lowry: “After Trump’s presidency, the party is more populist, focused on the culture war, resistant to media narratives and skeptical of business — and it would remain so if Trump retired tomorrow and promised never to utter another word about politics.”

“Although in many ways an orthodox conservative, DeSantis covers all these bases. Importantly, he’s a lightning rod for criticism from the left — now a major plus for Republican voters — and gives as good as he gets in clashes with the media. There are few causes that light up the Republican base that he doesn’t find a way to address, whether on big tech or critical race theory, and he has emerged as the party’s exemplar on the pandemic, with his strenuous opposition to lockdowns and mandates. This gives him credibility with Trump voters and the foundation to compete with Trump, not as a critic or scold, but as someone who can do it better and, in a few instances, perhaps go further.”

“In fact, it is likely that the most successful line of attack against a potential candidate Trump will prove, one way or the other, to come from the right.”

“Republican majorities in the House and Senate overrode Gov. Andy Beshear’s (D) vetoes of bills that redraw the state’s House and U.S. Congressional District maps on a busy Thursday that also included impassioned speeches, lawsuits and a new wrinkle that rolls key election deadlines into the discussion over the new maps,” the Lexington Herald Leader reports.

Wisconsin state Rep. Elijah Behnke (R) was recorded on video saying that Republicans need to “cheat like the Democrats” to win elections and that he’d like to punch Gov. Tony Evers (D) over pandemic restrictions, the AP reports.