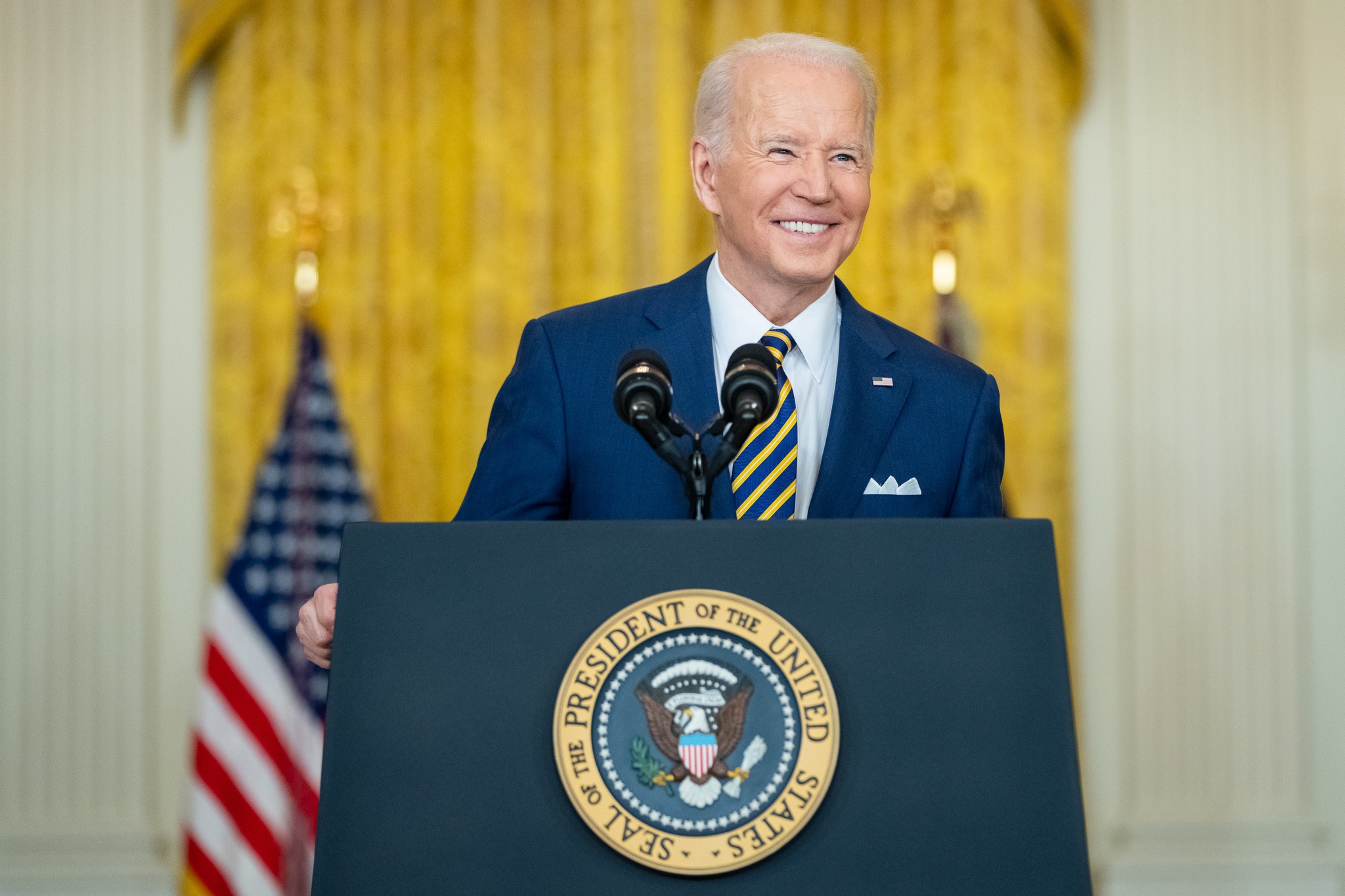 A new CNN poll finds just 30% of Americans say they’d like to see the Supreme Court completely overturn its Roe vs. Wade decision, with 69% opposed — a finding that’s largely consistent both with other recent polling and with historical trends.

NBC News Poll: “Overwhelming majorities of Americans believe the country is headed in the wrong direction, that their household income is falling behind the cost of living, that political polarization will only continue and that there’s a real threat to the nation’s democracy and majority rule.”

“What’s more, the nation’s top politicians and political parties are more unpopular than popular, and interest in the upcoming November midterms is down — not up.”

NC-Sen, NC-07: Former Rep. Mark Walker, who has to date remained in the Republican Senate primary despite weak polling as he considers dropping down to the redrawn 7th Congressional District, will talk about his 2022 plans Monday.

Hassan takes about the same percentage of the vote against each Republican, so it’s likely name recognition explains why Bolduc performs better than Morse or Smith.

MARYLAND GOVERNOR. Campaign finance reports are in covering through Jan. 12, and Maryland Matters has rounded them all up. First up are the many Democrats competing in the jam-packed June primary:

Maryland Matters’ Josh Kurtz notes that, while Baker’s haul might look low, he’s the only Democrat “participating in the state’s revamped public financing system, so there should be a payoff.” He explains that Baker, unlike his many rivals, can’t accept donations of more than $250 or take contributions from PACs or businesses. However, the public finance system, says Kurtz, “pays an 8-1 match for the first $50 raised from every Maryland donor, a 6-1 match for the second $50, and a 2-1 match on the third $50.”

On the Republican side, the best-funded contender was former state Commerce Secretary Kelly Schulz, who left the state cabinet earlier this month; Schulz raised $1.5 million and had $1.1 million on-hand. Not far behind was Robin Ficker, a perennial candidate and self-funder we hadn’t previously mentioned; Ficker took in a mere $4,000 from donors but threw in $1.1 million of his own money, which left him with $910,000 to spend. Finally, Del. Dan Cox, who is Donald Trump’s endorsed candidate, raised $350,000, took in another $43,000 through self-funding and transfers from his old campaign, and had $272,000 on-hand.

PENNSYLVANIA GOVERNOR and 17TH CD. Despite multiple media reports that former state House Speaker Mike Turzai would enter the GOP primary for governor, he announced on Wednesday that he would not in fact join the race. Another recent report indicated Turzai might run for Congress instead, but he seemed to rule that idea out as well, saying in a statement that “for now focusing on family and work is what matters most.”

Meanwhile, a well-financed PAC heavily funded by conservative billionaire Jeff Yass has announced it will support former U.S. Attorney Bill McSwain’s bid for the Republican nod in the governor’s race. Commonwealth Partners Chamber of Entrepreneurs, which advocates for charter schools, reported having $20 million in the bank as of late last year and says “all of that money is at our disposal” to help McSwain.

CALIFORNIA 40TH CD. Physician Asif Mahmood announced Thursday that he would run as a Democrat in the June top-two primary against Republican Rep. Young Kim in the new 40th District, an Eastern Orange County seat that would have backed Joe Biden by a small 50-48 margin. Kim, whose existing 39th District makes up just 20% of this redrawn constituency, already faces an intra-party challenge from Mission Viejo Councilman Greg Raths, who lost to Democratic Rep. Katie Porter 53-47 in the old 45th District in 2020.

Mahmood previously ran for state insurance commissioner in 2018, but he took a distant third in the top-two primary with 13% of the vote. He launched his new effort, however, with endorsements from several prominent state Democrats, including his old rival, Insurance Commissioner Ricardo Lara, and Southern California Reps. Tony Cárdenas and Mike Levin.

CALIFORNIA 13TH CD. A consultant for Democratic state Sen. Anna Caballero didn’t rule out the idea that Caballero could enter the top-two primary for the new (and newly open) 13th District, adding that the state senator “thinks this is [a] historic opportunity for a Latina to represent the Central Valley.” Politico notes that Caballero currently is involved in an incumbent vs. incumbent battle against fellow Democrat Melissa Hurtado brought on by redistricting.

FLORIDA 13TH CD. Attorney Kevin Hayslett has joined the GOP primary for Florida’s open 13th Congressional District and kicked off his bid with the backing of a major local politician, Pinellas County Sheriff Bob Gualtieri. In a strange twist, Hayslett represented former candidate William Braddock, who dropped out of the race last year after another Republican hopeful, 2020 nominee Anna Paulina Luna, obtained a restraining order against Braddock after he made violent threats about her.

GEORGIA 13TH CD. Former state Sen. Vincent Fort announced Thursday that he would challenge Rep. David Scott, who has long earned the ire of progressives, in the May primary for this safely blue seat in Atlanta’s southern suburbs. Scott already faces opposition from South Fulton City Councilman Mark Baker in a contest where it takes a majority to avoid a runoff.

Fort, who was elected to the legislature in 1996, stood out as one of Bernie Sanders’ most prominent Georgia supporters during the 2016 presidential primaries. Fort resigned the next year to focus on his bid for mayor of Atlanta but ultimately took a distant fifth place with 10% of the vote. He launched his new campaign by going after Scott’s conservative record, saying the seat “needs someone who believes in Democratic ideals and someone who doesn’t vote like a South Georgia Republican.”

The more recognizable name belongs to Godbee, who resigned as chief in 2012 after he was accused of having an affair with an internal affairs officer. After a brief stint as a radio host, though, he later became head of the police force for the Detroit Public Schools Community District as well as an ordained minister. Godbee launched his new campaign by alluding to his past scandal, saying, “I’m a sinner saved by God’s grace. I have no trouble articulating to the people I’m trying to support that I’ve made mistakes.”

The recently redrawn 4th, which is still situated in the northern suburbs of D.C. (and is still deep blue), is open because the man who succeeded Edwards, Rep. Anthony Brown, launched a campaign for state attorney general last year. Edwards gave up her seat to run for Senate in 2016 but was defeated in the primary 53-39 by Chris Van Hollen, then a colleague in the House. She sought to return to elective office two years later with a bid for Prince George’s County executive but again lost in the primary, this time by a wide 62-24 margin to Angela Alsobrooks.

OREGON 6TH CD. State Rep. Teresa Alonso Leon declared Thursday that she was joining the May Democratic primary for this brand-new seat in the mid-Willamette Valley. Alonso Leon would be both Oregon’s first Indigenous and Latina member of Congress; one of her intra-party rivals, state Rep. Andrea Salinas, would also be the first Latina to represent the state.

OREGON GOVERNOR. Yamhill County Commissioner Casey Kulla has dropped his bid for the Democratic nomination for governor and will instead run for the officially nonpartisan post of state labor commissioner. That position is open because the current incumbent, Democrat Val Hoyle, is running for the open 4th Congressional District.

RHODE ISLAND 2ND CD. State House Speaker Joe Shekarchi, who would arguably have been the frontrunner in the September Democratic primary, said Thursday that he would not run for this newly open seat. Two other Democratic legislators, state Sen. Sam Bell and state Rep. Carol Hagan, did express interest, though; Rhode Island Public Radio also mentions state Rep. Robert Craven as a possibility.

On the Republican side, two-time gubernatorial nominee Allan Fung has acknowledged that he’s considering entering the race to succeed retiring Democratic Rep. Jim Langevin, while former Warwick Mayor Scott Avedisian did not rule out running himself.

TEXAS 28TH CD. The FBI raided both the home and campaign headquarters of conservative Democratic Rep. Henry Cuellar on Wednesday night, though it’s not yet clear why. Agents spent hours cataloging and seizing items, including computers, with a spokesperson saying they were “conducting court-authorized law enforcement activity.” In a statement, Cuellar said he would “fully cooperate in any investigation.”

The congressman faces a rematch in the March 1 Democratic primary with immigration attorney Jessica Cisneros, whom he beat in a close 52-48 race two years ago. In response to news of the raid, a group called Better Jobs Together, which had been spending heavily to air TV ads on Cuellar’s behalf, reportedly began “cutting from its current buy.”

TEXAS 30TH CD. State Rep. Jasmine Crockett, who has the backing of retiring Rep. Eddie Bernice Johnson in this safely blue Dallas seat, has released a Lester & Associates poll of the Democratic primary giving her a 35-11 lead over perennial candidate Barbara Mallory Caraway, with party operative Jane Hope Hamilton all the way back at 3%. Candidates need to win a majority of the vote on March 1 in order to avert a May runoff.

TEXAS ATTORNEY GENERAL. The Texas Tribune has a roundup of all the fundraising for the Republican candidates for state attorney general for the second half of 2021 ahead of the March 1 primary:

Gohmert launched his campaign just before Thanksgiving by proclaiming his team had “reached our initial goal of raising $1 million” in a 10-day sprint that began on Nov. 9, but the new reports reveal he’d collected just $27,000 through Nov. 19. Gohmert eventually hit $1 million on Dec. 31―the last day of the fundraising period―when a PAC called Save Texas Now sent him $100,000 to push him over the top. The congressman defended his old claim, though, saying this week he was counting “both contributions and commitments” for the $1 million figure.