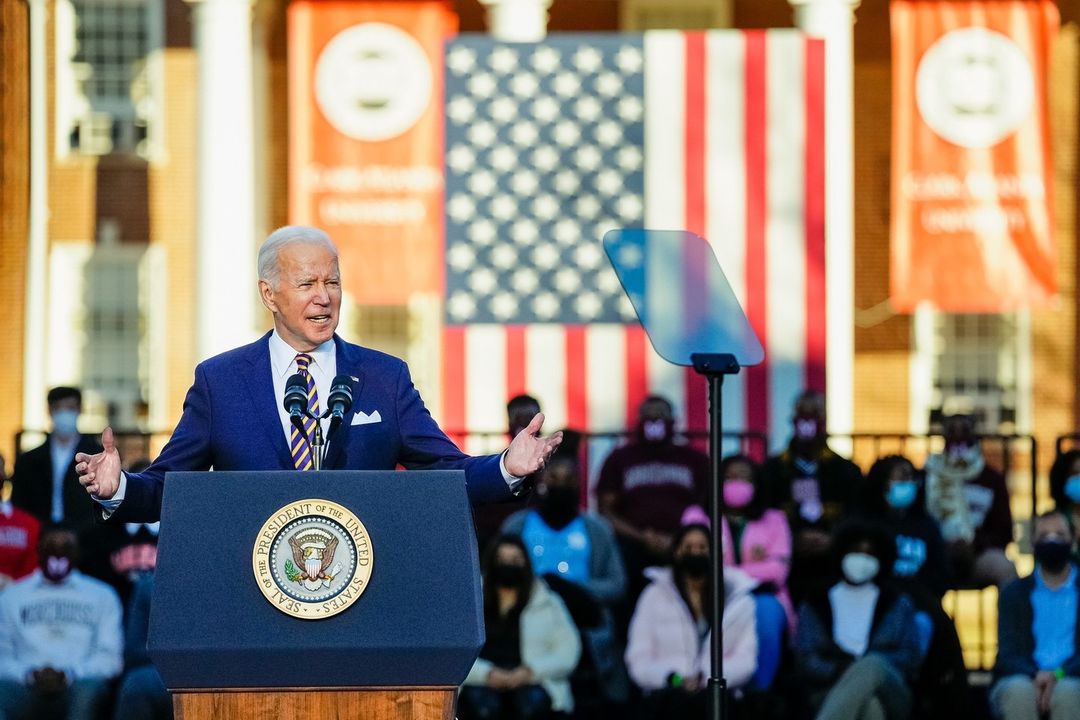 He added: “You know, when he wanted to run, he asked for my support and I supported him and he went, you know, up immediately very, very high.”

NBC News: “Both camps have denied any real friction and blamed ‘the media’ for overhyping tensions, but Trump advisers say that they see a hidden hand at play: that of Senate Minority Leader Mitch McConnell, who is in a pitched battle with the former president over the future of the Republican Party in political races all over the country.”

Nonetheless, the Daily Beast reports Trump has gossiped in recent weeks with certain confidants about DeSantis’ political vulnerabilities and “weaknesses.”

Playbook: “Donald Trump has floated the idea of doling out dual endorsements in some of the key midterm races as he becomes increasingly suspicious of his advisers who are pushing competing candidates.”

“The GOP kingmaker-in-chief has grown so distrustful of all the advice he’s getting from various aides — and so wary of being lured into picking the wrong horse — that he’s floated an idea that would essentially dilute his endorsement.”

“Another source of Trump’s endorsement apprehension: He isn’t clear about which advisers have significant personal or financial ties to the candidates they’re bending his ear about.”

QAnon followers claim Donald Trump was not at his rally in Arizona on Saturday, but that the person they saw was actually a “body doubly” or even John F. Kennedy in disguise, Newsweek reports.

Vice News: “Having spent the last two-and-a-half months holed up in Dallas awaiting the reappearance of John F. Kennedy and his son, a group of two dozen or so QAnon followers, led by an antisemitic guru called Michael Protzman, made the 1,000 mile trip to hear Trump speaking at his first major rally of 2022.”

“Ahead of the rally, Protzman, or Negative48 as he’s known to his followers, predicted the event would feature some major revelations. While most QAnon followers criticized Trump for talking about returning in 2024 rather than trying to overturn the 2020 election result, Protzman told his followers that something huge happened in the desert on Saturday night.”

Gerald Seib: “For Mr. Biden and his party, the key question is whether his rapid slide in popularity in the second half of 2021 was the temporary result of the messy process of getting things done in a closely divided Washington, or a descent to levels of popularity that will remain a drag on his party.”

“In any case, there is a long way to go before the election, and ample time in today’s sped-up political environment for the landscape to change. In the end, Democrats will want the election to be about the things they have done to help the country get through the pandemic, and to help working Americans pull ahead on daily challenges. Republicans will want to focus voters’ minds on immigration, crime and a messy withdrawal from Afghanistan that they will portray as a kind of metaphor for disappointing Democratic leadership.”

Gallup: “On average, Americans’ political party preferences in 2021 looked similar to prior years, with slightly more U.S. adults identifying as Democrats or leaning Democratic (46%) than identified as Republicans or leaned Republican (43%).”

“However, the general stability for the full-year average obscures a dramatic shift over the course of 2021, from a nine-percentage-point Democratic advantage in the first quarter to a rare five-point Republican edge in the fourth quarter.”

New York Times: “The doubts Mr. Trump amplified about public health expertise have only spiraled since he left office. Now his defense of the vaccines — even if often subdued and almost always with the caveat in the same breath that he opposes mandates — has put him uncharacteristically out of step with the hard-line elements of his party’s base and provided an opening for a rival.”

WYOMING AT LARGE CD. Rep. Liz Cheney (R-WY) told Politico that her own state party chair, who is trying to oust her from office, is also a member of the Oath Keepers.

Said Cheney: “If you look at the fact that you’ve had a number of Oath Keepers indicted by the Department of Justice for a range of charges, including seditious conspiracy… it’s very clearly an organization that ought to be renounced, that ought to be rejected.”

She added: “I think it is concerning that the head of the state Republican Party in Wyoming is apparently, reportedly a member of that organization.”

Politico: “Republicans have mostly played it safe in the states that have completed redistricting so far, locking in the status quo with durable maps that are more likely to withstand demographic changes and legal muster. But amid a growing sense of frustration that the party is squandering its advantage, some in the GOP are advocating for a new level of ruthlessness. It’s a stance driven by a desire to appease an activist base, bolster ambitious politicians and gain retribution against audacious Democratic gerrymandering in blue strongholds.”

“Pro-Trump commentators’ hopes of developing major followings on right-leaning websites after they left Facebook and Twitter have run up against a harsh reality: Their audiences on those sites have stagnated,” the Washington Post reports.

“A Washington Post analysis of audience data for 47 prominent right-wing influencers who flocked last year to alternative social networks Gab and Gettr, the video-streaming site Rumble and the chat service Telegram found that their followings surged immediately after President Donald Trump was banned on the mainstream sites.”

“But those audiences have barely grown in the year since. In some cases, they even declined.”

ARIZONA 6TH CD. Republican state Sen. Kelly Townsend, who has a long history of spreading lies about the 2020 election and trying to undermine vaccinations, said Monday that she would run for the new and swingy 6th District―a southern Arizona constituency that local NBC reporter Brahm Resnik says is about 50 miles away from her home in the Mesa area. Townsend will take on Juan Ciscomani, a former senior advisor to Gov. Doug Ducey who has the backing of the major GOP super PAC Congressional Leadership Fund, in the August primary.

Townsend, who chairs the Senate Government Committee, spent the weekend before her announcement at Trump’s rally in the state, and she used her speech to further spread The Big Lie. “What do we want? Indictments!,” Townsend said, adding, “When do we want them? Now!” In case it wasn’t clear what she meant, the state senator continued, “We want indictments of the election workers so that they don’t continue to do this.” Last year, Townsend also took issue with a billboard reading, “Want to return to normal? Get vaccinated.” She tweeted, “Seen in Communist China today. Oops, I mean Arizona.”

MICHIGAN 12TH CD. Former state Rep. Shanelle Jackson has announced that she’ll seek the Democratic nomination for the redrawn 12th District, where Rep. Rashida Tlaib is seeking re-election. The two faced off in 2018 in the very crowded open seat race for the old 13th, but while Tlaib ended up edging out Detroit City Council President Brenda Jones by a tight 31-30 margin, Jackson finished a distant sixth with just 5%.

MICHIGAN 8TH CD. Bill Schuette, who was the 2018 Republican nominee for governor, announced Tuesday that he wouldn’t take on Democratic Rep. Dan Kildee in the new 8th District after all. Kildee already faces a challenge from former Trump administration official Paul Junge, who lost a close 2020 battle against Rep. Elissa Slotkin in the old 8th.

NEW JERSEY 11TH CD. Republican Assemblywoman Aura Dunn, who is a former lobbyist for Sesame Street’s Sesame Workshop, told the New Jersey Globe on Friday that she was interested in taking on Democratic Rep. Mikie Sherrill in the new version of this seat, which would have backed Joe Biden 58-41.

The site also reports that Dunn the next day appeared before the Passaic County GOP’s screening committee, which is the first step towards getting the county party’s important endorsement line, and told its members, “Once again, my name is Aura Dunn, and I am running for Congress.” Despite that seemingly firm declaration, though, she has yet to make any public announcement.

NEW JERSEY 6TH CD. Monmouth County Commissioner Sue Kiley announced Tuesday that she would seek the Republican nomination to take on Democratic Rep. Frank Pallone, an 18-term incumbent and House Energy and Commerce Committee chair who has won re-election easily for decades. The boundaries of the 6th District, which includes Northern Middlesex County and the northern Jersey Shore, didn’t change much in redistricting, but it did become slightly bluer: Under the old lines, it voted for Joe Biden 57-42, but the new version would have gone for Biden 59-40. The New Jersey Globe also says that Democratic Gov. Phil Murphy won 53% last year in the new 6th.

On the Republican side, state Rep. Anthony Sabatini, a far-right bomb thrower who launched a bid against Murphy well before she retired, said that, while he wouldn’t commit to running in any specific constituency before redistricting was done, “I do know my strong plan now, no matter what it looks like, is to run for the seat that’s dominantly Seminole County.” Sabatini continued, “And if it gives the Democrats an advantage built in, I’m fine with that. Because it’s going to be a very strong year for Republicans.”

FLORIDA 26TH and 27th CD. Former Rep. Debbie Mucarsel-Powell, a Democrat who narrowly lost re-election last cycle in the 26th District, responded to a Miami Herald inquiry about another congressional campaign by saying, “I will be making an announcement very shortly on what I’ll be doing … Within the next week or so.” Florida’s GOP-dominated legislature is currently working on redistricting.