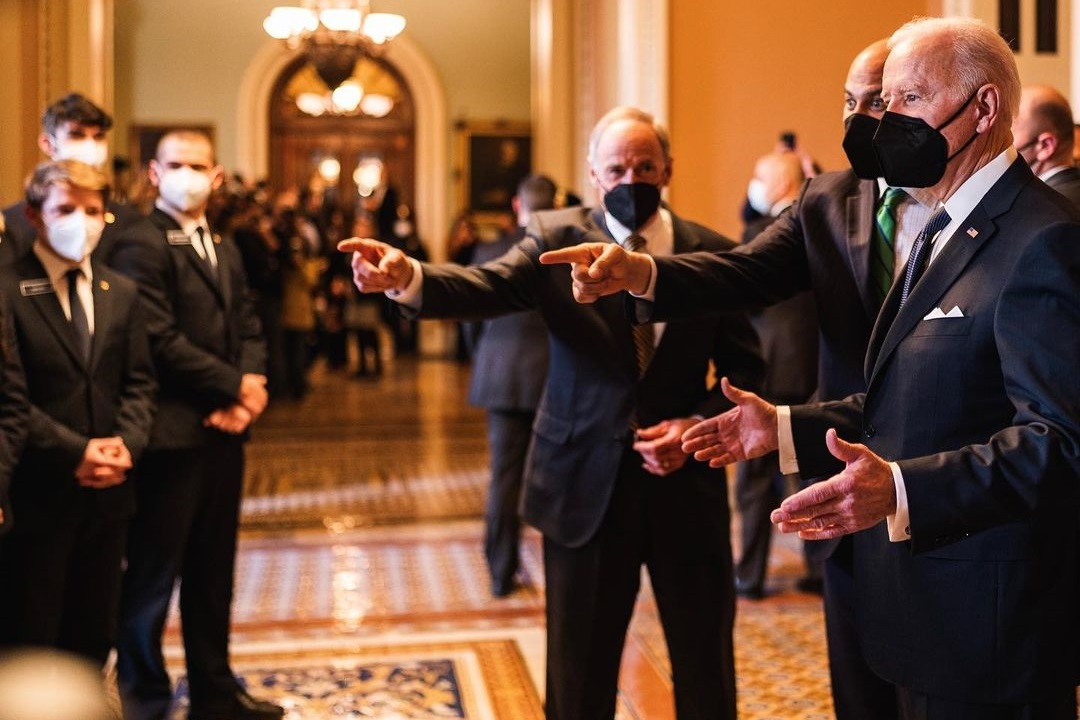 Jonathan Bernstein: “The model Biden should probably be thinking about is Ronald Reagan. At this point in his presidency, two of Reagan’s major legislative initiatives had passed, and he had some other accomplishments, but things were turning sour. What turned out to be a deep recession began in the summer of 1981, his first year in office, and continued through the 1982 midterm elections.”

“Reagan, however, had a very good team in place in the White House, and his theme became asking people to ‘stay the course.’ That was useless for the midterms, where Republicans did poorly. But the point isn’t about messaging and spin. It’s that along with some smart corrections — accepting a tax increase to put fiscal policy back on course, upgrading the Secretary of State position — Reagan was well served by showing patience and avoiding panic…”

“Emulating Reagan shouldn’t lead to complacency. But the Reagan example is a good reminder that when things are going badly in the nation, the president will get the blame whether it’s deserved or not, and once approval ratings sag then everyone in Washington starts to see everything the president does in a bad light.”

“The retired federal judge assigned to review the contents of 18 electronic devices seized from Rudy Giuliani’s home and offices in Manhattan last spring has withheld about half of what former president Donald Trump’s personal lawyer argued should be kept out of the hands of investigators because it was privileged,” the Washington Post reports.

“More than 3,000 communications were released to prosecutors.”

Igor Fruman, a former associate and close ally of Rudy Giuliani, was sentenced on Friday to one year in prison for a case involving illegal campaign contributions from a foreign national, the AP reports.

The judge’s ruling said that the case wasn’t about whether people should be vaccinated, “it is instead about whether the President can, with the stroke of a pen and without the input of Congress, require millions of federal employees to undergo a medical procedure as a condition of their employment.”

“A flurry of decisions by the Supreme Court and federal and state investigators have forced Donald Trump and his adult children to defend their conduct on multiple fronts, potentially jeopardizing their futures — or perhaps yet again allowing the former president to escape unscathed,” the Washington Post reports.

Daily Beast: “Ivanka Trump has largely avoided the national spotlight for the last year. Now, investigators in two separate probes think she could be key to her father’s undoing.”

A group of men detained at an Arkansas jail say that the facility’s medical staff gave them the anti-parasite drug ivermectin last year, without their consent, to treat COVID-19, while telling them the pills were “vitamins,” CBS News reports.

“South Dakota Gov. Kristi Noem (R) on Wednesday slammed how fellow Republicans are handling an impeachment probe of the state’s attorney general for his role in a fatal car crash, alleging members of a House investigative committee are questioning law enforcement rather than focusing on the official’s conduct,” the AP reports.

Inaugural poet Amanda Gorman writes in the New York Times that she considered pulling out from the event for fear of what would happen.  Said Gorman: “I was scared of failing my people, my poetry. But I was also terrified on a physical level.”  She added: “I did know at the inauguration I was going to become highly visible — which is a very dangerous thing to be in America, especially if you’re Black and outspoken and have no Secret Service.”

“Former Attorney General William Barr has a memoir coming out March 8 titled One Damn Thing After Another, and billed by his publisher as a ‘vivid and forthright book’ of his time serving two ‘drastically different’ presidents, Donald Trump and George H.W. Bush,” the AP reports.  “The title of the long-rumored book refers to an expression Barr had heard about the nature of the job of attorney general.”

“Vice President Kamala Harris’ new communications director is set to meet this week with Latino lawmakers to explain past tweets about immigrants as he continues to face pressure from Latino leaders and organizations to explain himself,” CBS News reports.

“The U.S. midterm elections are some 10 months away, but President Joe Biden’s administration and allies already foresee a possible scenario in which Republicans take the House of Representatives, the Senate, or both, and launch a series of investigations and attempts to impeach the president,” Reuters reports.

From a new study in Nature: “Misinformation has been identified as a major contributor to various contentious contemporary events ranging from elections and referenda to the response to the COVID-19 pandemic. Not only can belief in misinformation lead to poor judgements and decision-making, it also exerts a lingering influence on people’s reasoning after it has been corrected — an effect known as the continued influence effect.”

Rep. Lauren Boebert left a group of Jewish visitors to the Capitol bewildered Thursday morning when she asked them if they were doing “reconnaissance” after seeing them at an elevator at the Capitol, BuzzFeed News reports.

Rep. Jamaal Bowman (D-NY) was arrested Thursday while participating in a voting-rights protest near the Capitol, the Washington Post reports.

“An American Airlines flight to London from Miami turned around about an hour into its journey on Wednesday night because of a passenger who refused to follow coronavirus masking rules,” the New York Times reports.