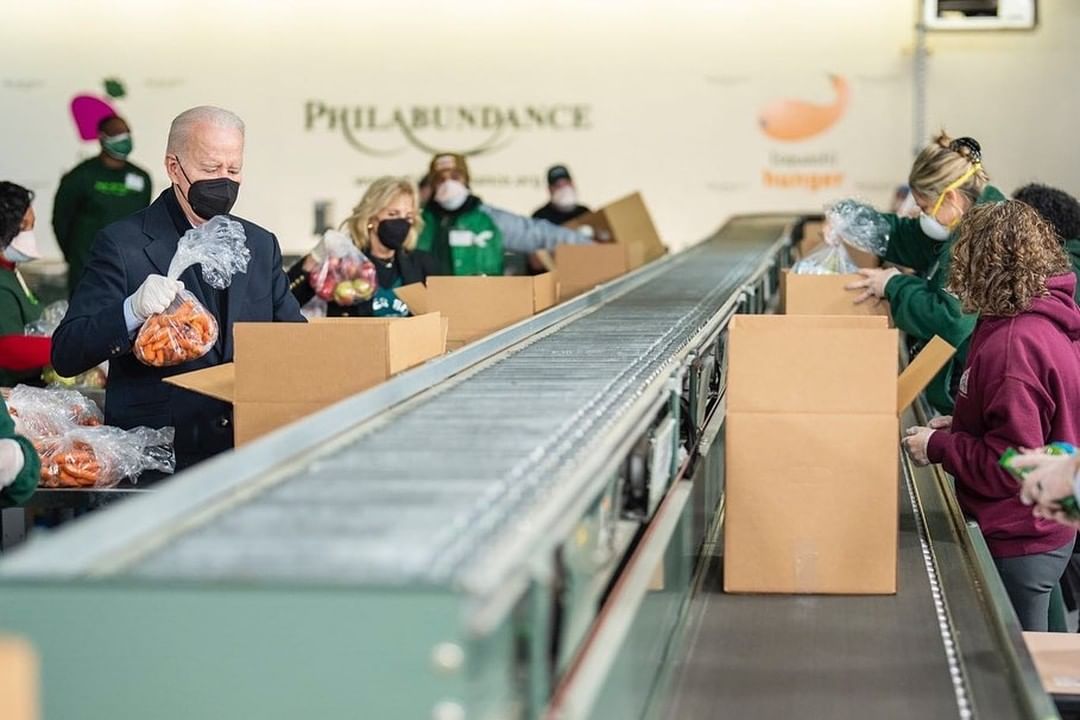 A new Politico-Morning Consult poll finds 68% of voters say the country is on the wrong track.

And a warning sign for the White House: 49% of voters disagreed with the statement that President Biden is mentally fit.

Associated Press: “It is a perilous time for Biden: The nation is gripped by another disruptive surge of virus cases and inflation is at a level not seen in a generation. Biden’s approval rating has fallen sharply over his first year in office and Democrats are bracing for a potential midterm rout if he can’t turn things around.”

Top Democratic politicians, campaign officials and operatives tell CNN that the White House political operation “is heading into the midterms unprepared and unresponsive even to basic requests for help or information.”

A new Gallup poll finds President Biden’s job approval dropped a net eight points in the last month to 40% to 56% — the worst approval of his presidency.

Washington Post: Inside Biden’s declining popularity as he struggles with multiple crises.

A One America News host, who recently conducted an interview with former Donald Trump, likened him to Jesus on a recent broadcast.

Aaron Rupar: “Put bluntly, OAN is Trump cult TV. Like the Republican Party, which didn’t have a platform in 2020 and won’t have a legislative agenda to run on this year, its programming doesn’t have a coherent identity beyond Trump worship and owning the libs.”

Said Bannon: “You’re not a news organization. What the Murdochs want is the—they want a Glenn Youngkin, or they want some nice guy who will sit there and give them tax cuts and deregulation.”

He later wrote on Gettr: “Fox News, which did not give one second of coverage to Donald J. Trump’s massive rally, showed no respect to anyone in the MAGA movement.”

Nathaniel Rakich: “Many analyses of congressional redistricting so far have tried to sum the situation up into a single sentence. While we understand the urge, it’s increasingly the case that there is no one takeaway from the 2021-22 redistricting cycle.”

“In reality, the picture is complicated: Democrats have gained seats based on partisanship alone … but Republicans have gained when you factor in which party currently holds the seat. The House map’s long-term Republican bias has lessened somewhat … but it’s still not an even playing field. Swing seats are getting redrawn to be safer for Democrats … but light-red seats are also being redrawn to be safer for Republicans.”

“The Texas Secretary of State’s office is having more trouble than usual getting enough voter registration cards to groups who help Texans register to vote,” KUT reports. Said a spokesman: “We are limited in what we can supply this year, because of the paper shortage and the cost constraints due to the price of paper and the supply of paper.”

The spokesperson pointed to Texas’ new restrictive voting law as the reason why the office had to change its registration forms, which advocacy groups are now struggling to obtain.

The president of the League of Women Voters of Texas, a voting rights group, says the Secretary of State’s office told her to look for donations instead of relying on the government for the forms, according to Austin’s NPR affiliate. Yes, really.

Texas is one of the few states that still require voters to use paper forms to register. There’s no website for Texans to do the whole process online. Democrats’ sweeping voting rights legislation would require all states to offer online registration.

We’re seeing other early signs of problems stemming from the law, too: Clerks sounded the alarm over the last few days about a massive spike in the rejection of absentee-ballot request forms, TPM’s Matt Shuham reports.

“This is what voter suppression looks like,” Travis County Clerk Dana DeBeauvoir said at a press conference.

“Election officials in a rural Georgia county are weighing plans to close all but one polling place ahead of this year’s elections, alarming local voting and civil rights groups,” CNN reports.

“But Wednesday’s vote by the Lincoln County elections board has reverberated far beyond this Georgia community of roughly 7,700 northwest of Augusta. The county is one of six in this battleground state that have disbanded or reconfigured their local election boards in the last year, thanks to recently passed bills by the Republican-controlled Georgia General Assembly.”

FLORIDA 20TH CD. Rep. Sheila Cherfilus-McCormick (D-FL) was sworn in as the newest member of the House on Tuesday, the AP reports.

“She’ll boost the Democrats’ slender House majority to 222-212, leaving room for no more than four Democratic defections as Speaker Nancy Pelosi tries moving her party’s bills through the House. For much of 2021, that margin was three.”

“Joe Manchin made clear that his party’s push to isolate him and fellow centrist Kyrsten Sinema won’t force his hand on rules changes, once again rejecting Democrats’ proposed reforms to the Senate’s filibuster rules,” Politico reports.

“The West Virginia Democrat actually seems to welcome the isolation. He told reporters ahead of a Democratic Caucus meeting he would not go along with instituting a talking filibuster, which could be used to evade the Senate’s 60-vote threshold, nor would he entertain a rules change by a simple majority.”

NEW YORK GOVERNOR. New York Gov. Kathy Hochul (D) has raised $21.6 million for her reelection campaign — “a record-smashing sum that positions her as the prohibitive favorite to win a full term as governor this fall,” the New York Times reports.

“House Republicans are edging toward harder hits at President Joe Biden while he struggles to contain Covid’s Omicron variant. Just don’t expect it to become a centerpiece of their midterm-election messaging,” Politico reports.

“That’s in part because the GOP has to walk a fine line on the pandemic — thanks to Donald Trump.”

One problem: “Members say it wouldn’t resonate well with their base, compared with issues like the economy, education and national security. Republicans also see it as a tough point to underscore given their broad dismissal of Covid precautions after the nation’s first round of vaccinations, as well as their growing rebukes of mask and vaccine mandates.”

NEW YORK 24TH CD. New York Rep. John Katko, who was one of just nine House Republicans to win election in 2020 in a district that also voted for Joe Biden, announced Friday that he would not seek a fifth term in the Syracuse-based 24th Congressional District. Katko was also one of the 10 GOP members who voted to impeach Donald Trump last year, a decision that almost certainly would have ensured serious opposition in the June primary; two other members of this group, Ohio’s Anthony Gonzalez and Illinois’ Adam Kinzinger, previously decided not to run for re-election.

It remains to be seen, though, just what will happen to Katko’s constituency. The current version of the 24th backed Biden 53-44, but as Katko’s resilience demonstrates, the area remains quite friendly to Republicans downballot. Democrats in the state legislature could, however, decide to make the district bluer once redistricting gets underway.

The Democratic primary already consisted of a trio of veterans from three different branches: Francis Conole (Navy), Steven Holden (Army), and Sarah Klee Hood (Air Force), and more will likely take a look now. On the GOP side, Katko’s leading intra-party foe looked like physician assistant Tim Ko, though the race was still coming together when the congressman called it quits.

CALIFORNIA 5TH, 9TH and 13TH CD. Democratic Rep. Jerry McNerney, who got to Congress in 2006 by unseating a longtime Republican incumbent, announced Tuesday that he would not seek another term in California’s redrawn 9th District, a new seat that shares the same number as his current constituency. Minutes later, fellow Democratic Rep. Josh Harder declared that he’d run to succeed McNerney rather than continue with his previously announced campaign for the revamped 13th District just to the south, a move that will set off an open seat race for the latter district.

Harder’s move is a bit surprising. His old district, numbered the 10th, was chopped up during redistricting, leaving him representing just 31% of the new 13th, located in the mid-Central Valley. But an even smaller share of his current constituents—just 27%—wound up in the new 9th, which is based around the city of Stockton. (A 43% plurality of Harder’s existing 10th District wound up in the new 5th, a safely red seat where GOP Rep. Tom McClintock is reportedly seeking another term.)

The new 13th also contains Harder’s hometown of Turlock, though he sought to emphasize his ties to the new 9th by saying, “150 years ago my great-great-grandpa settled in Manteca to start a peach farm and raise his family.” Politically, the two districts are very similar on the presidential level, with the 9th a touch bluer: It would have backed Joe Biden 55-43, compared to 54-43 for Biden in the 14th. The 9th, however, is much more compact and closer both to Sacramento and the Bay Area; for whatever reason, Harder decided he preferred it to the 13th.

Democratic Assemblyman Adam Gray, who has been one of the most prominent business-friendly moderates in the state capitol, responded to Harder’s announcement in turn by almost immediately launching a bid for the 13th with an endorsement from Rep. Jim Costa. Gray, as we’ve noted before, represents 60% of the 13th in the legislature, which could give him a big edge in the June top-two primary.

GV Wire also reports that prosecutor Andrew Janz, who ran an expensive 2018 race against then-GOP Rep. Devin Nunes in the old 22nd District, is also considering the new 13th. Janz held Nunes to a 53-47 in that reliably red seat, but he went on to lose the 2020 officially nonpartisan contest for mayor of Fresno 52-40 against Republican Jerry Dyer. California’s filing deadline is in mid-March, so any potential candidates have about two months to make their decisions.

Former Trump administration official Ricky Gill, whose plans to run for Congress were disrupted by redistricting, announced Thursday that he would not be running anywhere this year, saying, “Now becomes the time for my contributions to manifest outside the political arena.”

Gill had announced a campaign last year against Democratic Rep. Josh Harder in the old 10th, a swing seat that had backed Joe Biden just 50-47, but he seemed uninterested in pursuing Harder into the new—and far more Democratic—13th District. In a statement, Gill only referenced a possible run in the 5th District, a solidly red seat, because such a bid would bring him into conflict with Republican Rep. Tom McClintock.

Two more House Democrats — Reps. Jerry McNerney (D-CA) and Jim Langevin (D-RI) — announced that they will not run for re-election.  There are now 28 House Democrats who have decided not to run again.

Politico: “At this point in the 2018 cycle, 31 House Republicans had announced their retirement plans. Most of the Democrats heading for the exits hold seats that should be retainable for the party, as is the case with both of these.”

RHODE ISLAND 2ND CD. Rhode Island Rep. Jim Langevin, a Democrat whose 2000 win made him the first quadriplegic to ever serve in Congress, said Tuesday that he would retire from the 2nd District.

The current version of this seat, which includes part of Providence and western Rhode Island, backed Joe Biden by a 56-43 spread four years after it favored Hillary Clinton by a smaller 51-44 margin. The redrawn 2nd will almost certainly look almost identical because the state’s redistricting commission recently advanced a map that made only minimal changes to Rhode Island’s two seats, though the Democratic-run legislature still needs to approve new boundaries.