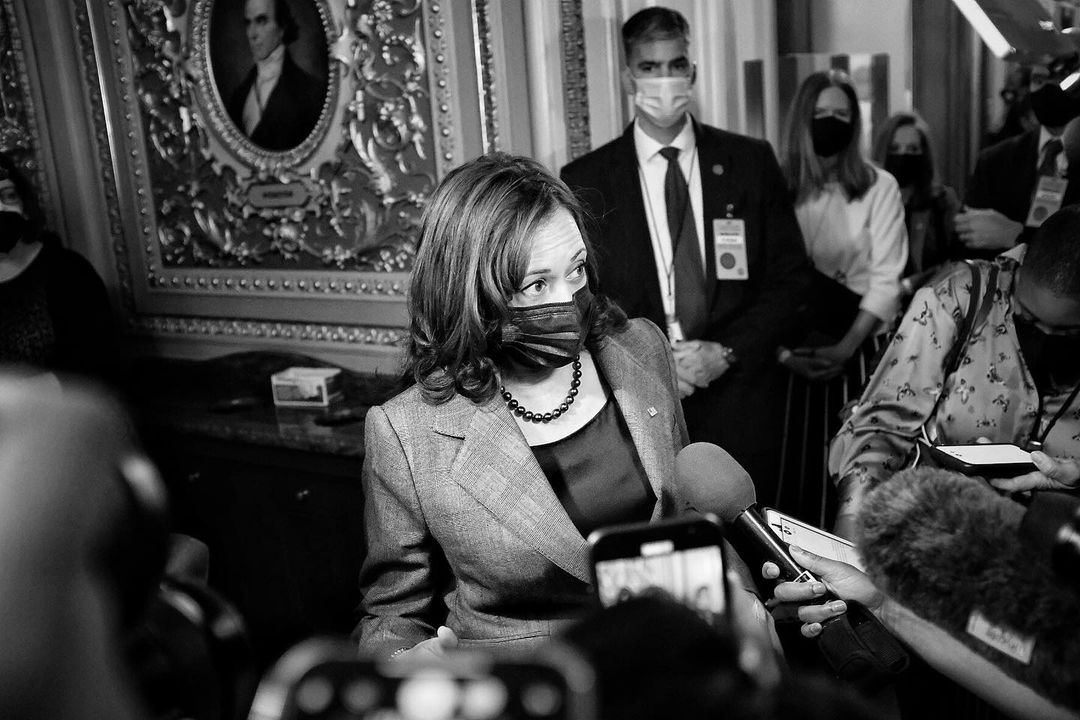 A new survey finds trust in government is collapsing, especially in democracies,  Axios reports. “People also don’t think media or business leaders are telling them the truth, and this suspicion of multiple societal institutions is pushing people into smaller, more insular circles of trust.”

Key finding: A majority of people globally believe journalists (67%), government leaders (66%) and business executives (63%) are “purposely trying to mislead people by saying things they know are false or gross exaggerations.”

A new Data for Progress poll finds 67% of Americans are in support of banning lawmakers from trading stocks. That figure jumped to 74% when voters were given reasons for and against a ban.

“She has the support of 46 percent of Democrats, compared to 12 percent for former New York City Mayor Bill de Blasio, 11 percent for New York City Public Advocate Jumaane Williams, and six percent for Rep. Tom Suozzi, with 24 percent unsure or naming another candidate.”

LOUISIANA U.S. SENATOR. Gary Chambers (D), who is running to unseat Sen. John Kennedy (R-LA), unveiled a new ad in which he is shown smoking marijuana.

TEXAS GOVERNOR. Beto O’Rourke (D) raised $7.2 million in the first 46 days of his campaign for governor, more than any previous Democratic gubernatorial hopeful in Texas took in “during the opening days of their race,” the Dallas Morning News reports.

Former state Sen. Don Huffines’ newest commercial ahead of the March 1 Republican primary emphasizes his support from Kentucky Sen. Rand Paul and pledges he’ll “end vaccine mandates.” The spot also shows a photo of Gov. Greg Abbott wearing a face mask as the narrator quotes Paul saying that “when other Republicans are siding with Dr. Fauci, Don Huffines stood for your freedom.” The campaign says the ad is running on Fox, but there’s no word on the size of the buy.

NEW HAMPSHIRE U.S. SENATOR. New Hampshire Gov. Chris Sununu (R) told the Washington Examiner that was on the verge of running for Senate and but then he talked it over with Republican senators.

Said Sununu: “They were all, for the most part, content with the speed at which they weren’t doing anything. It was very clear that we just have to hold the line for two years. OK, so I’m just going to be a roadblock for two years. That’s not what I do.”

Londonderry Town Manager Kevin Smith has confirmed he’ll seek the GOP nod to take on Democratic Sen. Maggie Hassan and will also step down from his current post in March to focus on the race. He joins a primary field that includes state Senate President Chuck Morse and retired Army Brig. Gen. Donald Bolduc, who unsuccessfully sought the Republican nomination for Senate in 2020.

PENNSYLVANIA U.S. SENATOR. Philadelphia Mayor Jim Kenney (D) endorsed Rep. Conor Lamb (D-PA) for U.S. Senate, the Philadelphia Inquirer reports. Said Kenney: “I wanna win. I don’t wanna be a mercenary about it — all the things I like about him are true — but as much as I respect everybody else in the Dem field, I believe he’s the person that can win.”

Army veteran Sean Parnell, who dropped his bid for Senate in November after a judge concluded he’d abused his wife and children, has endorsed hedge fund manager Dave McCormick’s new campaign for the GOP nod. (In Trumpist politics, winning the endorsement of an abuser is good, actually.)

Meanwhile, a pro-McCormick group called Honor Pennsylvania is spending $900,000 to air a new ad attacking primary rival Mehmet Oz as a “Hollywood liberal” because he owns a company “that pled guilty to criminal charges for hiring and rehiring illegal immigrants.” Oz, though, is by no means outgunned: The wealthy TV doctor has already spent or booked $5 million in airtime, according to the Philadelphia Inquirer.

ARIZONA U.S. SENATOR. EMILY’s List put out a statement threatening to pull its endorsement of Sen. Kyrsten Sinema (D-AZ) unless she relents on her opposition to changing the filibuster in order to advance voting rights legislation.

Even though term-limited Gov. Doug Ducey said a year ago, “I’m not running for the United States Senate” against Democratic incumbent Mark Kelly, Politico reports that some Arizona politicos think he might still change his mind. The chief evidence for this speculation seems to be Ducey’s final State of the State address, which he devoted to attacking Joe Biden rather than focus on local politics.

A Ducey spokesperson “did not respond to requests for comment,” but if the governor is having second thoughts, he’ll have to make up his mind soon, since Arizona’s filing deadline is in early April. The biggest issue, of course, remains Donald Trump, who despises Ducey and has publicly berated him on multiple occasions. While a late Ducey entry might prompt some current candidates to drop out, you just know that at least one Trump die-hard would stay in and hope to win the nomination with Trump’s support (or more likely, his continued abuse of Ducey).

“Vermont Gov. Phil Scott (R) wants his state to become the latest to conduct all elections entirely by mail, a move he says would expand voter access and turnout at a time when many Republican-led states are debating restrictions on absentee ballots,” The Hill reports.

“Donald Trump is trashing Ron DeSantis in private as an ingrate with a ‘dull personality’ and no realistic chance of beating him in a potential 2024 showdown,” Axios reports.

“The two are among the most popular Republicans in the country, and as the former president eyes another run in 2024, he’s irked by DeSantis’ popularity and refusal to rule out running against him.”

Jonathan Last: “You’re not supposed to remember this, but DeSantis is a smarty-pants, Ivy League elite lawyer who is playacting as a populist crusader. Trump is the real thing.”

“Just look at the booster stuff: DeSantis almost certainly got the booster. But he’s now caught in No Man’s Land where he has positioned himself as quasi anti-vax, even though he’s received the vaccines.”

“Or look at the anti-lockdown rhetoric: DeSantis is pushing revisionist history about how he refused to impose any sort of precautions in Florida.”

“If this turns into a hot war, Trump is going to crush him. Maybe it’s possible to outflank Trump on vaccines, but not if you’re a phony who took the vaccines. Republican primary voters will smell that a mile away.”

As soon as there were national news stories about Gov. Ron DeSantis’ (R) presidential ambitions, it was only a matter of time before Donald Trump would start trashing the Florida governor. DeSantis, who is clearly one of the strongest GOP presidential prospects, made the crucial mistake of not deferring to Trump’s own wishes first. And that means Trump is only going to escalate his rhetoric against DeSantis.

If Trump takes his fight public, DeSantis will be forced to either hit back and escalate the tension, or to ignore it and be asked about it endlessly. Either way it will make him look weak. DeSantis is running for re-election and doesn’t need the distraction of feud with Trump. The smart thing politically would be to stand aside. DeSantis can then reconsider whether he can win a fight with Trump sometime after he’s likely re-elected this fall.

Charlie Sykes: “You could see the GOP future in the whole show: a rally that featured all the misfit toys embraced by the Once and Future God King. The My Pillow Guy, Mike Lindell, was there, and treated like a rock star rather than a mental patient off his meds. Indeed, Trump’s rally featured the whole pantheon of deplorability; Rep. Andy Biggs and Rep. Paul Gosar were there, along with the state’s batty party chair, Kelli Ward.”

“Even as he lashed out at Arizona Governor Doug Ducey — a ‘terrible representative of your state’ — Trump embraced State Senator Wendy Rogers, one of the wooliest conspiracy theorists extant in American politics. And that’s really saying something.”

“And, of course there was the Trump-backed candidate for governor, Kari Lake, who seems to have a fetish for jailing people she doesn’t like.”

Fox News host Laura Ingraham told Northern Virginia Magazine that she is not committing to supporting former President Donald Trump if he runs for reelection in 2024.

Said Ingraham: “I’m not saying I’m there for him yet. But I think whether he runs or not—I mean, his policies worked. Trump’s blueprint for policy — a forward-looking, optimistic set of pro-America policies — that blueprint, without a doubt, is winning.”

SOUTH DAKOTA U.S. SENATOR. A pro-Trump group called the American Potential Fund has been circulating a poll trying to demonstrate that Republican Sen. John Thune would be vulnerable to a potential primary challenge from either Gov. Kristi Noem or Rep. Dusty Johnson, but no one is biting. Johnson immediately responded, “It doesn’t matter what the polls say, I’m not running for Senate.” Noem, meanwhile, emphatically rejected a bid against Thune a year ago and did not respond to a request for comment from NBC, which first reported on the poll.

Politico: “A star of the coronavirus pandemic, Noem had become an unexpected Republican sensation in 2020 and into last year, at the height of partisan warring over the pandemic. As she theatrically defied mask and vaccine mandates and cast South Dakota as a ‘beacon of hope’ for the skeptical and recalcitrant, she became a staple on Fox. CNN branded her ‘the female Trump,’ while Trump himself encouraged Noem to primary her state’s ‘RINO‘ senior senator, John Thune (an invitation Noem declined). GOP state and county party chairs in early presidential nominating states began inviting Noem to speak at their events, and her stock rose among the Conservative Political Action Conference set. Last summer, she earned a personal takedown in the impeccably parlor-liberal pages of Vanity Fair — a badge of honor for any Republican.”

“But sustaining the GOP’s interest has proved more difficult as the pandemic lingers on. Noem has some built-in disadvantages as a national candidate: Her tiny state is not a locus of coastal media attention; its small agricultural economy limits her natural fundraising base. And even in South Dakota, Noem has suffered from a shift in public focus from Covid freedom to concerns that have proved harder for her to manage.”

Out this week: Fight: How Gen Z Is Channeling Their Fear and Passion to Save America by John Della Volpe.

“Since they were born, Generation Z — those born from the late 1990s to early 2000s — have been faced with an onslaught of turmoil, destruction and instability unprecedented in modern history. And it shows: they are more stressed, anxious, and depressed than previous generations, a phenomenon John Della Volpe has documented heavily through decades of meeting with groups of young Americans across the country.”

“But Gen Z has not buckled under this tremendous weight. On the contrary, they have organized around issues from gun control to racial and environmental justice to economic equity, becoming more politically engaged than their elders, and showing a unique willingness to disrupt the status quo.”