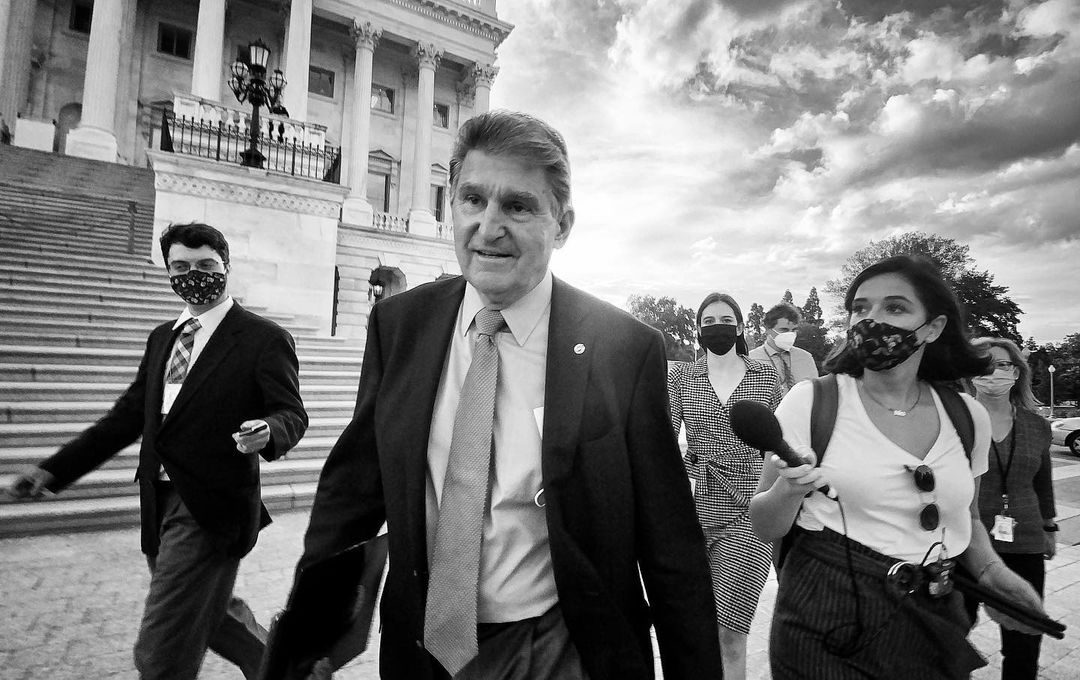 A new CBS/YouGov poll finds that among respondents who said President Biden is doing a bad job handling the pandemic, 69% said “information has been confusing.”

“As the anniversary of President Biden’s inauguration approaches this week, American opinion of his efforts to contain the pandemic is lower than ever,” according to a CBS News/YouGov poll.

“The poll, released on Sunday, found just 36% of respondents believed U.S. efforts to deal with the coronavirus was ‘going well.’ Just 49% of Americans approved of the president’s management of the pandemic, compared to 66 percent of Americans who gave the same response in July, in a previous version of the poll.”

“Among the requests of these so-called ‘front-liner’ Democrats is to break up President Biden’s sprawling Build Back Better spending bill that has stalled in the Senate amid opposition from Sen. Joe Manchin (D-WV) and hold votes on a series of politically popular provisions that would appeal to centrist voters and core Democrats alike.”

“These members have argued to top House leaders in recent days — so far, to no avail — that holding votes on narrow measures such as curbing prescription drug costs and extending the child tax credit would help Democrats make a case that they can improve voters’ lives economically despite soaring inflation and other issues that have dragged down Biden’s approval ratings.”

MARYLAND U.S. SENATOR. Maryland Gov. Larry Hogan (R) would not say if he plans to file to run for U.S. Senate by next month’s deadline, The Hill reports.  However, earlier in the interview, the governor reiterated that serving in the Senate is “not something I aspire to.”

PENNSYLVANIA U.S. SENATOR. David McCormick, who recently stepped down as chief executive of the hedge fund giant Bridgewater Associates, on Thursday finally launched his campaign to win the May Republican primary in Pennsylvania’s closely-watched Senate contest. McCormick already has spent $2.3 million in TV ads since late December ahead of his announcement, but he’s now taking fire for the first time. American Leadership Action, a super PAC set up to help TV personality Mehmet Oz win the nomination, has begun a $550,000 ad campaign that excoriates McCormick as a pro-China rich guy who “cut Pittsburgh jobs only to create new jobs overseas, all to make a buck.” The narrator adds, “McCormick even criticized President Trump’s China policy. No wonder Trump fired him.” (That last line goes unexplained.)

McCormick can expect a whole lot more to come his way as he dukes it out with Oz and plenty of others in the primary. While the former hedge fund head is originally from Pennsylvania, he lived in Connecticut for years through 2021. Indeed, Politico identified McCormick as a Connecticut resident just a little over two months ago when it first talked about his potential candidacy, though he has since bought a home in the Pittsburgh area. (Oz, who is also self-funding, has even weaker ties to the Keystone State.)

Politico also highlighted some potentially far larger liabilities for the new contender in a separate story from earlier this week. In 2017—well after most Republicans accepted that they needed to be Trump sycophants in order to advance in party politics—McCormick said of the previous year’s election, “I wasn’t particularly involved with the Trump camp—I wasn’t a Trump supporter.” And last year, in addition to saying he “really appreciated Biden’s tone,” the Republican argued that Trump bore “a lot of responsibility” for the “divisiveness” that had occurred during his time in the White House.

McCormick, perhaps belatedly, now realizes that sucking up to Trump offers him his best path to victory in the primary, and he’s been doing what he can to, as Politico puts it, give his campaign some “MAGA-proof[ing].” McCormick, who now promotes himself as an “America First” contender, has enlisted some of Trumpworld’s most infamous names as official and unofficial advisors including Stephen Miller, Kellyanne Conway, and Arkansas gubernatorial frontrunner Sarah Huckabee Sanders. The candidate’s wife, Dina Powell McCormick, also notably served as a Trump deputy national security adviser, while McCormick himself turned down Trump’s offer to be a deputy secretary of Defense.

It remains to be seen whether all of this will be enough to win the backing of Trump, whose endorsed candidate, Army veteran Sean Parnell, suspended his campaign in November after losing an ugly custody battle with his estranged wife. An unnamed source tells Politico that Trump did indeed watch the clip of McCormick blaming him for “divisiveness.” This person also relays that Trump reviewed more McCormick statements bashing him, though the contents and author of that document are unknown. They added that, while Trump didn’t seem to have a strong reaction afterward, “The sliding scale is the more recent your insults have been, the more they weigh … To that extent, it’s not great to be David McCormick today.”

NORTH CAROLINA U.S. SENATOR. A super PAC called Restore Common Sense has spent about $1 million on digital and radio ads to boost businesswoman Marjorie Eastman, who has barely registered in public polls of the race. The PAC’s treasurer is wealthy pharma executive Fred Eshelman, who gave $2.5 million to the group True the Vote in 2020, then unsuccessfully sued to recover his donation after claiming the organization—one of many that pursued bogus voter fraud claims following Joe Biden’s win—failed to spend the money as promised.

Case in point: A new survey from former Gov. Pat McCrory finds him leading Rep. Ted Budd 30-21, with Eastman at just 1%. Of note, though, McCrory appears to have switched pollsters: This newest poll is from Strategic Partners Solutions, while his last poll—which gave him a wider 40-25 advantage over Budd—was conducted by Public Opinion Strategies in October.

Meanwhile, a poll from Cygnal on behalf of the conservative think tank Civitas finds an even tighter race, with McCrory ahead of Budd just 24-19. (Eastman, by the way, once again clocks in at 1%.)

INDIANA 9TH CD. Brian Howey, who publishes the local tipsheet Howey Politics, reports that former GOP Rep. Mike Sodrel is considering a comeback bid in the 9th District, which is newly open due to Rep. Trey Hollingsworth’s unexpected retirement. Sodrel, now 76, ran five consecutive campaigns for a previous version of this southeastern Indiana seat—four of which were against Democrat Baron Hill—but only won once.

Meanwhile, Republicans got their first candidate on Thursday when state Sen. Erin Houchin announced her entry. Houchin lost the 2016 primary to Hollingsworth 34-25.

OREGON 6TH CD. Cryptocurrency developer Matt West announced this week that he’d raised more than $600,000 in the final quarter of 2020, but he didn’t mention in his press release that most of that haul was self-funded. The Willamette Week, however, reports that $437,000 came from the candidate, who is seeking the Democratic nomination in Oregon’s new 6th Congressional District.

Walter Shapiro: “In sharp contrast to everyone else doom scrolling about the pandemic, political handicappers seem determined to treat 2022 as an ordinary election year. As a result, we are awash in glib forecasts about how the inflation rate, Biden’s approval numbers, or the Democratic stalemate on Capitol Hill will determine the congressional elections.”

“But that’s like ignoring the Depression in making political predictions about 1932. So much depends on whether we will be fighting over remote learning and mask mandates this fall. All the experts bloviating on cable TV have no idea whether the pandemic will be raging or waning as Americans vote.”

VERMONT AT LARGE CD. Democratic state Sen. Kesha Ram Hinsdale, who would be the first person of color to represent Vermont in Congress, kicked off a bid for the state’s lone at-large congressional district this week. She joins two other prominent women in the primary, state Senate President Pro Tem Becca Balint and Lt. Gov. Molly Gray, all of whom would be the first woman elected to federal office in the state.

In an essay last year, Hinsdale described her background and upbringing in southern California, writing, “My Indian immigrant father and Jewish American mother ran an Irish pub in Los Angeles.” She moved to Vermont in the mid-2000s for college and first won a seat in the state House in 2008 at the age of 22. A 2016 bid for lieutenant governor, however, saw her finish a distant third for the Democratic nomination with 17% of the vote, though she bounced back with a victorious state Senate campaign in 2020.

TEXAS 15TH CD. Insurance agent Monica De La Cruz, the apparent frontrunner in the March 1 GOP primary, has released her first TV ad of the race. In the spot, she insists her grandmother “legally immigrated from Mexico” (emphasizing the word “legally”) but claims, “Joe Biden abandoned us, and our border, transforming our country with drugs, gangs, and violence.” There she features a notorious photo of three shirtless and tattooed men that’s long been a staple of racist GOP ads. That picture, by the way, was not taken in the United States any time recently but rather in a prison in El Salvador a decade ago by British photographer Adam Hinton.

“The campaign of former Rep. John Ratcliffe (R-TX) reported paying $11,000 for ‘website design’ to the technology firm that created a personal website for him, in a move that could violate campaign-finance rules,” Forbes reports.

“More than a year after stepping down from his role in Congress to serve as Donald Trump’s director of national intelligence, Ratcliffe still had access to a pile of money originally raised to support his congressional bids. He dipped into that stash to pay a company named Telegraph Creative. But Forbes found no evidence that Telegraph Creative did work on behalf of Ratcliffe’s old campaign. Instead, it seems more likely that the money went toward the cost of creating a personal website for Ratcliffe.”

“No one wants violence and I say all the time I am not a violent person. I hope to never see a Civil War in this country and that’s why you hear me toss around ‘national divorce.’”  — Rep. Marjorie Taylor Green (R-GA), on Sebastian Gorka’s podcast.

“As Donald Trump charts out his midterm elections strategy, his focus has turned to the contest for the Senate, not just in hopes of getting it back under GOP control but of having more compliant lawmakers there should he become president again,” Politico reports.

“Trump’s interest in the chamber stems in part from a lingering aggrievement he had over how his term in office went. Major agenda items were stymied there. And aides say Trump is determined to ensure that, should he end up back in the White House, that doesn’t happen again.”

“Rep. David Valadao (R-CA), one of the 10 House Republicans who voted to impeach former President Trump last year, announced on Wednesday that he would be running in California’s newly drawn 22nd congressional district,” The Hill reports.

“The South Carolina House on Wednesday adopted a controversial congressional map that could cement a 6-1 Republican majority in the U.S. House for years to come,” the Columbia State reports.