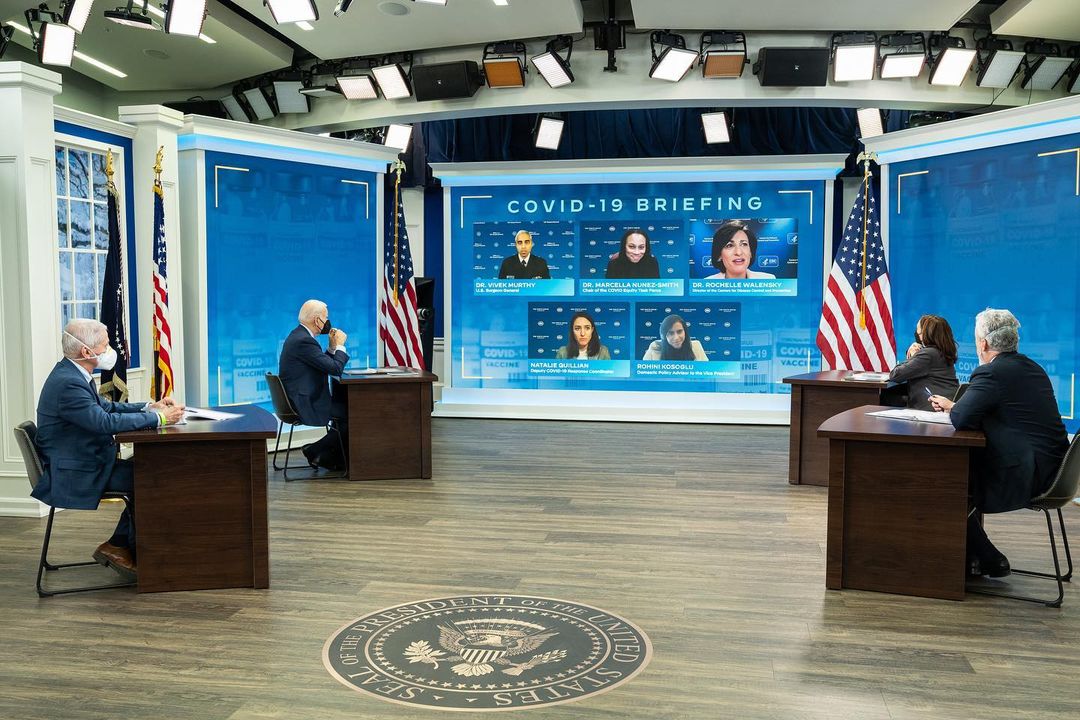 FiveThirtyEight: “It’s hard to know how this all factors into Biden’s job approval rating, but broadly speaking, the public is dissatisfied. And it has been for a while now, too, as Biden’s approval rating has hovered in the low 40s for nearly three months, with roughly 42 percent of Americans currently approving of his job performance and 51 percent disapproving.”

“Looking back at recent presidents, this development is particularly troubling for Biden, as he has the second-lowest approval rating of any president one-year in. Only Donald Trump, whose approval rating was in the high 30s, had a lower rating.”

The Economist: “Tempting as it always is to bash the politician, however, Mr Biden’s shortcomings are only a marginal reason for his unpopularity. The main one is the dismal reality that half the electorate was against him from the get-go.”

“This is a relatively new phenomenon. Mr Trump was the first modern president not to have been backed by a significant minority of his opponent’s supporters early in his term. By contrast, the fact that Mr Biden started out with an approval rate two percentage points higher than his share of the popular vote looked like an achievement. But relentless criticism and disinformation from the right soon reversed that.”

Rep. John Katko (R-NY), one of the 10 House Republicans who voted to impeach Donald Trump, announced that he will not seek re-election this year.

Kyle Kondik notes this makes Democratic gerrymandering efforts in New York easier because they don’t have to try to account for Katko’s proven crossover appeal in drawing the new map.

Rep. Fred Upton (R-MI), who voted to impeach Donald Trump, told CNN he is still undecided if he’s going to run for re-election.

NEW YORK GOVERNOR. Buffalo Mayor Byron Brown has endorsed Gov. Kathy Hochul, who is from the city, in her bid for a full term. The move is a snub of Rep. Tom Suozzi, who is challenging Hochul for the Democratic nomination: Suozzi stumped for Brown during his successful write-in campaign for re-election last year after he lost the primary to self-described socialist India Walton while Hochul remained neutral.

OREGON 4TH CD. Retiring Rep. Peter DeFazio endorsed state Labor Commissioner Val Hoyle on Thursday in the race to succeed him in Oregon’s 4th Congressional District. Hoyle is the most prominent candidate seeking the Democratic nomination, though Airbnb executive Andrew Kalloch is also running. For Republicans, Army National Guard veteran Alek Skarlatos, who was the party’s nominee against DeFazio in 2020, is trying again.

Playbook: “With the Democratic Party on course for a devastating midterm election and party elder statesmen stepping in to help, people close to Bill and Hillary Clinton said the former first couple sees it as an opportunity to insert themselves back into political life.”

“The intra-party divisions have given them a chance to flex their centrist, dealmaking brand of politics as a way to move the party forward.”

“Another factor that motivated Bill Clinton to get more engaged: the low ratings and muted public reaction to Impeachment: American Crime Story, the FX show produced by Monica Lewinsky.”

MICHIGAN GOVERNOR. Former Detroit Police chief James Craig has released an internal poll from the GOP firm ARW Strategies showing him tied at 46% with Democratic Gov. Gretchen Whitmer. The last James survey was a September poll from Strategic National that had Whitmer ahead 47-46, but he’s since parted ways with that firm. A recent independent poll from the Glengariff Group, however, had Whitmer leading 49-39.

But, this district and all other newly drawn Ohio congressional district have been thrown out as unconstitutional. So stay tuned.

TEXAS 8TH CD. A group called Keep Texas Great PAC has spent $100,000 so far to boost Christian Collins, a former campaign manager to retiring Rep. Kevin Brady, in the March 1 Republican primary for this safely red seat. The PAC previously appeared on the scene when it sought to boost Midland City Councilman J. Ross Lacy in the 2020 primary for the old 11th District, but he ended up taking just 4% against the eventual winner, August Pfluger.

ILLINOIS 17TH CD. Rockford Alderwoman Linda McNeely has joined the busy Democratic primary for Illinois’ open 17th District, which Democrats redrew last year to become bluer. Under the old lines, the district voted 50-48 for Donald Trump, but the revised version would have gone for Joe Biden 53-45.

NEW JERSEY 6TH CD. Monmouth County Commissioner Sue Kiley, who’d been considering a challenge to Democratic Rep. Frank Pallone, has now filed paperwork with the FEC ahead of a possible bid for the GOP nomination. The boundaries of New Jersey’s 6th Congressional District didn’t change much in redistricting, but it did become slightly bluer: Under the old lines, it voted for Joe Biden 57-42, but the new version would have gone for Biden 59-40.

MICHIGAN 13TH CD. MLive.com mentions a few more Democrats as possible contenders for this safely blue Detroit-based seat, though there’s no word on any of their interest:

The filing deadline is in mid-April for the August primary.

VIRGINIA 1ST CD. Marine veteran Stewart Navarre announced Friday that he was dropping his campaign for the Democratic nomination to face Republican Rep. Rob Wittman because redistricting had moved him to the 7th District; Navarre also made it clear that he would be backing Democratic Rep. Abigail Spanberger in the 7th. Donald Trump’s margin of victory in the new 1st ticked up from 51-47 to 52-46.

FLORIDA 28TH CD. Both Politico and the National Journal report that former Republican Rep. Dennis Ross would mull a comeback if the new GOP-drawn map creates a new seat in central Florida, though the former item adds that Ross wouldn’t take on a Republican incumbent. Ross unexpectedly announced in 2018 that he would retire from the current 15th District even though he almost certainly would have won a fifth term in that red seat.

MICHIGAN 12TH CD. State Rep. Kyra Harris Bolden did not rule out running to succeed her fellow Democrat, retiring Rep. Brenda Lawrence, in an interview with MILive.com, saying she’s leaving “every opportunity on the table.” Democratic Rep. Rashida Tlaib, who represents the current 13th District, is campaigning for the new and very blue 12th District in the Detroit area.

MARYLAND GOVERNOR. Businesswoman Laura Neuman has entered the Democratic primary for Maryland’s open governorship, joining a crowded field that includes several heavyweight candidates. Neuman briefly served as Anne Arundel County executive as a Republican, following an appointment to the post to fill a vacancy in 2013, but lost the GOP primary for a full term the following year. At some point, she joined the Democratic Party, though it’s not clear exactly when.

MINNESOTA GOVERNOR. Healthcare executive Kendall Qualls announced he’d run for governor over the weekend, joining several other Republicans who are looking to unseat Democratic Gov. Tim Walz this fall as he seeks a second term. Qualls ran against Democratic Rep. Dean Phillips in Minnesota’s 3rd Congressional District in 2020 but lost 56-44. He says that if he does not receive the GOP’s endorsement at the party’s convention later this year, he won’t run in the primary—a pledge many candidates make that’s known in local parlance as “abiding.”

OREGON GOVERNOR. State House Speaker Tina Kotek said Thursday that she will resign from the legislature, effective Jan. 21, in order to focus on her campaign for the Democratic nomination for governor. Kotek made her declaration one day after longtime Senate President Peter Courtney, who has been an obstacle to progressive reforms during his almost two decades in charge, announced that he was retiring from the upper chamber.

ILLINOIS 1ST CD. On Thursday, retiring Rep. Bobby Rush gave his endorsement to Karin Norington-Reaves, who recently stepped down as head of the Chicago Cook Workforce Partnership and launched a campaign for Rush’s seat earlier this week. Norington-Reaves is one of several Democrats running for the open 1st Congressional District, and more may join the race.

MINNESOTA GOVERNOR. Sportscaster Michele Tafoya, who’d been mentioned as a possible GOP candidate for governor, has instead backed health care executive Kendall Qualls in the primary.

CALIFORNIA 37TH CD. Democratic state Sen. Sydney Kamlager kicked off her bid for California’s open 37th Congressional District on Thursday with an endorsement from current Rep. Karen Bass, who is running for mayor of Los Angeles. Kamlager also received the backing of Rep. Ted Lieu, who represents a neighboring seat.

WEST VIRGINIA 2ND CD. In response to a poll released by his rival in May’s GOP primary, Rep. David McKinley has surfaced a mid-December internal from Meeting Street Insights that finds him leading fellow Rep. Alex Mooney 40-34. By contrast, Mooney’s survey, conducted in early January by Public Opinion Strategies, had him up 45-32.

PENNSYLVANIA 8TH CD and LT. GOVERNOR. Businessman Teddy Daniels, who’d been seeking the GOP nomination to take on Democratic Rep. Matt Cartwright, has dropped his bid and will instead run for lieutenant governor.