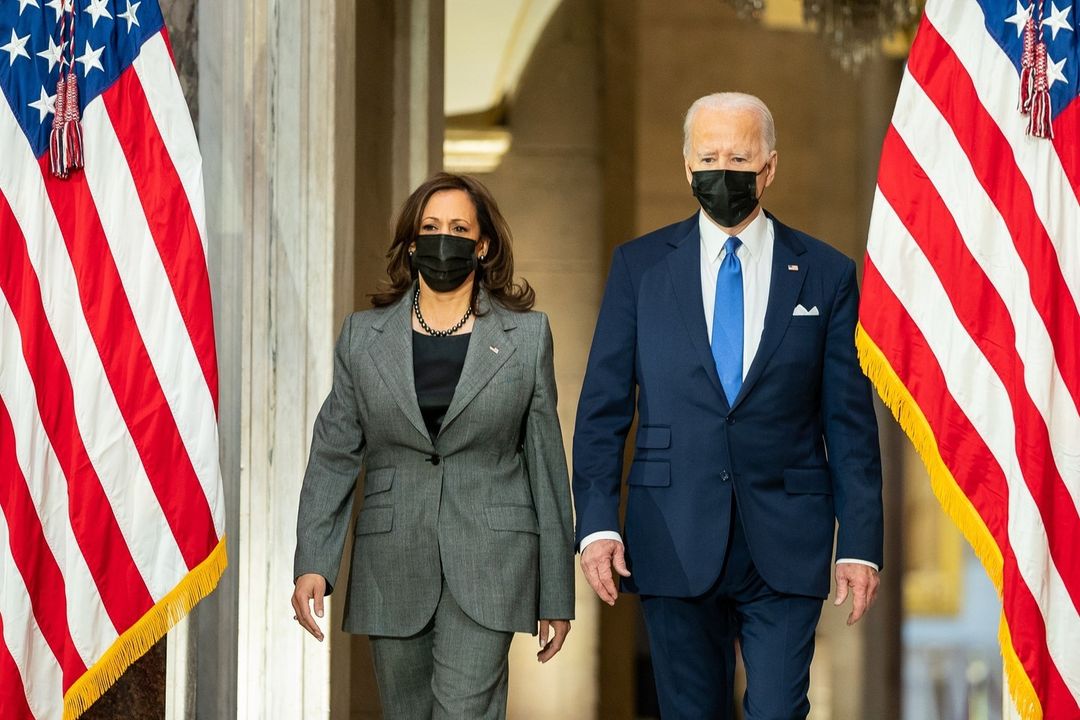 A new Quinnipiac poll finds Americans are split on which party in Congress is more likely to protect their right to vote with 45% saying the Democratic Party, 43% saying the Republican Party and 12% not offering an opinion.

“The second is that the Democrats are not very overextended, at least based on the 2020 presidential results. Democrats only won 7 seats that Donald Trump carried for president; compare that to 2008, when Democrats won 49 seats that John McCain carried. Part of what happened in both 1994 and 2010 was conservative districts that voted Republican for president realigning their down-ballot voting from Democratic to Republican.”

“The Ohio Supreme Court struck down the state’s congressional district map Friday, saying Republicans violated the Ohio Constitution by drawing districts that favored GOP candidates,” the Columbus Dispatch reports. “Ohio Supreme Court Chief Justice Maureen O’Connor was, once again, a key vote in the 4-3 decision to reject the map, which could have given Republicans as much as a 12-3 advantage in a state that voted for President Barack Obama and President Donald Trump, twice.”

“The Ohio Supreme Court [had previously] struck down GOP-drawn state House and Senate maps as unconstitutional gerrymandering in a 4-3 decision Wednesday, sending the Ohio Redistricting Commission back to the drawing board,” the Columbus Dispatch reports. “Ohio Supreme Court Chief Justice Maureen O’Connor was the key vote, breaking with her party to rule against the maps.”

“The Republican National Committee is preparing to change its rules to require presidential candidates seeking the party’s nomination to sign a pledge to not participate in any debates sponsored by the Commission on Presidential Debates,” the New York Times reports.

We didn’t have general election debates between 1964 and 1972, but they’ve existed in some form continuously since 1976.

Said Romney: “Well, that would be nuts. The American people want to see candidates for president debating issues of consequence to them, and it provides a service to the country and to the people, to hear the prospective candidates of the two major parties duke it out.”

RHODE ISLAND GOVERNOR. Cranston Mayor Kenneth Hopkins said Tuesday that he’s “forming an exploratory committee [to] possibly run for governor.” Hopkins, who was first elected to his post in 2020, would be the most prominent Republican to enter the race to date should he decide to get in.

MINNESOTA 3RD CD. Businessman Mark Blaxill, a former treasurer for the state GOP, announced a bid for Minnesota’s 3rd Congressional District against Democratic Rep. Dean Phillips on Tuesday morning. He joins Navy veteran Tom Weiler in the Republican primary. Redistricting has yet to take place but will likely be handled by the courts due to a deadlock between the Republican-run state Senate and the Democratic-held state House.

MARYLAND U.S. SENATOR. Republican Gov. Larry Hogan once again declined to rule out a bid against Democratic Sen. Chris Van Hollen on Wednesday one day after the Associated Press detailed national Republicans’ ongoing efforts to convince him to run. Hogan downplayed his interest when asked but didn’t do anything to take his name out of contention, saying, “I don’t have much desire to be in the US Senate.” The filing deadline is Feb. 22.

OHIO U.S. SENATOR. The radical anti-tax Club for Growth has launched what NBC’s Henry Gomez reports is a $750,000 TV and digital buy attacking former state Republican Party chair Jane Timken ahead of the May primary. The Club, which backs ex-state Treasurer Josh Mandel, had been training its fire on venture capitalist J.D. Vance, but it recently released a poll finding that Timken is now Mandel’s main threat.

The narrator declares, “Timken claimed she didn’t know how she would have voted on Trump’s impeachment while passionately defending her RINO congressman after he voted to impeach Trump.” That last bit is a reference to retiring Rep. Anthony Gonzalez, who was one of the 10 House Republicans who voted to impeach Donald Trump last year. Timken initially said that the congressman had a “rational reason why he voted that way. I think he’s an effective legislator, and he’s a very good person.” While she soon backtracked and called for Gonzalez’s resignation, she didn’t do it fast enough to insulate her from attacks like this one.

VERMONT U.S. SENATOR. Former U.S. Attorney Christina Nolan last week filed paperwork with the FEC for a potential run for the Republican nod, and she now tells VTDigger, “I am definitely exploring the possibility, but I am not yet ready to announce a formal decision or make a formal announcement.”

The last time Green Mountain Republicans won a federal election was 2000, when moderate Sen. Jim Jeffords easily secured another term; Jeffords famously abandoned the GOP (and his all-Republican barbershop quartet, the Singing Senators) the following year to caucus with the Democrats as an independent, a move that handed Team Blue control of the upper chamber.

CALIFORNIA 37TH CD. Former Los Angeles City Councilwoman Jan Perry has filed FEC paperwork for a potential campaign to succeed Rep. Karen Bass, a fellow Democrat who is leaving to run for mayor of L.A., in the June top-two primary for this safely blue seat. Perry would be the first member of Congress who is both Black and Jewish.

Perry ran for the city’s top job in 2013 and ultimately placed fourth in the nonpartisan primary with 16%. She went on to endorse Eric Garcetti in the second round, who named her head of his administration’s Economic Development Department following his victory. Perry stepped down in 2018 and ran for a seat on the Los Angeles County Board of Supervisors two years later, but she took a distant third with just 12%.

The only notable Democrat who has announced a campaign for the 37th District, which includes Central Los Angeles, is Culver City Vice Mayor Daniel Lee. State Sen. Sydney Kamlager, who decisively won her current post last year by beating Lee in a special election, also filed FEC paperwork in late November, but she still hasn’t said if she’s running.

FLORIDA 7TH CD. Businessman Scott Sturgill, who lost the 2018 Republican primary for the old version of this seat, has announced a bid to succeed retiring Democratic Rep. Stephanie Murphy in a state where redistricting is still underway. Sturgill self-funded $150,000 for his last campaign but still lost the primary 54-30 to state Rep. Mike Miller, whom Murphy beat months later.

The new congresswoman, though, will likely need to prepare for another serious nomination fight. Holness, who never conceded defeat, filed paperwork for another bid last month, and The Sun Sentinel reported at the time that he planned to seek a rematch. Former Broward County Commissioner Barbara Sharief, who earned third place, also told the paper for that article that she was “more than likely” to run again but was “waiting to see what the districts look like.”