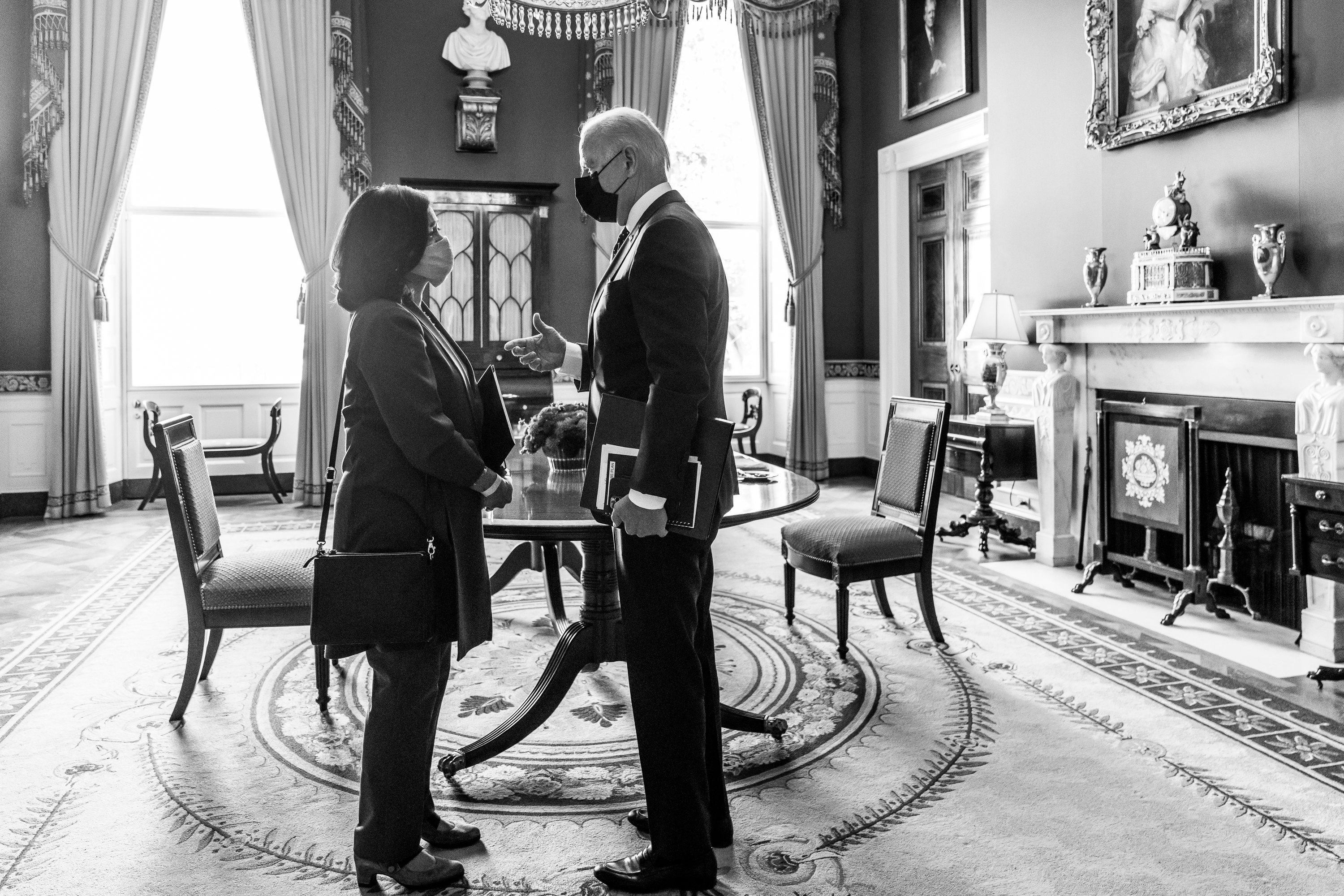 “Aides familiar with Mr. McConnell’s thinking say the threat is intended to cause heartburn for Democrats as Senate Majority Leader Chuck Schumer (D-NY) tries to unify his caucus ahead of possible votes to amend or abolish the filibuster’s 60-vote threshold in the next week.”

Said McConnell: “Since Sen. Schumer is hellbent on trying to break the Senate, Republicans will show how this reckless action would have immediate consequences.”

Washington Post: Where Democratic senators stand on changing or eliminating the filibuster.

“Sen. Joe Manchin (D-WV) doubled down Tuesday on his support for the filibuster as President Biden heads to Georgia to publicly push for changes to the Senate rule in order to pass voting rights legislation,” The Hill reports.

Said Manchin: “We need some good rules changes to make the place work better. But getting rid of the filibuster doesn’t make it work better.”

“McCarthy told us his planning on this front is in its early stages, and he hasn’t yet decided on what kind of limitations there may be on stock trades or holdings. One idea would be to force lawmakers to hold only professionally managed mutual funds. Another proposal the GOP leadership is considering would bar lawmakers from holding stocks in companies or industries their committees oversee. Other members have advocated for mandatory blind trusts for lawmakers’ holdings.”

“Jerome Powell, the Federal Reserve chair whom President Biden has nominated for a second four-year term, is set to tell senators on Tuesday that central bankers will use their economic tools to keep inflation — which has been high — from becoming entrenched,” the New York Times reports.

“Mr. Powell, who is scheduled to testify before the Senate Banking Committee as he seeks confirmation, faces reappointment at an anxious economic moment. Inflation is running at the fastest pace in nearly 40 years. While economists have hoped for months that it would soon fade, that has yet to happen. Higher prices are chipping away at household incomes, even as wages rise and as companies hire at a solid clip.”

Richard Clarida, the second highest official at the Federal Reserve, will resign early after new details of his trading activity early in the pandemic were revealed, Axios reports.

“The number of Russian troops at Ukraine’s border has remained steady in recent weeks, despite U.S. intelligence predictions of a surge, but American officials say that President Vladimir V. Putin has begun taking steps to move military helicopters into place, a possible sign that planning for an attack continues,” the New York Times reports.

“As the House select committee investigating the Jan. 6 assault on the Capitol rushes to gather evidence and conduct interviews, how far it will be able to go in holding former President Donald Trump accountable increasingly appears to hinge on one possible witness: former Vice President Mike Pence,” the New York Times reports.

“Since the committee was formed last summer, Mr. Pence’s lawyer and the panel have been talking informally about whether he would be willing to speak to investigators… But as Mr. Pence began sorting through a complex calculation about his cooperation, he indicated to the committee that he was undecided.”

“Kazakhstan’s President Kassym-Jomart Tokayev has described deadly violence last week as an attempted coup d’etat,” the BBC reports.  “He told leaders of a military alliance of ex-Soviet states the action had been co-ordinated by a ‘single center,’ but did not name those responsible.”

“The number of Americans hospitalized with Covid-19 has surpassed last winter’s peak, underscoring the severity of the threat the virus continues to pose as the extremely contagious Omicron variant tears through the United States,” the New York Times reports.

Washington Post: “But the highly transmissible omicron variant threatens to obliterate that benchmark. If models of omicron’s spread prove accurate — even the researchers who produce them admit forecasts are difficult during a pandemic — current numbers may seem small in just a few weeks.”

“Disease modelers are predicting total hospitalizations in the 275,000 to 300,000 range when the peak is reached, probably later this month.”

“The CDC is considering updating its mask guidance to recommend that people opt for the highly protective N95 or KN95 masks worn by health-care personnel, if they can do so consistently,“ the Washington Post reports.

“With the highly transmissible omicron variant spurring record levels of infections and hospitalizations, experts have repeatedly urged the Biden administration to recommend the better-quality masks rather than cloth coverings to protect against an airborne virus, and to underscore the importance of masking.”

On the first day of this year’s legislative session, 10% of Washington’s senators have announced they have Covid-19, the Seattle Times reports.

“Members of Congress, police officers and government watchdog groups argued in federal court on Monday that Donald Trump was liable for major financial damages for his role in inspiring the Jan. 6 attack on Congress, pressing an array of civil suits against the former president amid mounting frustration that he has faced no penalty for the riot,” the New York Times reports.

“Over nearly five hours in the United States District Court for Washington, lawyers laid out their cases against Mr. Trump, contending that he deserved to be held responsible for inflaming a violent mob, despite what are typically wide immunity protections for a president’s speech and actions while in office.”

Politico: Judge mulls whether Trump’s silence on Jan. 6 could amount to “agreement” with rioters.

“Gov. Ron DeSantis on Friday defended his administration’s decision to allow up to one million Covid-19 rapid test kits to expire, a move that comes as he is facing increasing criticism from Democrats over his handling of the Omicron surge,” Politico reports.

Indiana state Sen. Scott Baldwin (R), who is facing criticism for saying teachers must be impartial when discussing Nazism, walked back his remarks, the Indianapolis Star reports.

Alan Dershowitz lobbied Donald Trump to pre-emptively pardon Ghislaine Maxwell during the final days of his presidency after talks with her family, the Times of London reports.

“COVID mandates are wrong. Schools have no right to force you to get your 5-year old vaccinated.”  — Sen. Ted Cruz (R-TX), on Twitter, overlooking the current vaccine mandates for schools include: Chickenpox, Diphtheria, Hepatitis A & B, Flu, Measles, Mumps, Pertussis, Polio, Pneumococcal, Rotavirus, Rubella, and Tetanus.

“North Korea has fired a suspected ballistic missile, less than a week after it launched what it claimed was a hypersonic missile,” the BBC reports.

“A proposal for Chicago Public Schools to resume in-person classes Wednesday has been approved by the Chicago Teachers Union’s House of Delegates following a contentious weeklong standoff,” the Chicago Tribune reports.

New York Times: “The deal, which city officials said included provisions for additional testing and metrics that would close schools with major virus outbreaks, was approved by the union’s House of Delegates on Monday night and was expected to be voted on later in the week by rank-and-file teachers.”

Anti-vaccine leader Christopher Key told his followers they could cure Covid-19 by drinking their own urine, the Daily Beast reports.  Said Key, in a view over the weekend: “The antidote that we have seen now, and we have tons and tons of research, is urine therapy. OK, and I know to a lot of you this sounds crazy, but guys, God’s given us everything we need.”

Said Paladino: “It’s just nobody’s business whether I am or not. See, it’s called medical freedom. I don’t need to show you my papers. This is not Nazi Germany.”

Iowa Senate President Jake Chapman (R) opened the legislative session Monday with an attack on the media and claims of a “sinister agenda” to normalize deviant behavior against children, the Des Moines Register reports.

Said Chapman: “It has become increasingly evident that we live in a world in which many, including our media, wish to confuse, misguide and deceive us, calling good evil and evil good.”

He added: “The attack on our children is no longer hidden. Those who wish to normalize sexually deviant behavior against our children, including pedophilia and incest, are pushing this movement more than ever before.”