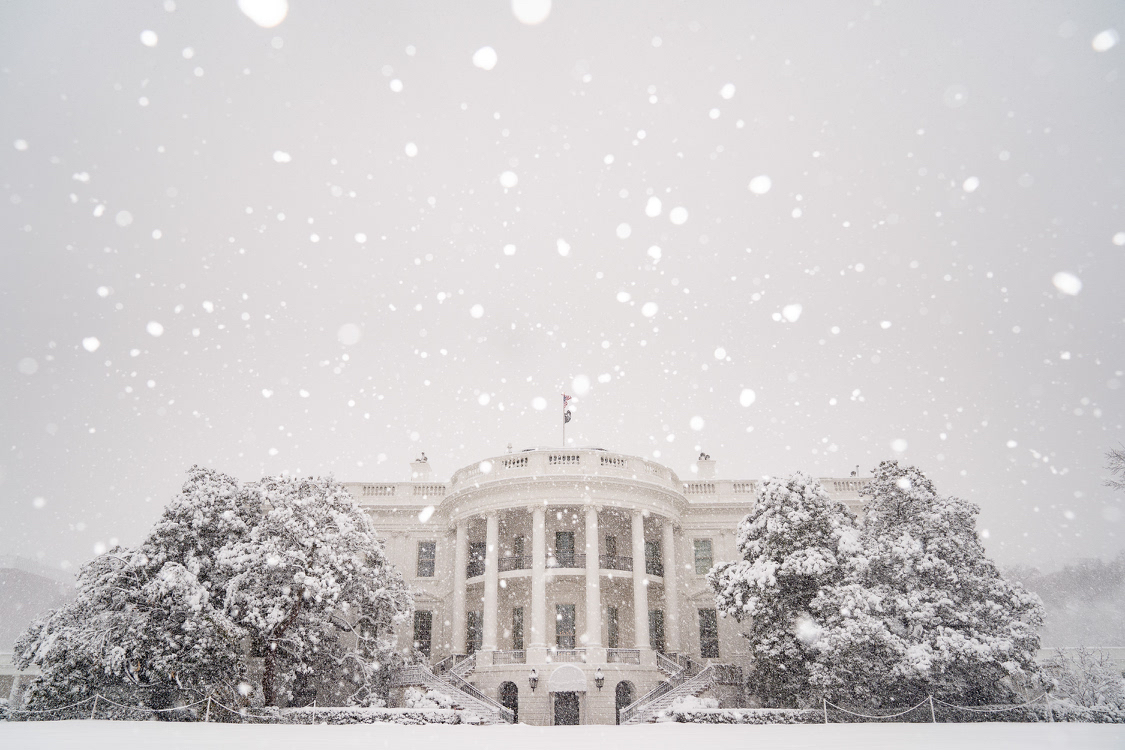 “U.S. greenhouse gas emissions roared back in 2021, the latest indicator that the country remains far off track from meeting President Biden’s ambitious climate change targets for the end of this decade,” the Washington Post reports.

“A 17 percent surge in coal-fired electricity helped drive an overall increase of 6.2 percent in greenhouse gas emissions compared with the previous year… While emissions remained below pre-pandemic levels, it marked the first annual increase in reliance on the nation’s dirtiest fossil fuel since 2014.”

Democrats tell Axios that negotiating with Sen. Joe Manchin (D-WV) is “like negotiating via Etch A Sketch.”  Said one: “You think you’re just about there. You think you’ve got an agreement on most of the things and it’s settling in. And then you come back the next morning and you’re starting from scratch.”

“About four weeks later, the West Virginia Democrat has made clear that he does not currently support advancing even that offer following a breakdown in negotiations between Manchin and the White House right before Christmas.”

“Senior Democrats say they do not believe Manchin would support his offer even if the White House tried adopting it in full — at least not at the moment — following the fallout in mid-December.”

Sen. Bernie Sanders (I-VT) seemingly slams the Democratic leadership in an interview with The Guardian.

Said Sanders: “We have tried a strategy over the last several months, which has been mostly backdoor negotiations with a handful of senators. It hasn’t succeeded on Build Back Better or on voting rights. It has demoralized millions of Americans.”

Rolling Stone: “At this point in human evolution, burning coal for power is one of the stupidest things humans do. Coal plants are engines of destruction, not progress. Thanks to the rapid evolution of clean energy, there are many better, cheaper, cleaner ways to power our lives. The only reason anyone still burns coal today is because of the enormous political power and inertia that the industry has acquired since the 19th century.”

“In America, that power and inertia is embodied in the cruel and cartoonish character of West Virginia Sen. Joe Manchin, who, paradoxically, may have more control over the trajectory of the climate crisis than any other person on the planet right now.”

“The prosecutor weighing whether Donald Trump and others committed crimes by trying to pressure Georgia officials to overturn Joe Biden’s presidential election victory said a decision on whether to bring charges could come as early as the first half of this year,” the AP reports.

“A federal judge in Washington, DC, is set to consider, for the first time, whether former President Donald Trump is immune from liability related to his supporters attacking the US Capitol on January 6, 2021,” CNN reports.   “The major hearing on Monday is part of a trio of insurrection-related lawsuits seeking to hold Trump and others accountable at a time when the House select committee probing January 6 has aggressively investigated the political leaders who inspired the attack, and as the Justice Department is prosecuting more than 700 rioters for criminal offenses.”

“Senate Democrats are expected to force another vote on elections and voting rights legislation as soon as this week, despite not having enough votes to pass the measure. If Republicans block the bill — which is expected — Senate Majority Leader Chuck Schumer (D-NY) has repeatedly vowed to launch an effort to change the Senate’s filibuster rules by Martin Luther King Jr. Day on Jan. 17,” Politico reports.

“Schumer’s message will get a boost Tuesday as President Joe Biden, a proud ‘Senate Guy,’ heads to Georgia for a speech and events related to voting rights and the filibuster.”

Big caveat: “There is not consensus within the 50-vote Democratic caucus on changing the filibuster and Democrats haven’t unveiled a proposal for how they plan to change Senate rules, despite Schumer’s promises to take the issue to the floor.”

Rep. Jim Jordan (R-OH), a close confidante of former President Donald Trump, said he would not cooperate with a House committee investigating last year’s attack on the Capitol, Reuters reports.

Politico: “Jordan was among the House Republicans who worked most closely with Trump in the run-up to the Jan. 6 session of Congress meant to finalize the 2020 presidential election results. He also has acknowledged speaking with Trump at least once after rioters had overtaken the Capitol.

So much for Jordan saying he has “nothing to hide.“

“Russian and American officials met for a preliminary dinner on Sunday night to begin a high-stakes negotiation over threats to Ukraine and a widening gulf between Moscow and the West, but there was deep pessimism on both sides that a diplomatic solution was within reach,” the New York Times reports.

Financial Times: “Nato has warned Moscow to abandon its belligerent foreign policy and co-operate with the west or face a military alliance steeled for conflict on the eve of a week of intense diplomacy aimed at averting a Russian assault on Ukraine.”

NATO’s secretary-general has ruled out creating “second-class” members of the military alliance to appease Moscow, ahead of a week of high-stakes diplomacy between the Kremlin and western powers that aims to avoid a feared Russian invasion of Ukraine, the Financial Times reports.

“With Russian troops massing along Ukraine’s borders, American and Russian diplomats made clear after an intense round of negotiations on Monday that while the two sides would keep talking, they remain far from agreement on meeting each other’s security concerns,” the New York Times reports.

“Russian officials said they told their American counterparts they had no plans to invade Ukraine, in a series of talks that lasted nearly eight hours.”

“A series of messaging missteps is threatening the credibility of federal health agencies, and critics say the White House isn’t doing enough to manage the fallout,” Axios reports.

“While much of the unvaccinated population is unlikely to be persuaded by any messenger, large swaths of the public are still receptive to expert guidance, but federal health agencies, particularly the CDC, may be squandering their credibility with this population.”

Washington Post: “The latest surge in coronavirus cases prompting school and day-care closures has thrust parents back into familiar terrain, trying to navigate work obligations with a changing patchwork of testing protocols, quarantines and a possible return to virtual schooling.”

“At least 5,225 schools were disrupted for at least part of this past week because of the pandemic, easily a record for the current school year.”

New York Times: “For Democrats, who promised to keep schools open, the tensions are a distinctly unwelcome development.”

“Starting Saturday, private health insurers will be required to cover up to eight home COVID-19 tests per month for people on their plans,” the AP reports.

“The Biden administration announced the change Monday as it looks to lower costs and make testing for the virus more convenient amid rising frustrations.”

“Escalating demand for Covid-19 tests is prompting some laboratories to ration access, giving priority to people with symptoms or other health concerns as the Omicron variant quickly spreads,” the Wall Street Journal reports.

House Minority Leader Kevin McCarthy (R-CA) told Breitbart that if he becomes Speaker, he will move to strip Reps. Adam Schiff (D-CA) and Eric Swalwell (D-CA) from their posts on the House Intelligence Committee, and remove Rep. Ilhan Omar (D-MN) from her spot on the House Foreign Affairs Committee.

Just Security: “The plea agreement Manafort entered into with the government allowed him to write anything he wanted, but provided that he could not profit from any such writings — a provision that the government uses when defendants in high-profile matters might seek to profit from their crimes.”

“One legal issue is whether the presidential pardon Manafort received voids this provision in the plea agreement. The answer to that question is surely no.”

Manafort’s book comes out in August.

“After Haiti’s president was assassinated and the country slid into turmoil, Ariel Henry became head of the government, responsible for bringing the killers to justice and helping the country heal,” the New York Times reports.

“But new evidence suggests that Mr. Henry maintained communications with a prime suspect in the case — and that the two stayed in close contact even after the murder.”

“Treasury Department officials on Monday said that the Internal Revenue Service will face ‘enormous challenges’ during this year’s tax filing season, warning of delays to refunds and other taxpayer services,” the Washington Post reports.

“The IRS closed last filing season with more than 35 million unprocessed returns — a fourfold increase from the last year before the pandemic. As the backlog increased, the IRS also failed to respond to the enormous increase in calls for assistance.”

There were fewer than 15,000 IRS employees available to handle more than 240 million calls in the first half of last year — one person for every 16,000 calls.