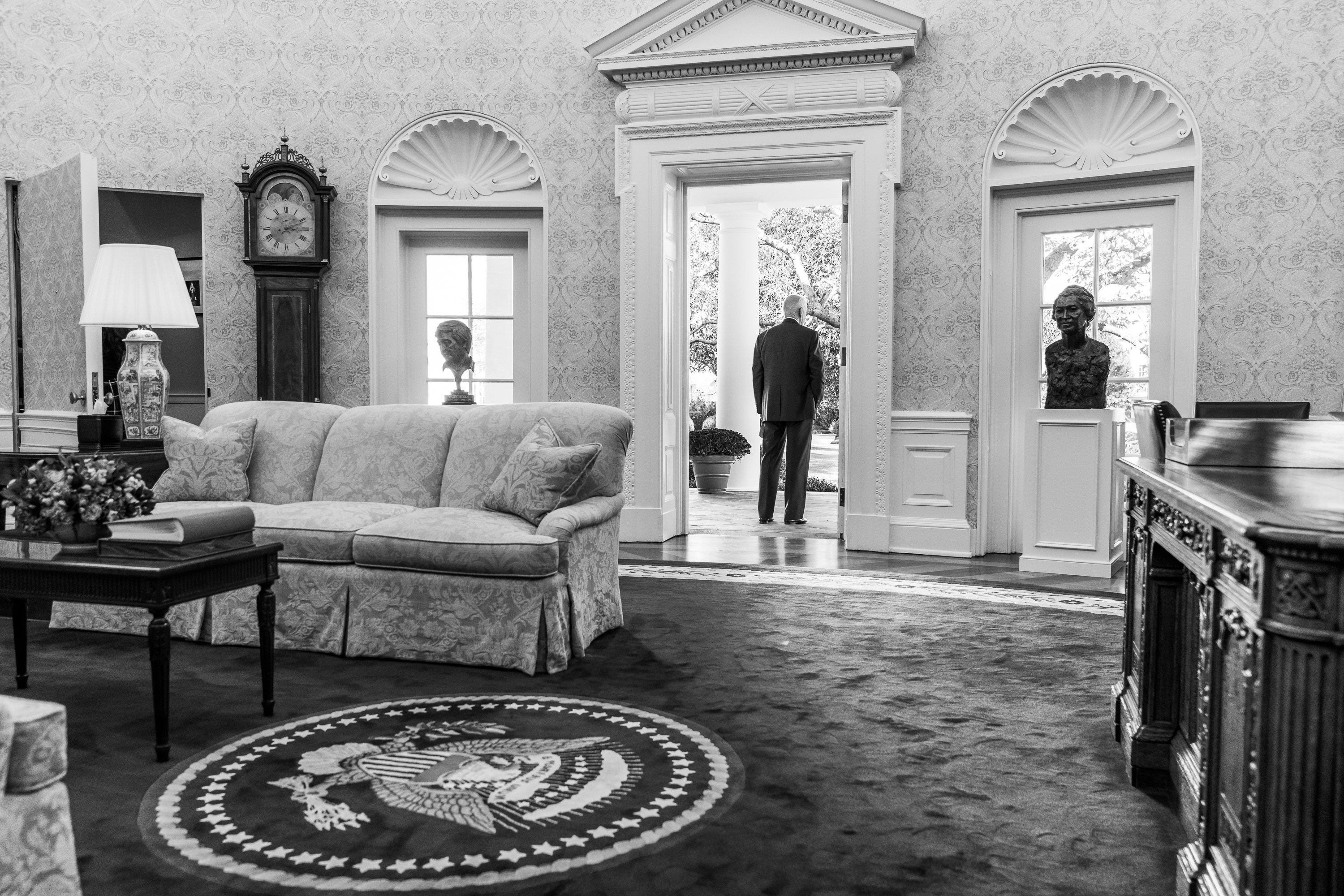 “President Biden has begun his second year in office by lashing out at Republicans, embracing forceful new attacks meant to define a choice for voters between Mr. Biden’s Democrats and a Republican Party still under the thumb of former President Donald Trump,” the New York Times reports.

“The sharp tone comes as Mr. Biden seeks to jump-start his agenda, which has largely stalled in Congress. And with midterm elections looming at the end of the year, the president faces a challenge that he has largely avoided so far: drawing Mr. Trump and other Republican leaders into a more direct clash of ideas.”

Raskin said she also “identified some lines of inquiry that had never occurred to me.”

He added: “America is going to be shocked and surprised at what we all come to learn this year.”

“I think the one thing that if I could wave a magic wand and have more information on, it would certainly be what did the president know about January 6 leading up to January 6. And I think what’s important is — it’s the difference between was the president absolutely incompetent or a coward on the sixth when he didn’t do anything, or did he know what was coming? And I think that’s a difference between incompetence with your oath and possibly criminal.“

— Rep. Adam Kinzinger (R-IL), in an interview on NBC News.

“The Taliban have arrested a Kabul university professor who gained national fame for berating a senior official on live television, a sign of the intensifying crackdown on critics of Afghanistan’s new regime,” the Wall Street Journal reports.

“With the fate of Ukraine and potentially broader post-Cold War European stability at stake, the United States and Russia are holding critical strategic talks that could shape the future of not only their relationship but the relationship between the U.S. and its NATO allies. Prospects are bleak,” the AP reports.

“Though the immediacy of the threat of a Russian invasion of Ukraine will top the agenda in a series of high-level meetings that get underway on Monday, there is a litany of festering but largely unrelated disputes, ranging from arms control to cybercrime and diplomatic issues, for Washington and Moscow to overcome if tensions are to ease. And the recent deployment of Russian troops to Kazakhstan may cast a shadow over the entire exercise.”

“With much at risk and both warning of dire consequences of failure, the two sides have been positioning themselves for what will be a nearly unprecedented flurry of activity in Europe this week. Yet the wide divergence in their opening positions bodes ill for any type of speedy resolution, and levels of distrust appear higher than at any point since the collapse of the Soviet Union.”

“The Biden administration and its allies are assembling a punishing set of financial, technology and military sanctions against Russia that they say would go into effect within hours of an invasion of Ukraine, hoping to make clear to President Vladimir V. Putin the high cost he would pay if he sends troops across the border,” the New York Times reports.

“The plans the United States has discussed with allies in recent days include cutting off Russia’s largest financial institutions from global transactions, imposing an embargo on American-made or American-designed technology needed for defense-related and consumer industries, and arming insurgents in Ukraine who would conduct what would amount to a guerrilla war against a Russian military occupation, if it comes to that.”

Washington Post: “Trump’s staff, allies and even adversaries were long accustomed to playing to an ‘Audience of One’ — a commander in chief with a twitchy TiVo finger and obsessed with cable news.”

“But text messages — newly released by the House select committee investigating the Jan. 6 insurrection — between Fox News hosts and former Trump chief of staff Mark Meadows, crystallize with new specificity just how tightly Fox News and the White House were entwined during the Trump years, with many of the network’s top hosts serving as a Cable Cabinet of unofficial advisers.”

David Graham: “Electoral-count reform is a narrow fix, insufficient for the many problems in the voting system—but it’s better than nothing at all.”

Associated Press: “As Biden wraps up his first year in the White House, he has held fewer news conferences than any of his five immediate predecessors at the same point in their presidencies, and he has taken part in fewer media interviews than any of his recent predecessors.”

“Fresh off a high-profile speech in which he warned that a dagger had been placed at the throat of American democracy, President Joe Biden will travel to the state that White House officials view as ‘ground zero’ for Republican-led election suppression efforts,” Politico reports.

“Biden will speak in Georgia on Tuesday. In his remarks, he is expected to not only echo the themes of his address on the anniversary of the Jan. 6 insurrection but to expand on his endorsement of a filibuster carveout to pass voting rights legislation in the Senate.”

“I am, as you know, a Black person, descended of people who were given the vote by the 15th Amendment to the United States Constitution. The 15th amendment was not a bipartisan vote, it was a single party vote that gave Black people the right to vote. Manchin and others need to stop saying that because that gives me great pain for somebody to imply that the 15th Amendment of the United States Constitution is not legitimate because it did not have bipartisan buy-in.”

“A year into his term, only 41 percent of the president’s nominees for Senate-confirmed posts have been approved, a new analysis finds, the worst rate in decades,” the New York Times reports.

“Ambulances in Kansas speed toward hospitals then suddenly change direction because hospitals are full. Employee shortages in New York City cause delays in trash and subway services and diminish the ranks of firefighters and emergency workers. Airport officials shut down security checkpoints at the biggest terminal in Phoenix and schools across the nation struggle to find teachers for their classrooms,” the Associated Press reports.

“The current explosion of omicron-fueled coronavirus infections in the U.S. is causing a breakdown in basic functions and services — the latest illustration of how COVID-19 keeps upending life more than two years into the pandemic.”

“With infection rates mounting, the Omicron variant has ushered in a new and disorienting phase of the pandemic, leaving Americans frustrated and dismayed that the basic elements they thought they understood about the coronavirus are shifting faster than ever,” the New York Times reports.

Kansas City Star: “We asked weight loss experts, and people who have lost large amounts of weight themselves, whether it’s possible to lose 90 pounds in six months simply by eating better and hitting a humble home gym for half an hour five or six times a week.”

“Their response? Absolutely not, almost certainly not, and hahaha.”

“That’s what Mike Pompeo, who represented Kansas in Congress before going on to become Donald Trump’s favorite cabinet member, told the New York Post that he did.”

“When Iowa’s 2022 legislative session commences Monday, there will be a notable absence on the floor of the state Senate: reporters,” the Washington Post reports.

“Republican leaders in the state Senate told journalists last week they will no longer be allowed to work on the chamber floor, a change that breaks with a more than 140-year tradition in the Iowa Capitol. The move raised concerns among free press and freedom of information advocates who said it is a blow to transparency and open government that makes it harder for the public to understand, let alone scrutinize, elected officials.”

“One year after the violent riot in the Capitol, roughly 52% of Americans said they had an unfavorable view of Mr. Trump compared with 43% who viewed him favorably, according to a FiveThirtyEight.com average of national polls. That 9-point gap compared with a nearly 20-point spread in Mr. Trump’s favorability rating a year earlier.”