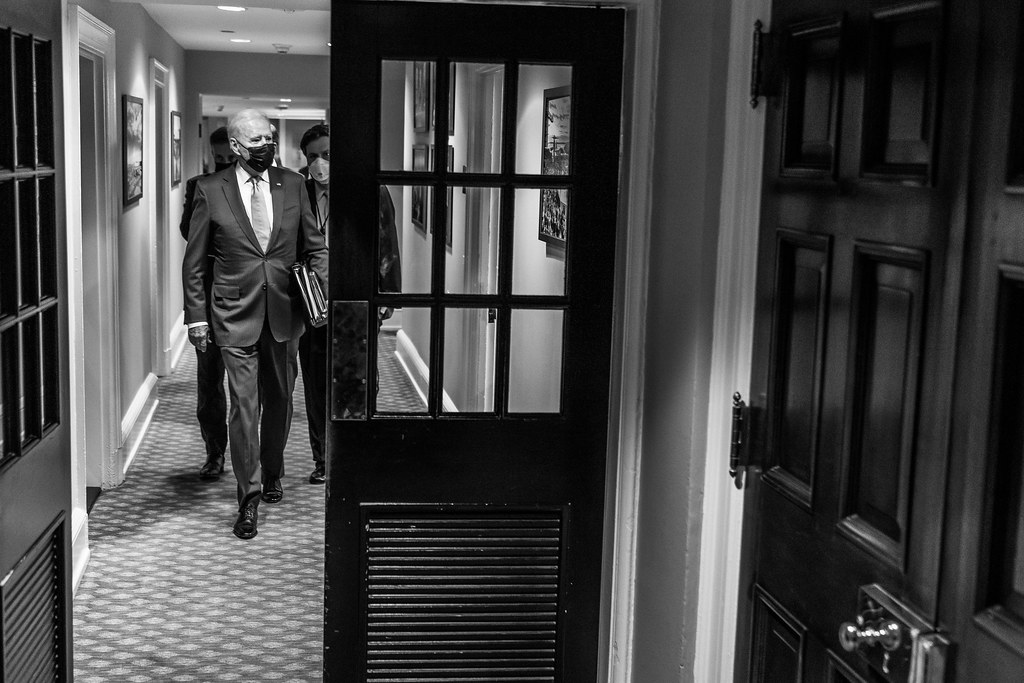 “The 2022 midterms will be a referendum on the current president, not the former one. This is something on which Democratic and Republican strategists I’ve spoken with agree. At the same time, Republicans from swing states or districts who spend their time trying to re-litigate the 2020 election or defend those who attacked the Capitol are putting themselves in political peril.”

“A judge said Thursday he will fine Cyber Ninjas, the contractor that led Arizona Republicans’ 2020 election review, $50,000 a day if the firm doesn’t immediately turn over public records related to the unprecedented inquiry,” the AP reports.

Rick Hasen: “Those who believe the last election was stolen will be more likely to accept a stolen election for their side next time. They are more willing to see violence as a means of resolving election disputes. Political operatives are laying the groundwork for future election sabotage and the federal government has done precious little to minimize the risk.”

“Many people who are not dispirited by such findings are uninterested. Exhausted by four years of the Trump presidency and a lingering pandemic, some Americans appear to have responded to the risks to our democracy by simply tuning out the news and hoping that things will just work out politically by 2024.”

“We must not succumb to despair or indifference. It won’t be easy, but there is a path forward if we begin acting now, together, to shore up our fragile election ecosystem.”

OREGON GOVERNOR. “Nicholas Kristof, a former New York Times columnist who in October announced a Democratic campaign for Oregon governor, is ineligible to run for the office, the Oregon secretary of state has announced, upending the journalist-turned-politician’s nascent campaign,” the Washington Post reports.

ARIZONA U.S. SENATOR. “Sen. Mark Kelly raised nearly $9 million in the final three months of 2021, a figure that surpasses what he raised in the previous three months and positions the Arizona Democrat to be one of the best funded candidates in the 2022 midterms,” CNN reports.

“Kelly is seen as one of the most vulnerable Democrats in the United States Senate. Although he defeated former Republican Sen. Martha McSally in 2020 and President Joe Biden became the first Democratic presidential nominee to win Arizona since 1996, Republicans are buoyant that voters have soured on Democratic control and will punish the party at the ballot box in 2022.”

ILLINOIS GOVERNOR and U.S. SENATOR. A spokesperson for retiring Republican Rep. Adam Kinzinger confirmed on Wednesday that the congressman would not run for Senate or governor next year. Kinzinger announced last year that he would not seek re-election to the House after Democrats redrew Illinois’ congressional map and left him without a plausible district to run in.

MISSOURI U.S. SENATOR. While Kansas City Mayor Quinton Lucas had expressed interest last year in seeking the Democratic nomination for Senate, he said this week that he plans to instead run for re-election in 2023.

FLORIDA GOVERNOR. State Sen. Annette Taddeo has earned an endorsement from Miami-Dade County Mayor Daniella Levine Cava, who leads the most populous county in the state, in the August Democratic primary for governor.

IOWA GOVERNOR. Democratic state Rep. Ras Smith announced on Wednesday that he would end his campaign for governor, citing difficulties in fundraising, and said he was still considering whether to seek re-election. Smith’s departure leaves businesswoman Deidre DeJear, the Democrats’ 2018 nominee for secretary of state, as the party’s most prominent challenger to Republican Gov. Kim Reynolds.

MINNESOTA GOVERNOR. The local tipsheet Morning Take reports that healthcare executive Kendell Qualls is “expected to announce” his entry into the GOP primary in a matter of “days.”

THE SPECIAL ELECTION IN THE OLD CALIFORNIA 22ND CD. Republican Devin Nunes, who announced last month that he’d be leaving Congress to take a job running Donald Trump’s new social media company, made his resignation official last week. That allows Democratic Gov. Gavin Newsom to call a special election to fill the final months of Nunes’ term. Newsom has two weeks to schedule the election, which would take place 126 to 140 days later. He’s likely to set it for April 5, which would allow a probable runoff to be consolidated with the state’s regular June 7 primary.

One prominent candidate from each party has confirmed that they’ll run in the upcoming special election to succeed now-former Republican Rep. Devin Nunes even though, as we’ll explain, the winner would need to campaign for a completely different district if they want to stay in Congress.

On the Republican side, Fresno County Supervisor Nathan Magsig tells GV Wire he’s “full speed ahead” when it comes to the special, but he hasn’t made up his mind about whether—or where—he’d run for a full term. But Fresno City Councilman Garry Bredefeld, who acknowledged he was considering running to succeed Nunes a month ago before the new congressional lines were finalized, says he still has no update to provide. For the Democrats, 2020 nominee Phil Arballo confirmed he’s going forward with his campaign for the as-yet unscheduled special election but added that he’s “still weighing” his choices for November.

Nunes himself hit the eject button weeks before the state’s independent redistricting commission approved its final congressional map, which scattered his existing 22nd District among four new constituencies. According to new calculations from Daily Kos Elections, a 41% plurality of Nunes’ now-former constituents wound up in the new 21st District, where longtime Democratic Rep. Jim Costa is seeking re-election. That seat, according to Dave’s Redistricting App, would have favored Joe Biden by a wide 59-39 spread, though Costa notably struggled to hold similarly blue turf in both 2010 and 2014.

Another 38% of Nunes’ old seat, meanwhile, is going to the new 20th, a 61-36 Trump district where House Minority Leader Kevin McCarthy should have no trouble winning re-election. An additional 15% of Nunes’ former district will be in the new 5th, another safely red seat where Rep. Tom McClintock reportedly will be running. (See our CA-05, CA-03 item above.) Finally, the remaining 10% will be in the new 22nd District, a 55-42 Biden seat that Republican Rep. David Valadao will almost certainly be running in.

THE NEW CALIFORNIA 22ND CD. Former Democratic Assemblywoman Nicole Parra, who’d been challenging Republican Rep. David Valadao in the old 21st District, says she’s dropping her congressional campaign to run for state Senate instead. Valadao hasn’t yet announced his plans but he’s all but certain to seek re-election in the new 22nd, which would have voted for Joe Biden by a 55-42 margin.

CALIFORNIA 31ST CD. While Democratic Rep. Grace Napolitano, who will be 86 when the new Congress is sworn in, has long been the subject of retirement speculation, she seems to be preparing to run for a 13th term this year in the redrawn—but still safely blue—31st District. The incumbent, who represents the old 32nd District, hasn’t announced anything yet, but the California Target Book’s Rob Pyers notes that she’s filed candidacy paperwork with Los Angeles County.

CALIFORNA 48TH CD. Former Marine prosecutor Joseph Rocha, a Democrat who spent months running against Republican Rep. Darrell Issa in the old 50th District, announced Tuesday that he would instead campaign for a state Senate seat. The redrawn 48th District in San Diego County would have backed Donald Trump 55-43, a margin which is a bit larger than his 53-45 performance under the old lines.

ILLINOIS 1ST CD. Chicago Alderman Pat Dowell said Wednesday that she would seek this safely blue seat, which makes her the first major Democrat to enter the race since longtime incumbent Bobby Rush announced his retirement on Monday. Dowell, who dropped her campaign for secretary of state in order to campaign for Congress, will likely have company before long, though, as the Chicago Sun-Times reports that CEO Karin Norington-Reaves will launch her own bid on Saturday. Activist Ja’Mal Green also has expressed interest in running.

NEVADA 4TH CD. Freshman Assemblywoman Annie Black, who attended the Jan. 6 Trump rally that preceded the attack on the Capitol, declared this week that she was seeking the Republican nod to take on Democratic Rep. Steven Horsford. Black used her announcement to highlight the fact that fellow lawmakers censured her in a May party-line vote for refusing to comply with the chamber’s pandemic rules. Members at the time were allowed to take to the floor unmasked so long as they were vaccinated, but Black refused to disclose her vaccination status or wear a mask.

Black joins a June primary field that includes 2020 candidate Sam Peters and professional boxer Jessie Vargas. Chance Bonaventura, who works as an aide to Las Vegas Councilwoman Michele Fiore (who is herself waging a longshot bid for governor), has also filed to run, though he doesn’t appear to have made an announcement yet. The new Democratic-drawn map boosted Joe Biden’s margin of victory in this district, which includes the northern Las Vegas area and rural areas to the north, from 51-47 to 53-45.

OHIO 1ST CD. Cincinnati City Councilman Greg Landsman, who’d reportedly been recruited by both local and national Democrats, announced on Wednesday that he’d challenge Republican Rep. Steve Chabot in Ohio’s redrawn 1st Congressional District. Republicans egregiously gerrymandered the district by conjoining Cincinnati to conservative Warren County via a skeletal isthmus just one mile wide; at the same time, they selectively portioned off suburban chunks of blue-leaning Hamilton County (where Cincy is based) to two other deep red districts, instead of consolidating them with the city to form a single, compact district.

Under Ohio’s previous map, Cincinnati was split between two districts, but an amendment to the state constitution that voters passed in 2018 now requires that cities be kept whole—which is why Republicans carved up the surrounding county instead. The new rules did result in the 1st becoming slightly bluer despite the GOP’s best efforts: The revamped district would have voted for Joe Biden by a narrow 50-48 margin, according to Dave’s Redistricting App, compared to Donald Trump’s 51-48 score under the old lines.