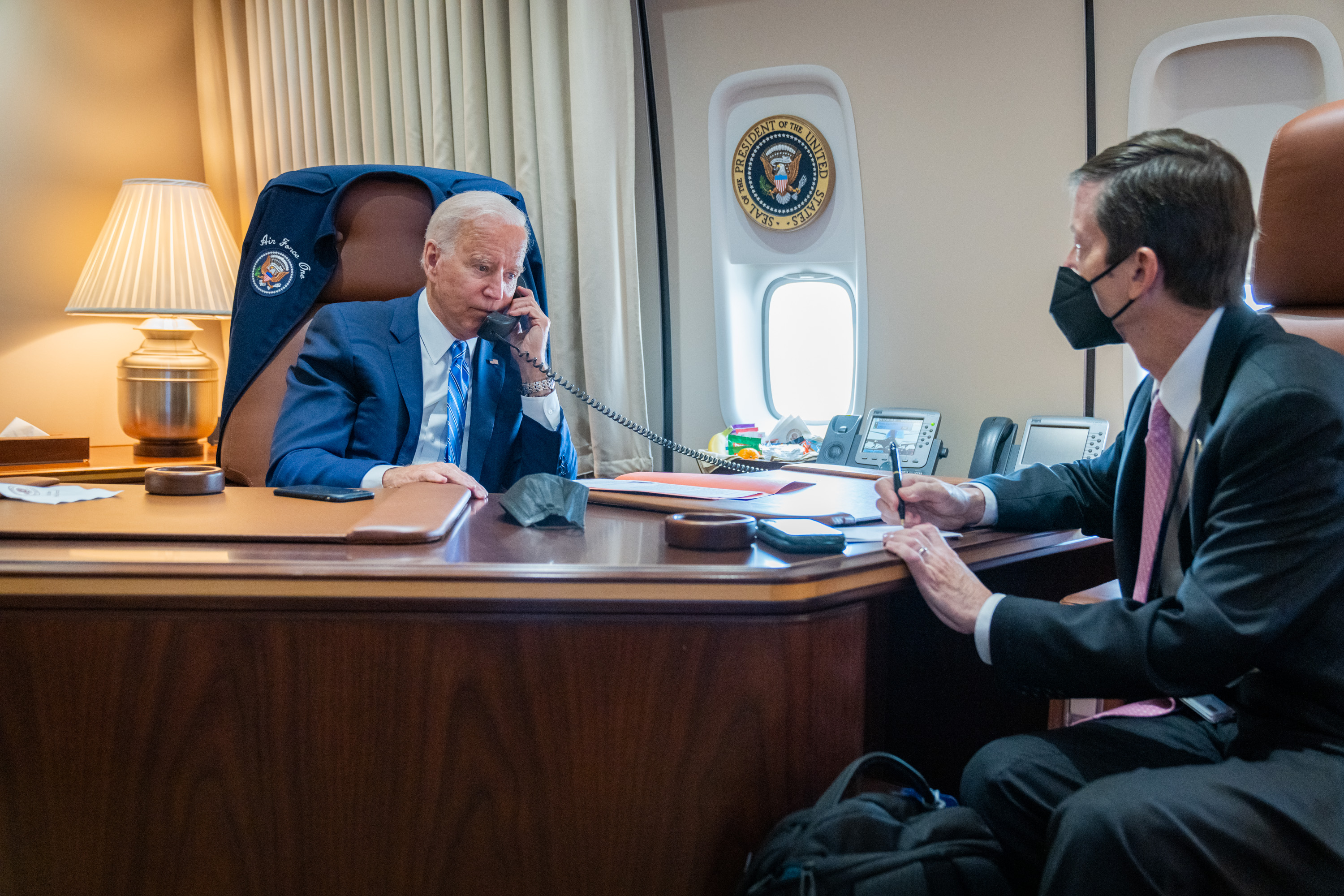 America’s faith in the integrity of the election system remains shaken by the events of Jan. 6, with only 20% of the public saying it’s very confident about the system, a new ABC/Ipsos poll finds.

This is a significant drop from 37% in an ABC News/Washington Post poll conducted in the days after the insurrection last year.

“A majority of Americans expect a repeat in the next few years of something like the deadly Jan. 6 attack on the U.S. Capitol — and just half say they now have faith in American democracy,” according to a new Axios-Momentive poll.

“After the January 6 assault on the U.S. Capitol, dozens of major corporations publicly pledged to pause their financial contributions to 147 Republican lawmakers who had voted to overturn the 2020 presidential election,” CBS News reports.

“A year later, most — but not all — of those companies have kept their word, according to an analysis of Federal Election Commission filings.”

MICHIGAN 12TH and 13TH CDs. Michigan Rep. Brenda Lawrence, who represents the current 14th District, announced Tuesday evening that she would retire after four terms, a move that quickly set off a round of musical chairs among fellow Detroit-area Democrats. Most prominently, Rep. Rashida Tlaib quickly declared that she would seek the safely blue 12th District, where Lawrence presumably would have campaigned had she sought re-election.

That decision in turn opens up the neighboring 13th District, another reliably blue constituency that contains Tlaib’s home but where she currently represents just about one-third of the residents. By contrast, 53% of the new 12th’s denizens live in Tlaib’s existing 13th District, so she’ll start out with a bigger geographic base of support there.

However, it’s far from guaranteed that Tlaib will have a clear path to victory in the August Democratic primary in the new 12th, which includes the west side of Detroit as well as Dearborn, Livonia, and other nearby communities. The Detroit News’ ​​Melissa Nann Burke mentions several local politicians as possible candidates, though none of them appear to have publicly expressed interest yet:

Over in the 13th, which includes most of Detroit, state Rep. Shri Thanedar announced a bid last week and has pledged to self-fund $5 million. Thanedar ran for governor in 2018 but placed a distant third in the primary with just 18% despite heavy spending, but he bounced back two years later by moving from Ann Arbor to Detroit to win a crowded nomination battle for the state House, again with a big assist from his own wallet.

Thanedar already has opposition, though. Detroit School Board member Sherry Gay-Dagnogo, who was termed out of the state House last year, quickly announced her own campaign, while Teach for America official Michael Griffie has also filed here. State Sen. Adam Hollier and state Rep. Abraham Aiyash each did not rule anything out in turn.

Jonathan Kinloch, who serves as party chair of the current 13th District, also relayed that state Sen. Marshall Bullock and former Detroit Police Chief Ralph Godbee are considering, while he and Burke mentioned several other names as possibilities:

Race could also be a factor in the contests for both seats, which are each home to large Black populations, especially since, as Lawrence noted in her retirement announcement, she’s currently Michigan’s only African American member of Congress. Indeed, Kinloch and two prospective candidates in the 13th, Hollier and Aiyash, all said it was vital for the state to have a Black representative. Among the declared candidates between the two districts, however, only Gay-Dagnogo is Black: Tlaib is the daughter of Palestinian immigrants while Thanedar is originally from India.

CALIFORNIA 42ND CD. Assemblyman Patrick O’Donnell, a Democrat who was mentioned as a candidate for this open seat, has instead announced that he won’t be running for any office this year.

COLORADO 8TH CD. Republican state Sen. John Cooke announced this week that he would back Thornton Mayor Jan Kulmann rather than run for this swingy new seat himself.

OREGON 4TH CD. Democratic state Rep. Marty Wilde, who had been considering a bid for Oregon’s open 4th Congressional District, said this week that he would not join the race. Airbnb policy executive Andrew Kalloch filed paperwork in mid-December for a bid to succeed his fellow Democrat, retiring Rep. Peter DeFazio, and Kalloch’s Twitter account now identifies him as a candidate. Meanwhile, state Sen. James Manning has confirmed an earlier report saying that he’d decided not to seek the Democratic nod.

ARIZONA 2ND CD. Democratic Rep. Tom O’Halleran has announced that he’ll seek re-election in the new 2nd District, a sprawling northern Arizona seat that is far redder than his existing 1st District. While O’Halleran’s current constituency favored Joe Biden by a narrow 50-48, the new 2nd, according to Dave’s Redistricting App, would have gone for Donald Trump by a 53-45 margin.

MICHIGAN 8TH and 7TH CD. Former Trump administration official Paul Junge, who lost to Democratic Rep. Elissa Slotkin 51-47 in Michigan’s old 8th District in 2020, announced on Tuesday that he’ll run for Congress in Michigan’s new 8th District—a race that, this time, will match him up against Democratic Rep. Dan Kildee, who represents the old 5th. Junge does not live in the district but said he would move there.

Like the old 5th, the Central Michigan-based 8th is anchored by the city of Flint, but it now also incorporates the entire “Tri-Cities” region of Saginaw, Bay City, and Midland. (Under the Republican-drawn gerrymander that was just superseded, Midland was in a neighboring district that extended jagged teeth to capture parts of the Saginaw area.) Politically, the new district is slightly more favorable to the GOP: The 5th went for Joe Biden 51-47 but the 8th would have backed the president by a slimmer 50-48 margin, according to Dave’s Redistricting App.

As for Slotkin, she’s seeking re-election in the revamped 7th, which is now a compact hub around the state capital of Lansing. Per DRA, it would have given Biden a narrow 50-49 win. Slotkin’s main opposition so far looks to be GOP state Sen. Tom Barrett, who recently announced that he’d switch over to the 7th as well.

MICHIGAN 13TH CD. State Rep. Shri Thanedar, who unsuccessfully sought the 2018 Democratic nomination for governor, announced last week that he would run in the new and safely blue 13th District and spend $5 million of his own money on his new effort. Rep. Rashida Tlaib, who is one of the most prominent Democrats in the House, lives in the new Detroit-based constituency but only currently represents about a third of it, and she has not yet announced her 2022 plans.

MICHIGAN 11TH CD. Two Democratic incumbents, Reps. Andy Levin and Haley Stevens, have each announced that they’ll run for the revamped 11th District, a suburban Detroit constituency that would have supported Joe Biden 58-40. About 45% of the new district’s residents live in Stevens’ existing 11th, while another 25% live in Levin’s current 9th District.

CALIFORNIA 45TH CD. Democratic businessman Jay Chen, who’d been running against Republican Rep. Young Kim in the old 39th District, has announced he’ll instead run for the redrawn 45th District. That will pit him against Republican Rep. Michelle Steel, who has said she’ll seek re-election in the Orange County-based 45th, which would have voted 52-46 for Joe Biden. Steel does not live in the 45th and currently represents just 16% of the new district.

CALIFORNIA 42ND CD. Candidates are already piling in for the open-seat race in California’s new 42nd District, a majority Latino slice of Los Angeles that would have voted 72-25 for Joe Biden. The two biggest names so far belong to Assemblywoman Cristina Garcia and Long Beach Mayor Robert Garcia, both Democrats (the two do not appear to be related). Robert Garcia has already unveiled endorsements from Gov. Gavin Newsom, Sen. Alex Padilla, and nine members of California’s House delegation.

MICHIGAN 8TH CD. Democratic Rep. Dan Kildee has announced that he’ll defend the new 8th District, a seat that is a smidge bluer than his existing 5th District: Kildee’s current constituency supported Joe Biden 51.4-47.1, while the new 8th would have gone for him by a 50.8-46.1 spread. The incumbent is hardly safe from Republican opposition under the new lines, though, and Politico reports that 2018 gubernatorial nominee Bill Schuette, who served in the House from 1985 to 1991, is considering running here.

CALIFORNIA 40TH CD. Mission Viejo Councilman Greg Raths, who lost to Democratic Rep. Katie Porter 53-47 in the old 45th District in 2020, said shortly after California’s new maps were finalized that he’d run for Congress again in the new 40th. Later that same day, however, Republican Rep. Young Kim, who represents the old 39th, announced that she’d seek re-election in the 40th herself. Raths, though, does not seem deterred, as his social media posts indicate he’s still forging ahead with his bid. Kim does not live in the new 40th and currently represents just 20% of the district, which would have voted for Donald Trump 52-46.

MICHIGAN 3RD CD. Republican Rep. Peter Meijer announced last week that he would defend the newly drawn 3rd District, which the new map transforms from a 51-47 Trump seat to a constituency Joe Biden would have carried 50-47. Meijer, who was one of 10 House Republicans who voted to impeach Donald Trump, will need to turn back a primary challenge from Trump-backed conservative commentator John Gibbs before he can focus on a potentially challenging general election, though.