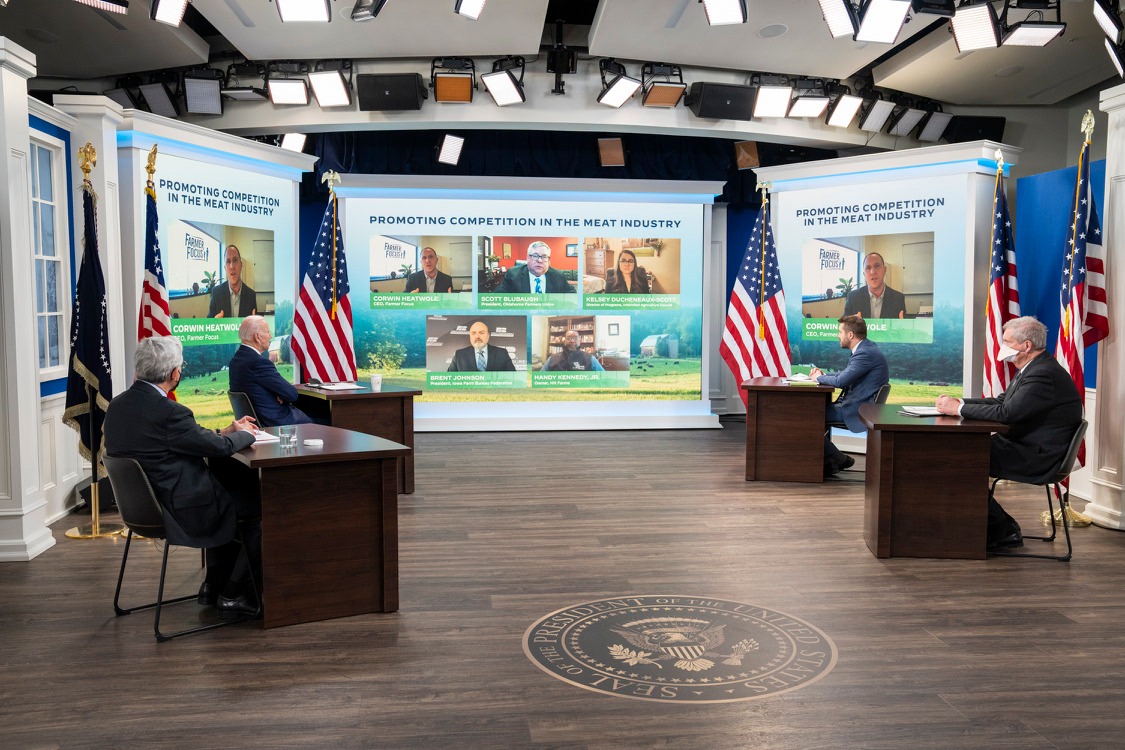 Cook Political Report: “The surprising good news for Democrats: on the current trajectory, there will be a few more Biden-won districts after redistricting than there are now — producing a congressional map slightly less biased in the GOP’s favor than the last decade’s. The bad news for Democrats: if President Biden’s approval ratings are still mired in the low-to-mid 40s in November, that won’t be enough to save their razor-thin House majority (currently 221 to 212 seats).”

Key takeaway: “Because Democrats currently possess the lion’s share of marginal seats, estimating the practical effect of new lines in 2022 still points towards a wash or a slight GOP gain.”

Washington Post:  Far-right influencers and QAnon devotees are battling over online audiences in the power vacuum created by Trump’s departure from office

The infighting reflects the diminishing financial rewards for the merchants of right-wing disinformation, whose battles center not on policy or doctrine but on the treasures of online fame: viewer donations and subscriptions; paid appearances at rallies and conferences; and crowds of followers to buy their books and merchandise.

But it also reflects a broader confusion in the year since QAnon’s faceless nonsense-peddler, Q, went mysteriously silent.

Without Q’s cryptic messages, influencers who once hung on Q’s every “drop” have started fighting to “grab the throne to become the new point person for the movement,” said Sara Aniano, a Monmouth University graduate student of communication studying far-right rhetoric and conspiracy theories on social media.

Michael Tesler: “While rank-and-file Republicans have remained loyal to Trump to this day, both Pence and McConnell have paid a steep political price for their actions on Jan. 6.”

IL-01: Illinois Rep. Bobby Rush, whose victory over then-state Sen. Barack Obama in the 2000 Democratic primary makes him the only person to ever beat the future president, announced Monday evening that he would not seek a 16th term representing the 1st Congressional District. The redrawn version of this constituency, a majority Black district that includes the South Side of Chicago as well as suburban areas to the southwest, backed Joe Biden 70-28, and there’s no question that the winner of the June Democratic primary will easily prevail in the general election.

And unsurprisingly, there are plenty of Windy City-based politicians who could run to succeed the longtime incumbent. Chicago Business’ Greg Hinz relays that there’s chatter that state Rep. Lamont Robinson will get in, while Chicago Aldermen Pat Dowell and Roderick Sawyer each tell him they’re considering. Dowell is currently waging a bid for secretary of state while Sawyer is the son of the late Mayor Eugene Sawyer, who was named mayor following Harold Washington’s death in 1987.

Both reporters, as well as NBC5’s Mary Ann Ahern, also mention several others as possibilities:

Kapos also name-drops Rush’s son, Flynn Rush, who is currently running for the Metropolitan Water Reclamation District. However, while state Rep. Kam Buckner was initially talked about as a possibility, he told Hinz he wouldn’t go for it.

4Q FUNDRAISING. Welcome back to the most magical time of the season! The deadline for House and Senate candidates to file their quarterly fundraising reports (covering the period from Oct. 1 through Dec. 31 of 2021) is Jan. 31, but it’s common for campaigns to leak their numbers early to generate some press. (Deadlines vary by state for gubernatorial contenders and often aren’t quarterly.)

PENNSYLVANIA U.S. SENATOR. Two notable Philadelphia unions, the Building Trades Council and the Laborers District Council, are both set to back Rep. Conor Lamb in May’s Democratic Senate primary on Wednesday, reports the Philadelphia Inquirer’s Jonathan Tamari. Lamb represents western Pennsylvania in the House, so these endorsements from the other end of the state, notes Tamari, are “a potentially significant statement of Philly support for Lamb.”

SOUTH DAKOTA U.S. SENATOR. John Thune, the number two-ranking Republican in the Senate, will supposedly end his dithering and finally announce whether he’ll seek re-election this week, he tells CNN’s Manu Raju. Or will he? When Raju asked if Thune had in fact already made up his mind, the senator responded: “Kind of.”

CALIFORNIA GOVERNOR. Conservative radio host Larry Elder, who said on the day of last year’s failed recall of Gov. Gavin Newsom that he’s “not going to leave the stage,” has announced that he’s going to leave the stage. Elder said on Tuesday that he would not run for governor again this year, despite saying a month prior to the recall that he would “very likely” seek a rematch “in the unlikely event” he were to lose.

MARYLAND GOVERNOR. Former RNC chair Michael Steele finally announced Monday that he’d decided not to run for governor. The one-time lieutenant governor had formed an exploratory committee in July, but it would have been extremely tough to imagine Steele, who backed Joe Biden in 2020, winning a Republican primary in this day and age.

MICHIGAN 14TH CD. Rep. Brenda Lawrence (D-MI) said she would not seek another term after serving eight years in Congress, making her the 25th House Democrat this year to announce plans to retire, The Hill reports.

MISSOURI 4TH CD. Politico reports that state Sen. Denny Hoskins, who is a member of the redistricting committee, is considering entering the Republican primary for the open and safely red 4th District.

ALABAMA GOVERNOR. Former Ambassador to Slovenia Lindy Blanchard has launched her opening TV ad campaign well ahead of the May Republican nomination fight, and her campaign says the buy is $1.2 million for three weeks. Blanchard’s commercials focus on her biography, ties to Donald Trump, and opposition to vaccine and mask mandates; the spots, however, don’t mention Gov. Kay Ivey, whom Blanchard is hoping to beat in the primary.

CALIFORNIA 3RD CD and 5TH CD. Republican Rep. Tom McClintock, whose wife died last month, has not yet announced re-election plans, though his campaign says he’s considering both the new 3rd and 5th. However, just before resigning from Congress, former Rep. Devin Nunes exhorted his colleague to run in the redrawn 5th, which would have voted for Donald Trump 57-41, per DRA.

GOP state Sen. Andreas Borgeas is also apparently eyeing a bid for the 5th, but another Republican considering a campaign for Congress, Fresno County Supervisor Nathan Magsig, alluded to the impact McClintock would have on the race, saying, “I consider McClintock a friend” when asked if he might run against the congressman. (Magsig said last month that he’d run to succeed Nunes, but that was before redistricting.)

If McClintock does in fact seek another term 5th, we’d regard his old district—the 4th—as the predecessor of the new 5th, even though more of the old 4th wound up in the 3rd (57%) than in the 5th (41%).

As for the 3rd, Republican Assemblyman Kevin Kiley says he plans to run here on the belief that McClintock will indeed switch over to the 5th; Kiley ran in last year’s gubernatorial recall and finished sixth on the moot replacement-candidate question with just 3.5% of the vote. Democrat Kermit Jones, a Navy veteran who’d been challenging McClintock in the old 4th, also says he’s running in the 3rd, which would have gone for Trump 52-45.

FLORIDA 7TH CD. Democratic Rep. Stephanie Murphy surprised political observers on Dec. 20 when she announced that she would not seek a fourth term. The current version of Murphy’s suburban Orlando seat supported Joe Biden by a 55-44 margin, but no one knows what it will look like once the Republican-dominated legislature is done with redistricting.

Florida Politics soon said that four Democrats were considering running: state Reps. Anna Eskamani and Carlos Guillermo Smith; Orange County Commissioner Emily Bonilla; and Chris King, who was the 2018 nominee for lieutenant governor. The only one who appears to have said anything publicly is Eskamani, who told the Orlando Sentinel she was “focused on my re-election for the Florida House.” She added, “It’s also premature for me to make any decisions for higher office without finalized maps.”

CALIFORNIA 47TH CD. Democratic Rep. Katie Porter, who currently represents California’s old 45th District, says she’ll seek re-election in the new 47th, a coastal Orange County seat that would have voted 52-45 for Joe Biden. As a consequence, former Democratic Rep. Harley Rouda, who’d been seeking a comeback in the old 48th against Republican Rep. Michelle Steel, announced that he was abandoning his campaign.

Porter did pick up a challenge, however, from former Orange County GOP chair Scott Baugh, who entered the race with Steel’s endorsement. Baugh finished fourth in 2018’s top-two primary for the old 48th with 16% of the vote but came close to locking Democrats out of the general election (which was won by Rouda).

When asked last month about a possible run for this seat, Republican state Sen. Anthony Bucco replied, “You never say never, but I’m very comfortable where I am … Right now, I do not have any desire at this point to take on another election next year.”