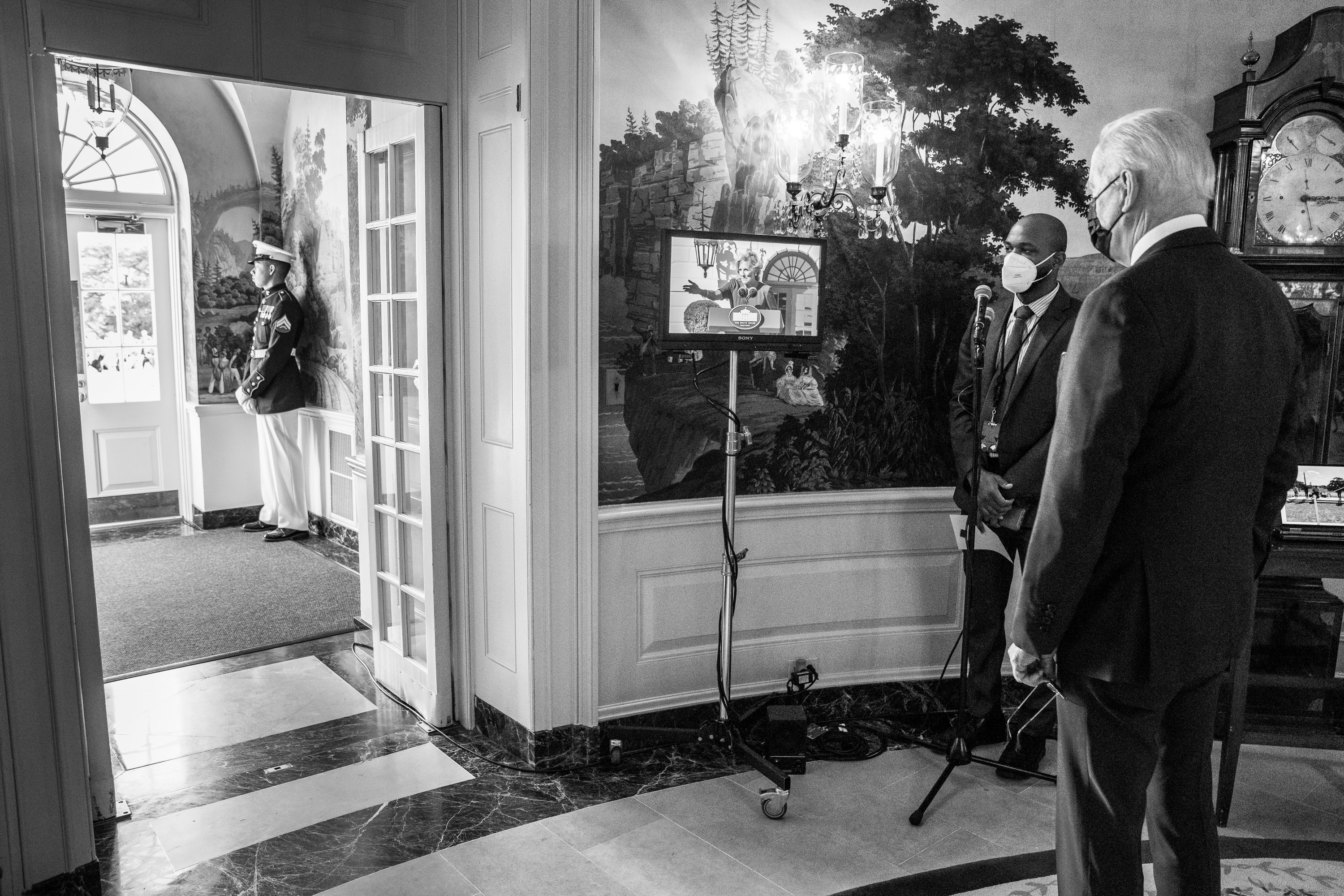 A new Washington Post-University of Maryland poll finds “the percentage of Americans who say violent action against the government is justified at times stands at 34%, which is considerably higher than in past polls by The Post or other major news organizations dating back more than two decades.”

And the view is partisan: “The new survey finds 40 percent of Republicans, 41 percent of independents and 23 percent of Democrats saying violence is sometimes justified.”

A new CBS/YouGov poll finds that 68% of respondents see the Jan. 6 attacks as “a harbinger of increasing political violence, not an isolated incident.”

The Atlantic: “Donald Trump will own the midterms just as much as Joe Biden will. Voters’ verdicts on Trump will come in Idaho, Alabama, and Georgia this spring. Then in Arizona, Alaska, and Wyoming in summer. Trump has already endorsed candidates in 2022 primary contests in all of those states. He’s made picks in nearly 40 congressional races to date, most recently training his ammunition on the House Republicans who voted for the bipartisan infrastructure package. He’s made another nine endorsements in gubernatorial primaries, including one against the GOP incumbent in Idaho.”

“The former president’s ultimate record in these races will serve as the first barometer of his continued strength as he eyes a comeback bid for the White House in 2024. So far, his picks have lifted challengers to GOP incumbents who have crossed him and a bevy of newcomers who are eager to align with his brand.”

Jonathan Last: “We’ve been doing more than 1,000 deaths a day since August 21. For most of this stretch, the daily average has been in excess of 1,500 deaths per day. Just do the math. Unless the daily deaths change, we’re headed to a million dead by spring.”

“Republicans are going to use this fact to attack the Biden administration, saying that Biden handled Covid worse than Trump, because there were more deaths on his watch.”

“This is an obscene argument. Republicans have done everything possible to prolong Covid and prevent the implementation of measures that would have saved lives. It’s like an arsonist pouring gasoline, throwing matches, and then complaining about the fire department not putting out fires fast enough.”

“But as a political matter? I suspect the Republican argument will be effective with voters.”

“When Joe Biden first came into office, progressives said he could be the next FDR,” Politico reports.

“Now, as Biden’s relationship with the left has come under strain, liberals are talking about treating him like former President Jimmy Carter instead — and mapping out a Democratic primary challenge in 2024.”

Big caveat: “No one now in office — and none of the top-tier presidential contenders from 2020 — is viewed as a serious prospect to take on Biden.”

Nor is there any expectation that [Sen. Bernie] Sanders or Sen. Elizabeth Warren, both of whom have enjoyed a significant amount of influence in the Biden administration, would primary Biden. Few seriously think [Rep. Alexandria ] Ocasion-Cortez would risk her political capital in a long-shot challenge to the president, either,” Holly Otterbein reports.

Associated Press: “Entering a pivotal election year, a resurgent GOP is poised to reclaim one, if not both, chambers of Congress and retain its lock on dozens of state legislatures and governor’s offices. While victory is far from assured, the GOP’s confidence is fueled by President Joe Biden’sunderwhelming poll numbers, a Democratic economic and social agenda that’s faltering, intensifying concerns about inflation, and deepening frustration with the pandemic, which is unleashing yet another wave of infections upon an exhausted nation.”

“But at its most basic level, the Republican Party’s optimism is born of the same political headwinds that have shaped U.S. politics for decades. The party that controls the White House — Democrats, in this case — has a tremendous disadvantage in the first election of a new presidency. Adding to that challenge, Democrats are struggling to prevent a far-reaching Republican campaign to make voting more difficult for core Democratic constituents while installing a slate of election officials allied with Trump.”

“We’re going to have a hell of a year… Every state that Biden won by less than 10 is now a battleground state.”  — Sen. Rick Scott (R-FL), quoted by the Associated Press.

Amy Walter: “It feels safer to bet on unpredictability than stability in this era of tremendous political and social churn and upheaval. While we know that the midterm elections favor the ‘out’ party (i.e. the party that doesn’t control the White House), many wonder if history can be a reliable guide when it feels as if history is being rewritten on a daily basis?”

“After all, there’s plenty about 2022 that’s unique. It’s the first since 2002 that corresponds with redistricting; the first since at least 1998 that Democrats are not defending any Senate seats carried by the Republican presidential nominee two years earlier; and the first in memory where a defeated president is playing an outsized role.”

“Yet, there’s more this upcoming midterm has in common with its predecessors. Or, to paraphrase Mark Twain, history may not repeat itself, but it does rhyme.”

Jonathan Last: “My guess is that Dems will lose at least 50 seats in the House. And then the Senate tips over, too. Though that’s less of a sure thing.”

Alaska’s Gov. Mike Dunleavy (R) accepted the endorsement of former President Donald Trump, which came on the condition the governor does not, in turn, endorse Sen. Lisa Murkowski (R-AK) in her reelection bid, The Hill reports.

It was not clear if Dunleavy meant for his note to Trump to be public, but it was released with Trump’s statement.

Susan Glasser: “The best thing you can say about 2021 is that it will soon be over. A year that started with an insurrection at the Capitol is ending with more than eight hundred thousand Americans dead in the COVID pandemic, as a contagious new variant, Omicron, produces the biggest wave of cases yet. Inflation is the highest it has been in decades. The twenty-year U.S. war in Afghanistan concluded with an embarrassing and botched American retreat. The Republican Party, rather than rejecting the defeated ex-President, has redoubled its commitment to Trump and Trumpism, purged dissenters, and embraced outright denialism, whether of vaccines or election results.”

“Who’d have thought that 2020 would ever look good by comparison?”

Rep. Peter Meijer (R-MI) told NBC News that the GOP has “no other option” than to back former President Donald Trump.

Said Meijer: “Given how President Biden, when he was elected into office, you know, said he would be moderate and look for bipartisan solutions. But then after, and frankly, I blame the former president for this, after we lost the two Senate seats in Georgia and the Senate flipped, it became an exercise in trying to be an LBJ or FDR style presidency and enact transformational change in the absence of any compelling mandate from the American people to do so.”

He added: “So that gave the rallying signal, that created a very steep divide, and at the end of the day, there’s no other option right now in the Republican Party.”

TIME:  Biden’s Been Counted Out Before—And Loves To Prove the Haters Wrong

It’s been an easy idea to hold over the years, a tempting one at times, really: Joe Biden is dunzo and isn’t coming back from this setback. The 1972 death of his wife and daughter, before he even got sworn into office. The plagiarism scandal that ushered him from the 1988 presidential race. A less-than-1% showing in Iowa 20 years later. The death of Beau Biden. A “gut punch” of a fourth-place finish in Iowa in 2020. And yet Biden got up off the mat every time. Joe Biden doesn’t always win, but he certainly doesn’t quit.