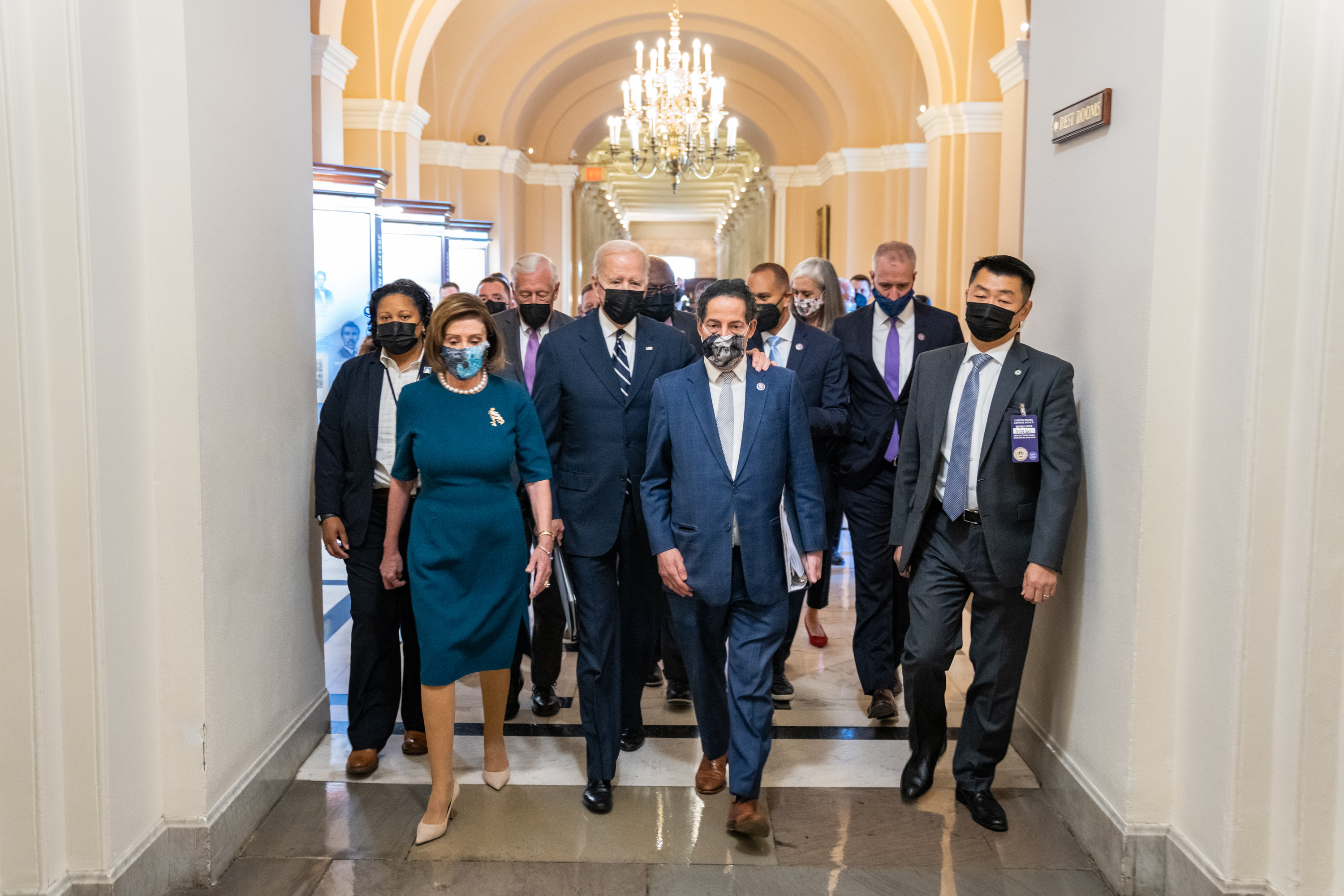 The New York Times looks at the qualified small business stock exemption, which allows the mega-wealthy to avoid paying taxes.

“The story of the tax break is in many ways the story of U.S. tax policy writ large. Congress enacts a loophole-laden law whose benefits skew toward the ultrarich. Lobbyists defeat efforts to rein it in. Then creative tax specialists at law, accounting and Wall Street firms transform it into something far more generous than what lawmakers had contemplated.”

“Federal prosecutors are increasingly using racketeering statutes to go after a broader array of criminal activity, applying them in ways that deviate from the law’s original goal of dismantling organized crime,” the Wall Street Journal reports.

Wall Street Journal: “In interviews with more than four dozen lawmakers and congressional aides, people of all political stripes say the House has become a deeply unpleasant place to work, with simmering ill feeling and a series of ugly incidents fraying remaining bipartisan ties. Today, magnetometers meant to detect weapons beep regularly as House lawmakers enter and exit the chamber that was breached almost a year ago, serving as a regular reminder of the attack.”

Said House Majority Leader Steny Hoyer (D-MD): “It’s as bad as I’ve seen it. The toxic environment has been building for a long, long time before Jan. 6, but Jan. 6 just blew it up in flames.”

“A live-streamed televised debate in Jordan’s parliament on constitutional reforms including gender equality degenerated into scuffles between MPs on Tuesday, forcing the session to be adjourned,” the Times of Israel reports.

Reuters: “Live footage on state media showed several MP’s punching each other while one deputy fell to the ground as others shouted in chaotic scenes that lasted a few minutes.”

“The Hong Kong police on Wednesday arrested six current or former senior staff members of an outspoken pro-democracy news website in a morning raid, yet another crackdown by the government on the city’s once-vibrant independent press,” the New York Times reports.

Helen Branswell/STAT on 10 lessons I’ve learned from the Covid–19 pandemic: “The guiding principle of outbreak response is hope for the best but prepare for the worst. It has felt too often in this pandemic that people are forgetting about the second part of that maxim. We’re seeing it even now with responses to the surging wave of Omicron cases.

It is true that public health authorities can get hammered if they sound the alarm for something that turns out not to merit it. The World Health Organization was pilloried by the European Parliament after the 2009 H1N1 flu pandemic ultimately proved not to be particularly deadly.

But with fast-developing disease outbreaks, if you wait until you’re sure that something is going to be a disaster before seizing every opportunity to alter its trajectory, you’ve made the outbreak much, much worse.

Duaa Eldeib/ProPublica:  “The pandemic killed so many dialysis patients that their total number shrunk for the first time in nearly half a century. Few people took notice

Then COVID-19 struck. Nearly 18,000 more dialysis patients died in 2020 than would have been expected based on previous years. That staggering toll represents an increase of nearly 20% from 2019, when more than 96,000 patients on dialysis died, according to federal data released this month.

The loss led to an unprecedented outcome: The nation’s dialysis population shrank, the first decline since the U.S. began keeping detailed numbers nearly a half century ago.

They were COVID-19’s perfect victims.”

Amelia Nierenberg/NY Times: “The looming wave is shaking the rickety infrastructure that has kept schools running.

Across the nation’s 13,000 districts and 98,000 public schools this week, there are about 600 shuttered schools or districts, according to data from Burbio, a company that has tracked how schools have operated through the pandemic. There are fewer closures now than in November.

But the Omicron variant appears contagious enough to upend the shaky equilibrium that has allowed schools to stay open. Many are in dire need of substitute teachers and bus drivers, and can ill afford an outbreak that would send many staff members home.”

Mark Joseph Stern: “He is getting judges confirmed at a record pace, and his selections have been incredible.

There are two defining features of Biden’s push to remake the federal judiciary: speed and diversity. Let’s start with speed. In his first year, just 19 of Trump’s judicial nominees had received Senate confirmation. For President Barack Obama, that number was 13; for Presidents George W. Bush and Bill Clinton, it was 28. Biden, by contrast, has seen 40 of his judges confirmed already—the most since President Ronald Reagan. Eleven of Biden’s judges sit on the powerful U.S. Court of Appeals, where most federal cases are resolved. (For comparison, Obama placed just three judges on the Court of Appeals in his first year.)

Now turn to the other extraordinary aspect of Biden’s judicial nominees: their unprecedented demographic and professional diversity. In a comprehensive report, Alliance for Justice has highlighted the many firsts among this crop of judges: the first openly lesbian judge on the Court of Appeals (Beth Robinson); the first Korean American to sit on the Court of Appeals (Lucy Koh); the first Muslim federal judge (Zahid Quraishi); the first Black judge on the U.S. Court of Appeals for the Federal Circuit (Tiffany Cunningham); the first woman of color to serve on the U.S. District Court in Maryland (Lydia Griggsby); the first Native American federal judge in Washington state (Lauren J. King)—the list goes on. According to Alliance for Justice, nearly 75 percent of Biden’s judicial nominees are women, and nearly 65 percent are people of color. For comparison, only 24 percent of Trump’s judicial nominees were women, and just 16 percent were people of color.

“George W Bush admitted he knew little about international affairs at his first meeting with Britain’s ambassador to the US,” the Daily Mail reports.

Wrote Christopher Meyer when he met with the then Texas governor in 1998: “Bush admitted that, apart from Mexico, he did not know much about international affairs and that he would do well to broaden his experience… His world view – as he is well aware – is largely limited to the Texan and Mexican horizons.”

“Iran on Thursday announced it launched a satellite carrier rocket bearing three devices into space, though it’s unclear whether any of the objects entered orbit around the Earth,” the AP reports.

“The state TV report, as well as others by Iran’s semiofficial news agencies, did not say when the launch was conducted nor what devices the carrier brought with it. However, the launch comes amid difficult negotiations in Vienna over Iran’s tattered nuclear deal.”

Renée Graham writes for The Boston Globe that even with a year that has been unexpectedly filled with “frustration and fear” almost behind us, and a dim immediate future that lies ahead, there are still reasons for hope.

If 2020 closed with very cautious optimism, 2021 is ending with the pandemic-driven uncertainties of what might lie ahead, especially with only 62 percent “fully vaccinated.” Let’s hope the Centers for Disease Control and Prevention, which is strongly encouraging booster shots, finally abandons that now-outdated definition.

We shouldn’t be in this spot, yet we’re clinging to the idea that perhaps the worst of this pandemic lies behind us. (Unless every country worldwide has equal access to the vaccinations, this won’t end any time soon.) We are tired and demoralized by a virus that shows little mercy and too many people who are still opting for selfish ideology over the greater good.

Yet 2022 beckons and even dimming hope is still hope. It’s what has gotten us up each day to fashion new routines, carve out some solace, and not let our anxieties consume us even as we were making and remaking our lives as we went along.

Jose A. Del Real of The Washington Post reports from Dealey Plaza in Dallas, reflecting on the draw of conspiracy theories in the past and the present.

I have spent this year thinking and writing about the draw to conspiracy theories, the perverse comfort they provide and the damage they can cause. Today in the United States, we are living in an era of segregated belief, of divergent realities, at a time when social media has brought us nearer to one another than ever before. It is not just that there is disagreement. Certified and recertified elections are in dispute. Viruses and their lifesaving vaccines are in dispute. So often, facts themselves are in dispute. My focus has been on telling intimate stories about people navigating these conflicts within their families and communities.

Now I see a grander lesson about truth in Dealey Plaza, one I have been circling for years. That The Truth is not something merely to be found and disclosed, but rather that, in the broader sense, it is something that is negotiated, something that is mediated over time through credibility and trust. That, in the absence of those things, evidence can be so very easily overtaken by fantasy, and stay that way.

QAnon followers believe that former president Donald Trump spent his time as president battling a cabal of Satan-worshiping “deep state” Democrats who traffic children for sex, a paranoia that has often led to valuable resources being diverted away from real missing children cases. Since the 2020 election, they have also come to believe that Trump’s loss was the result of massive fraud, a disproved conspiracy theory that has in turn created a real threat to our democracy and elections. Going further than the 7 in 10 Republican voters who believe the same election conspiracy, Q followers also assure with prophetic zeal that Trump will be reinstated imminently. Mass arrests of the country’s corrupt elite and a “Great Awakening” will follow, they say.

That’s actually why I came here.

Manuel Ansede writes for El País (in English) that it remains unknown whether the omicron variant is a milder strain of COVID-19 than the original “wild type” or the delta variant.

When analyzed, it appears that the risk of the new variant is lower, but a study from Imperial College London published just before Christmas reveals that up to 40% of omicron cases could be people who have already had Covid-19, compared to 8% with delta. Both variants are highly contagious among the unvaccinated, but omicron is also capable of infecting a significantly larger number of people who already have good defenses, making it seem less serious.

The question is whether the new variant is in fact milder than previous ones. US biologist Marm Kilpatrick from the University of California puts it this way: “The short answer is that we don’t know yet.” The Imperial College report shows that the likelihood of ending up in hospital with omicron is up to 45% lower than with delta. However, without taking into account the effect of the higher number of mild cases resulting from reinfections, the authors of the report estimate that the probability of ending up in hospital with omicron could be only 2 to 35% lower than with delta. “This small difference in severity would be far outweighed by the large number of cases caused by omicron, which will result in many hospitalizations. If it really is milder, it’s not that much milder, so it’s not a reason to be complacent about the increase in cases of omicron,” Kilpatrick adds.

The problem is the sheer volume of the current wave. If the probability of ending up in hospital with omicron were even 50% lower than with delta, with cases doubling every two days, there would be the same number of Covid admissions within the space of two days, according to epidemiologist Deepti Gurdasani, from Queen Mary University of London. And cases of omicron have indeed been doubling every two days in many countries. The Institute for Health Metrics and Evaluation at the University of Washington estimated on December 22 that three billion people will be infected with the new variant in the next three months. If these estimates are confirmed, there will be as many cases in the next quarter as there have been over two years.