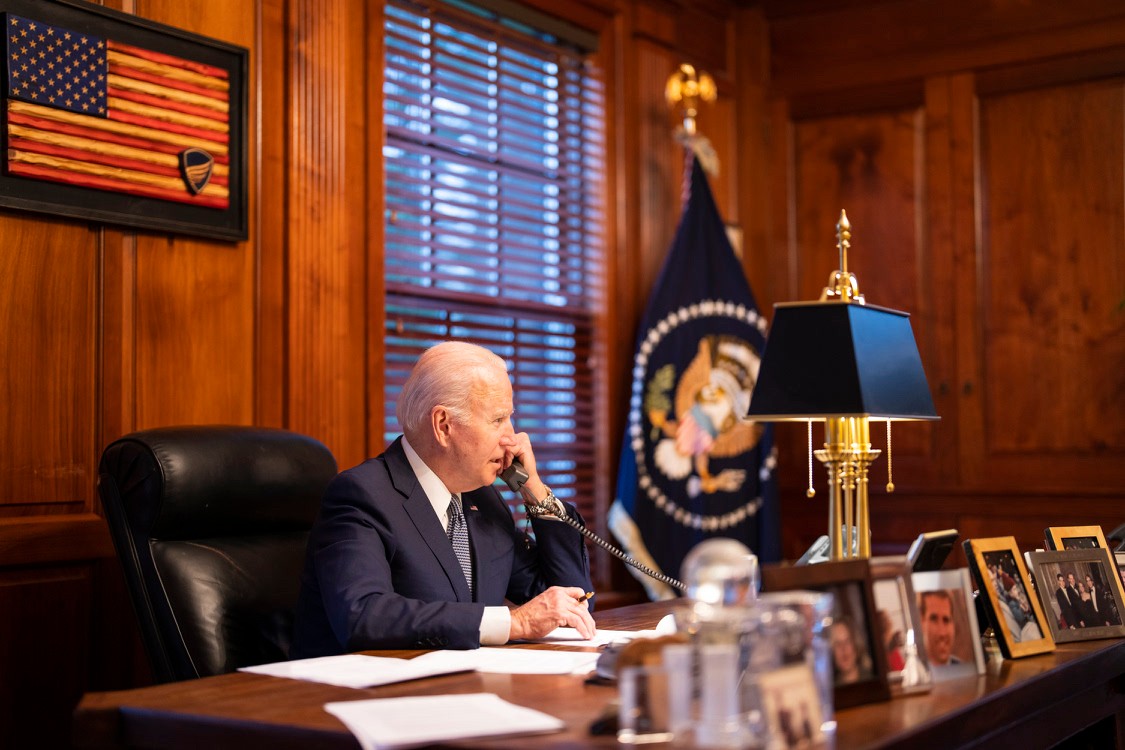 Joshua Spivak: “This year saw the most recalls attempted since this blog started in 2011 — at least 609 attempts. But unlike most years, when the recall gets to the ballot about one-quarter to one-third of the time, this year, most of the recalls went nowhere. Only 66 went to the ballot and 17 others resigned.”

However, three Democratic-held seats are now rated Lean Republican and another two are rated Likely Republican. In comparison, just one Republican-held seat is currently Lean Democrat.

Republicans need to net just five seats in take control of the House, a goal these ratings show is clearly within reach.

David Wasserman has some important caveats, including the fact that 19 states still aren’t included on this chart because they haven’t finalized district lines.

It also doesn’t include two “safe flips” from Democrat to Republican in Georgia and North Carolina redistricting.

“An Oregon man who invoked a coded vulgar insult of President Biden during a Christmas Eve call-in event with the president and first lady is considering running for office and says he would welcome former president Donald Trump’s blessing,” the Washington Post reports.

Said Jared Schmeck: “I want to pray about it, see what God has for me.”

He added: “At the end of the day, I want God’s will for my life and the direction that it goes. And I strongly believe that standing up is the right thing to do here as long as that message that I’m portraying is glorifying his name. And yeah, I’ll see where it goes.”

A new Gallup poll found that 52% of Republicans disapproved of the job that Mitch McConnell was doing as Senate minority leader as former President Donald Trump continued to call for the Kentucky Republican’s ouster.

Meanwhile, 46% of Republicans said they approved of McConnell — a dismal approval rating in comparison to the 71% approval rating by the same group for his counterpart in the other chamber, House Minority Leader Kevin McCarthy.

Roberts had the highest job-approval rating out of all the figures polled, with 60% overall — including 57% of Republicans and 55% of Democrats — while McConnell had the lowest: 34% overall.

Taylor Kenney (R), a onetime contender for Virginia’s competitive 7th congressional district, said that she is no longer running after recently approved redistricting maps reshaped the district and moved it north, the AP reports.

The district is currently represented by Rep. Abigail Spanberger (D-VA), who announced a day earlier that she would seek reelection under the new boundaries.

Former North Carolina Rep. Mark Walker (R) is “stuck in political no man’s land,” Natalie Allison reports from Greensboro. Running a distant third in a Senate primary against Trump-endorsed Rep. Ted Budd and former Gov. Mat McCrory, Walker was privately offered an endorsement from Trump if he runs for a House seat instead. The problem: The newly-created seat is being challenged in court and could be redrawn to be heavily Democratic. Now Walker — a pol who Allison writes “just isn’t interested in following the conventional rulebook for the game of politics” — is “once again a candidate in search of a race he can win.”

Republicans are attempting to recruit John James, an Army veteran, to run for one of Michigan’s newly drawn districts. James ran for the state’s Senate seat in both 2018 and 2020, but lost both times. “Recruiting James has been a top priority of House Minority Leader Kevin McCarthy. And the Congressional Leadership Fund, a super PAC with close ties to GOP leadership, commissioned a poll that shows James significantly ahead of two sitting Democratic representatives in potential matchups in the new district,” Zach Montellaro and Ally Mutnick report.

While The Detroit News reported Tuesday that James is “strongly considering” a run for the state’s newly-created 10th district, he is also being pushed to run for governor. A final decision would come in January, and “he hasn’t ruled anything out.”

“One of the country’s most gerrymandered political maps has suddenly been replaced by one of the fairest,” the New York Times reports.

“A decade after Michigan Republicans gave themselves seemingly impregnable majorities in the state Legislature by drawing districts that heavily favored their party, a newly created independent commission approved maps late Tuesday that create districts so competitive that Democrats have a fighting chance of recapturing the State Senate for the first time since 1984.”

NYT’s Nick Corasaniti notes that the approved redrawn map of the state allows for more competition, in a state where Republicans have had safe majorities for years. The map “creates districts so competitive that Democrats have a fighting chance of recapturing the State Senate for the first time since 1984. … and the congressional map includes three tossup seats where the 2020 presidential margin was less than five points, and two more seats that could be competitive in a wave year, with presidential margins of less than 10 points.”

Trump-supporting Republicans are running for statewide election offices that will play important roles in the 2024 presidential election. And AP’s Nick Riccardi reports that “while the effort is incomplete and uneven, outside experts on democracy and Democrats are sounding alarms, warning that the U.S. is witnessing a ‘slow-motion insurrection’ with a better chance of success than Trump’s failed power grab last year. … Experts say another baseless challenge to an election has become more likely, not less.”

Damon Linker writes for The Week that political vulgarity and the “politics of degradation” need to stop.

“It would be one thing if this demotic and venomous form of politics arose from parts of the rural heartland of the country and faced pushback from people in positions of authority in the Republican Party and conservative media personalities. But instead, these figures encourage it, in the hopes of riding the anger to higher ratings and electoral victories.

And what about those who should know better? The fact is that many conservative-minded pundits and analysts hesitate to condemn the rise of a form of gutter politics in which boors and bullies set the tone and are rewarded for injecting their poison into the body politic. The more high-minded ones, meanwhile, skirt the question of whether it’s bad to tell the president of the United States and those who voted for him to f–k off. Instead, they attempt to steer the conversation in the direction of the Constitution and the Bill of Rights. Of course, they’ll insist, Americans should be allowed to denounce and even insult the president!

Too bad no one is suggesting otherwise. The question isn’t whether people should be jailed for raising such a flag but whether it’s appropriate, or civically advisable, to do so — and also whether those who live in the vicinity of someone who displays one should express disapproval or turn a blind eye to it out of a desire to avoid a confrontation.”

“If I were a betting person, I’d say Trump is going to run again. If he’s not held accountable and he gets to do it again, I think that could be the end of our democracy.”

— Hillary Clinton, in a MSNBC interview.