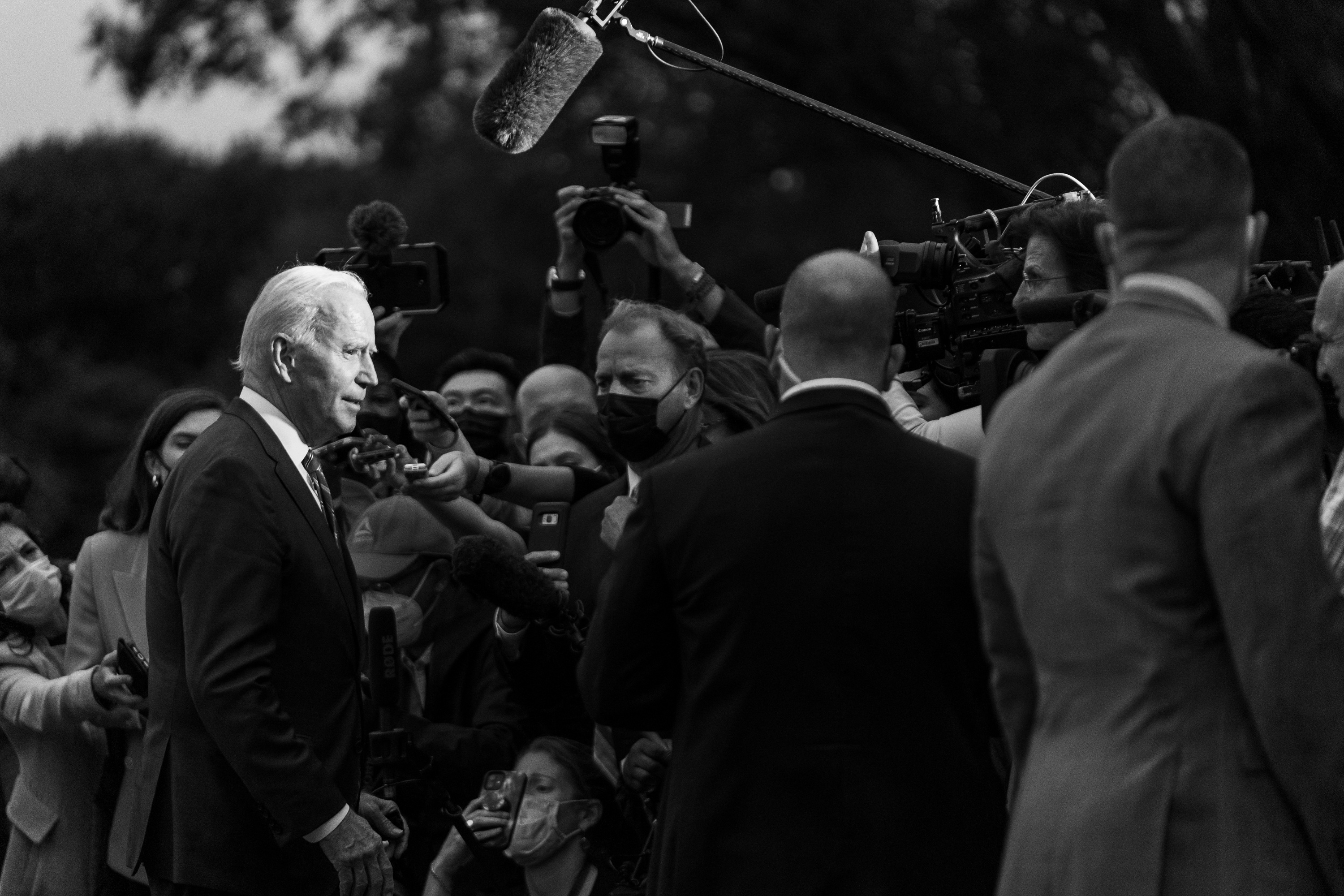 Initial filings for unemployment insurance dipped last week to 198,000 and remained close to their lowest level in more than 50 years, CNBC reports.

Wall Street Journal: “Applications for unemployment benefits, a proxy for layoffs, have trended near five-decade lows in recent weeks… Last week’s four-week moving average, which smooths out volatility, fell to the lowest level since October 1969.”

“Lawyers for former president Donald Trump told the Supreme Court on Wednesday that a Washington Post interview with the chairman of the House select committee investigating the Jan. 6 attack on the Capitol shows the committee is trying to establish a criminal complaint against Trump, something the lawyers say is beyond the committee’s authority,” the Washington Post reports.

… In the article, “Chairman Bennie Thompson said the committee is looking intently into Trump’s actions on Jan. 6 as it considers whether to recommend that the Justice Department open a criminal investigation into the former president.” And that is perfectly within the Committee’s authority.

Randall D. Eliason: “At other times, during the course of its legislative or oversight work, Congress uncovers facts suggesting past criminal conduct unrelated to Congress itself. Again, here a referral alerts the Justice Department to the conduct so it can consider whether investigation and prosecution are appropriate. But the Justice Department does not need a referral from Congress to be aware of the potential crimes surrounding Jan. 6 — including those potentially committed by Trump himself.

The events leading up to the assault on the Capitol are widely known. They have been the subject of numerous media reports and books, not to mention a full impeachment proceeding. The riot is the subject of what is likely the largest and most complex federal criminal investigation in history, with hundreds of people already indicted. The Justice Department is deeply enmeshed in investigating the events of Jan. 6 and does not need a congressional heads-up.”

“With a caseload nearly twice that of the worst single days of last winter, the United States shattered its record for new daily coronavirus cases, a milestone that may still fall short of describing the true destruction caused by the Delta and Omicron variants because testing has slowed over the holidays,” the New York Times reports.

“As a second year of living with the pandemic was drawing to a close, the new daily case total topped 488,000 on Wednesday.”

“If your plans are to go to a 40-to-50-person New Year’s Eve party with all the bells and whistles and everybody hugging and kissing and wishing each other a happy new year? I would strongly recommend that this year we do not do that.” — Dr. Anthony Fauci, quoted by the Washington Post.

World Health Organization director-general Tedros Adhanom Ghebreyesus warned during a press conference Wednesday that the circulation of both the Omicron and Delta variants “is leading to a tsunami of cases,” Axios reports.

Said Tedros: “This virus will continue to evolve and threaten our health system if we do not improve the collective response.”

New York Times: “Across Europe, records for new coronavirus infections are falling by the day as the Omicron variant tears through populations with a swiftness outpacing anything witnessed over the past two years of the pandemic.”

“Airlines have been preparing for the holiday season for months, reviewing plans and readying reserves of workers. But that wasn’t enough to mitigate the effects of the fast-spreading Omicron coronavirus and of heavy snow and strong winds in the West,” the New York Times reports.

“The impact continued to be felt on Thursday, with more than 1,100 cancellations of flights to, from or within the United States by midday… By Thursday morning, the site was also showing more than 500 cancellations for Friday.”

Wall Street Journal: “The limited availability of test kits is frustrating people seeking tests and complicating efforts to curb the spread of the coronavirus when most needed… As a result, Omicron cases could continue to rapidly increase and possibly overwhelm strapped healthcare systems.”

“People across the country aired their exasperation on social media, detailing their often fruitless searches for tests at government sites, drugstores, hospitals and even fire departments. Helicopters dispatched by local newscasts showed crowded test sites on the ground below, and friends texted one another in search of information about where at-home test kits might be available.”

“It really had a lot to do with what we thought people would be able to tolerate.”  — CDC Director Rochelle Walensky, in an interview on CNN, on shortening the Covid-19 quarantine from 10 days to 5 days.

Washington Post: “The altered guidance, ambiguous research findings and continuing unknowns about omicron — and, perhaps most of all, the overwhelming desire after two years of a pandemic to return to normal life — have left people once again in the predicament of making personal risk calculations that may be not terribly better than wild guesses.”

“Twenty-six U.S. states will raise their minimum wage in 2022, but many workers will see more significant pay gains from employers that are raising their pay floor,” CNBC reports.

Alex Jones threatened to “dish all the dirt” on Donald Trump to get back at the former president for his embrace of the Covid-19 vaccines by saying they save lives, the Daily Beast reports.

Said Jones: “It’s not to hurt Trump, it’s so people can know how pathetic he is when you think he is playing 4D chess, going to save you and he’s not!”

Said Root: “He’s been right on everything except this issue. He’s so horribly wrong on this issue, and the best way to put it, ironically, is that he’s dead wrong, because people are dying!”

He added: “When everyone I know dies, you are getting the blame, President Trump!”

“As House ethics investigators were examining four cases this fall detailing a sweeping array of improper financial conduct by lawmakers, they ran into an obstacle: Two of the lawmakers under scrutiny refused to meet with them or provide documents,” the New York Times reports.

“The investigators were not too surprised. Over the past decade, fewer and fewer House members have been willing to cooperate with congressional investigations, a development that ethics experts warn could reduce accountability for misdeeds and erode trust in the institution of Congress.”

Wall Street Journal: “Wild weather around the world wreaked havoc on markets for raw materials, lifting prices for everything from electricity and heat to houses and breakfast cereal.”

“Policy makers and investors have debated the effects of fiscal and monetary policy on inflation, but a big reason for rising prices this year have been factors that neither lawmakers nor central banks can do much about. Prices for natural gas, lumber, corn, soybeans, wheat and other building blocks of modern commerce surged to multiyear highs—in some cases records—because of fire, freezes, flood, drought, hurricanes and some of the hottest weather ever.”

Meanwhile, Reuters says a warm spell in Alaska has brought temperatures soaring past 60 degrees, while the San Francisco Chronicle notes 9 feet of snow has fallen in parts of California.

“During a recent marathon session in the House, two Republican lawmakers from Georgia sat in full view of television cameras. Neither was wearing a mask,” the New York Times reports.

“It was the latest act of defiance by the pair, Representatives Marjorie Taylor Greene and Andrew Clyde, against a rule requiring legislators to wear masks on the House floor. Most Republican lawmakers, however grudgingly, have complied with the mandate, which can carry fines that quickly add up to hefty amounts. But Ms. Greene and Mr. Clyde have repeatedly, and proudly, flouted it.”

“To date, the two have incurred more than $100,000 combined in fines, which are taken directly from their paychecks.”

The CDC advises that travelers avoid all cruise ships due to “very high” levels of Covid-19, regardless of vaccination status.

Washington Post: “In a statement, the agency said cruise lines reported 5,013 covid-19 cases on ships operating in U.S. waters between Dec. 15 and 29, a massive increase from the 162 cases reported over the prior two weeks.”

“China will take ‘drastic measures’ if Taiwan makes moves towards formal independence, a Beijing official warned on Wednesday, adding that Taiwan’s provocations and outside meddling could intensify next year,” Reuters reports.

Meanwhile, “Chinese authorities are taking their dislike of tattoos one step further,” the South China Morning Post reports. “After moving to force football players to cover up their ink in 2018, a new directive from the General Administration of Sport has placed an outright ban on tattoos, and are even calling for players to have them removed altogether.”

“Armed police in Jingxi, in southern China, have paraded four alleged violators of Covid rules through the streets, state media reported, a practice that was banned but which has resurfaced in the struggle to enforce a zero-Covid policy,” The Guardian reports.

New York Times on the Biden-Putin Call yesterday: “Mr. Putin requested the call, the officials said. His desire to speak directly with Mr. Biden again set off speculation in Washington and Europe about whether Mr. Putin was trying to de-escalate a situation largely of his own creation, or whether he was seeking a response to a series of demands about Russian security concerns that, if left unfulfilled, may provide him with a pretext to initiate the military action he has threatened in Ukrainian territory.”

The White House’s language about the Russian build-up is alarming. The senior administration official said “we are at a moment of crisis,” that the Russian military presence around Ukraine has not de-escalated since Biden and Putin’s last call, and that it “remains a continuing source of grave concern.”

The official added that Biden would reiterate that a Russian advance into Ukraine was a dangerous red line for Putin to cross: “President Biden will also make clear when he speaks with President Putin that we are prepared for diplomacy and for a diplomatic path forward, but we are also prepared to respond if Russia advances with a further invasion of Ukraine.”

Stephen Collinson of CNN notes that the Biden administration is shifting their public health messaging about the COVID-19 pandemic, due to the emergence of the omicron variant.

Blizzards of new public health guidance on how long people should isolate after positive tests and when they should get tested risk further confusing a public that has already seen reversals and changes in such information — a downside of the battle against a pathogen that always seems one step ahead of efforts to combat it.

But the evolving administration approach is also one that could eventually point to a sustainable path back to something closer to normality for many Americans once the winter surge abates — a future in which Covid-19 will always be in the background and not eradicated.

A palpable shift in policy toward the virus and public perceptions of its impact are occurring during a holiday season in which many people — including those who made rigorous efforts to avoid it until now — have been infected or seen loved ones or friends test positive. This new pandemic reality comes as Omicron, which is far more infectious, takes over, although the previous Delta wave still has some regions in its grip. But with the public desperate for deliverance from a crisis that has pounded the nation’s psyche for parts of three winters, it is looking like economic and societal factors, rather than just epidemiology, are important in shaping the US response to the virus.