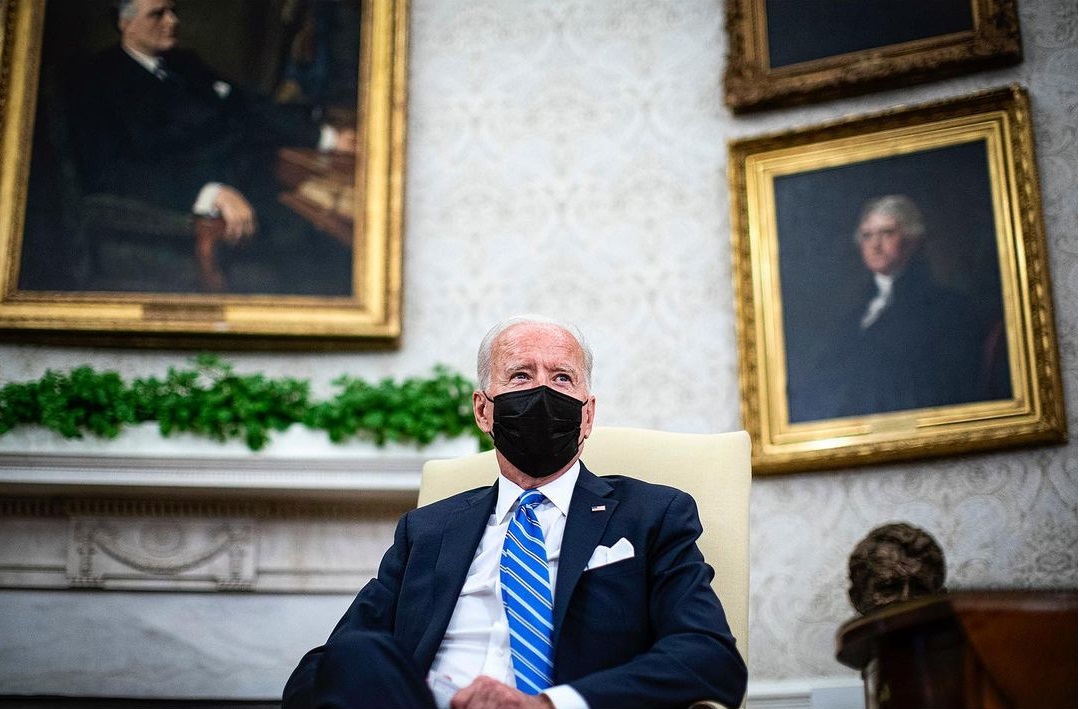 “As states grapple with how to rein in the spread of the Omicron variant, many governors and other state officials are applying a lighter touch than during previous surges, as they are armed with more tools to combat the virus and increasingly mindful of the economic harm caused by sweeping restrictions,” the Wall Street Journal reports.

“Many decision makers say they are trying to avoid strict measures enacted during previous Covid surges by encouraging vaccinations, increasing capacity for rapid testing and closely watching factors such as hospital admissions and booster-shot uptake.”

Washington Post: “Health officials’ recommendation this week to shorten the isolation period for people with asymptomatic coronavirus infections to five days was driven largely by the concern that essential services might be hobbled amid one of the worst infection surges of the pandemic.”

Associated Press: “The mayor of one of Florida’s largest counties on Tuesday blasted Republican Gov. Ron DeSantis, saying he has been missing in action during the latest wave of Covid-19, as some counties brought back mask mandates for government workers and other municipalities opened up new testing sites in response to overwhelming demand.”

Said Orange County Mayor Jerry Demings: “We have not received any assistance from the state of Florida at our testing sites. All Florida residents should be outraged … where is Ron DeSantis now?”

“At least five Republican-led states have extended unemployment benefits to people who’ve lost jobs over vaccine mandates — and a smattering of others may soon follow,” the Washington Post reports.

“Workers who quit or are fired for cause — including for defying company policy — are generally ineligible for jobless benefits. But Arkansas, Florida, Iowa, Kansas and Tennessee have carved out exceptions for those who won’t submit to the multi-shot coronavirus vaccine regimens that many companies now require.”

“Similar ideas have been floated in Wyoming, Wisconsin and Missouri.”

Jon Ralston has a must-read obituary of Sen. Harry Reid:

“He just didn’t have time or the temperament for social niceties or for the self-editing mechanism most politicians have. But the caricature of Harry Reid – the former boxer who was not afraid to land a low blow, the ruthless tactician who would do anything to win, the charismatically challenged curmudgeon – is so one-dimensional.”

“All humans are complex, but some are more complex than others. Reid was as kind in private to people, important and not, as he was dismissive, even nasty to foes in public. He engendered – and still does even in death – deeper loyalty from his staffers and others than any pol I have encountered. And his six-decades-plus love affair with his wife, Landra, is one for the ages.”

Former President Barack Obama said in a statement that he wouldn’t be president were it not for the late Sen. Harry Reid’s “encouragement and support.”

He added in a letter to Reid shortly before his death: “I wouldn’t have got most of what I got done without your skill and determination.”

“If Harry said he would do something, he did it. If he gave you his word, you could bank on it. That’s how he got things done for the good of the country for decades.”  — President Biden, in a statement about the passing of Sen. Harry Reid.

Sen. Chris Coons (D-Del.): “Somebody said this to me: ‘When you meet Harry Reid, just remember, he was a prizefighter. And he wasn’t successful because he had the hardest punch. He wasn’t successful because he had the longest reach. He won match after match because he just never fell down.’ He would let the other boxer exhaust himself beating up on Harry, and then Harry would knock him out. That explained a lot to me about Harry Reid — his persistence, his determination, his ability to absorb a lot of pain and a lot of punishment, but still keep fighting.”

In a statement, Senate Minority Leader Mitch McConnell — who described their relationship as “cordial,” the senatorial term of art generally used when two politicians are not fond of each other — noted, “You could hardly invent a more quintessentially American story, and it took Harry’s legendary toughness, bluntness, and tenacity to make it happen.”

“Sometimes, in a quiet or difficult moment, Harry Reid would reach out,” Rep. Alexandria Ocasio-Cortez (D-N.Y.) wrote. “It was like he knew. His counsel, encouragement, kindness, and generosity was so deeply moving. It was sincere. And I will never forget it.”

Politico: “Chuck Schumer, now majority leader, was a close personal friend and protege of Reid’s, and their shared leadership of the Senate Democrats over the past 15 years has defined the caucus from top to bottom. For all their similarities and partnerships, the former boxer from small-town Searchlight, Nev., and the chatty pol from Brooklyn each developed their own view of how to run the fractious Democratic Caucus.”

“While Schumer leads the party with relentless messaging discipline and a focus on lockstep party unity, Reid favored all-out political combat. Sometimes Reid battled members of his own party, but he reveled in partisan bomb-throwing.”

Researchers in Tokyo are developing a “dream” Covid-19 vaccine that offers lifetime efficacy, in what would be a game-changer as the fight against the coronavirus drags on into its third year, the Japan Times reports.

“The CDC estimated that the Omicron variant now accounts for roughly 59% of all Covid cases in the United States, a significant decrease from the agency’s previous estimate,” the New York Times reports.

“The update shows how hard it is to track the fast-spreading variant in real time and how poorly the agency has communicated its uncertainty.”

“The lightning spread of the coronavirus’s omicron variant in the United States pushed the seven-day average of new daily cases to 253,245 as of Tuesday afternoon, surpassing the previous high of 248,209 cases on Jan. 12,” the Washington Post reports.

Eric Trump blamed Brexit in regulatory filings, saying it affected the resorts “as supply chains have been impacted by availability of drivers and staff, reducing deliveries and the availability of certain product lines.”

Former President Donald Trump has reached a confidential settlement with the PGA of America over the golf association’s decision earlier this year to pull a major professional tournament from a Trump-owned golf course, Reuters reports.

Oklahoma state Sen. Rob Standridge (R) has introduced a bill that would give any parent the power to ban books in school districts, the McAlester News-Capital reports.

Under the bill, if just one parent objects to a book it must be removed within 30 days. Parents can also collect at least $10,000 per day if the book is not removed as requested.

“China will set up a research base on the moon by around 2027, eight years earlier than previously scheduled,” the South China Morning Post reports.

“For years, China’s moon programme has progressed steadily and at its own pace, with Chinese space authorities saying repeatedly that they were not interested in a race like that during the US-Soviet Cold War.”

“But the thinking of Chinese policymakers might have changed because they felt threatened by a recent move by the United States.”

New Yorker: “The stakes extend well beyond Iran. The world’s nuclear order, already perilous, is now at risk of unravelling. Nuclear pacts hammered out in the last century are dated or fraying, as the U.S., Russia, and China modernize their arsenals. The Pentagon estimates that China could have at least a thousand bombs by 2030.”

“The talks with Tehran are designed to prevent a tenth nation—the latest was North Korea, in 2006—from getting the bomb.”

President Joe Biden will hold a call with Russian President Vladimir Putin on Thursday afternoon “to discuss a range of topics, including upcoming diplomatic engagements with Russia,” CNN reports.

The call was requested by Putin.

Financial Times: “After weeks of menacing words and behavior, there is no longer much doubt that Vladimir Putin is engaged in high-stakes blackmail. After massing forces close to Ukraine, the Kremlin has issued an ultimatum: that western countries acquiesce to what amounts to a rewriting of Europe’s post-cold war security order, on its terms.”

“Russia’s president is in effect negotiating with a gun to his neighbors head. He must be deterred from military action. Whether and how US president Joe Biden and European allies achieve that will have profound implications for European security and relations with powers such as China.”

“President Joe Biden insists that he strongly believes in the rights spelled out in the Roe v. Wade Supreme Court decision that are now under the most dire threat in decades,” the AP reports.

“But he barely even uses the word ‘abortion’ and when his administration has been asked about what it can do to protect reproductive rights, the response has mostly been that Congress must write the landmark court decision into law, a strategy that is highly likely to fail.”

“To women who rallied to Biden’s presidential campaign in no small part to protect the landmark 1973 court ruling, that’s not nearly enough.”

Vox: “In just four years as president, Trump remade the federal judiciary — all with a big assist from a Senate Republican leader willing to break any norm in order to ensure GOP control of the courts. Trump appointed a third of the Supreme Court and nearly a third of all active appeals court judges.”

“Nearly one year into Biden’s time in office, the result hasn’t exactly been a bloodbath for his policies — in contrast to the seemingly never-ending array of lawsuits seeking to repeal Obamacare, no federal judge has yet tried to repeal Biden’s major legislative accomplishments such as the American Rescue Plan or the Infrastructure Investment and Jobs Act.”

“But in two areas in particular, immigration and public health, the courts have been unusually aggressive.”

“President Biden is considering Sarah Bloom Raskin for a top role at the Federal Reserve as part of a slate of three nominees for central bank board seats,” the Wall Street Journal reports.

Daniel Lippman has the scoop on “an explosive whisper campaign that tried to sink” STEVEN BONDY’s appointment as U.S. ambassador to Bahrain. “This is one such story you’ve not read before. It features a decorated diplomat with an unblemished record, about to claim a career-defining prize: an ambassadorial posting to a key Middle East ally. It involves serious accusations and counter-accusations of racism, none of which were made publicly. Hidden not far beneath the surface are personal histories and policy disagreements — in this case between appointees of former President Donald Trump and the ‘Deep State’ bureaucracy that haven’t been put to bed with the advent of a new administration. To tell the tale properly, we need to go back three years and start in Abu Dhabi, the capital of the United Arab Emirates.”

Oklahoma Gov. Kevin Stitt (R) told The Oklahoman that he does not plan on getting a Covid-19 booster shot despite state health officials urging all eligible people to receive the additional vaccine dose.

Said Stitt: “I’m perfectly healthy, and my doctor hasn’t told me I need to get it.”