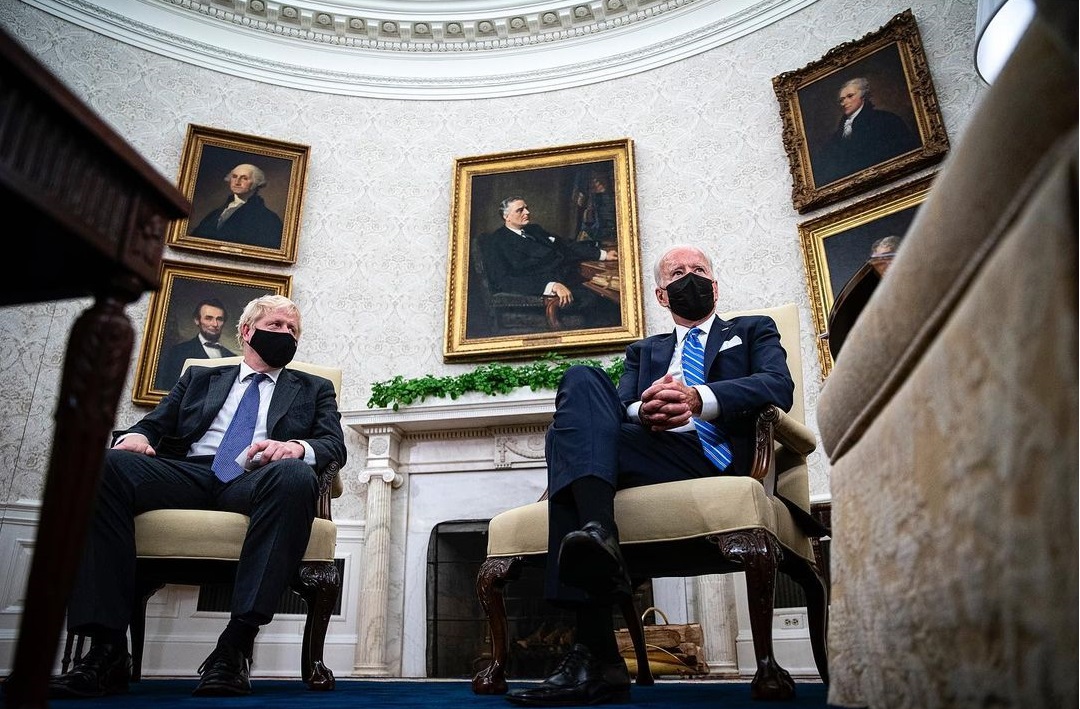 Slate: “As 2021 draws to a close, President Joe Biden has good reason to be frustrated. His legislative agenda is stymied in the Senate. His executive authority is under assault from Donald Trump’s judges. His administration was blindsided, again, by a spiraling COVID surge, this time with omicron.”

“But there is one front on which Biden has a near-perfect score: judicial nominations. Over the past year, the White House has put forth slate after slate of diverse, well-qualified, progressive nominees—and the Senate has swiftly confirmed them. Biden’s breakneck pace, combined with his choice of nontraditional judges, has shattered too many records to count. No, the president has not loosened Donald Trump’s stranglehold on the Supreme Court. But his transformation of the lower courts will still have a profound impact on American law for decades to come.”

— Donald Trump, Jr., quoted by The Atlantic, rejecting a central teaching of Christianity.

Dr. Anthony Fauci told MSNBC there should be a vaccination requirement for air travel.

Said Fauci: “When you make vaccination a requirement, that’s another incentive to get more people vaccinated. If you want to do that with domestic flights, I think that’s something that seriously should be considered.”

More than 6,000 flights worldwide have been cancelled over the three-day Christmas weekend as airlines continue to contend with surging cases of the Omicron variant and staff shortages, CNN reports.  Roughly 1,700 of these flights were within, into or out of the U.S.

President Biden “pledged to support governors struggling with the omicron variant of Covid-19,  but acknowledged the states will need to take the lead in controlling the pandemic,” CNBC reports.

Said Biden: “There is no federal solution. This gets solved at a state level.”

“Israel has begun trials of a fourth dose of coronavirus vaccine in what is believed to be the first study of its kind,” the AP reports.

CNN: “Trump’s campaign of obstruction, which has now reached the Supreme Court, raises questions about whether the panel, already facing a racing clock ahead of next year’s midterms, will fulfill its goal of a historic accounting of his efforts to overturn the election. Trump’s inner circle is locked into a strategy of preventing a comprehensive reckoning over one of the most notorious days ever in the United States and seeking to whitewash history as he readies an apparent new run for the White House.”

“The panel’s attempt to reach deep into Trump world and behind the scenes in the West Wing on January 6 kicked into higher gear in the days before Christmas, offering new insight into its areas of focus. Trump responded by stepping up his own strategy of defying the truth.”

“It is now clear committee members are trying to build a detailed picture of exactly what Trump said, did and thought in the days leading up to the insurrection and in the hours when it raged on Capitol Hill after he incited the mob with fresh election fraud lies.”

“People oftentimes forget that, like, how old Trump is. He comes from a generation — I’ve seen other people that are older have the exact same perspective, like, they came from a time before TV, before internet, before being able to conduct their independent research.”  — Conservative commentator Candice Owens, pushing back on Donald Trump’s recent embrace of the coronavirus vaccine.

Washington Post: “Coronavirus cases are being reported at record levels across the world — surpassing even last winter’s devastating peak in some places — as officials grapple with a surge caused by the omicron variant. France recorded more than 104,000 new cases Saturday, reaching a six-figure daily tally for the first time. Britain, Italy, Ireland and the Australian state of New South Wales also reported record high levels of new cases over the weekend.”

“In the United States, the seven-day average of new daily cases was more than 203,000 on Sunday, according to a Washington Post tally, a level not seen since Jan. 19 last year. U.S. health officials warn that the country could soon see more than 1 million new cases per day, far beyond last winter’s peak of 248,000.”

New York Times: “Delaware, Hawaii, Massachusetts, New Jersey, New York and Puerto Rico are among the areas that have reported more coronavirus cases in the past week than in any other seven-day period.”

“Congressman Bennie Thompson, the chairman of the House select committee investigating the Capitol attack, has said the panel will open an inquiry into Donald Trump’s phone call seeking to stop Joe Biden’s certification from taking place on 6 January hours before the insurrection,” The Guardian reports.

“The chairman said the select committee intended to scrutinize the phone call – revealed last month by the Guardian – should they prevail in their legal effort to obtain Trump White House records over the former president’s objections of executive privilege.”

Donald Trump’s Scottish golf courses claimed $4million in Covid-relief furlough payouts from the U.K. Government while he was president, The Independent reports.

The payments were detailed in newly released accounts filed with the U.K. by Golf Recreation Scotland Ltd., the holding company that owns both golf courses.

“The Taliban dissolved Afghanistan’s two election commissions as well as the state ministries for peace and parliamentarian affairs,” the AP reports.  A spokesman called them “unnecessary institutes for the current situation in Afghanistan.”

It is amazing how much the GOP and Taliban agenda’s sync up.

The wife of conspiracy theorist Alex Jones was arrested Christmas Eve on a domestic violence charge that the right-wing provocateur said stems from a “medication imbalance,” the AP reports.

Hey, I might be driven to violence if I had to live with that man.