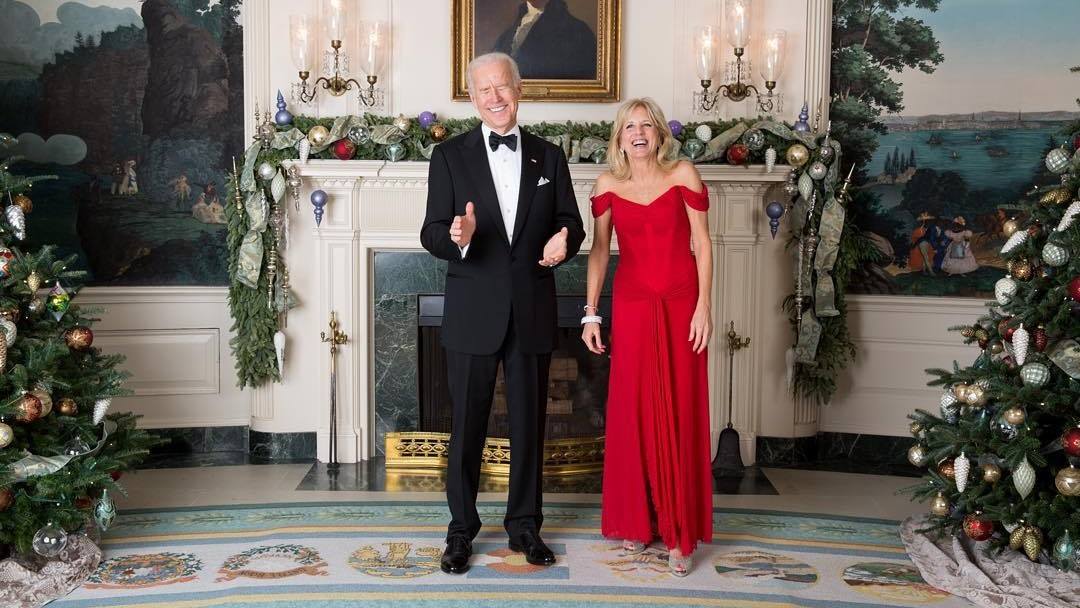 “Sen. Joe Manchin (D-WV) told the White House last week that he would support some version of a tax targeting billionaire wealth as part of President Biden’s Build Back Better economic agenda,” the Washington Post reports.

“Despite its endorsement from the most conservative Democrat, the tax on billionaires still faces long odds to approval as part of the final legislation, as it has been greeted skeptically by other Democratic lawmakers in both the House and Senate. It was also left out of the House Democrats’ version of Build Back Better after Manchin publicly criticized it in October.”

Politico: Manchin is not the only big hurdle left for Biden’s megabill.

New York Times: “Now, health experts say the roughly 15 percent of the adult population that remains stubbornly unvaccinated is at the greatest risk of severe illness and death from the Omicron variant, and could overwhelm hospitals that are already brimming with Covid patients.”

President Biden got a visit from a Christmas troll Friday when a father participating in the annual White House NORAD Santa-tracking call used the phrase “Let’s Go Brandon,” the slangy stand-in for “Fuck Joe Biden,” the New York Post reports. So you, as a father, tell a kind old man who just wished your child a Merry Christmas to go fuck himself. Hillary was right. These people are deplorabe.

“It’s longstanding tradition for first ladies to visit Children’s National Hospital at Christmastime, but Joe Biden’s visit on Friday was a surprise. It marked the first time that a sitting president had joined the fun.”

“U.S. airlines scrapped nearly 1,000 flights on Saturday, the second straight day of massive cancellations as surging COVID-19 infections have sidelined some pilots and other crew members, upending plans for tens of thousands of holiday travelers over the Christmas weekend,” Reuters reports.

“United Airlines preemptively canceled more than a hundred flights scheduled for Friday… The airline’s statement acknowledged that the ‘nationwide spike in Omicron cases’ had directly impacted its flight crews and forced 112 cancellations,” the Daily Beast reports.

“Roughly an hour later, it emerged that Delta Airlines had pulled the plug on roughly 85 of its own Friday flights.”

CNBC: “Airlines have ramped up pressure on the CDC to lower the quarantine recommendation for breakthrough Covid cases.”

Washington Post: “Now, nearly a full year into Biden’s term, as the virus has mutated its way through the Greek alphabet to the omicron variant, testing is in short supply in many places, leaving frustrated Americans waiting in long lines for tests — if they can get them at all.”

“That is feeding into a wave of concern, despondency and in some places near-frenzy at the likely approach of yet another spike in a pandemic the country has battled for nearly two years. This late-December disarray — crowded testing sites, empty drugstore shelves — is raising fresh questions about how Biden and his team have executed on his pledge to defeat the pandemic.”

“The fringe factions of the right-wing have erupted in anger and confusion at former President Donald Trump’s enthusiastic lauding of the COVID-19 vaccine this week,” Insider reports.

“On two separate occasions, Trump advocated for people to take the COVID-19 vaccine this past week.”

“This is an emergency Christmas Day warning to President Trump. You are either completely ignorant… or you are one of the most evil men who ever lived… What you told Candace Owens is nothing but a raft of dirty lies.”— Alex Jones, pushing back on former President Trump’s claim that the coronavirus vaccines work.

With omicron cases spreading like wildfire, the White House is finally taking steps to make free antigen tests available to all. But in October, it dismissed a bold plan to ramp up rapid testing ahead of the holidays, Vanity Fair reports.

“The 10-page plan, which Vanity Fair has obtained, would enable the U.S. to finally do what many other countries had already done: Put rapid at-home COVID-19 testing into the hands of average citizens, allowing them to screen themselves in real time and thereby help reduce transmission. The plan called for an estimated 732 million tests per month, a number that would require a major ramp-up of manufacturing capacity.”

Wall Street Journal: “Biden administration officials have sometimes expressed frustration with what they see as developments largely out of their control, from Democrats’ narrow majority in the Senate to the rise of the Omicron variant. Much of that frustration is directed outward—at the media, at Republicans and at other outside critics who some in the administration believe are eager to see Mr. Biden fail, according to the president’s allies.”

“Mr. Biden, for his part, has expressed annoyance both in public and in private with the way the media covers him, aides said.”

“America’s third year of dealing with the pandemic is likely to start as bleak as ever, with a devastating Omicron surge for the first couple of months,” Axios reports.

“Experts are hopeful that once the wave of cases, hospitalizations and deaths caused by the Omicron variant ebbs, life will finally be able to more closely resemble normal.”

“The silver lining of a tough January and February is that most of the country could have some degree of immunity afterwards — either through vaccination, infection, or both — that helps protect them against severe COVID infections in the future.”

“The U.S. and Russia moved closer to convening talks over tensions surrounding Ukraine, though American officials warned that Moscow is continuing to build up its forces for possible military action against its neighbor,” the Wall Street Journal reports.

“Russian President Vladimir Putin said Thursday that U.S. and Russian officials would meet in January in Geneva. The U.S. has also proposed talks, and the two sides are still trying to sort out differences over how to structure the negotiations and which channels to use, U.S. officials said.”

“Signs are mounting that the U.S. economy is losing some steam as the Omicron variant of the Covid-19 virus spreads rapidly through parts of the country,” the Wall Street Journal reports.

“The number of diners seated at restaurants nationwide was down 15% in the week ended Dec. 22 from the same period in 2019, a steeper decline than in late November… U.S. hotel occupancy was at 53.8% for the week ended Dec. 18, slightly below the previous week’s level.”

Washington Post: “A small, effervescent man with a crooked nose and infectious toothy grin, Archbishop Tutu served as Black South Africa’s informal ambassador to the world during the dark days of repression and as a crucial voice in the campaign for racial equality that culminated with Nelson Mandela’s election as the country’s first Black president in 1994.”

“The House committee investigating the Jan. 6 attack on the Capitol is focusing intently on Donald Trump’s actions that day as it begins to discuss whether to recommend that the Justice Department open a criminal investigation into the former president,” the Washington Post reports.

“Committee Chairman Bennie Thompson (D-MS) said in an interview that of particular interest is why it took so long for him to call on his supporters to stand down, an area of inquiry that includes obtaining several versions of a video Trump reportedly recorded before finally releasing a message 187 minutes after he told his supporters to march on the Capitol during the rally that preceded the attack.”

Said Thompson: “It appears that he tried to do a taping several times, but he wouldn’t say the right thing.”

William Hanage: “Time and again throughout this pandemic, TV talking heads, politicians and many others have gotten tripped up on the simple and immutable fact that hospitalizations lag infection. It can take weeks for an infection to progress to the point where the patient needs to be hospitalized. Omicron burst onto the scene only four weeks ago. Not enough time has passed for us to have a firm grip on disease severity.”

“Again that’s because of math: When a variant spreads extremely rapidly, as omicron seems to do, it can send false signals of reassurance on disease severity.”

Wall Street Journal: “American consumers spent at a brisk pace over the shopping season, as an early rush to stores amid worries about supply and delivery problems muted the effects of a Covid-19 surge that disrupted some businesses and crimped spending before Christmas.”

“Taylor Budowich, a spokesman for former President Donald Trump, is fighting a subpoena sent by the House Jan. 6 Committee to JPMorgan Chase for his banking records, arguing in a court filing that he’s being denied due process in the matter after providing hundreds of pages of documents and hours of sworn testimony,” Fox News reports.

Laurence Tribe et al. try to crank up the pressure on Attorney General Merrick Garland with a NYT op-ed: “Will Donald Trump Get Away With Inciting an Insurrection?”

Renato Mariotti argues: “The Bar for Charging Trump with Obstructing Congress Is Higher Than Many Realize“

“The Manhattan district attorney, Cyrus Vance Jr., has run out of time,” the New York Times reports.  “Even as prosecutors in his office have ramped up their long-running investigation into former President Donald Trump in recent weeks, Mr. Vance is set to leave office soon without seeking criminal charges against Mr. Trump.”

Scientific American: “The relief was as deep as the stakes were high. At 7:20 A.M. (ET), the rocket carrying the largest, most ambitious space telescope in history cleared the launchpad in French Guiana, and the members of mission control at the Space Telescope Science Institute in Baltimore roared their elation.”

“The suspense was not quite over. Half an hour postlaunch, the telescope still needed to decouple from its host rocket, after which had to deploy solar panels to partly power its journey. Only after that first deployment proved successful, said a NASA spokesperson in a statement to Scientific American, would ‘we know we have a mission.’ When the announcement of a successful rocket separation and solar-array deployment finally came, it was almost drowned out by cheers.”