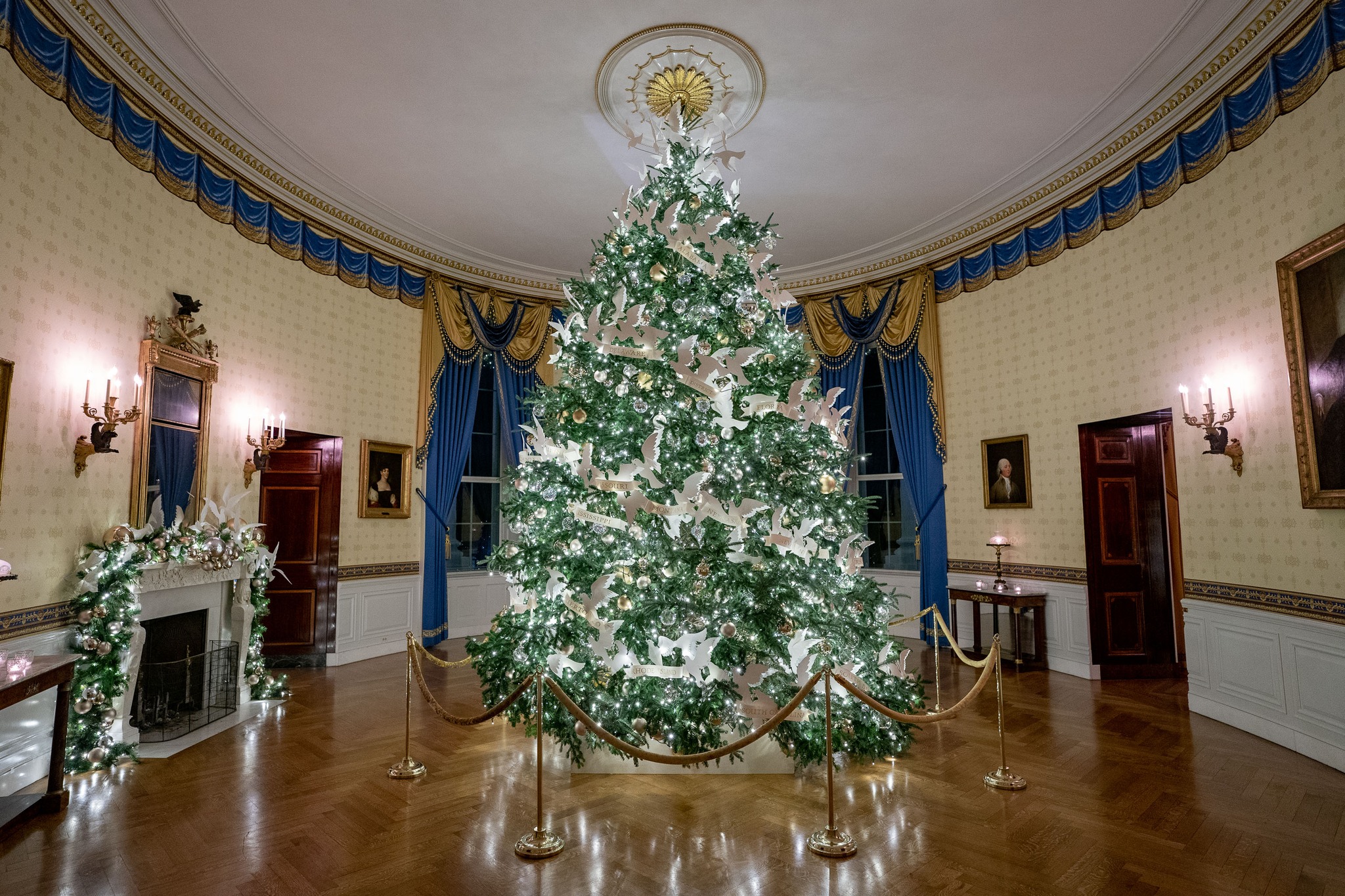 David Frum: “Relative to its strength in Congress, the Biden administration has proved outstandingly successful. In 11 months, Biden has done more with 50 Democratic senators than Barack Obama did with 57.”

“He signed a $1.9 trillion COVID-relief bill in March 2021: $1,400-per-person direct payments, $350 billion in aid to state and local governments, an extension of supplemental unemployment-insurance benefits and subsidies under the Affordable Care Act. He signed a $1 trillion infrastructure bill in November. He signed some 75 executive orders, many of them advancing liberal immigration goals. He’s also won confirmation for some 40 federal judges, more than any first-year president since Ronald Reagan, and twice as many as Donald Trump confirmed in his first year with a 54-vote Senate majority.”

President Biden told ABC News that he plans to run for reelection in 2024, assuming he’s still in good health.  Said Biden: “I’m a great respecter of fate. Fate has intervened in my life many, many times. If I’m in the health I’m in now, if I’m in good health, then in fact, I would run again.”  He added that if his predecessor, Donald Trump, runs, then it would “increase the prospect” even more.

New York Times: “The warnings started to stream in early this fall: Shop early or you may not get your gifts on time.”

“Global supply chain problems that have led to long delays in manufacturing and shipping could ripple outward, slowing package deliveries to millions of Americans in the weeks and days before Christmas, experts warned. The prospect even became a talking point in conservative attacks on President Biden’s policies.”

“Despite early fears, however, holiday shoppers have received their gifts mostly on time.”

“The House select committee investigating the deadly Capitol riot said Wednesday it has asked for a meeting with Republican Rep. Jim Jordan to discuss his communications with then-President Donald Trump on Jan. 6,” CNBC reports.  The letter reminds Jordan that he has previously said publicly he has “nothing to hide.”

“As federal prosecutors increasingly use an obscure criminal charge to jail Jan. 6 insurrectionists, congressional investigators seem to be building a case that could result in that same charge against former President Donald Trump,” the Daily Beast reports.

“A third of the 700 people arrested by the Justice Department for attacking the U.S. Capitol building have been hit with a peculiar federal ‘witness tampering’ law… Those 240 insurrectionists have been charged with corruptly obstructing an official proceeding, a never-before-seen tactic by prosecutors for an equally unprecedented event.”

There’s an important new analysis by Just Security of the complicated set of dynamics in play around the delayed decision to deploy the National Guard to the Capitol on Jan. 6.

Ryan Goodman and Justin Hendrix carefully parse news reports and last month’s report from the Pentagon inspector general to firm up a working theory that senior Defense officials were hyper-concerned that President Trump would hijack a military deployment and use it to remain in power.

“Close observers of the events of Jan. 6 have mainly posited two reasons for the delay in mobilizing the Guard. The first explanation is one of bureaucratic failures or managerial weaknesses in the military’s procedures that day. A second explanation is that the military was deliberately serving Trump’s effort to interfere with the election by withholding assistance.

We identify a third explanation: that senior military officials constrained the mobilization and deployment of the National Guard to avoid injecting federal troops that could have been re-missioned by the President to advance his attempt to hold onto power.”

This doesn’t mean there wasn’t a breakdown in the chain of command, and a threat to the constitutional order. But it’s a very different kind of breakdown from the crisis much of the press coverage has been premised on: The military holding back so the rioters would win.

‘“I don’t think it’s a failure. I think it’s — you could argue that we should have known a year ago, six months ago, two months ago, a month ago… I wish I had thought about ordering 500 million at-home tests two months ago.”  — President Biden, in an ABC News interview, on why Covid tests are not readily available.

New York Times: “Biden’s administration has not yet signed a contract to buy the tests, and the website to order them will not be up until January. Officials have not said how many tests people will be able to order or how quickly they will be shipped once they begin to be available next month. Manufacturers say they are already producing tests as fast as they can.”

In addition to Omicron raging across the United States, the first week of January will feature:

The Supreme Court is coming back early from its holiday break to hear oral arguments. There’s some speculation that the court is scheduling oral arguments to blunt recent criticism it’s faced for excessive use of the so-called “shadow docket.”

Both sets of cases had been on what critics call the court’s shadow docket, in which the court decides emergency applications, sometimes on matters of great consequence, without full briefing and argument. The court’s decision to hear arguments on the applications may have been a response to mounting criticism of that practice.

The fear is that the court’s 6-3 conservative majority will use the COVID mandates cases to rein in executive power (at least for now, while a Democrat occupies the White House) but do so in ways that will have broader consequences for federalism, First Amendment rights, and other new frontiers in constitutional interpretation. That’s, of course, in addition to exacerbating the pandemic.

“Russia continues to build up forces close to Ukraine even as it’s preparing for security talks with the U.S., keeping up pressure with a deployment that could turn into a rapid invasion or a long-term threat,” Bloomberg reports.

Washington Post: “Putin is expected to outline why the Kremlin considers Ukraine’s Westward turn an urgent security threat during his annual news conference today, which marks an opportunity for Putin to convince skeptical citizens that the situation on the border may require military action.”

“Bribes to government officials who oversee the awarding of state contracts in Russia are equivalent to roughly one third of the country’s entire national budget revenue,” the Times of London reports.

“Lawyers for former president Donald Trump asked the Supreme Court on Thursday to block release of his White House records to a congressional committee investigating the Jan. 6 attack on the U.S. Capitol,” the Washington Post reports.

“Trump wants the justices to reverse a unanimous ruling from the U.S. Court of Appeals for the D.C. Circuit, which rejected his assertions of executive privilege and request to keep secret roughly 800 pages of Trump’s papers. President Biden determined the material could be released to the committee.”

Said Trump: “Oh no, the vaccines work, but some people aren’t the ones. The ones who get very sick and go to the hospital are the ones that don’t take the vaccine. But it’s still their choice. And if you take the vaccine, you’re protected.”

He added: “Look, the results of the vaccine are very good, and if you do get it, it’s a very minor form. People aren’t dying when they take the vaccine.”

An Axios-Ipsos poll finds anvaccinated Americans’ already low trust in the federal government plummeted over the course of 2021, exacerbating the challenges in getting the pandemic under control.

Said pollster Chris Jackson: “The people who remain unvaccinated have almost no trust in the government. It doesn’t really matter what Biden says. They don’t believe anything you’re saying.”

“Roger Stone, a longtime associate of Donald Trump, is auctioning off a copy of a 1990s magazine cover he says is signed by the former president as part of a larger fundraising campaign to pay for his legal defenses and medical bills,” Politico reports.

“If the bid exceeds $20,000 dollars, the bidder gets the physical version of the magazine along with ‘one of only one’ digital copy, which Stone marketed as an NFT, or a non-fungible token.”

Vice President Kamala Harris got angry during an interview with Charlamagne Tha God, blasting the host’s question on whether Joe Biden or Sen. Joe Manchin (D-WV) is “the real president.”

Said Harris: “It’s Joe Biden—and don’t start talking like a Republican about asking whether or not he’s president. It’s Joe Biden. And I’m vice president, and my name is Kamala Harris.”

Vice President Kamala Harris tested negative for Covid-19 on Wednesday after she was possibly exposed to Covid-19 on Tuesday, USA Today reports.

Police said that Illinois state Sen. Kimberly Lightford (D) was the victim of a carjacking in a Chicago suburb, WMAQ reports.

“A Biden administration effort to reunite children and parents who were separated under President Donald Trump’s zero-tolerance border policy has made increasing progress as it nears the end of its first year,” the AP reports.

“The Department of Homeland Security planned Thursday to announce that 100 children, mostly from Central America, are back with their families and about 350 more reunifications are in process after it adopted measures to enhance the program.”

“I think you should home school. I was home schooled all the way through. I am proudly a college dropout. Unless you are becoming a doctor or lawyer or engineer, I highly encourage you to drop out.”  — Rep. Madison Cawthorn (R-NC), speaking to an audience of mostly college students.

Rep. Madison Cawthorn (R-NC) and his wife are divorcing, the North Carolina Republican announced in a statement, citing irreconcilable differences, NBC News reports.  They were just married in April.

“US intelligence agencies have assessed that Saudi Arabia is now actively manufacturing its own ballistic missiles with the help of China,” CNN reports.  It’s a development “that could have significant ripple effects across the Middle East and complicate the Biden administration’s efforts to restrain the nuclear ambitions of Iran, the Saudis’ top regional rival.”

China has warned that the “resurgence of international militant groups emboldened by the chaos in post-war Afghanistan is posing serious threats to anti-terror work,” the South China Morning Post reports.

“The Taliban have halted all flights of Afghan evacuees for the past two weeks in a dispute about how the airport in Kabul is run and who is allowed on the evacuation flights,” NBC News reports.