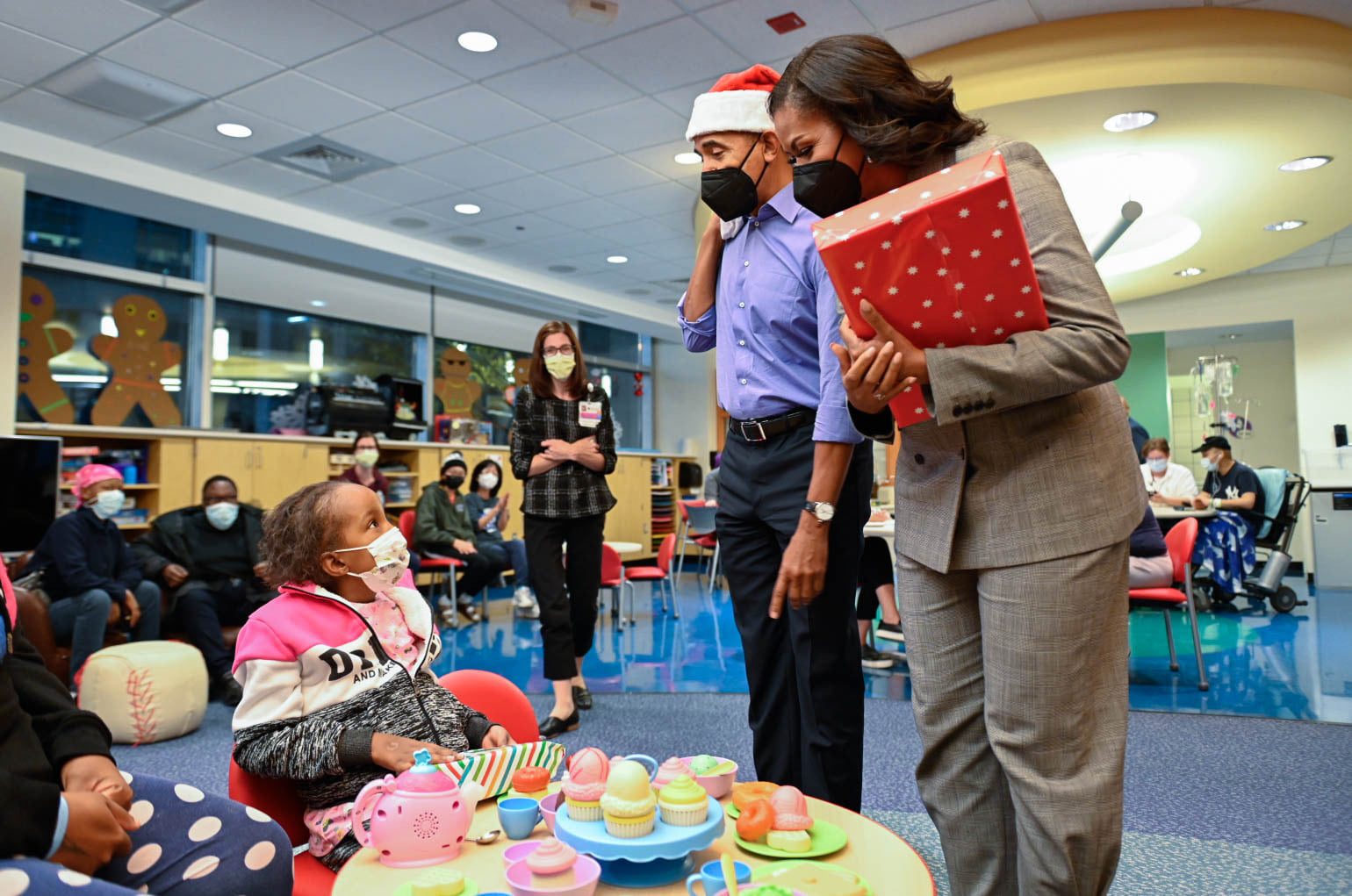 “Sen. Joe Manchin (D-WV) and President Joe Biden spoke Sunday night after a major blowup in negotiations around the president’s domestic agenda,” Politico reports.   “The conversation ended with a sense that negotiations would, in fact, resume around the Build Back Better Act in some form in the new year.”

Punchbowl News: “Senate Democrats are holding a special party conference call tonight at 8 p.m. Sen. Joe Manchin (D-WV) isn’t sure if he’s going to participate, a source familiar with the situation tells us. This is especially noteworthy because Manchin’s declared opposition to the Build Back Better Act – and the fallout that’s provoked – is why Senate Democrats are having the call in the first place.”

“If he doesn’t join the call, it’s just another example of how far afield Manchin is from the Democratic Party on Capitol Hill at the moment.”

Playbook: “We talked to three Democratic senators Monday night and none of them thought there was a clear path forward yet. They are awaiting better guidance after tonight’s call.”

The House Jan. 6 select committee’s investigation could lead to sending a criminal referral against Trump to the Justice Department for obstructing Congress when he tried to stop the 2020 election results from getting certified, according to the New York Times.

“When the House formed a special committee this summer to investigate the Jan. 6 Capitol assault, its stated goal was to compile the most authoritative account of what occurred and make recommendations to ensure it never happens again,” the New York Times reports.

“But as investigators sifted through troves of documents, metadata and interview transcripts, they started considering whether the inquiry could yield something potentially more consequential: evidence of criminal conduct by President Donald Trump or others that they could send to the Justice Department urging an investigation.”

“The House Select Committee investigating the insurrection at the U.S. Capitol on Jan. 6 sent a letter on Monday to Rep. Scott Perry (R-PA) requesting he provide information that could be crucial to the panel’s examination of efforts to overturn the election,” the Washington Post reports.

Chairman Bennie Thompson (D-MS) added: “We also have evidence indicating that in that time frame you sent communications to the former Chief of Staff using the encrypted Signal app.”

New York Times: “To date, the panel has been reluctant to issue subpoenas for information from sitting members of Congress, citing the deference and respect lawmakers in the chamber are supposed to show one another.”

The omicron variant now makes up a majority of COVID-19 cases in the United States, at 73.2% of all reported cases, Axios reports.

New York Times: “The estimates underscored the rapid spread of the new variant. Two weeks ago, the CDC said Omicron accounted for just 1% of U.S. cases; a week ago, it was about 13%.”

“Delta, which for months had been the dominant form of the virus, accounted for about 26% of new cases over the last week.”

“It’s going to be a surge like we haven’t seen before, numbers that are completely out of control.”  —Former Biden pandemic adviser Andy Slavitt, on MSNBC, on the Omicron variant.

President Joe Biden came in close contact on Air Force One with a staff member who tested positive for COVID-19, the Washington Examiner reports.

Maryland Gov. Larry Hogan (R), a cancer survivor, announced yesterday that he got a positive result during his regular COVID-19 testing routine but is “feeling fine.”

“Four days before Christmas, as coronavirus cases spike and testing lines snake around city blocks, President Biden on Tuesday will again attempt to persuade Americans to take protections to fend off the fast-spreading omicron variant,” the Washington Post reports.

“But at a moment of great urgency — both for the nation’s health and the president’s standing — he has few new tools at his disposal, at least not politically palatable ones, and public health experts fear that exhausted Americans have tuned out their warnings.”

Biden’s speech focused on expanding access to free testing by delivering rapid tests to people’s homes, which will begin in January, and by putting up new federal testing sites around the country, starting in New York City, and on offering extra relief to overrun hospitals by activating FEMA response teams to give them extra staffing and increase hospital bed capacity.

“Fox Corporation, the owner of Fox News, told employees on Friday that those working in New York City would have to show proof they’d had at least one dose of the Covid vaccine by Dec. 27, removing the option to get tested weekly instead,” the New York Times reports.

“Former President Donald Trump said he would hold a news conference on Jan. 6, one year after the deadly riots at the U.S. Capitol which the Republican ex-president has been accused of fomenting,” Reuters reports.

Said Trump, in a statement: “Why isn’t the Unselect Committee of highly partisan political hacks investigating the CAUSE of the Jan 6th protest, which was the rigged Presidential Election?”

Said McConnell: “I was shocked at the vitriol. And basically it seemed to me that they were calling Sen. Manchin a liar. I think that was not smart. This is a 50/50 Senate. It’s going to be 50/50 for another year, and believe me, this is not how I would handle a disappointing vote like that.”

He added: “He doesn’t fit well over there, but that is a decision ultimately that he has to make. We certainly welcome him to join us if he was so inclined.”

Jonathan Bernstein: “As for Manchin, there’s a lot of nonsense out there about him not really being a Democrat. I have my criticisms of the FiveThirtyEight data on presidential support, but the basics are clear: Manchin votes with other Democrats, and with Biden’s position, all the time. And there’s a significant gap between the most conservative Democrat and the most liberal Republican.”

“With a Republican in Manchin’s seat, even in the unlikely event that the replacement was a moderate, Democrats would not have passed their major Covid-relief bill earlier in the year, and would have no chance for even a slimmed-down version of Build Back Better. Of course, if Manchin’s seat was held by a Republican, Mitch McConnell would be the Senate majority leader, and Democratic legislation — along with most judicial and executive-branch nominations — wouldn’t get to the floor for a vote anyway.”

The State Department advised Americans not to travel to Ukraine due to Russia’s planning for “significant military action against Ukraine.”

New York Times: “The United States and Britain have quietly dispatched cyberwarfare experts to Ukraine in hopes of better preparing the country to confront what they think may be the next move by President Vladimir V. Putin of Russia as he again menaces the former Soviet republic: Not an invasion with the 175,000 troops he is massing on the border, but cyberattacks that take down the electric grid, the banking system, and other critical components of Ukraine’s economy and government.”

“Russia’s national ice hockey team sparked outrage in northern Europe by wearing throwback jerseys from its Soviet past during an overtime loss to Finland Sunday, amid rising tensions between the Kremlin and the West,” Bloomberg  reports.

A new Ipsos Moro poll in Britain finds 60% of adults think it likely that Boris Johnson will not be prime minister by the end of 2022.

Axios: “Johnson has faced relentless headlines since early November about ‘sleaze’ in his party ranks (he moved to change ethics rules in an ill-fated attempt to save scandal-tainted Brexiteer Member of Parliament Owen Paterson) and his own home (he used an undeclared donation to refurbish 10 Downing Street).”

“He’s faced brutal press coverage for matters trivial (the bizarre speech in which he lost his place and rambled about Peppa Pig) and substantial (the resignation of Brexit Minister David Frost over the direction of Johnson’s government).”

“We are closer to civil war than any of us would like to believe.” — Barbara Walter, in her forthcoming book, How Civil Wars Start.

North Korea banned laughing for 11 days during national mourning for the 10th anniversary of Kim Jong-il’s death, The Guardian reports.

Southwest Chief Executive Gary Kelly tested positive for Covid-19 after appearing at a U.S. Senate hearing on Wednesday, Reuters reports.  Kelly drew attention at the hearing for questioning the health benefits of masks on airplanes.