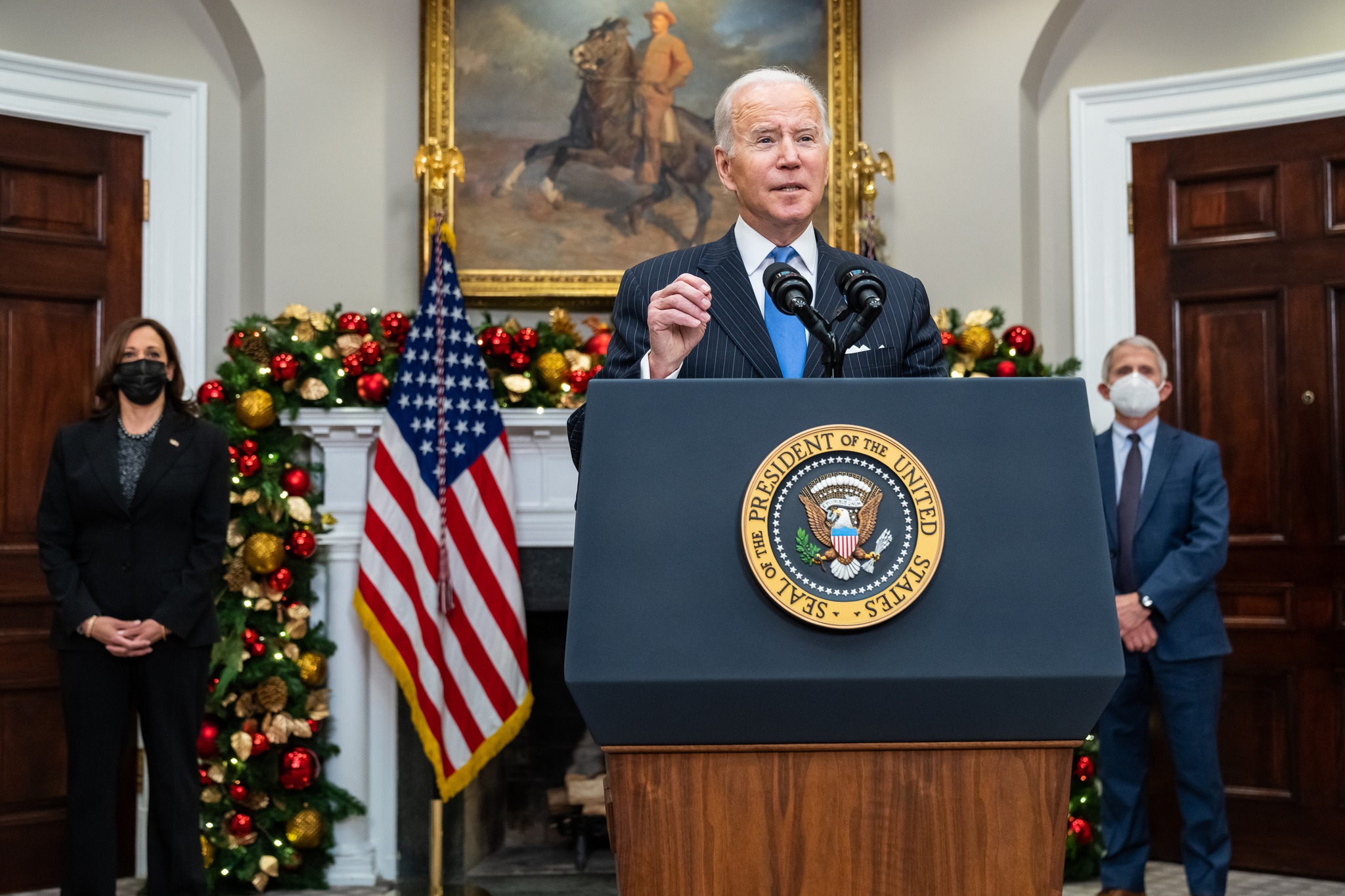 Dan Pfeiffer: “The most important thing Democrats must recognize is that America is a center-left country with a center-right political system. Joe Biden won the popular vote by more than seven million votes, but almost lost because the Electoral College structurally favors Republicans. In order to win the presidency, a Democrat must win over voters more conservative than the median American. Turning out our base is necessary, but not sufficient to capture the White House.”

“Biden’s agenda is broadly popular according to every poll but goes nowhere because the Senate gives disproportionate power to sparsely populated, very Republican, rural states. According to calculations by Daily Kos, even though the Senate is tied, the 50 Democratic senators represent 56.5% of the U.S. population while the 50 GOPers only represent 43.5%.”

“The problem for Biden and the Democrats is structural, not strategic. There is no message, slogan, or speech to solve the problem because the system is set up to dilute the power of the majority.”

“Chileans on Sunday elected Gabriel Boric as their next president, entrusting the young leftist lawmaker with helping to shape the future of a nation that has been roiled by protests and is now drafting a new Constitution,” the New York Times reports.

“As President Joe Biden heads into the end of the year, he’s facing a sour reality: The number of Americans who approve of his performance has hit a new low. Just 41% of Americans approve of the job he has been doing as president,” according to a new PBS NewsHour/NPR/Marist poll.

“Support among independents alone dropped eight points in a week.”

“Overall, more than half – 55% – of Americans disapprove of Biden’s performance, including 44% who strongly disapprove. His disapproval ratings have jumped 20 points since he took office, reaching a record high this month.”

“Murphy is the 22nd incumbent House Democrat to forgo a reelection bid next year.”

NEW JERSEY EIGHTH CD. Rep. Albio Sires (D-NJ) will not seek re-election in 2022 and Robert J. Menendez, the son of the senior U.S. Senator from New Jersey, has emerged as the front runner to succeed him, the New Jersey Globe reports.

“Chatter about the 2024 presidential primary calendar dominated sidebar conversations at the Democratic National Committee’s winter meeting this weekend, as Democratic officials contend with the possibility that President Joe Biden might not run for re-election,” Insider reports.

Said one state party chair: “Yes, Biden has obviously made it clear that he is running again, but nobody really knows that for sure… I just think the DNC is going to prepare for all scenarios.”

IOWA GOVERNOR. EMILY’s List has endorsed Deidre DeJear, who was the 2018 Democratic nominee for secretary of state.

ILLINOIS GOVERNOR. Multiple media outlets reported Thursday that billionaire Ken Griffin, who is the wealthiest person in Illinois and one of the wealthiest in the country, is willing to spend at least $150 million to defeat Democratic Gov. J.B. Pritzker if Republicans nominate his preferred slate in the June primaries. Those sources say that Aurora Mayor Richard Irvin is the potential gubernatorial candidate that Griffin is most focused on, though they told the Chicago Tribune’s Rick Pearson that nothing has been finalized; they also add that Griffin so far hasn’t even met with Irvin.

A spokesperson for Irvin, whose 2017 win made him the first Black leader of the state’s second-largest city, unequivocally said back in October that there was “no way” the mayor would run against Pritzker. However, while Irvin’s team reiterated his lack of interest on Tuesday, they notably didn’t comment about Pearson’s report. When Irvin himself was asked Thursday about his plans he merely replied, “I am honored and flattered that people are considering me in that light, but right now I’m doing the work for the city of Aurora,” which is not a no.

Griffin, for his part, denied that he’s picked a candidate, though he made it clear he wanted to see Pritzker gone. However, one GOP source who spoke to Griffin’s people told the Chicago Sun-Times’ Rachel Hinton that regarding Irvin, “They’ve been after him for awhile, and [Irvin’s] been going back and forth. But there’s no doubt that he’s the christened choice.”

Not everyone, though, is happy with Griffin’s machinations. One person identified only as a “prominent Republican” told Pearson, “These Griffin people behind the curtain, we don’t know. Is it like the Wizard of Oz?” They added, “I’m not saying they don’t have any credibility, but it’s a little bold to say to the Republican State Central Committee, ‘OK boys and girls, line up. This is what we’re going to do.”

The GOP primary already includes venture capitalist Jesse Sullivan, who has his own wealthy backers; state Rep. Darren Bailey; businessman Gary Rabine; and former state Sen. Paul Schimpf, and they’d each have plenty of material to attack Irvin over if he also got in. The mayor voted in the 2014, 2016, and 2020 Democratic primaries, though he did cast a ballot in the 2018 Republican contest.

Pearson also writes that Irvin “supports immigrant rights, and implementing sanctuary city-style policies with law enforcement for immigrants who lack legal status.” Irvin also proclaimed a day of honor to acknowledge Ngozi Ezike, the state director of public health who has implemented many of the measures to curb the pandemic that the GOP base utterly despises. Perhaps most notably, Irvin’s associates relay that he’s told them he’s pro-choice, though his advisor denies this.

Meanwhile, a different Republican billionaire is showing a small bit of interest in getting into the race himself. While Chicago Cubs co-owner Todd Ricketts reportedly said no to running last month, a spokesman now says that “Ricketts has no current plans to run for governor,” which Crain’s Chicago Business correctly interprets as not ruling anything out. Illinois’ filing deadline isn’t until March, but serious candidates always start collecting signatures well before then in a state where petition challenges are a way of life.

NEBRASKA GOVERNOR. While the local media reported early this year that Mike Hilgers, who serves as speaker of the unicameral legislature, was considering seeking the Republican nod for governor, Hilgers said Wednesday that he would compete in the open seat attorney general race instead.

SOUTH CAROLINA GOVERNOR. Wealthy businessman John Warren once again didn’t rule out a Republican primary rematch against Gov. Henry McMaster, who defeated him 54-46 in 2018, though his “no comment” to the AP wasn’t especially informative. Warren, though, was far more open about his new bitcoin mining venture.

CALIFORNIA THIRTY-SIXTH CD. Assemblyman Eduardo Garcia told The Desert Sun that he wasn’t ruling out a run for Congress even if the state’s new congressional map pits him against Rep. Raul Ruiz, a fellow Democrat who has announced that he’ll seek a sixth term. “Ideally, Congressman Ruiz and I could consider running for the two separate, adjoining districts we live in to strengthen, together, our region’s voice,” said Garcia, adding, “At this point, nothing has been ruled out, and I await the final maps to see where I might best serve our community.”

Ruiz, for his part, says he’d run in the seat that’s home to the city of Coachella, where Garcia once served as mayor.

CALIFORNIA FORTY-SEVENTH CD. Long Beach Mayor Robert Garcia on Friday became the first notable Democrat to announce a campaign to succeed retiring Rep. Alan Lowenthal in what is currently a safely blue seat. Garcia, who is originally from Peru, won his current post in a close 2014 contest that made him the first Latino, immigrant, or LGBTQ person elected to lead what the 2020 census found was America’s 42rd-largest city, and he had no trouble winning re-election four years later.

Several other Democrats may take an interest in this constituency, especially once redistricting is complete, but state Sen. Lena Gonzalez quickly made it clear she’d back Garcia rather than run herself. Assemblyman Patrick O’Donnell has also been mentioned as a prospective candidate, though local political observers have also talked about him instead running to succeed Garcia in next year’s mayoral race.