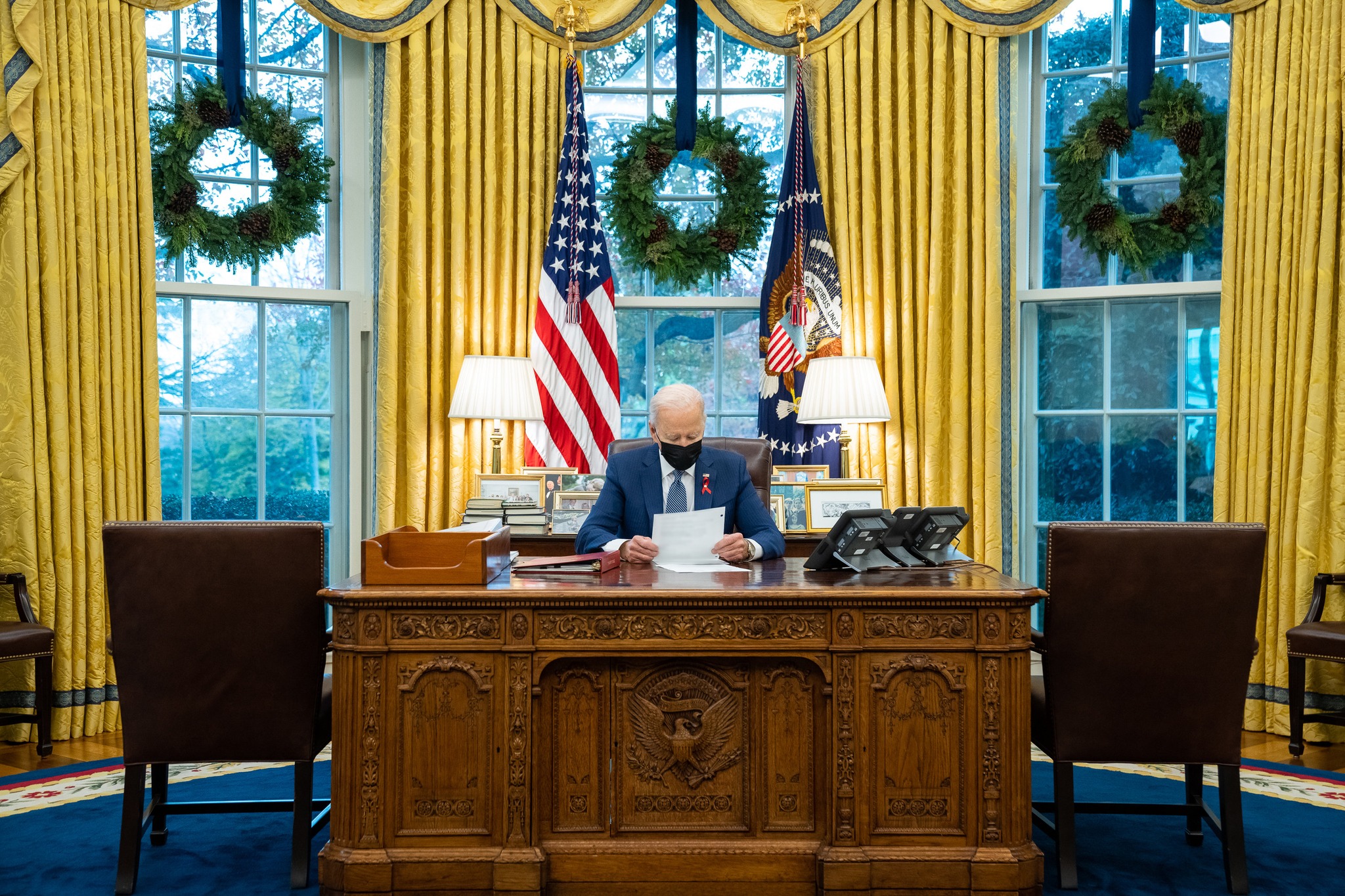 Steve Clemons, who is very close to Sen. Joe Manchin (D-WV), writes in The Hill that President Biden and the West Virginia senator agreed to delay action on the Build Back Better bill until March or April.

“But then – bang! – the White House released a statement on Friday blaming Manchin for the delay. It tried to strike a positive tone about the future, but it targeted Manchin specifically and alone…”

“I know Manchin. He believes in civility above all things… When I saw Manchin’s name in the presidential statement, I knew he would perceive it as a breach of process, a breach of spirit, a breach of Joe and Joe working this out so that politicians from Scranton and Charleston could find a way to align with those from Brooklyn and San Francisco.”

Make sure you read this story below to know just how petty Joe Manchin’s excuse was:

Sen. Joe Manchin (D-WV) blamed White House staff for the breakdown in negotiations over President Biden’s Build Back Better agenda and doubled down on his commitment to tanking the bill, Axios reports. Said Manchin: “I just got to the wit’s end.”

He added that White House staff “drove some things and they put some things out that were absolutely inexcusable. They know what it is.”

Jonathan Chait: “It is possible Manchin will remain so angry about Biden’s anodyne statement that no deal will be possible. But it seems extremely easy for Biden to repair this damage and soothe Manchin’s bruised ego at absolutely no cost in policy. Politics is about making things better, not speaking truth to power.”

Manchin has privately “told several of his fellow Democrats that he thought parents would waste monthly child tax credit payments on drugs instead of providing for their children,” the HuffPost reports.

“I would like to hope there are still Democrats who think like I do. I’m fiscally responsible and socially compassionate. Now, if there are no Democrats like that, then they’ll have to push me where they want me.”  — Sen. Joe Manchin (D-WV), when asked on a West Virginia radio show whether there’s a place for him in the Democratic party.

“Sen. Joe Manchin (D-WV) last week made the White House a concrete counteroffer for its spending bill, saying he would accept a $1.8 trillion package that included universal prekindergarten for 10 years, an expansion of Obamacare, and hundreds of billions of dollars to combat climate change,” the Washington Post reports.

“But Manchin’s counteroffer excluded an extension of the expanded Child Tax Credit the administration has seen as a cornerstone of President Biden’s economic legacy, an omission difficult for the White House to accept in the high-stakes negotiations.”

“Manchin’s private proposal to the White House — the details of which have not been previously reported — was made just days before a spectacular public collapse in negotiations.”

Jonathan Bernstein: “It’s not really clear what Manchin’s goals are. Suppose, however, that he wants to eventually support a bill. Along the way, it wouldn’t be surprising if he also wanted to differentiate himself as much as possible from the other 49 senators he’d eventually be voting with. If that’s the case, he might see the attacks from liberals as a necessary condition for his eventual ‘yes’ vote. If that’s the case, then Sunday was, perversely, a step toward passage.”

“While staff drafted language addressing Manchin’s specific concerns — on inflation, climate provisions and how the plan was paid for — Biden specifically instructed them to add that if Manchin stood by his comments, he had violated his word to the President.”

Politico: “One day after sinking President Joe Biden’s signature social and climate spending legislation, Manchin laid out a path forward that could take months and still fail. He wants the legislation to go through Senate committees and focus on rolling back the 2017 Trump tax cuts.”

“He also wants Democrats to stop trying to force him into compliance.”

Wall Street Journal: “Democrats on Capitol Hill and the White House began considering how—and if—they could alter the package to meet Mr. Manchin’s objections, according to people familiar with the early efforts. Cutting additional programs from the bill, and instead choosing a select few to fund for the long term, will be a politically difficult task for Democrats, pitting advocates for various party goals against each other for a slice of the bill’s funding…”

“Rep. Suzan DelBene (D-WA), chairwoman of the moderate New Democrats coalition, said Sunday that the party should choose a smaller set of programs to fund in the bill, listing the child tax credit, ACA subsidies and climate programs as worthy goals. Her statement was tweeted by White House officials, including White House chief of staff Ron Klain.”

Playbook: “White House officials are reimagining a scaled-back version of their social spending package that they hope could win Manchin’s approval.“

New York Times: “While the administration can use executive action and regulations, without legislation, experts say it will be virtually impossible to achieve President Biden’s goal of aggressively cutting the pollution generated by the United States, the country that has historically pumped the most planet-warming gasses into the atmosphere. That would have dire stakes for the planet, environmentalists said.”

Rep. Alexandria Ocasio-Cortez (D-NY) slammed the Democratic leadership, including President Biden, for the apparent death of the Build Back Better Act, saying that they could have never guaranteed support from Sen. Joe Manchin (D-WV), Axios reports.

Said Ocasio-Cortez: “The president did say that… the Build Back Better Act was promised and that he’s got it. We said, you know, he can’t— no one can really promise a Manchin vote.”

Senate Majority Leader Chuck Schumer (D-NY) plans to turn the screws on Manchin when the chamber reconvenes in January: The Democratic leader told his fellow Democrats on Monday morning in a “Dear Colleague” letter that BBB will be put to a vote in the new year.

Schumer took a thinly-veiled shot at Manchin in his announcement, saying that the vote on BBB would give senators “the opportunity to make their position known on the Senate floor, not just on television.”

The Senate will also consider voting rights as early as the first week back, according to Schumer, another piece of crucial legislation currently blocked by Manchin clutching to the filibuster.

Bloomberg: “U.S. financial markets are outperforming the world by the biggest margin in the 21st century, and with good reason: America’s economy improved more in Joe Biden’s first 12 months than any president during the past 50 years notwithstanding the contrary media narrative contributing to dour public opinion.”

The President is expected to give a speech on his administration’s response to the new COVID-19 variant ripping across the country on Tuesday, according to NBC News.

Sens. Elizabeth Warren (D-MA) and Cory Booker (D-NJ) announced on Sunday that they tested positive for the coronavirus. Both senators said they’re only experiencing mild symptoms.

“Speaker Nancy Pelosi has indicated there will be a ‘full program of events’ to mark the first anniversary of the Jan. 6 insurrection, in which a pro-Trump mob stormed the U.S. Capitol to try to stop the confirmation of President Biden’s electoral college win, a siege that resulted in five deaths and left some 140 law enforcement officers injured,” the Washington Post reports.

Washington state Sen. Doug Ericksen (R), an outspoken critic of Covid-19 emergency orders, has apparently died of the disease at the age of 52, the Seattle Times reports.  Ericksen had been reported missing after testing positive for the coronavirus while on a trip to El Salvador and then taken to a hospital in Florida.

House Jan. 6 select committee member Adam Kinzinger (R-IL) on Sunday didn’t rule out some of his Republican colleagues being directly responsible for the Capitol attack.

But Kinzinger isn’t “ready to go to that point yet” because he wants “let the facts dictate it.”

The Illinois Republican also mentioned how there are still plenty of texts the committee hasn’t released.

The suit argues that James’s inquiry, which has lasted more than two years, has violated Trump’s constitutional rights.

Sen. Chuck Schumer (D-NY) said that the Senate would take up stalled voting rights legislation as early as the first week of January and that if Republicans continued to filibuster, the Senate would “consider changes to any rules which prevent us from debating and reaching final conclusion on important legislation,” the New York Times reports.

Former President Trump revealed to Bill O’Reilly that he got his vaccine booster shot.  He was promptly booed by the crowd of supporters.   Sarah Palin gloated about being unvaccinated, telling an audience over the weekend that they should “stiffen” their spines against pressure to get vaccinated.  Said Palin: “It’ll be over my dead body that I’ll have to get a shot.”  That can be arranged.   She added: “If enough of us, though, rise up and say, ‘No, enough is enough’ — There are more of us than there are of them!”  Covid looks forward to infecting you and I hope it wipes the world clean of all of you.

“Senate Republicans are poised to deny President Joe Biden an appointment to the Supreme Court if they take the majority in the 2022 midterm elections,” CNN  reports.

“The White House has been pretty clear in recent days: Federal student loan payments will resume Feb. 1 as President Joe Biden lifts the nearly two-year pandemic-era pause despite pressure from many in his own party to extend it,” Politico reports.

“A congressional year that began with an assault on the seat of democracy ended at 4 a.m. Saturday with the failure of a narrow Democratic majority to deliver on its most cherished promises, leaving lawmakers in both parties wondering if the legislative branch can be rehabilitated without major changes to its rules of operations,” the New York Times reports.

Said Sen. Lisa Murkowski (R-AK): “It has been a horrible year, hasn’t it?”

“The Biden administration finalized a rule Monday to cut climate pollutants from new cars and light trucks, which will keep billions of tons of carbon dioxide from entering the atmosphere and change the kinds of vehicles Americans drive,” the Washington Post reports.

“The new limits on tailpipe emissions for the next four years marks President Biden’s biggest step yet to tackle climate change, but it comes as critical components of his plan for an all-electric future just suffered a major blow on Capitol Hill.”

“The swift arrival of a new coronavirus variant has rekindled economic anxieties in Washington, as congressional lawmakers, business leaders and consumer advocates begin to worry whether there is enough federal aid to shield Americans from another round of financial despair,” the Washington Post reports.

“Over the course of the nearly two-year pandemic, Congress has committed nearly $6 trillion toward combating the contagion and bringing a battered economy back from the brink. But some of the most significant programs to keep businesses afloat and help households pay bills have expired or run out of funds, raising new risks for the future of the country’s recovery, particularly as the omicron variant wave begins to take hold.”

“The outgoing director of the National Institutes of Health said Sunday that he faced political pressure from then-President Donald Trump and other Republicans to endorse unproven Covid-19 remedies such as hydroxychloroquine and to fire Dr. Anthony Fauci,” CNN reports.