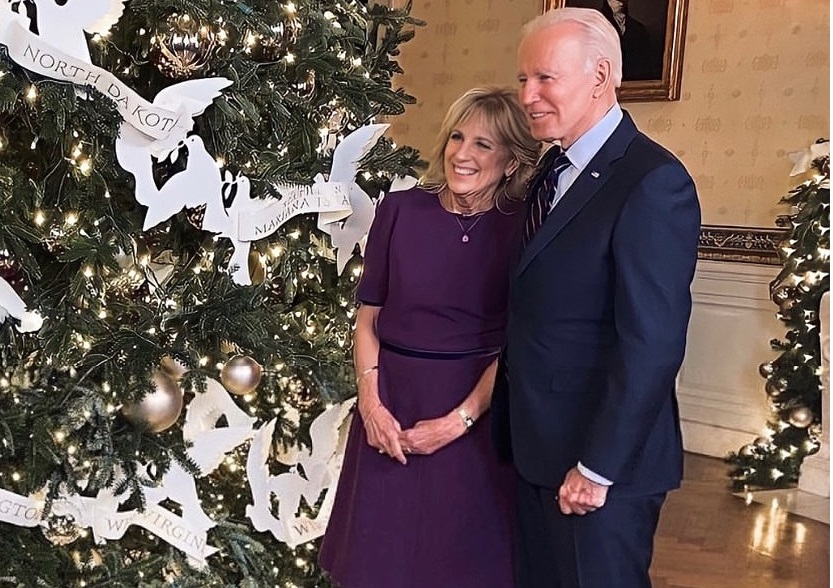 “Democratic Party leaders moved quietly this week to lower expectations for the midterm elections as they met for year-end talks against the backdrop of an increasingly bleak electoral landscape,” Politico reports.

“The House? Likely gone. The Senate? A crapshoot.”

“Interviews with more than two dozen state party chairs, executive directors and strategists suggest party officials are reframing the 2022 election as a defensive effort, with success defined as maintaining the Democratic Senate majority and holding back a Republican tide in the House.”

There’s growing discord between Democrats in battleground districts and the House Democratic campaign arm, particularly on messaging ahead of the 2022 midterm elections. At-risk members worry that the Democratic leadership is still embracing the Donald Trump-as-boogeyman strategy rather than emphasizing what Democrats have done to fix the country’s problems.

Jonathan Bernstein: “In a two-party system, both parties will eventually hold office. If one of those parties has turned against democratic norms, it will eventually hold power and, well, enact its preferences. It is extremely unlikely that rank-and-file voters would prevent such a party from taking power; people simply don’t vote based on that kind of abstraction. And thanks to partisan polarization, most voters will automatically support their team in any event.”

“Democracy depends on a willingness to lose elections. If that willingness starts wavering — as it seems to be for Trump and his allies — we’re in trouble.”

Democrats have been more trusted than Republicans on education issues for decades, but that lead has faded dramatically in recent polls. Parents watched their kids take classes remotely during the pandemic in horror and are now demanding big changes.

“Herschel Walker’s (R) campaign deleted a false claim that he graduated from the University of Georgia hours after it was posted on a website promoting his U.S. Senate bid,” the Atlanta Journal Constitution reports.

Texas Republican Attorney General Ken Paxton’s (R) election integrity unit “added two lawyers to the team in the last year, bringing it up to six staffers total, and worked more than 20,000 hours between October 2020 and September 2021. Its budget, meanwhile, ratcheted up from $1.9 million to $2.2 million during that time,” the Houston Chronicle reports.

“Yet records from the office show that the unit closed just three cases this year, down from 17 last year, and opened seven new ones. That includes the newly created unit focused on the 2021 local elections, which has yet to file a single case.”

“Florida election officials are hunting for snowbird voter fraud in the 2020 election, combing through records to uncover people who cast ballots in multiple states,” the South Florida Sun Sentinel reports.

“So far three residents of the sprawling Villages retirement community have been charged with voting more than once in last year’s presidential election. Lake County has turned over another six possible cases to state prosecutors for further investigation, and Osceola County flagged seven problematic votes.”

MISSOURI U.S. SENATOR. “Former Missouri Gov. Eric Greitens is banking on Republican voters forgiving his past indiscretions when they choose a U.S. Senate nominee next August. Many in the GOP establishment are hoping they don’t forget,” the AP reports.

“Senate Republican leadership concurs that a Greitens primary victory would hand the seat to Democrats. But so far they’ve taken a hands-off approach, convinced Greitens’ campaign will implode as he struggles to raise money and continues to be dogged by the scandal.”

TEXAS SEVENTH CD. Republicans made Democratic Rep. Lizzie Fletcher considerably safer in this Houston-based seat in order to shore up Republicans in nearby seats, ballooning Joe Biden’s margin of victory from 54-45 to 64-34. Fletcher did earn a last-minute primary challenge from wealthy healthcare executive Tahir Javed, but his last effort went poorly: Javed self-funded $1.3 million in his 2018 bid for the current 29th District only to lose the primary to the eventual winner, then-state Sen. Sylvia Garcia, 63-21.

TEXAS TWELFTH CD. Longtime Rep. Kay Granger got some very welcome news just as filing closed when she learned that wealthy businessman Chris Putnam, who held her to a 59-41 win in last year’s Republican primary, didn’t end up submitting his campaign paperwork; Putnam confirmed the next day that he’d decided not to run. Granger now faces no serious opposition in a Fort Worth-based seat that Donald Trump carried 58-40.

TEXAS TWENTY-THIRD CD. Republicans in the Texas legislature did whatever they could to protect GOP Rep. Tony Gonzales by extending Donald Trump’s margin from 50-48 to 53-46 in this sprawling west Texas seat. Marine veteran John Lira looks like the favorite to win the Democratic nomination to face the freshman congressman, though he needs to get past social worker Priscilla Golden first.

TEXAS TWENTY FOURTH CD. Perhaps no seat better represents how aggressive the Republicans’ new gerrymander is than GOP Rep. Beth Van Duyne’s 24th District in the Dallas-Fort Worth suburbs, which the GOP transformed from a 52-46 Biden constituency into a seat Trump won 55-43. The Democratic field consists of Marine veteran Derrik Gay, 2018 nominee Jan McDowell, and attorney Kathy Fragnoli, but it would take a lot to make this race competitive next year under these new boundaries.

TEXAS TWENTY EIGHTH CD. Rep. Henry Cuellar, who has long been one of the most conservative members of the Democratic caucus, faces a primary rematch against attorney Jessica Cisneros, a progressive who held him to a 52-48 victory in 2020. Educator Tannya Benavides is also in, and while she hasn’t attracted much outside support, her presence could be enough to throw this race to a runoff this time.

Seven Republicans are running as well, including businessman Ed Cabrera and Cassy Garcia, a former Ted Cruz staffer who is campaigning with his support. Republican legislators actually made this Laredo-based seat a hair bluer under the new map in order to weaken Democrats in the 15th District, as Joe Biden’s margin ticked up from 52-47 to 53-46.

TEXAS THIRTY-FOURTH CD. Incumbent Filemon Vela announced his retirement back in March and is now supporting the candidacy of 15th District Rep. Vicente González, a fellow Democrat who decided to run here after the new Republican map made his own seat more conservative. In order to weaken the 15th, though, the GOP extended Biden’s margin in the Brownsville-based 34th from 52-48 all the way to 57-42, which makes the Democratic nomination especially valuable. At least six other Democrats are running, but none of them appear to have the connections needed to mount a serious campaign against González.

TEXAS THIRTY-FIFTH CD. Democratic Rep. Lloyd Doggett decided to run for re-election in the 37th District rather than the new 35th District, which includes most of the territory he’s represented for a decade, and four Democrats are running to succeed him in this 72-26 Biden seat. The GOP legislature once again connected the Austin area with San Antonio by means of a pencil-thin corridor along Interstate 35, which has set up a battle between politicians from both major population centers.

From the Austin side are City Councilman Greg Casar, who has the backing of Mayor Steve Adler, and state Rep. Eddie Rodriguez. The most prominent candidate at the other end of the district, meanwhile, is former San Antonio City Councilwoman Rebecca Viagran.

TEXAS THIRTY-SEVENTH CD. Democratic Rep. Lloyd Doggett has decided to run for re-election in this new 75-23 Biden seat rather than run again in the 35th District, which he’s represented for the last 10 years. A few fellow Democrats are also running here, including Donna Imam, who lost to Republican Rep. John Carter last year in the current 31st District. Doggett’s existing constituency makes up just over 10% of this new Austin-based district, but it would be a huge surprise if the veteran congressman, who has represented Texas’ capitol city since 1995 under various maps, had any trouble in a primary, especially since he has the support of numerous local elected officials.