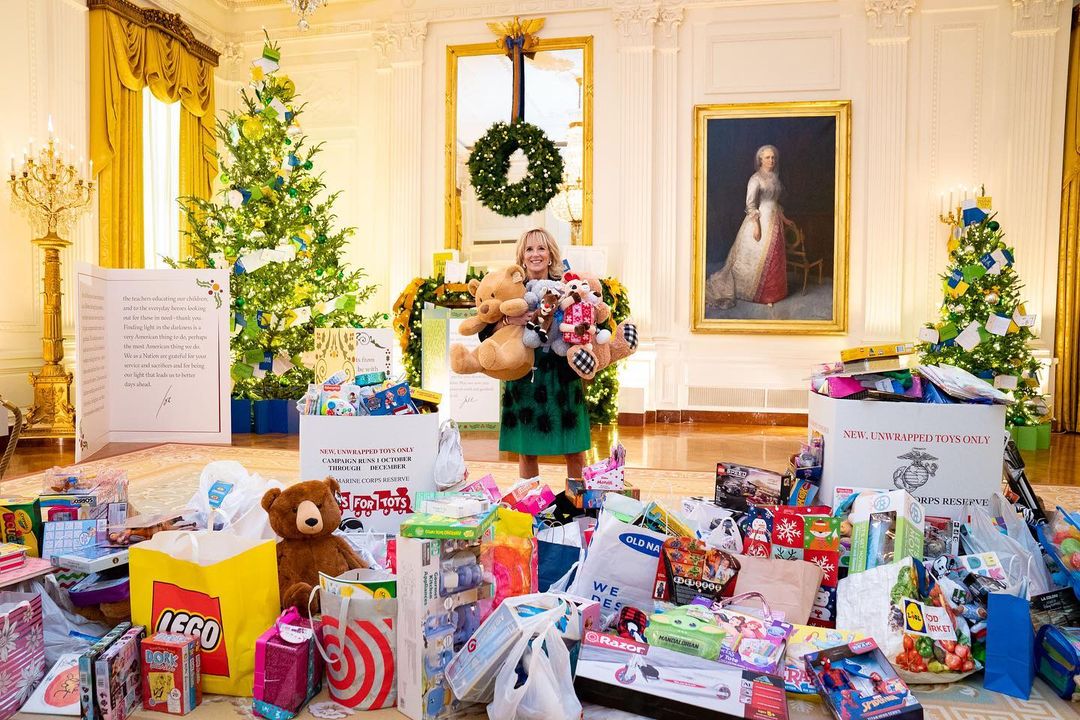 “Americans’ impressions of the nation’s economy remain gloomy and broad majorities think the federal government has done too little to try to solve problems with the nation’s supply chain and rising inflation,” according to a new CNN Poll.

“All told, three-quarters say they are worried about the state of the economy in their own community (75%) and 63% say the nation’s economy is in poor shape. Nearly 6 in 10 (57%) say that the economic news they’ve heard lately has been mostly bad, with just 19% saying they are hearing mostly good news about the economy right now.”

Jonathan Bersnstein: “President Joe Biden’s approval ratings seem to have bottomed out for now, and may even be rising. According to the FiveThirtyEight estimate (based on adjusted averages of all the public-opinion polls), he’s up to 43.8% approval, which is 1.5 percentage points above his Dec. 2 low; his disapproval is at 50.6%, down from a 52.3% peak just before Thanksgiving. Random variation could account for some of that move, but it seems likely that Biden’s slide stopped right around the beginning of November, and that he has probably recovered a bit since then. He’s still, to be sure, below water. At least for now.”

“Biden also remains the least popular of the 14 polling-era presidents at this point, 330 days into his presidency, except for Donald Trump, who was dead last for most of his first year and close to last during most of his presidency. The good news for Biden is that he’s now closer to the tier ahead of him — Barack Obama, Ronald Reagan, Gerald Ford and Harry Truman — than he is to Trump.”

Daily Beast: “New documents show Kanye West’s doomed White House campaign—styled as an ‘independent’ third-party effort—appears to have disguised potentially millions of dollars in services it received from a secretive network of Republican Party operatives, including advisers to the GOP elite and a managing partner at one of the top conservative political firms in the country.”

“Potentially even more alarming? The Kanye 2020 campaign committee did not even report paying some of these advisers, and used an odd abbreviation for another—moves which campaign finance experts say appear designed to mask the association between known GOP operatives and the campaign, and could constitute a violation of federal laws.”

Dallas Morning News: “Nearly a quarter of a million people were incarcerated in Texas when the Census was taken last year. When lawmakers redrew the state’s voting maps this fall, these inmates were counted in the prison towns where they were locked up, rather than where they lived beforehand.”

“A Dallas Morning News analysis of Census and prison data found this practice, which opponents call “prison gerrymandering,” inflates the political power of Republican districts while draining clout from Democratic strongholds. It also makes more conservative, rural areas of the state look larger and more diverse than they truly are.”

Washington Post: “Since Trump returned from his New Jersey club to Palm Beach, Fla., this fall, Mar-a-Lago has become a hotbed for Republican fundraisers, with candidates jockeying to line the former president’s pockets in hopes of winning his endorsement, get a photo with him or simply give donors a chance to be in his presence.”

“The surge in business at his private club spotlights the unparalleled way in which Trump has personally profited from his presidency and his popularity in the GOP — a revenue stream that began during his time in the White House and has only strengthened since he left office. Rather than hosting fellow Republicans, Trump is charging them for the privilege of using his venues.”

TEXAS FIFTEENTH CD. Democratic Rep. Vicente Gonzalez decided to run for the considerably safer 34th District not long after the Republican-run legislature passed a new map that shifts the 15th from a 50-49 Biden seat into a 51-48 Trump constituency, and both parties have crowded primaries for this seat in the Rio Grande Valley.

The Republican race has been underway for some time. The GOP’s top candidate appears to be 2020 nominee Monica De La Cruz, who held Gonzalez to a shockingly slim 51-48 victory last time despite raising very little money. This time, though, De La Cruz has plenty of money as well as endorsements from House Minority Leader Kevin McCarthy and Sen. Ted Cruz. She attracted unwanted headlines in November, however, after the public learned that her husband had accused her of physically and verbally abusing her 14-year-old stepdaughter in documents he’d filed the previous month as part of the couple’s divorce proceedings, but the story has yet to derail her campaign.

The Republican field also includes eight other contenders. Some of the more notable names include Mauro Garza, a self-funder who last year lost to Democratic Rep. Joaquin Castro in the safely blue 20th District, and Wilson County Justice of the Peace Sara Canady.

At least six Democrats are running, but we may need to wait for a bit for this race to fully take shape. The roster includes nonprofit official Eliza Alvarado and businesswoman Michelle Vallejo, who announced just before filing. One important metric for evaluating these newer contenders won’t be available until Jan. 31, when federal candidates have to file their next quarterly fundraising reports.

Paxton’s most prominent foe is Land Commissioner George P. Bush, but Bush has his own weaknesses with the party’s nativist base. Also in the running are former state Supreme Court Justice Eva Guzman and Rep. Louie Gohmert, whom then-Speaker of the House John Boehner once described as “insane,” adding, “There’s not a functional brain in there.”

PENNSYLVANIA SIXTEENTH CD and GOVERNOR. Republican Rep. Mike Kelly announced Monday that he’d seek a seventh term in what is currently a 59-40 Trump seat in the Erie area. Kelly had talked about running for governor earlier this year, and while he reportedly told his colleagues in the spring that he wouldn’t campaign statewide, this is the first time he’s publicly confirmed he’ll stay out of that race. Kelly faces a House Ethics Committee probe over his alleged intervention on behalf of a steel company his wife had invested in.

NEW JERSEY SIXTH CD. Monmouth County Commissioner Sue Kiley said this week that she was considering seeking the Republican nomination to take on longtime Democratic Rep. Frank Pallone and would decide in the new year. The current version of this seat, which includes northern Middlesex County and the northern Jersey Shore, is reliably blue turf at 57-42 Biden, but the state’s bipartisan Redistricting Commission has yet to complete its work.

OHIO U.S. SENATOR. Self-funding businessman Bernie Moreno, a Republican who launched a new ad buy at the start of the month for a reported $4 million, uses his new commercial to proclaim, “President Trump says the election was stolen, and he’s right.” The spot claims that social media hid unfavorable stories about Joe Biden while the media joined Democrats in “smearing” Trump, with the narrator expressing his disgust that “the liberal media, elites, and big tech all say we should move on.” Moreno continues, “Facebook might delete this ad, but I’m paying to air it so you know the truth.”

However, as the Washington Post’s Dave Weigel points out, Moreno himself believed that Republicans should move on from the 2020 race 13 months before he started running this commercial. Moreno tweeted days after the election, “To my conservative friends: accept the results of 140m+ votes cast,” and, “Congratulations to @JoeBiden and @KamalaHarris for their hard fought victory. Now is the time for unity.” Naturally, he ended the time for unity by deleting those tweets.

IOWA GOVERNOR. Frank Cownie, the longtime mayor of Des Moines, didn’t quite rule out seeking the Democratic nomination for governor in an interview with Axios, but he came close. Cownie said he was “not seriously thinking about” taking on Republican Gov. Kim Reynolds and added that he hoped others entered the primary.

Mizeur already had the support of Sen. Chris Van Hollen as well as three other members of the state’s House delegation: Reps. Anthony Brown, Kweisi Mfume, and Jamie Raskin. Additionally, former Rep. Wayne Gilchrest, a moderate who lost the 2008 Republican primary to Harris in a previous version of this district, is also in her corner. Mizeur, who would be the first LGBTQ person to represent Maryland in Congress, ended September with a huge financial edge over her most prominent intra-party foe, foreign policy strategist Dave Harden.

IOWA FIRST and SECOND CDs.  EMILY’s List has endorsed state Rep. Christina Bohannan and state Sen. Liz Mathis, neither of whom has any serious opposition in their respective Democratic primaries. Bohannan is challenging Republican Rep. Mariannette Miller-Meeks in the revamped 1st District, while Mathis is taking on GOP incumbent Ashley Hinson in the redrawn 2nd District.

TEXAS SEVENTH CD. Wealthy healthcare executive Tahir Javed said Tuesday that he was abandoning his day-old Democratic primary campaign against Rep. Lizzie ​​Fletcher, a move that leaves her with no intra-party opposition. The Republican legislature made this Houston-area seat far more Democratic in order to shore up GOP incumbents in other districts, and Fletcher should have nothing to worry about in a general election for what is now a 64-34 Biden constituency.

TEXAS FIRST CD. We start our rundown of Texas House filings with, appropriately enough, the state’s 1st Congressional District. Nine-term Rep. Louie Gohmert is leaving behind this 72-26 Trump seat in northeast Texas in order to run for attorney general, and four of his fellow Republicans are competing to succeed him. The frontrunner appears to be Smith County Judge Nathaniel Moran, whose constituency is home to 30% of the district’s population. Also in the running are former Gohmert staffer Aditya Atholi; businessman Joe McDaniel; and John Porro, who lives in Dallas—far from the 1st District.

TEXAS THIRD CD. Republican Rep. Van Taylor likely will have nothing to fear in a general election under the GOP’s new gerrymandered map, which dramatically increased Donald Trump’s margin of victory in this Plano-area seat from 50-49 to 56-42. However, the incumbent does have a potentially competitive primary ahead of him. Taylor’s main foe is former Collin County Judge Keith Self, who retired in 2018 as the leader of his large suburban Dallas community.

Self kicked off his campaign back in October by taking Taylor to task for voting to accept Joe Biden’s Electoral College victory in the hours after the attack on the Capitol, as well as for supporting the creation of the Jan. 6 commission. Both men start with large geographic bases: Taylor currently represents about three-quarters of the new 3rd District, while close to 90% of the constituency resides in Collin County (the balance is in Hunt County). Four other Republicans are also running.

TEXAS FOURTH CD. There’s little indication that freshman Republican Rep. Pat Fallon is vulnerable in a primary for this 62-36 Trump seat in east Texas, but he does face a notable intra-party opponent in the form of former News 12 anchor Dan Thomas. Thomas, who was fired in October for refusing to get vaccinated for what he claimed were health reasons, framed his campaign as an anti-corruption effort, arguing, “The reason why it doesn’t change is because too many politicians up there are profiting off the very system that they claim they’re gonna go up there and fix.” One other Republican is also in.

Only about 55% of this seat is in Fallon’s current 4th District, though this will actually be his first congressional primary. That’s because party leaders awarded Fallon the GOP nod last year after incumbent John Ratcliffe resigned well after the primary to become Trump’s director of national intelligence.