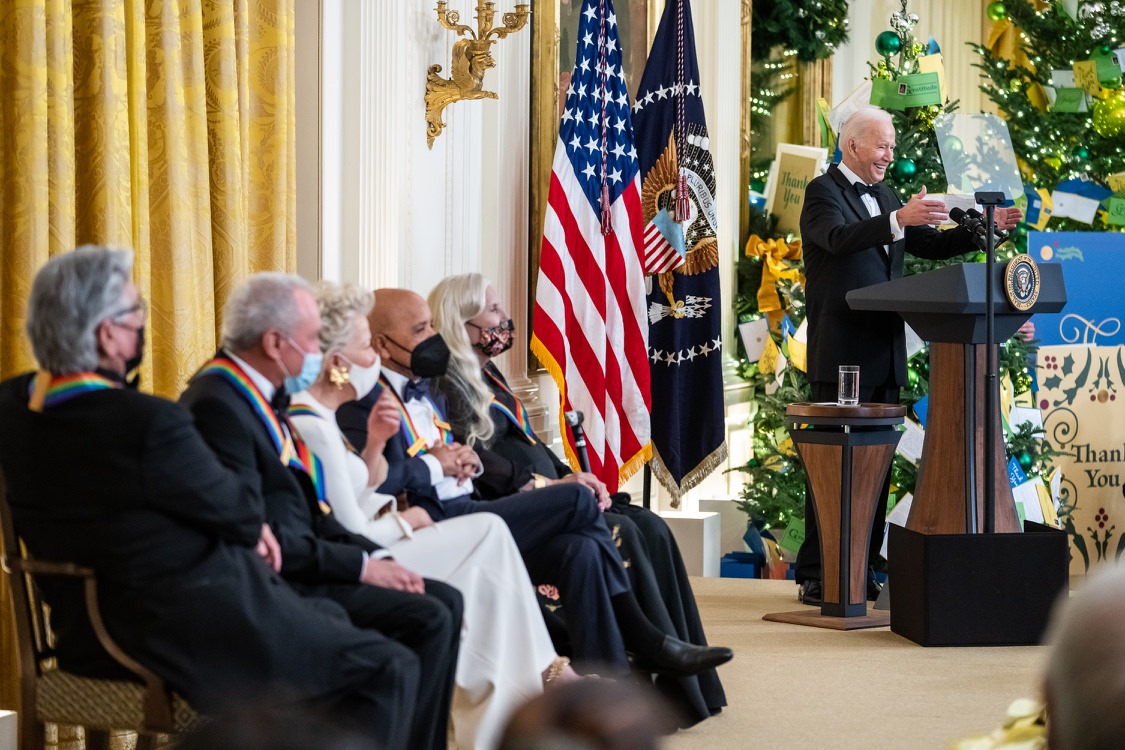 A new Economist/YouGov poll finds 29% of adults under age 30 approve of the job President Biden is doing, while 50% disapprove.

“This is a sharp reversal from the beginning of the year, when young voters gave Biden a net approval rating 32 points higher than older people did. And Biden is falling out of favor fastest with the youngest groups.”

Vice President Kamala Harris told the Wall Street Journal that she and President Biden have never discussed whether he plans to run for re-election and that it isn’t a topic she thinks about as they near the end of their first year in office.

Said Harris: “I’m not going to talk about our conversations, but I will tell you this without any ambiguity: We do not talk about nor have we talked about re-election, because we haven’t completed our first year and we’re in the middle of a pandemic.”

Asked if she assumed Biden would run again, she said: “I’ll be very honest: I don’t think about it, nor have we talked about it.”

Rep. Dina Titus (D-NV) said she “totally got fucked” by the Democratic state legislature in redistricting, the Nevada Current reports.

Said Titus: “I’m sorry to say it like that, but I don’t know any other way to say it.”

“Titus was referring to a shift of Democrats away from the first congressional district, historically an ironclad safe seat for Democrats, in order to strengthen their position in the state’s two swing districts. She warned the three congressional seats held by Nevada Democrats are now at risk of turning Republican during the 2022 election cycle, under the new maps approved by the state lawmakers and the governor last month.”

She added: “You read that the Republicans are using gerrymandering to cut out Democratic seats, but they didn’t have to in this state. We did it to ourselves.”

Larry Sabato’s Crystal Ball reports there are now 26 states with congressional maps in place for the 2022 election.

“Based on our Crystal Ball ratings for the new districts in these completed states, we have 99 districts at least leaning to the Republicans, 65 at least leaning to the Democrats, and 5 Toss-ups. One of the Toss-ups is a newly-added seat in Colorado, CO-8; the other 4 are currently Democratic-held seats IA-3, IL-17, ME-2, and NC-1. So one way of looking at this is that the Republicans are up 3 seats in these states, collectively, while the Democrats would have to win all of the Toss-ups just to get to the 70 seats they currently hold in these states.”

TEXAS THIRTY-EIGHTH CD. Army veteran Wesley Hunt impressed Republican leaders last year with his unsuccessful campaign to unseat Democratic Rep. Lizzie Fletcher in the 7th District, making him the heavy favorite this time to claim this new 58-40 Trump seat in the Houston suburbs. Several fellow Republicans are also running, but the only one who looks notable is Mark Ramsey, a former State Republican Executive Committee member who launched his campaign on the final day of filing.

“A grand jury indicted former Houston police captain Mark Aguirre on an assault charge after he was accused of running a man off the road and pointing to a gun to his head because he thought he was committing voter fraud in the run-up to the 2020 election,” the Houston Chronicle reports.

TEXAS SEVENTEENTH CD. While Republican Willie Blackmon, a former municipal judge in Harris County, launched a primary campaign against Rep. Pete Sessions last month, he doesn’t appear to have actually filed paperwork to run. Sessions should have no trouble in either the primary or general election for this 61-38 Trump seat.

TEXAS TWENTY SEVENTH CD. Republican Rep. Michael Cloud faces a primary challenge from A.J. Louderback, who is the sheriff of tiny Jackson County, as well as five other opponents, but there’s little reason to think the incumbent is in danger in this 60-37 Trump seat in the Corpus Christi area. Just in case, though, Cloud has Trump’s endorsement.

TEXAS EIGHTH CD. Veteran Rep. Kevin Brady is retiring from this 63-36 Trump seat, which includes the northern Houston area and nearby rural counties, and at least seven fellow Republicans are competing to succeed him. The two main candidates at this point appear to be retired Navy SEAL Morgan Luttrell and former Brady campaign manager Christian Collins. Luttrell has the backing of former Gov. Rick Perry and Lt. Gov. Dan Patrick, while Sen. Ted Cruz is supporting Collins.

CALIFORNIA FORTY-SEVENTH CD. Democratic Rep. Alan Lowenthal, a longtime elected official in the Long Beach area, announced Thursday that he would not seek a sixth term in California’s 47th Congressional District. The current incarnation of Lowenthal’s constituency, which includes most of Long Beach as well as nearby communities in Los Angeles and Orange counties, is solidly blue turf at 62-35 Biden, though the state’s independent redistricting commission is still completing the new map.

Speculation immediately began that Long Beach Mayor Robert Garcia could run to succeed his fellow Democrat, and the mayor, who is up for re-election in 2022, did not respond to questions about his plans. Rob Pyers of the California Target Book also name-dropped state Sen. Lena Gonzalez and Assemblywoman Cristina Garcia (who does not appear to be related to Robert Garcia) as possibilities for the Dems.

NORTH CAROLINA U.S. SENATOR. State Sen. Jeff Jackson announced Thursday that he was dropping out of the Democratic primary and endorsing former state Supreme Court Chief Justice Cheri Beasley, a move that leaves Beasley as the Dem’s only major candidate in one of the party’s top Senate targets in the nation.

No other Democrats have shown any obvious interest in taking on Beasley, so it would be a huge surprise if she had any trouble securing the nomination in the primary, which her former colleagues on the state’s highest court moved from March to May due to ongoing litigation over the state’s congressional map. Indeed, Beasley picked up an endorsement hours after Jackson’s departure from Rep. Deborah Ross, who was the party’s Senate nominee in 2016. Republicans, meanwhile, still have an intense and already very expensive intra-party fight ahead of them between former Gov. Pat McCrory and the Trump-backed Rep. Ted Budd.

Jackson, an Afghanistan war veteran who has been one of the party’s most prominent rising stars, used his Thursday video to explain he was leaving the race because Beasley was well ahead in the polls and that a “costly and divisive primary will sink this whole.” That decision still surprised plenty of observers, but the state senator explained his thinking in an interview with Axios’ Michael Graff that took place before his announcement.

Jackson relayed that his advisers told him the only way to pull ahead was to attack Beasley, but he’d decided against that route “[n]ot because I have a particular problem being critical when I think it’s fair, but just in her case, it would not have been honest.” He continued, “She has over a decade of exemplary public service to her name. And the prospect of suggesting otherwise on television ads, was just a non-starter with me.”

Jackson, who is white, also noted that plenty of activists believed it was vital to elect a Black woman like Beasley. “Those comments were fair. They were fair,” he said, adding, “We’ve had two Black women ever, as U.S. senators. That is wrong. It is.” Graff additionally noted in his story that, despite Jackson’s three-month head start, Beasley had nearly caught up to Jackson in fundraising by the end of September and even enjoyed a cash-on-hand lead.

MASSACHUSETTS GOVERNOR. Former U.S. Attorney Andrew Lelling very much did not rule out seeking the Republican nomination for governor when WBUR asked him on Wednesday, saying, “I don’t want to comment right now on whether I am, or am not, thinking about running for [the governor’s office].” The Boston Herald reported earlier this month that Lelling was considering running to succeed his fellow Republican, retiring incumbent Charlie Baker.

COLORADO THIRD CD. To the surprise of no one, Donald Trump has endorsed far-right Rep. Lauren Boebert in next year’s Republican primary.

TEXAS THIRTIETH CD. VoteVets has endorsed progressive activist Jessica Mason, a Navy veteran who launched a bid for the Democratic nomination before Rep. Eddie Bernice Johnson confirmed that she would retire.

OREGON FOURTH CD. Andrew Kalloch, who works as a policy executive at Airbnb, has filed FEC paperwork for a potential campaign to succeed his fellow Democrat, retiring Rep. Peter DeFazio. While Kalloch didn’t quite commit to running, he told Oregon Capital Chronicle’s Julia Shumway that he planned to announce sometime in the new year.

Meanwhile, state Sen. Sara Gelser Blouin said that she wouldn’t seek the Democratic nod. Shumway also relays that fellow state Sen. James Manning has also decided against running, though there’s no quote from him; the story also says that Coos County Commissioner Melissa Cribbins previously told the Oregon Capital Chronicle she was thinking about joining the race. The only notable declared Democratic candidate so far is Labor Commissioner Val Hoyle, who announced shortly after DeFazio made his plans known.

“Supporters of Sawant — Seattle’s only socialist council member and the first in the city’s history to have a recall ballot against her — narrowly outdid those in favor of a recall, claiming 50.4% of the vote.”

“The political consultant who orchestrated Virginia Gov.-elect Glenn Youngkin’s highly complicated, arm’s-length dance with former president Donald Trump recently made a pilgrimage to Mar-a-Lago to smooth over some hard feelings, forge an alliance and tout his company ahead of Trump’s potential 2024 campaign,” the Washington Post reports.

“Political consultant Jeff Roe, who clashed with Trump while working for presidential rival Ted Cruz in 2016, made the trip in recent weeks after the former president agreed to see him.”