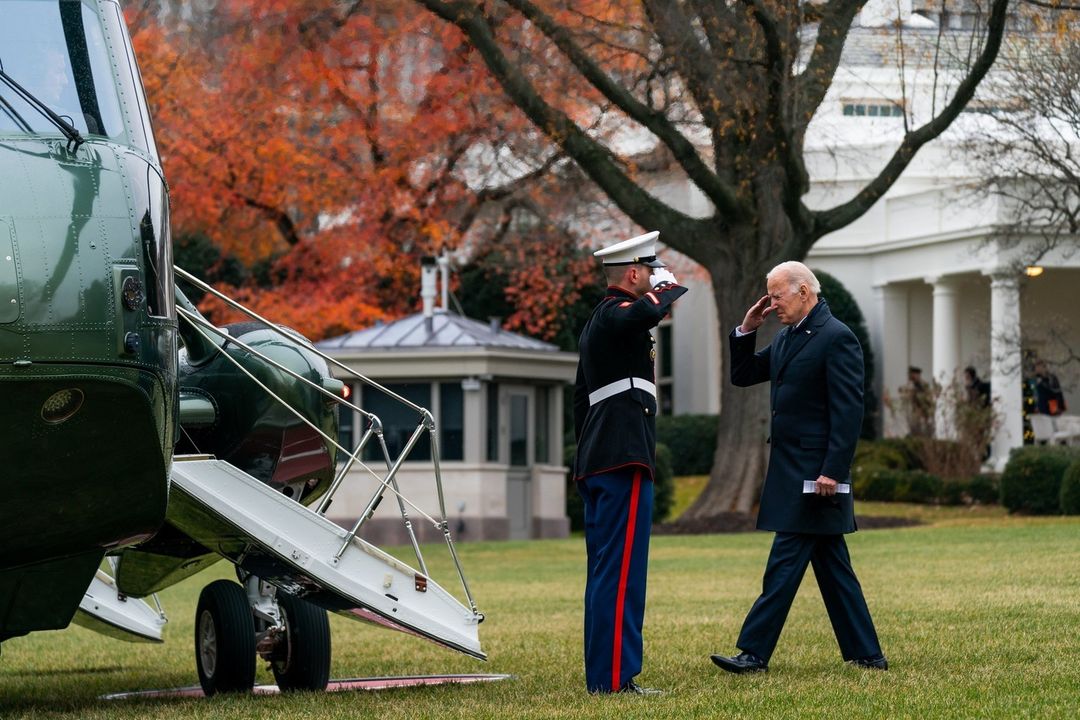 “Kyrsten Sinema supports the elections reform bill that Democrats are considering a year-end push to pass. She doesn’t support a shortcut around the filibuster to get it done,” Politico reports.

“The Arizona moderate is making clear that she intends to keep protecting the Senate’s 60-vote requirement on most legislation and she isn’t ready to entertain changing rules to pass sweeping elections or voting legislation with a simple majority.”

Amid hand-wringing over the costs of child tax credits and other social benefits, the Senate approved $770 billion for the National Defense Authorization Act on Wednesday by an overwhelming majority of 88 votes against 11. Who says bipartisanship is dead?

Sen. Joe Manchin (D-WV) “has rejected a provision that would prohibit all future drilling off the Atlantic and Pacific Coasts as well as the eastern Gulf of Mexico,” the Washington Post reports.

“He also expressed surprise at top Democrats’ decision to include language ending an oil and gas leasing program in the pristine refuge, a longtime priority for party leaders and their environmentalist allies, but he has not indicated whether he will oppose it.”

Playbook: “It’s a fitting end to a year dominated by two Senate Democrats at the center of pretty much everything in 2021: Joe Manchin and Kyrsten Sinema have all but put the kibosh on two major proposals their own party was hoping to pass before the holiday break.”

However, from Punchbowl News: “Democrats are fighting among themselves over SALT and immigration. That’s not Manchin’s fault. And the parliamentarian hasn’t finished scrubbing the bill for possible Byrd Rule problem. And that isn’t Manchin’s fault.”

“So let’s be real. It’s not just Manchin. He’s a big problem for the leadership and White House, easily the most high profile headache, but hardly the only one. They don’t have the text of the legislation finished. The parliamentarian is still grinding away.”

The difference in death rates from Covid-19 between Republican and Democratic counties is becoming even more staggering.

Tomas Pueyo: “If you haven’t had COVID before, you’re going to get it.”

“You can only escape it while you lock yourself out. The moment you come back into society, you will get exposed to it. Paradoxically, this can be good.”

“This is the final battle for COVID. It’s throwing everything it has at us and will overwhelm the world. But in doing so, it might have weakened itself. And it’s attacking at a moment when the world is well-armed with vaccines and prior infections.”

“In this final battle, many people will die. But they might be few in comparison to what it could have been.”

The Guardian: Omicron found to grow 70 times faster than Delta in bronchial tissue.

House Speaker Nancy Pelosi (D-CA) threw cold water on the idea of prohibiting members of Congress and their spouses from trading stocks while in office yesterday because “we are a free-market economy,” therefore lawmakers “should be able to participate in that.”

Even though Biden invited the entire Kentucky congressional caucus to join him on his visit to their state yesterday to survey the damage caused by the deadly tornadoes over the weekend, according to the White House, the only Republican who took him up on his invite was Rep. James Comer (R-KY).

Comer’s district includes the areas where the tornadoes destroyed homes and businesses.

The federal government will pay for 100 percent of the costs for emergency recovery in Kentucky for the first 30 days after the disaster, Biden announced during his trip.

At least 71 people in Kentucky have been confirmed dead, according to a Kentucky Emergency Management spokesperson.

San Francisco Mayor London Breed (D) blasted the rash of crime that has swept through her city in recent months, KPIX reports.

Said breed: “It’s time the reign of criminals who are destroying our city, it is time for it to come to an end. And it comes to an end when we take the steps to more aggressive with law enforcement. More aggressive with the changes in our policies and less tolerant of all the bullshit that has destroyed our city.”

Said James: “What we need to do is hold these gun manufacturers and these gun distributors liable.”

“The Biden administration is ending the practice of holding undocumented migrant families in detention centers, turning to remote tracking technology such as ankle bracelets as alternatives,” Axios reports.

“As of Friday, the U.S. had zero migrant families in detention facilities, with the last and largest facility used for the practice now being slated to hold only single adults.”

“As Donald Trump and his allies squeezed then-Vice President Mike Pence to single-handedly stop Joe Biden’s presidency in the weeks ahead of Jan. 6, they used one particular tool that’s been largely ignored ever since,” Politico reports.

Rep. Louie Gohmert (R-TX) sued Pence on Dec. 27, just as Trump was ratcheting up his pressure campaign against his vice president… Gohmert’s move forced Pence to publicly resist Trump’s subversion of the election, only a week before the fateful Jan. 6 joint session of Congress. When the Justice Department stepped in to defend Pence from the lawsuit on Dec. 29, it marked the first time Pence signaled he wouldn’t fold to Trump’s demands.”

“But what remains unknown is just how involved Trump was in Gohmert’s legal strategy.”

Roger Stone will appear for a Jan. 6 committee deposition tomorrow and plead the Fifth to each question asked, Politico reports.

“A small circle of Republican lawmakers, working closely with President Donald Trump’s chief of staff, took on an outsize role in pressuring the Justice Department, amplifying conspiracy theories and flooding the courts in an attempt to overturn the 2020 election,” the New York Times reports.

“A former nominee for director of the so-called blank-check company that plans to merge with former President Donald Trump’s social media start-up is suing, claiming he was frozen out of the deal,” the New York Times reports.

“Brian Shevland, the former nominee, is seeking monetary damages over what his suit calls a ‘brazen act of fraud.’”

“He wouldn’t leave me alone. He never stopped thinking about this stuff. I’m not saying he was an early riser, but the moment he woke up, he would be like a bat out of hell. Before you’d get to work, everyone would have ten emails that would destroy your morning.”

“He was just so brutally mean to people. I can’t stand the man.”

“Really, really hard to take. Constantly being lectured and patronized.”

Rep. Lauren Boebert (R-CO) tweeted that “365,348 children went missing in 2020” and criticized “the media” for lacking coverage of that statistic, Insider reports.

She added: “There enlies the problem,” appearing to intend to use the phrase, “therein lies.”

“While that number is technically correct — there were 365,348 reports of missing children entered into the FBI’s National Crime Information Center database last year — nearly 95% of those were categorized as runaways, or children who leave home without permission and stay away for at least one night.”

Gideon Rachman: “For decades, American military planning was based on the idea that the US should be able to fight two wars, in different parts of the world, simultaneously. But even the gloomiest strategists did not plan for three wars at the same time.”

“The administration of Joe Biden, however, is currently facing militarised crises in Europe, Asia and the Middle East. Collectively, they amount to the biggest challenge to America’s global power since the end of the cold war.”

“Derek Chauvin, the former Minneapolis police officer convicted of murder in the death of George Floyd, signaled Monday that he intends to plead guilty in a separate federal civil rights case,” the Washington Post reports.

“The details of Chauvin’s plea were not immediately filed in court, and it was not clear what he would admit or what benefit he would receive for doing so. The change of plea must still be accepted by a federal judge.”

Afghan Foreign Minister Amir Khan Muttaqi also told the Associated Press the Taliban is “committed in principle to education and jobs for girls and women, a marked departure from their previous time in power, and they seek the world’s ‘mercy and compassion’ to help millions of Afghans in desperate need.”

He added that the Taliban government “wants good relations with all countries and has no issue with the United States. He urged Washington and other nations to release upward of $10 billion in funds that were frozen when the Taliban took power Aug. 15, following a rapid military sweep across Afghanistan and the sudden, secret flight of U.S.-backed President Ashraf Ghani.”

Washington Post: As evacuations from Afghanistan slow to a trickle, some “at risk” allies may face long road to the United States.

“The Taliban have executed scores of officials linked to the fallen government and displayed their bodies to spread fear despite declaring an amnesty after taking over the country in August,“ the Times of London reports.

The United Nations Human Rights Council “said it had heard of the killings of more than 100 former government officials, most attributed to the Taliban, along with the summary execution of suspected Islamic State members, including hangings and beheadings.”