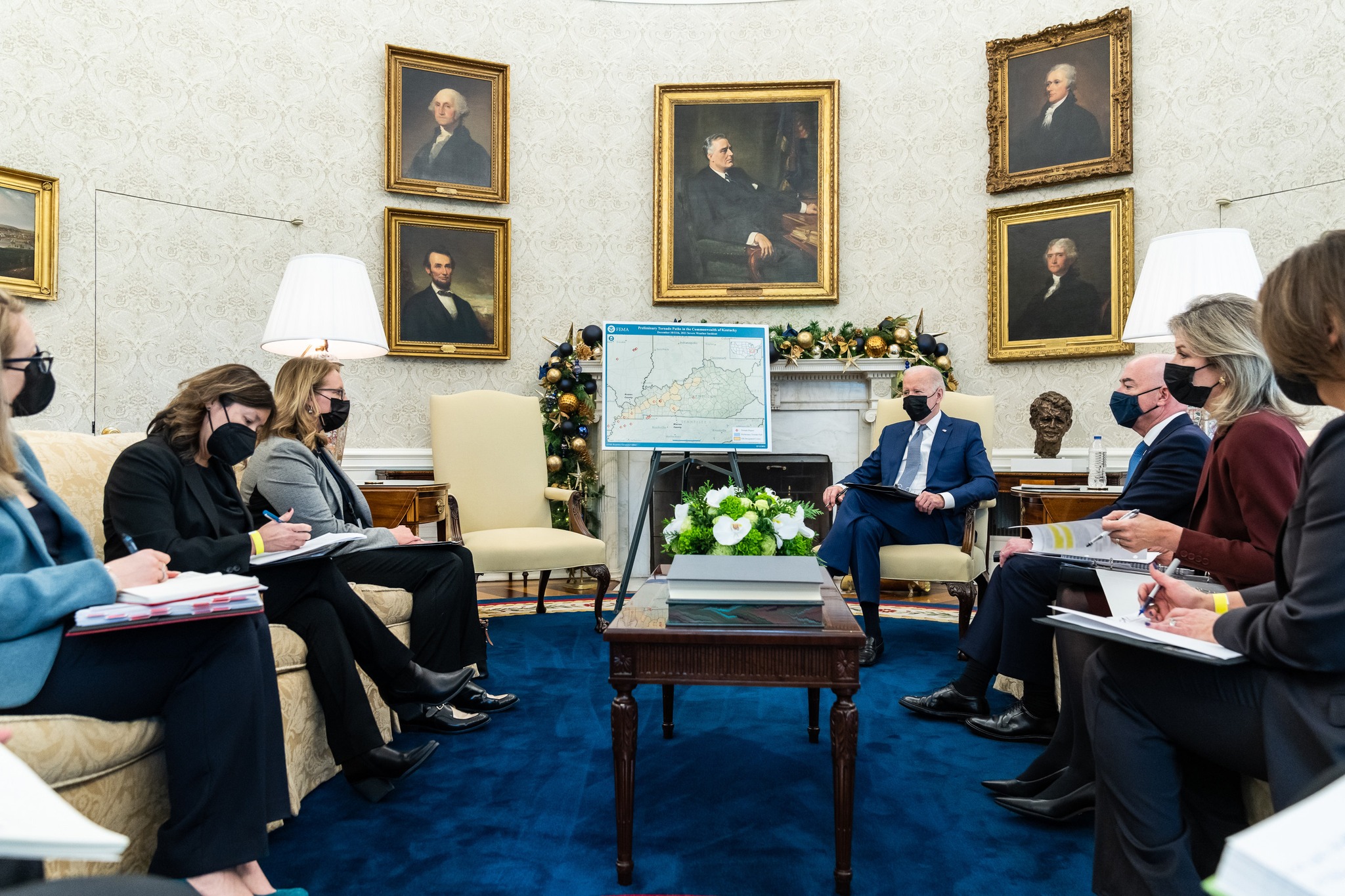 Sen. Joe Manchin (D-WV) has a phone call with President Biden to discuss the Build Back Better legislation this afternoon, but it “sounds like he’s in absolutely no hurry to move forward,” NBC News reports.

Said Manchin: “If it’s whatever plan it will be, pre-K, child care and in-home care, then it should be 10 years, it shouldn’t just be one year here, three years here, five years there. And I think it’d be very transparent for the public to see exactly what they’d be getting for what we’re spending for 10 years.”

Playbook: “Changing these time frames would amount to a major reworking of the bill.”

“Chuck Schumer leapt over the trap doors of a potential government shutdown and debt default. Now he has to stick the landing on one of the largest spending bills in American history,” Politico reports.

“As the Senate majority leader checks off his chamber’s list of must-pass bills, he’s turning to the urgent task of passing President Joe Biden’s $1.7 trillion social safety net bill before the long holiday break. Just a few obstacles lie in his way: Joe Manchin’s concern over rising inflation, the need for total party unity and only a few days left to meet his goal of final passage by Christmas. Oh, yeah, and the final deal isn’t finished yet.”

Playbook: “Schumer has been adamant that his chamber will clear the party’s $1.7 trillion social spending package before senators leave for the holidays. Yet everyone knows that won’t happen without the stubborn West Virginia Democrat — and Democrats are looking for some presidential arm-twisting to get him there.”

Punchbowl News: “Biden and Manchin will speak about the BBB as early as today, a discussion that will go a long way toward deciding whether the $1.7 trillion package — the president’s top legislative priority — can be finished before Christmas or will slide into 2022.”

A new poll shows that nearly two-thirds of West Virginia voters think BBB will make inflation worse and a slightly larger share think Congress “should slow down and get the Build Back Better Act right.”

Elon Musk has been named Time magazine’s 2021 Person of the Year.

Sen. Joe Manchin (D-WV) will take part in a meeting tomorrow to discuss how Senate Democrats may be able to alter the filibuster to advance national voting rights legislation, Punchbowl News reports.

The Jan. 6 committee is moving to hold former White House chief of staff Mark Meadows in contempt of Congress for refusing to comply with its subpoena, per the panel’s new resolution released on Sunday. But as we’ve pointed out before, Meadows has already cooperated to a limited extent, and the committee is now teasing some of what Meadows coughed up.

Among the tantalizing bits of new evidence: Meadows sent an email on Jan. 5 stating that the National Guard would be present at the Capitol the next day to “protect pro-Trump people,” according to the committee.

The revelation of this and Meadows’ other communications was mentioned late Sunday in the committee’s resolution recommending to hold Meadows in criminal contempt.

It’s unknown to whom Meadows sent the National Guard email. The committee’s resolution doesn’t provide a lot of detail on it.

The Jan. 6 panel is slated to forward the recommendation for Meadows (who meanwhile has filed a lawsuit against the committee and House Speaker Nancy Pelosi (D-CA)) to the House for a vote today.

Former New Jersey Gov. Chris Christie (R) told ABC News that the events leading up to the Jan. 6 attack on the Capitol were “driven from the top.”

Said Christie: “All things that you see were driven from the top. The president made it very clear that he did not want to concede the election… C team players get in there and they tell the boss what he wants to hear.”

Colorado Gov. Jared Polis (D) told Colorado Public Radio that Covid-19 vaccines spell “the end of the medical emergency” and he will not implement a statewide mask mandate in response to the Omicron variant.

Said Polis: “You don’t tell people to wear a jacket when they go out in winter and force them to wear it. If they get frostbite, it’s their own darn fault. If you haven’t been vaccinated, that’s your choice. I respect that. But it’s your fault when you’re in the hospital with Covid.”

He added: “The data we have so far shows that the vaccines do hold up well against the omicron variant. Obviously, if that changes, we want to look at what other techniques we could use to reduce the spread of the virus.”

New York Times: “As the coronavirus pandemic approaches the end of a second year, the United States stands on the cusp of surpassing 800,000 deaths from the virus, and no group has suffered more than older Americans. All along, older people have been known to be more vulnerable, but the scale of loss is only now coming into full view.”

President Biden is expected to sign an executive order on Monday calling for federal agencies to improve their websites to deliver a better customer experience.

“The Biden administration is set to release a federal strategy Monday to implement an ambitious plan to build 500,000 charging stations for electric vehicles across the country and ultimately transform the U.S. auto industry,” the AP reports.

Former RNC Chairman and Montana Gov. Marc Racicot (R) “warned that fidelity is in jeopardy in America, not only in regard to the state and national constitutions, but to the country’s spirit as well,” the Helena Independent Record reports.

“He also said there are serious warning signs that the U.S. Constitution and republic are at risk.”

Said Racicot: “The most probable way for our republic to vanish is through a lack of honor and fidelity. Not surprisingly that is precisely what is required by our constitutional oath of office.”

He added: “I don’t want to preach, so I am hopeful that I won’t appear pretentious, but with all that has dramatically changed with the political and social fabric of our lives in this last decade and a half – much for the worse – in my judgment, I would confess that I sometimes feel like I am diagonally parked in a parallel universe.”

Said Trump: “I don’t think Bibi ever wanted to make peace. I think he just tapped us along. Just tap, tap, tap, you know?”

“Democrats are hoping a year-end cliff with 35 million families on the line can finally shake a deal loose on President Joe Biden’s marquee bill,” Politico reports.

“Preserving the party’s expanded child tax credit, which delivers monthly checks to most families with children, has been a central tenet of Biden’s social safety net bill from the start. But months of grueling negotiations have forced Democrats right up against the Dec. 31 deadline that could blot out one of their biggest political wins this year.”

“Vice President Kamala Harris on Monday announced $1.2 billion in commitments from international businesses to support the economies and social infrastructure of Central American nations, as she works to address what the White House terms the ‘root causes’ of migration to the United States,” the AP reports.

“Harris was tapped in March by President Joe Biden to work to counter the social, economic and political forces that drive migrants and asylum seekers to the U.S., including many who cross the U.S.-Mexico border illegally.”

“There is nothing about this job that is supposed to be easy. If something is coming to me, it’s because it needs to be addressed and because, by definition, it’s not going to be easy. If it was easy, it would have been handled before it comes to me.”  — Vice President Kamala Harris, quoted by the San Francisco Chronicle.

“At least one person has died from the omicron variant, the British Prime Minister Boris Johnson said on Monday as he urged Britons to increase their protection with a booster shot,” the Washington Post reports,

Said Johnson: “I think the idea that this is somehow a milder version of the virus, I think that’s something we need to set on one side and just recognize the sheer pace at which it accelerates through the population.”

The New York Times quotes Johnson: “No one should be in any doubt: There is a tidal wave of Omicron coming,”

“None of the military personnel involved in a botched drone strike in Kabul, Afghanistan, that killed 10 civilians will face any kind of punishment after Defense Secretary Lloyd Austin approved recommendations from two top commanders,” the New York Times reports.