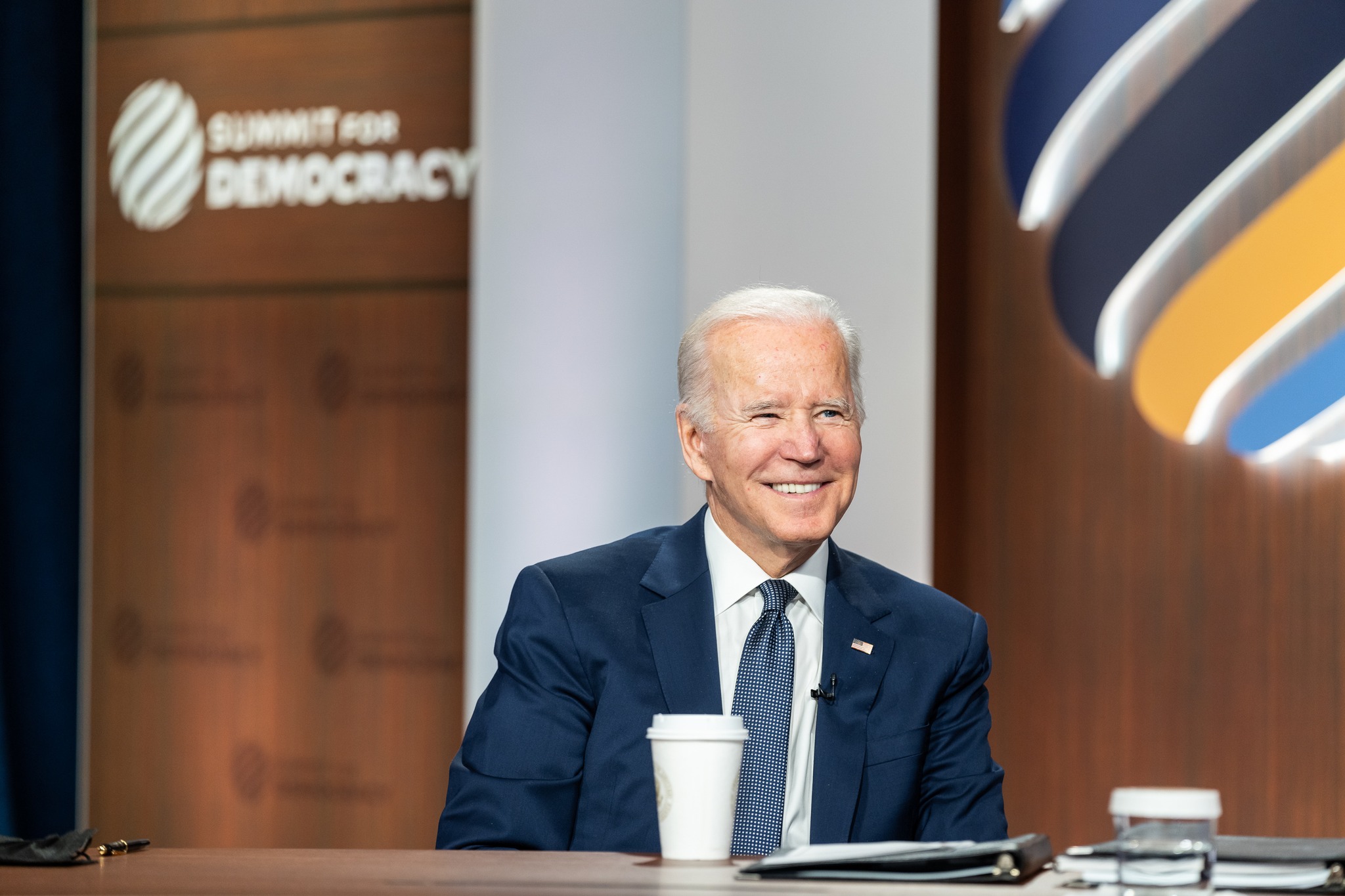 Wall Street Journal: “Covid-19 is surging in many parts of the country in the wake of Thanksgiving, with Christmastime gatherings on the horizon.”

“Some 35 states have higher seven-day averages for new cases than they did before Thanksgiving.”

“Last year on Christmas Eve, advisers to then-President-elect Joe Biden held an emergency meeting to discuss a scenario that felt increasingly likely: the emergence of a mutant strain of the coronavirus that would evade vaccine protection,” NBC News reports.

“At the time, the alarm bells were ringing for the alpha variant, which quickly faded. But the concerns led Biden’s team to lay the groundwork for the plan they are now beginning to implement as researchers work to determine how much of a threat the omicron variant may pose.”

“While there are still more questions than answers about the variant, Biden administration officials are prepping for a litany of worst-case scenarios and daunting questions, such as: What would happen if it turned out more than 200 million Americans needed to be revaccinated?”

“An early estimate published yesterday by the UK found that two doses of the Pfizer vaccine are only about 30% effective against symptomatic infection with Omicron, and the AstraZeneca vaccine isn’t effective at all,” Axios reports.

“A booster shot of the Pfizer vaccine, however, increases effectiveness to 70-75%.”

“In a new approach to gun control inspired by Texas’s controversial approach to banning most abortions, California Gov. Gavin Newsom on Saturday announced that his administration will work to make it easier for private citizens to sue people who sell assault rifles and parts for untraceable ghost guns,” the San Francisco Chronicle reports.

“State officials will aim to craft a measure that would allow residents to seek damages of at least $10,000, plus legal fees, against anyone who manufactures, distributes or sells an assault weapon or ghost gun kit in California.”

Said Newsom: “If states can now shield their laws from review by the federal courts that compare assault weapons to Swiss Army knives, then California will use that authority to protect people’s lives, where Texas used it to put women in harm’s way.”

The Washington Post notes Wallace did not elaborate on why he had decided to leave Fox after 18 years except to say that he wanted to “go beyond politics.”

Wallace will anchor a new show on the network’s upcoming streaming service, CNN+.

“The top diplomats for the world’s wealthiest large democracies warned Russia on Sunday of ‘massive consequences’ and ‘severe costs’ should it invade Ukraine or continue military aggressions near its border,” the New York Times reports.

“The foreign ministers for the Group of 7 urged Russia to pull back from the tense border standoff and made clear that any effort to negotiate or otherwise avoid confrontation would be welcome.”

“President Biden faces a dilemma as the United States prepares for European security negotiations with Moscow amid the threat of a new Ukraine invasion: How much should Washington accommodate Russian President Vladimir Putin — and would any plausible concessions be enough for him to stand down?,” the Washington Post reports

“Those questions will be top of mind for U.S. officials and their European allies, who are in the early stages of organizing talks with the Russians on the myriad complaints Putin has made about Ukraine, NATO and a European security environment he says is overly threatening to Moscow.”

“Putin’s demands, and whether to make any concessions, are already testing the unity of the 30-country NATO alliance.”

“European leaders and scientists warned Friday that the omicron variant could become dominant in some countries startlingly soon, overtaking the delta variant, which has remained the most common version of the virus globally for months,” the Washington Post reports.

Said Clyburn: “It may require some jiu-jitsu, but that’s not beyond the Senate to do that.”

Said Graham: “What I’m worried about is that for four months the Republican Senate said we would not lift a finger to help the Democrats raise the debt ceiling. We would make them use reconciliation.”

He added: “At the end, we did not make them use reconciliation, which changed the rules of the Senate in a House bill. I don’t like that a lot… What we did is promised one thing and delivered another.”

Sen. Lindsey Graham (R-SC) said Democrats must “quit lying” about the cost of the Build Back Better Act and called for the House to revote on the massive social spending package, The Hill reports.

“A single top secret American strike cell launched tens of thousands of bombs and missiles against the Islamic State in Syria, but in the process of hammering a vicious enemy, the shadowy force sidestepped safeguards and repeatedly killed civilians,” the New York Times reports.

“The unit was called Talon Anvil, and it worked in three shifts around the clock between 2014 and 2019, pinpointing targets for the United States’ formidable air power to hit: convoys, car bombs, command centers and squads of enemy fighters.”

“But people who worked with the strike cell say in the rush to destroy enemies, it circumvented rules imposed to protect noncombatants, and alarmed its partners in the military and the C.I.A. by killing people who had no role in the conflict: farmers trying to harvest, children in the street, families fleeing fighting, and villagers sheltering in buildings.”

“President Biden and his top aides are struggling to bridge the gap between the economy they want to celebrate and the one that has left many Americans anxious and frustrated, as a record-setting recovery collides with prolonged inflation and an ongoing pandemic that has left consumers deeply pessimistic,” the New York Times reports.

“The challenge begins with a disbelief of sorts among Mr. Biden’s economic advisers. They insist the job market, with a 4.2 percent unemployment rate, has never been better, delivering wage gains for lower-paid workers that Mr. Biden believes will help lift more people into the middle class. They say those benefits will endure for years, even once inflation, which last -month accelerated at its fastest pace in 40 years, cools down.”

“The struggle is also entwined with Mr. Biden’s fight against Covid. Administration officials say that the anxiety voters are expressing to pollsters is less about the economy and the president’s handling of it and more an expression of pent-up frustration with a pandemic that has persisted for nearly two years.”

Washington Post: “Rising prices throughout the economy threaten to swamp the White House’s legislative agenda during a critical moment for President Biden, as persistently high inflation spooks both voters and lawmakers.”

Axios: “Inflation is bursting almost everywhere — a warning that rapid price spikes may stick around.”

“Florida Gov. Ron DeSantis’ fight with the Biden administration over immigration has led to a $1.6 million state-funded border mission in Texas, a lawsuit against the federal government and an executive order enlisting the state’s law enforcement agency to collect information on ‘potential illegal immigrants’ relocated to Florida by the federal government,” the Miami Herald reports.

“Now, the Republican governor wants $8 million to create a new program that would allow the state to contract with private companies to transport ‘unauthorized aliens’ out of Florida.”

“A retired U.S. Army colonel who circulated a proposal to challenge the 2020 election, including by declaring a national security emergency and seizing paper ballots, said that he visited the White House on multiple occasions after the election, spoke with President Donald Trump’s chief of staff ‘maybe eight to 10 times’ and briefed several members of Congress on the eve of the Jan. 6 riot,” the Washington Post reports.

“Phil Waldron, the retired colonel, was working with Trump’s outside lawyers and was part of a team that briefed the lawmakers on a PowerPoint presentation detailing ‘Options for 6 JAN.’”

David Graham: “One of the emblematic phenomena of Donald Trump’s presidency was the weeks (or sometimes fortnights) of chaos, when it seemed like the administration was struck by a new crisis every day, like watching a Wile E. Coyote supercut, except occasionally with real ordnance.”

“Trump is out of the White House, and those weeks of utter turmoil left when he did, but former White House Chief of Staff Mark Meadows is having one of those stretches all on his own. That isn’t the only way Meadows has found that he can’t escape the past. Through his travails over the past two weeks, Meadows has learned the hard way that Trump is still the king—and that even modest distancing from him won’t be tolerated.”

“Former White House trade adviser Peter Navarro has refused to comply with a subpoena for documents related to the Trump administration’s response to the coronavirus, saying the former president ordered him not to,” Reuters reports.

Washington Post: “The showdown with Navarro is the first time a witness has rebuffed a subpoena issued by the select subcommittee on the coronavirus crisis amid attacks from Trump and his allies that the probe is politically motivated.”

“No information has been available for three weeks about the location or condition of Washington state Sen. Doug Ericksen (R), who was reportedly being treated for Covid-19 at a Florida hospital after testing positive for the virus in El Salvador,” the Bellingham Herald reports.

“Calls to Ericksen have not been returned recently, leading to public speculation about his condition.”

Daily Beast: “Ericksen has been a vocal opponent of Covid restrictions and mandates, saying late last year he would introduce a bill opposing vaccine mandates. It’s unknown if he was vaccinated.”