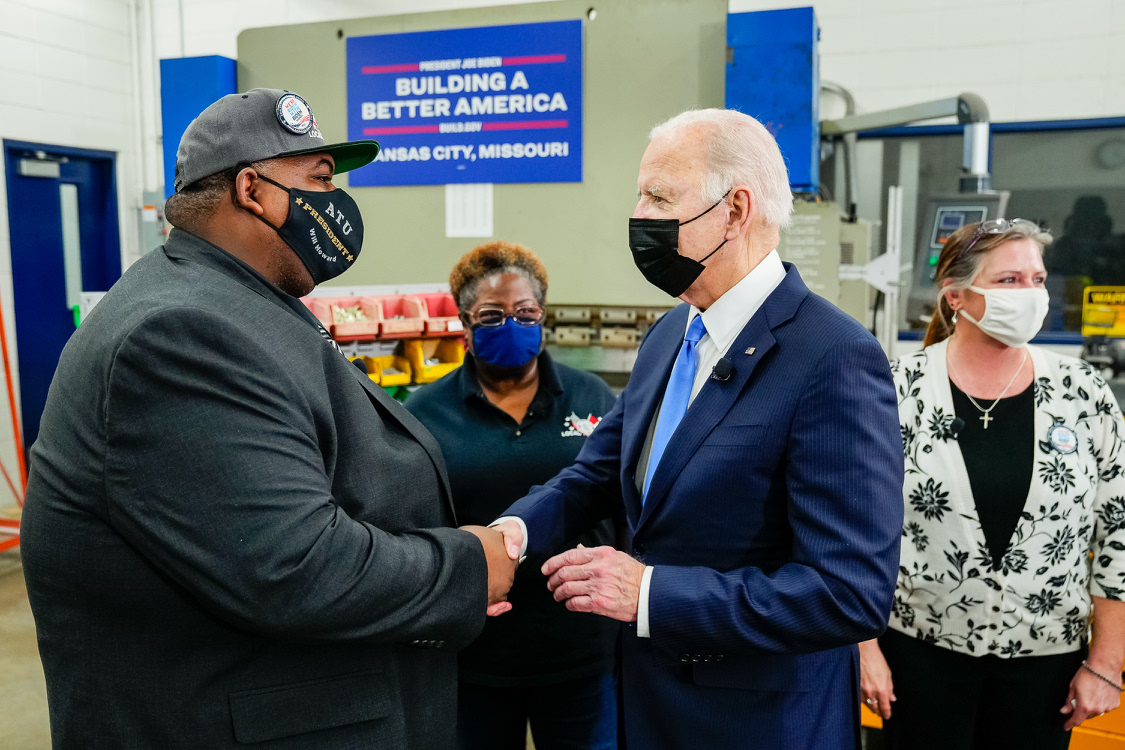 Forbes: “A 10-month-long review of Wisconsin’s 2020 election conducted by a conservative group in the state found no signs of widespread or significant election fraud, according to a new report of its findings, further disproving continued baseless allegations of election fraud as the battleground state undergoes a contentious partisan election audit.”

NEVADA PARTY REGISTRATION. Nevada Independent: “More than two and a half times as many Democrats have switched their voter registrations to Republicans as vice-versa during the last three months, a statistic with ominous portents for Democratic candidates.”

“The numbers since September also show that one and a half times as many Democrats switched to nonpartisan as did Republicans – numbers also reflected in how many major party voters would rather be members of ‘The Jedi Party’ or some other minor or essentially nonexistent party.”

Jon Ralston: “Yes, it’s early and only three months of data. But if this pattern continues well into 2022, it could presage a red wave here.“

PENCE 2024. “There were all the trappings of a day on the presidential campaign trail: a fundraiser, schmoozing with local activists, holiday parties and a visit to a local bakery, where the potential candidate posed for pictures and bought a slice of cake,” the AP reports.

“But former Vice President Mike Pence insisted his tightly scheduled swing through New Hampshire on Wednesday was simply focused on next year’s midterms, when control of Congress is at stake.”

Said Pence: “To be honest with you, all of my focus is on 2022 because I think we’ve got a historic opportunity for not just a winning election, but a realignment election. So I’m dedicating all of my energy to the process of really winning back the Congress and winning statehouses in 2022. And then in 2023, we’ll look around and we’ll go where we’re called.”

“William Hartmann, one of two Republican election officials from Michigan who initially refused to certify the results of the 2020 presidential election in Wayne County, where Joe Biden had trounced Donald Trump, died on Nov. 30 at a hospital near Detroit,” the New York Times reports.

“About two weeks before Mr. Hartmann’s death, which was confirmed by the Michigan Republican Party, his sister, Elizabeth Hartmann, wrote on Facebook that he was ‘in ICU with Covid pneumonia and currently on a ventilator.’”

“Mr. Hartmann had been outspoken in his opposition to Covid vaccines.”

Reuters: “The panel in Spalding, a rural patch south of Atlanta, is one of six county boards that Republicans have quietly reorganized in recent months through similar county-specific state legislation. The changes expanded the party’s power over choosing members of local election boards ahead of the crucial midterm Congressional elections in November 2022.”

“The unusual rash of restructurings follows the state’s passage of Senate Bill 202, which restricted ballot access statewide and allowed the Republican-controlled State Election Board to assume control of county boards it deems underperforming.”

OHIO THIRTEENTH CD. Attorney Shay Hawkins announced Wednesday that he would seek the Republican nod for the new 13th District, a suburban Cleveland and Akron seat that Joe Biden narrowly took 50-49 under the GOP’s newly-drawn gerrymander. Hawkins will take on Trump-backed former White House aide Max Miller, a self-funder who ended September with $980,000 on-hand, in the primary.

Hawkins, who would be the first African American Republican to represent Ohio in Congress, previously worked as a congressional aide before challenging Democratic state Rep. Phil Robinson in 2020. Hawkins ended up losing 51-49, a close result that Cleveland.com says left local GOP leaders impressed.

No notable Democrats are currently running here, but that may be about to change. State Rep. Emilia Sykes, who had the unenviable task of serving as a Democratic member on the GOP-dominated sham bipartisan redistricting commission (Team Blue’s other commissioner was her father, state Sen. Vernon Sykes), also said Wednesday that she was stepping down as minority leader this month. Sykes said she was “considering any and all options to continue to serve my community, whether that’s in elected office or as a private citizen,” but plenty of Ohio politicos think she’s planning to run for the 13th District.

NEW YORK THIRD CD. Newsday reports that former North Hempstead Town Supervisor Jon Kaiman is considering running to succeed Rep. Tom Suozzi, a fellow Democrat who is leaving to run for governor. Kaiman sought this Long Island seat when it opened up in 2016 but ended up getting badly outspent by Suozzi and two other intra-party foes; Suozzi ultimately won the nomination with 36%, while Suffolk County Legislator Steve Stern and Kaiman were well behind with 22% each.

As the Boston Globe writes, Tran lost re-election in 2020 months after he “was stripped of his leadership post within the Senate GOP caucus and, in an extraordinary step, barred from interacting with his staff except through official e-mails after fellow senators accused him of breaking Senate rules and potentially state law.” The Senate Committee on Ethics later found evidence he’d directed his legislative staff to do campaign work for him, a report Tran called “libelous.” The allegations were turned over to state authorities, who this week would neither confirm nor deny that they are investigating Tran.

Despite all of this, though, Tran hardly seems done with politics: An advisor for the former senator told the paper that he would likely decide whether or not to run after the end of the year.

KENTUCKY THIRD CD. State Rep. Josie Raymond has announced that she won’t run to succeed her fellow Democrat, retiring Rep. John Yarmuth, in this Louisville district. Another Democrat, state Rep. McKenzie Cantrell, has meanwhile filed to run for re-election, but she says she could still run for Congress depending on how redistricting shakes out.

On the Republican side, Secretary of State Michael Adams has taken himself out of contention. No major Republicans have launched any campaigns here, but that would certainly change if the GOP legislature makes use of its veto-proof majorities to gerrymander what is currently a safely blue constituency.

ILLINOIS THIRD CD. State Rep. Delia Ramirez on Wednesday became the second major Democrat to launch a bid for the new 3rd District, a 70-28 Biden seat that the Democratic legislature drew up to be the state’s second plurality-Latino constituency. Chicago Alderman Gilbert Villegas was already running in the June primary, but while others have plenty of time to jump in before the March filing deadline, state Sen. Omar Aquino took his own name out of contention by endorsing Ramirez.

GEORGIA SEVENTH CD. State Rep. Donna McLeod announced Tuesday that she was joining the May Democratic primary for the new Gwinnett County-based 7th District, a move that will put her in conflict with two Democratic incumbents in the Atlanta suburbs. McLeod will face freshman Rep. Carolyn Bourdeaux, whose current 7th District makes up the majority of this new safely blue constituency, as well as Rep. Lucy McBath, who decided to run here after the GOP’s gerrymander turned her 6th District dark red. A runoff would take place in July if no one wins at least 50% of the vote.

​​McLeod last month previewed her arguments for why voters should fire both congresswomen when she declared, “Neither lady has lived in Gwinnett County like I have for 21 years.” ​​McLeod said that, while she saw McBath as “a fine lady,” she “has no idea what Gwinnett County has been fighting for.” (None of Gwinnett County is located in McBath’s current constituency.)

​​McLeod, meanwhile, focused far less on geography than ideology when she laid out why it was time to part ways with Bourdeaux, who already represents most of Gwinnett County. She took issue with that congresswoman for being one of the nine renegade Democratic moderates who threatened to derail Biden’s Build Back Better agenda if they didn’t get a vote on Congress’ bipartisan infrastructure bill first. “Pouring concrete and asphalt is no more important than universal pre-K,” the state representative argued.

​​McLeod, by contrast, argued that she had been part of the movement that helped transform her county from a Republican bastion into a Democratic-friendly area, saying, “It took decades for Gwinnett County to become a force to be reckoned with in the Democratic Party and that took a lot of work. I was there from day one.” ​​McLeod herself narrowly lost a 2016 race for the state House but decisively won two years later and kept her new seat blue in 2020.

OREGON SIXTH CD. Republican state Rep. Ron Noble announced this week that he would campaign for the new 6th District, a 55-42 Biden constituency that includes the state capital of Salem and other parts of the mid-Willamette Valley. Noble, who previously served as the police chief of the community of McMinnville, used his launch to pitch himself as a bipartisan figure, which is not usually the kind of argument that wins GOP primaries.

Noble joins a May nomination fight that includes Air Force veteran Angela Plowhead; Army veteran Nate Sandvig, who was previously running for the 5th District; Amy Ryan Courser, who was Team Red’s 2020 nominee in the 5th District; and Dundee Mayor David Russ. Sandvig struggled with fundraising before he switched races, and it remains to be seen if he or any of Noble’s other opponents can run a credible campaign.

Casha is a longtime fixture in North Jersey politics who currently represents Morris County on the New Jersey Republican State Committee, but he hasn’t had much luck getting himself elected to higher office. He ran in a 2007 primary for a state Assembly seat but lost a close primary to Jay Webber, who went on to lose to Sherrill in 2018.

Casha also campaigned to get appointed to a vacant seat in the Assembly in 2012, but he lost the party nominating convention. He waged a brief bid against Sherrill last cycle but dropped out after tax attorney Rosemary Becchi reached a deal with power brokers that resulted in her running here rather than against party favorite Tom Kean Jr. in the neighboring 7th District.

Rizzo, meanwhile, is a real estate developer turned pastor who attracted some attention earlier this year when he announced that his gubernatorial campaign raised enough money to qualify for public financing. The state’s Election Law Enforcement Commission, though, turned him down because his application was submitted late and without requisite information, a decision that was upheld in court. Rizzo, who is a member of the Trump National Golf Club, ultimately lost the May primary 49-26 to Jack Ciattarelli.