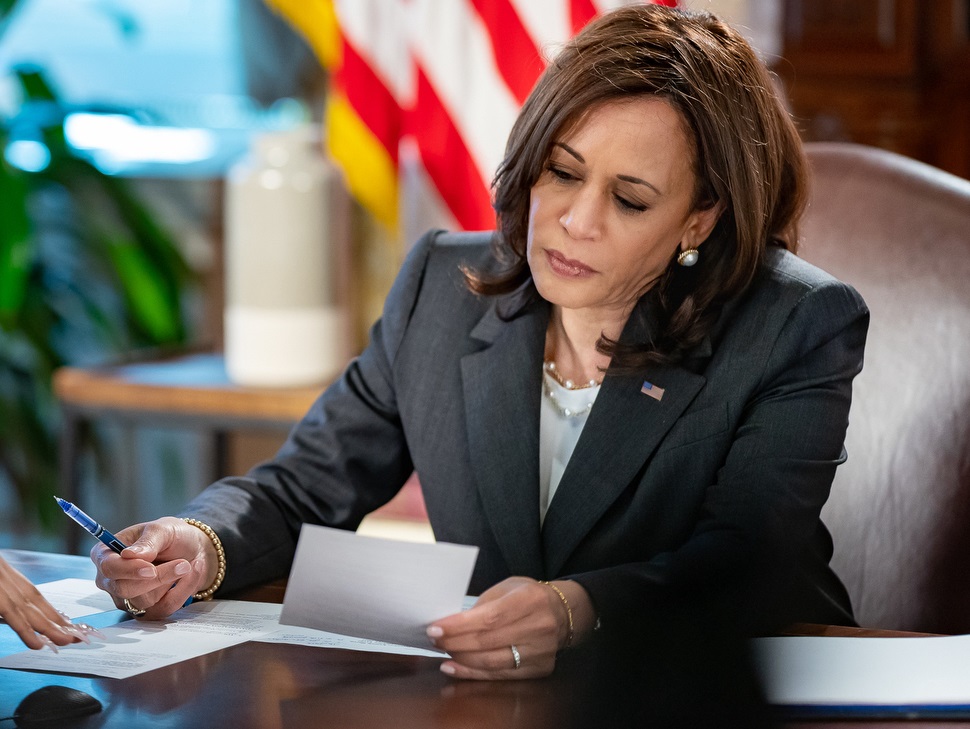 “The House on Thursday passed a sweeping package of constraints on presidential power, which Democrats framed as a response to Donald Trump’s norm-busting presidency and Republicans unanimously opposed for the same reason,” the New York Times reports.

“By a nearly party-line vote of 220 to 208, the House approved the Protecting Our Democracy Act, which would impose new curbs on executive power. Proponents of tighter government ethics have long sought many of the measures, and Republican have supported them, but they have been recast as partisan issues because of their association with Mr. Trump.”

Reuters: “The bill will now head to the Senate, where it is not expected to surpass the chamber’s 60-vote threshold to move forward.”

“That compares with 6.9 million people who are unemployed but say they want to work.

“Does this sound like a healthy economy to you?”

“In recent weeks, economists and pundits have been asking why Americans feel grouchy about the economy when many indicators — like G.D.P. growth, stock prices and the unemployment rate — look strong.”

China has warned countries who have announced a diplomatic boycott of the Beijing Winter Olympics that they “will pay the price for their mistaken acts,” the BBC reports.

“An editorial in a Chinese state-run news website has suggested Communist party members are obliged to have three children for the good of the country, as Beijing seeks to address plummeting birthrates,” The Guardian reports.

“The editorial, which was first published last month, went viral this week and drew sharp reaction from Chinese internet users, with millions of shares, views and comments. As the wave of reaction grew, the original article disappeared from the website.”

Robert F. Kennedy, Jr. writes in the San Francisco Chronicle that Sirhan Sirhan did not assassinate his father, and called on California Gov. Gavin Newsom to release Sirhan from prison.

“At least 12 major U.S. cities have broken annual homicide records in 2021 — and there’s still three weeks to go in the year,” ABC News reports.  Said Philadelphia Mayor Jim Kenney: “It’s terrible to every morning get up and have to go look at the numbers and then look at the news and see the stories. It’s just crazy. It’s just crazy and this needs to stop.”

Rep. Lauren Boebert (R-CO) shared a photo of her children wielding rifles in front of their Christmas tree late Tuesday, the latest gun-themed holiday photo released by Republicans in the wake of a deadly high school shooting, the Daily Best reports.

Republican legislative leaders in Indiana “announced they are canceling their one-day legislative session originally planned for Monday after fierce backlash to their proposal to severely limit private companies’ abilities to mandate vaccines,” the Indianapolis Star reports.

Washington Post: “Nearly two years into a coronavirus pandemic that has killed more than 5 million people, every country, including the United States, remains dangerously unprepared to respond to future epidemic and pandemic threats, according to a report released Wednesday assessing the efforts of 195 countries.”

“Efforts to revive the Iran nuclear deal have been hauled back from the brink of collapse as Tehran revised its stance after pressure from Russia and China and clear warnings that the EU and the US were preparing to walk away,” The Guardian reports.  Meanwhile, the US military commander for the Middle East told the Financial Times he has a “very robust range of military options” to deter Iran.

New Yorker: “A trove of unreleased documents reveals a dispiriting record of misjudgment, hubris, and delusion that led to the fall of the Western-backed government.”

“Health and Human Services Secretary Xavier Becerra, a former attorney general of California and 12-term member of Congress, took office in late March. But since he was sworn in, he has yet to appear at a White House or Covid media briefing,” NBC News reports.

“Conversations with six former senior health policy officials from both Democratic and Republican administrations, as well as three people closely familiar with the agency’s activities, reveal that they are mystified about why Becerra’s leadership has been, as several of them put it, ‘invisible.’”

David Brooks: “What passes for ‘conservatism’ now, however, is nearly the opposite of the Burkean conservatism I encountered then. Today, what passes for the worldview of ‘the right’ is a set of resentful animosities, a partisan attachment to Donald Trump or Tucker Carlson, a sort of mental brutalism. The rich philosophical perspective that dazzled me then has been reduced to Fox News and voter suppression.”

“I recently went back and reread the yellowing conservatism books that I have lugged around with me over the decades. I wondered whether I’d be embarrassed or ashamed of them, knowing what conservatism has devolved into. I have to tell you that I wasn’t embarrassed; I was enthralled all over again, and I came away thinking that conservatism is truer and more profound than ever—and that to be a conservative today, you have to oppose much of what the Republican Party has come to stand for.”