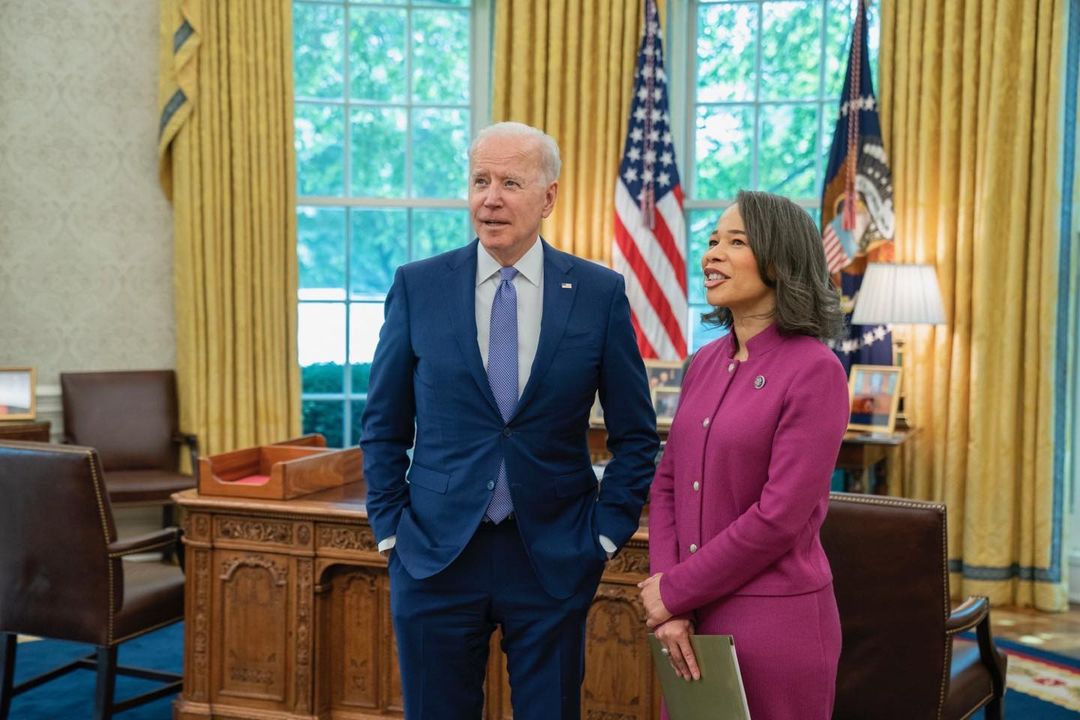 A new CNBC poll finds President Biden’s overall approval rating stabilized at a low level of 41%, about the same level as former President Donald Trump’s, compared to 50% who disapprove.

But Biden’s approval rating on handling the economy and dealing with the coronavirus both declined.

Harry Enten notes that while voters believing Donald Trump lost the 2020 presidential election because of fraud may have stopped people from turning out for the Georgia Senate runoffs in early 2021, this belief appears to be correlated with a greater likelihood of voting in the 2022 midterms.

Data for Progress: “Progressives often argue Democratic insiders are too moderate or conservative, and that the personal political preferences of these elite actors prevents the party from embracing a transformative progressive change.”

“However, our new analysis suggests that political elites are more supportive of a wide array of progressive policies than the average likely voter.”

“Sawant has gained ground two days in a row, overcoming a 53% lead held by the recall effort on Tuesday.”

NEW YORK GOVERNOR / ATTORNEY GENERAL. New York Gov. Kathy Hochul (D) said that “this is a very bad day for Donald Trump and the NRA” when commenting on New York Attorney General Letitia James’ (D) decision to run for reelection and drop out of the Democratic governor’s race.

The few polls we’d seen before James dropped out showed her to be Hochul’s main threat in the June primary, though the governor still held a clear lead. A recent survey from Siena College showed Hochul beating the attorney general 36-18, with New York City Public Advocate Jumaane Williams in third with 10%; New York City Mayor Bill de Blasio (who hasn’t actually announced a bid yet) and Rep. Tom Suozzi were each well behind with 6%.

James herself didn’t give an explanation for why she was exiting the gubernatorial race other than her belief that she “must continue my work as attorney general,” but there were signs that her campaign for the top job wasn’t going smoothly. In a Politico story published one day before James dropped out, reporter Bill Mahoney noted that she had done little campaigning since her launch and had conducted just one TV or radio interview. The attorney general also had been reluctant to explain why voters should replace Hochul with her.

Newsday’s Yancey Roy went on to relay Thursday that party insiders said James was having trouble raising money. An unnamed James advisor denied this to Politico, though, and instead said, “I think she really felt she wasn’t feeling that campaign and was excited about some stuff she was doing in the [attorney general]’s office. If that’s where you end up, then it really doesn’t make sense to run.”

It’s possible James’ absence will benefit one of Hochul’s other foes or entice someone else to get in. Williams, who like James is an African American candidate from Brooklyn, in particular may have the most to gain, especially if he can consolidate voters who view Hochul as unacceptably moderate.

However, plenty of observers instead interpreted James’ departure as a sign of just how well-situated the governor is. Ross Barkan, for example, noted that Hochul had amassed an $11 million war chest and won over key establishment figures, which would have made it hard for James or anyone else to defeat her next year.

James’ decision to run for re-election, meanwhile, transforms what was shaping up to be a crowded primary to run one of the nation’s most high-profile attorney general offices. State Sen. Shelley Mayer quickly exited the race while Maria Vullo, the former superintendent of the Department of Financial Services, said she would continue on. Hochul, for her part, endorsed James hours after her now-former rival switched races.

STUPID NEW YORK CITY DECISIONS. The New York City Council approved a measure “that will allow immigrants who are not U.S. citizens to vote for mayor and other key municipal positions, a historic move that is igniting threats of legal challenges from Republicans and hopes from Democrats that other cities will follow suit,” the Washington Post reports.

With this action, they’ve handed Republicans an issue to bash Democrats that’s perhaps even more politically potent than “defunding the police.” Sen. Tom Cotton has already taken the bait.

NORTH CAROLINA U.S. SENATOR. Former Rep. Mark Walker (R-NC) will remain in North Carolina’s U.S. Senate race for the remainder of the year and spend the next few weeks mulling a run for a House seat, despite former President Donald Trump urging him to bow out of the 2022 Senate contest, the AP reports.

WISCONSIN U.S. SENATOR. Republican incumbent Ron Johnson said Thursday that he’d announce his 2022 plans in the “next couple weeks,” though as with all things RoJo related, we shouldn’t take him at his word. When asked on Nov. 10 about his timeline, Johnson said that “[i]t’ll all be revealed in the next few weeks.”

KENTUCKY GOVERNOR. On Wednesday, former Ambassador to the United Nations Kelly Craft reaffirmed her interest in seeking the 2023 Republican nomination to take on Democratic Gov. Andy Beshear. Craft has long been one of the state and national GOP’s most prominent donors, and Donald Trump rewarded her by naming her ambassador, first to Canada and then to the UN.

Beshear already faces a Republican opponent in state Auditor Mike Harmon, who launched his campaign all the way back in July. State Sen. Max Wise also talked about running back in the summer, and there’s more than enough time for others to get in.

Walz posts a positive 47-39 favorable image, while each of his would-be foes starts out with little name recognition.

LOUISIANA GOVERNOR. Rep. Mike Johnson, who is the fourth ranking Republican in the House, took his name out of contention for the 2023 open seat race for governor on Thursday.

TRUMP: So we have some big endorsements coming.

TRUMP: I understand that. Okay, some people feel that.

GEORGIA GOVERNOR. “Former Sen. David Perdue (R) wasn’t planning to jump in the race for Georgia governor so soon. But Stacey Abrams (D) scrambled his schedule when she made the leap last week, presenting the Republican with a gut-check moment,” the Atlanta Journal Constitution reports.

Said Perdue: “When Stacey Abrams announced, it forced my hand, honestly. I was conflicted The last thing I want to do is run a campaign, but on the other hand, I can’t see the state go down this road that Stacey Abrams wants to go down. Kemp has failed to unite the party, and he can’t defeat her.”

FLORIDA GOVERNOR. The Florida Commission on Ethics said Wednesday it had found probable cause to believe that state Agriculture Commissioner ​​Nikki Fried, who is one of the three major Democrats running for governor, broke state law by failing to properly disclose her income. Fried’s campaign responded by casting the ruling as a partisan attack and pledged to challenge it in court.

Just before she launched her campaign against Republican Gov. Ron DeSantis in June, Fried submitted amendments to her 2017 and 2018 disclosure forms to reveal she’d made $350,000 lobbying for a plant farm that went on to be acquired by a medical marijuana company. Republicans quickly filed an ethics complaint against Fried, whose 2018 win made her Florida’s only statewide Democratic official.

Fried’s team says she made these changes to correct unintentional errors and charged that her GOP detractors had filed a “politically inspired nuisance complaint.”

OREGON FOURTH CD. Labor Commissioner Val Hoyle still has the Democratic primary to herself following longtime Rep. Peter DeFazio’s retirement announcement last week, but a few others have expressed interest in getting in. Both state Sen. Sara Gelser Blouin and state Rep. Marty Wilde told Capital Chronicle last week that they were considering, while the story mentioned Coos County Commissioner Melissa Cribbins as a possibility. State Rep. Julie Fahey, though, quickly took her name out of contention.

OR-04: State Sen. James Manning and Airbnb executive Andrew Kalloch each tell Willamette Weekly they’re considering entering the race for this open seat. Manning says he plans to decide in the next week but sounds inclined to remain in the legislature, declaring, “I’m not a person who walks away, and there is the old saying about a bird in the hand.”

Kalloch, who moved to this district last year from Portland after previously living in New York City, appears more enthusiastic about a run to succeed Democratic Rep. Peter DeFazio, saying, “I anticipate being part of it.” Kalloch, who is a former staffer in the New York City comptroller’s office, says he’ll make his decision over the holidays.

GEORGIA THIRTEENTH CD. South Fulton City Councilor Mark Baker this week filed FEC paperwork for a potential Democratic primary bid against Rep. David Scott, who has long been one of the most conservative members of the caucus, in this safely blue seat. Scott unexpectedly took just 53% of the vote in last year’s primary against three underfunded foes, which was almost enough to force him into a runoff.