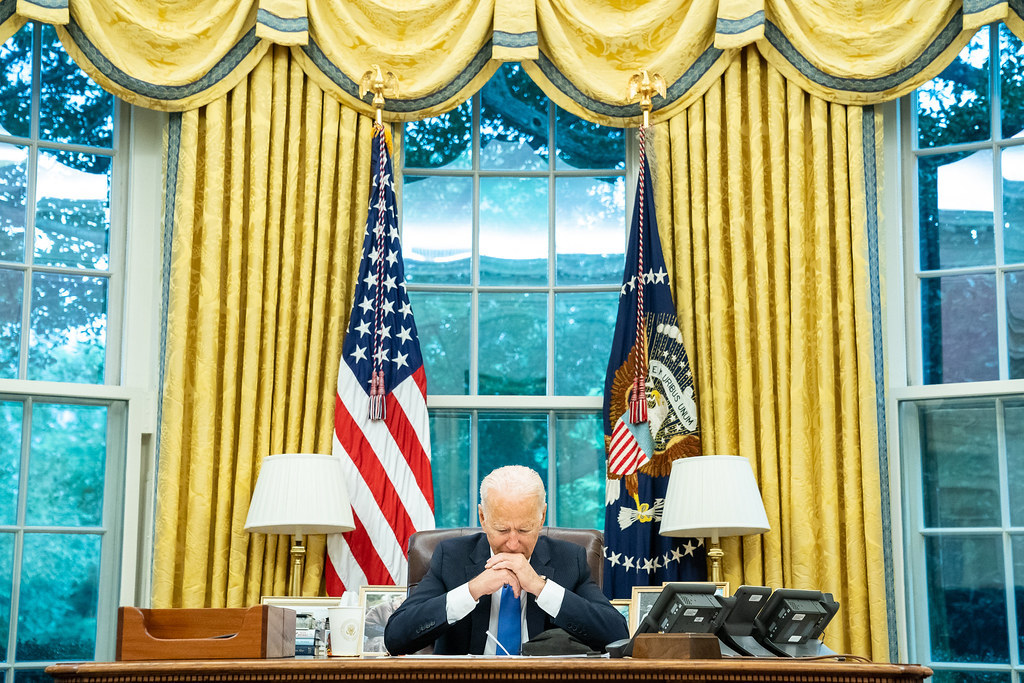 Punchbowl News on the Build Back Better Bill: “They’re just not ready. Here’s a simple yet inexorable problem Democrats have yet to overcome — there’s no bill yet! We haven’t seen the full legislative text of the Build Back Better Act from Senate Democrats in the three weeks since the House approved its version of the bill. Next week, Senate Democrats and Republicans will take elements of the package to the parliamentarian to battle over immigration and other contentious priorities.”

“Once they’re done with that, Schumer still needs to get agreement within his caucus. For example, if the immigration provisions approved by the House are rejected by the parliamentarian, do they try to rework the language to get it back into the package? How long will that take? How many votes will they lose without immigration in the bill? And remember — once the Senate passes its bill, the House has another crack at it. And that will take some time.”

Inflation surged 6.8% in November — even more than expected — to the fastest rate since 1982, CNBC reports.

New York Times: “The rising costs spell trouble for officials at the Federal Reserve and the White House, who are trying to calibrate policy at a moment when the labor market has yet to completely heal from the pandemic, but the risk that price increases could become more lasting is increasing.”

Punchbowl News: “The big question for us — and for Capitol Hill and Washington — is can Democrats pass the Build Back Better Act given these numbers? Will Sen. Joe Manchin (D-WV) — who has been sounding the alarm on inflation — vote for this bill this year? It’s looking less likely. We anticipate Manchin may release a statement on the inflation numbers at some point this afternoon.”

“The White House, meanwhile, is very eager to point out the economists that say that the BBB won’t worsen the inflation outlook. But, for Manchin, this is really not completely dispositive. He is concerned, at least in part, about the optics of passing another multi-trillion dollar spending package in the face of rising costs for West Virginians. Period.”

Meanwhile, President Biden told CNN he doesn’t know if he can get Manchin’s vote with inflation numbers this high but he will be speaking to him early next week.

From the decision: “On the record before us, former President Trump has provided no basis for this court to override President Biden’s judgment and the agreement and accommodations worked out between the Political Branches over these documents.”

An appeal to the U.S. Supreme Court is expected within the next two weeks.

“The House select committee investigating the deadly Jan. 6 attack on the Capitol by a pro-Trump mob issued subpoenas Friday to six individuals involved in the planning of the rally on the Ellipse that preceded the insurrection,” the Washington Post reports.

Former White House chief of staff Mark Meadows provided the House select committee investigating the January 6 riot with text messages and emails that show he was “exchanging with a wide range of individuals while the attack was underway,” CNN reports.

“These communications offer a window into what people were texting to Meadows on January 6, what he was telling them about Trump in real time, and what the former President was doing for those hours while the Capitol was under attack.”

A source familiar with the communications says the texts “may not reflect well” on Trump.

“The Supreme Court on Friday said some lawsuits against Texas’ anti-abortion law — the strictest in the country — can proceed,” Axios reports.

“The court’s decision is not a ruling on the merits of Texas’ law — and leaves the law in place — but it paves the way for the courts to decide whether that law is constitutional.”

Nearly two dozen Republican state lawmakers in Alabama filed a bill mirroring a Texas law banning abortion at six weeks of pregnancy and allowing anyone to sue a woman who has an abortion for $10,000, AL.com reports.

“Democrats, growing increasingly restless over the GOP power play, are urging Schumer to make good on his vow to hold weekend and late-night sessions over the holidays to plow through the dozens of nominees lagging on the Senate floor.”

“The House Select Committee to Investigate the Jan. 6 Attack on the Capitol on Thursday released slides from a PowerPoint calling for former President Trump to declare a national security emergency in order to delay the certification of the results of the 2020 election. The presentation, headlined was referred to in an email provided to the committee by Mark Meadows, the former White House chief of staff who’s had a rough couple of weeks, to say the least,” Rolling Stone reports.

“The revelation is the latest piece of evidence that Trump and his inner circle, including his allies in Congress, were very actively and very aggressively trying to overturn the results of the election, which Trump lost handily.”

“A Donald Trump campaign lawyer wrote two legal memos in the week before the Jan. 6 Capitol attack that claimed then-Vice President Mike Pence had the authority to refuse to count presidential electors from states that delivered Joe Biden the White House,” Politico reports.

“The memos from then-Trump lawyer Jenna Ellis, which contain widely disputed legal theories about Pence’s ability to stop a Biden presidency, underscore Ellis’ promotion of extreme arguments that she promulgated amid Trump’s effort to reverse the election results. Her actions have remained largely below the radar as House investigators probe Trump’s inner circle.”

“Masks will be required as of Monday in all indoor public spaces in New York State that do not require vaccination for entry, Gov. Kathy Hochul announced on Friday, as the state grapples with a spike in coronavirus cases and hospitalizations,” the New York Times reports.

“The new requirement means that shops, restaurants and venues will require patrons to be masked unless their employees check that those entering the premises are fully vaccinated.”

“The chief justice did not ask for a response to the application for emergency relief or refer the application to the full Supreme Court, and he gave no reasons for his ruling. Those were all signs that he viewed the legal question in the case as insubstantial.”

A new YouGov survey in the United Kingdom finds Prime Minister Boris Johnson with an upside down favorability rating, 24% to 66%.

“Boris Johnson is facing a major Conservative rebellion over Covid-19 restrictions next week, as a ‘sulphurous’ mood sweeps through Tory ranks over the UK prime minister’s leadership,” the Financial Times reports.

The Times of London notes Johnson’s party has “slumped to their worst poll rating in 11 months as the prime minister battles on several fronts.”

“With cases of the Omicron variant doubling every three days and the government doing an about-face on restrictions it had long resisted, Britain is bracing for a new coronavirus surge, unsure if it will be a relatively minor event or a return to the dark days of earlier pandemic waves,” the New York Times reports.

“Early evidence in Britain backs up tentative findings elsewhere, notably in South Africa, where the heavily mutated new variant is already widespread: It appears to be the most contagious form of the virus yet, a previous case of Covid-19 provides little immunity to it, and vaccines seem less effective against it. But it also seems to cause less severe illness than earlier variants.”

In his eulogy for the late Sen. Bob Dole, President Biden remembered when Dole angered his party by casting deciding vote to continue Amtrak funding.

Said Biden: “My guess is he was asked why? Why would you do that? He says, ‘It’s the best to get Joe Biden the hell out of here at night.”

“A British High Court ruled Friday that WikiLeaks founder Julian Assange can be extradited to the United States to face charges of violating the Espionage Act,” the Washington Post reports.

Insider: “McConnell’s move makes good on his pledge that Republicans would not vote for a debt ceiling increase, while allowing the party to evade the blame for not reaching a deal, which could result in an economically catastrophic default.”

“But the move has drawn criticism from allies of Trump on the Republican hard right — who favor a scorched earth policy allowing for no compromise with Democrats.”

Robert Shapiro: “While many people are uncomfortable communicating bad news, Democrats have a problem these days talking about good news, especially on the economy.”

“Based on the data, President Biden and the Democratic Congress are set to preside over the strongest two-year performance on growth, jobs, and income in decades—so long as the current cycle of inflation eases, and the Omicron variant does not trigger another round of shutdowns. The future paths of inflation and the pandemic are large and important unknowns—but if they break right, everything else points to a Biden boom through 2022.”

“Donald Trump and Benjamin Netanyahu were the closest of political allies during the four years they overlapped in office, at least in public. Not anymore,” Axios reports.

“The final straw for Trump was when Netanyahu congratulated President-elect Biden for his election victory while Trump was still disputing the result.”

Said Trump: “I haven’t spoken to him since. Fuck him.”

Former Israeli Prime Minister Benjamin Netanyahu responded to an interview in which Donald Trump accused him of disloyalty, saying Israel’s alliance with the U.S. meant “it was important for me to congratulate the incoming president,” Axios reports.

“Ron DeSantis is building a campaign against Joe Biden — and he’s going to make the president pay for it,” Politico reports.

“The governor made it clear Thursday that he wants to use $3.5 billion from Biden’s American Rescue Plan to help fund nearly every high-profile piece of his budget, setting up a scenario where the Biden administration could pay for policies DeSantis will use to campaign on during his reelection bid.”

“Plenty of House Republicans have softened their stance on remote voting during the pandemic. Not their leader, who’s digging in all the way to the Supreme Court,” Politico reports.

“The high court will decide as soon as Friday whether to take up the lawsuit that Minority Leader Kevin McCarthy and fellow House Republicans brought against a measure allowing proxy voting in the chamber. They’re fighting against the odds on multiple fronts: Not only did a federal appeals court previously dismiss the case, but more than half of McCarthy’s own conference took their name off the anti-proxy-voting lawsuit after initially signing on.”