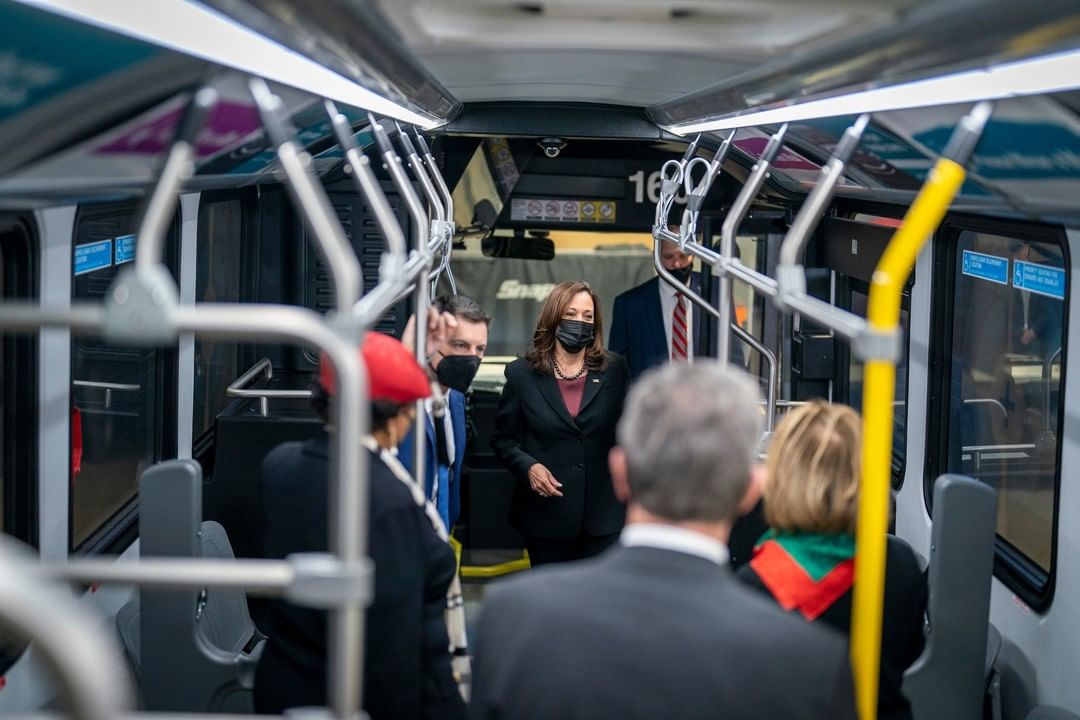 “What’s more, the intensity of disapproval is high — 38% said they strongly disapprove of Biden. That’s close to the territory that President Donald Trump resided in during his term.”

“While the numbers are a sign of a deeply polarized society, there’s also evidence of lackluster feelings for the president among even people in his own party. For example, in the survey, while 76% of Republicans strongly disapproved of the job Biden is doing, only 38% of Democrats strongly approved.”

TEXAS THIRTY-SEVENTH CD. Julie Oliver, who was the 2018 and 2020 Democratic nominee in the current 25th Congressional District, has announced that she will not wage a primary campaign against Rep. Lloyd Doggett in the new 37th District.

TEXAS TWENTY-EIGHTH CD. EMILY’s List, which supports pro-choice Democratic women, has endorsed attorney Jessica Cisneros, who is once again seeking to unseat Rep. Henry Cuellar in next year’s primary. In September, Cuellar was the lone House Democrat to vote against a bill to codify abortion rights into law following the passage of a Texas law that virtually bans abortion.

TEXAS FIFTEENTH CD. Hidalgo County Health Authority Ivan Melendez last week filed paperwork for a potential bid for the Democratic nod in this open 51-48 Trump seat, a move that comes just ahead of the Dec. 13 filing deadline. Melendez promised to convey “more about my plans to serve our community in the coming days.”

NEW YORK GOVERNOR / ATTORNEY GENERAL. “Letitia James, the attorney general of New York, announced on Thursday that she was dropping out of the governor’s race and running instead for re-election,” the New York Times reports.

“Her decision upends the high-profile race for governor and further solidifies Gov. Kathy Hochul’s standing as the early front-runner.”

CALIFORNIA FOURTEENTH CD. Retiring Democratic Rep. Jackie Speier endorsed Assemblyman Kevin Mullin, who worked for her when she served in the state Senate, as her preferred successor on Monday.

NORTH CAROLINA THIRTEENTH CD. Huntersville Mayor John Aneralla has entered the GOP primary for North Carolina’s 13th Congressional District, apparently undeterred by Rep. Madison Cawthorn’s strange decision to seek re-election there. However, Cawthorn only represents 12% of the new 13th—about 87,000 people—so despite his national profile, he doesn’t start with a large base of voters who’ve cast ballots for him before. Huntersville, meanwhile, is a fast-growing suburb of Charlotte with a population of 61,000.

ILLINOIS ELEVENTH CD. Former Trump official Catalina Lauf, who says she raised $1 million primarying GOP Rep. Adam Kinzinger in the old 16th District, said this week that she’s switching to the new 11th, where she’ll seek to take on Democratic Rep. Bill Foster. Kinzinger announced his retirement in October after Democrats all but dismantled his seat in redistricting, leaving him without a plausible district to run in. But while the 11th got redder, it still won’t be particularly friendly to Lauf: It would have voted for Joe Biden by a 57-41 margin, according to Dave’s Redistricting App, compared to 62-36 under the old lines.

FLORIDA TWENTIETH CD. Broward County Commissioner Dale Holness, who still hasn’t conceded after losing last month’s special election primary by five votes, is reportedly planning to run again next year and has filed paperwork with the FEC to do so. (He’s also filed a bonkers lawsuit to overturn the results, saying that the winner, businesswoman Sheila Cherfilus-McCormick, tried to bribe voters … by proposing $1,000 monthly payments to most adults as a universal basic income.)

Meanwhile, Broward County Commissioner Barbara Sharief, who took third place, says she is “more than likely” to run again but is “waiting to see what the districts look like.” (Right now, several different proposed maps are circulating in the legislature.) However, state Rep. Bobby DuBose, who finished a distant fifth, won’t try a second time. As an aside, all of the also-rans who currently hold office will have to resign their posts as of Jan. 11, the date of the special election, under Florida’s “resign-to-run” law.

TEXAS LT. GOVERNOR. “Matthew Dowd, a former George W. Bush political strategist who had launched a bid to be the Democratic nominee for lieutenant governor in 2022, ended his campaign Tuesday, six days before the candidate filing deadline,” the Texas Tribune reports.

Said Dowd: “When I first announced, the only other candidate was a white male Christian. A diverse field is now emerging in the Democratic primary for this office. I do not want to be the one who stands in the way of the greater diversity we need in politics.”

IOWA GOVERNOR. State Auditor Rob Sand said Tuesday that he would run for re-election rather than seek the Democratic nomination to take on Republican Gov. Kim Reynolds. The Democratic field for governor currently consists of Deidre DeJear, who was the 2018 nominee for secretary of state, and state Rep. Ras Smith, while state Sen. Pam Jochum expressed interest back in September.

PENNSYLVANIA GOVERNOR. State Sen. Scott Martin, a Republican who formed an exploratory committee back in June, says he will have an announcement on Saturday.

OREGON GOVERNOR. 2018 Republican nominee Knute Buehler said Tuesday he was backing the campaign of state Sen. Betsy Johnson, a longtime conservative Democrat who is running for governor as an independent.

Buehler fared poorly in last year’s primary for the 2nd Congressional District so his endorsement may not mean much to GOP voters, but Oregon Capital Bureau’s Gary Warner notes there’s one person who could be influenced by his decision. Nike founder Phil Knight contributed $2.5 million to Buehler’s 2018 campaign and funded a super PAC to aid him in 2020, and the megadonor has yet to pick sides this time.

CALIFORNIA TWENTY-SECOND CD. Fresno County Supervisor Nathan Magsig on Wednesday became the first notable Republican to enter the race to succeed far-right Rep. Devin Nunes following his surprise Monday resignation announcement, a move that comes even though no one knows what California’s new congressional map will look like. Another Republican, state Sen. Andreas Borgeas, has filed with the FEC, though he doesn’t appear to have confirmed he’ll run either in the upcoming special to succeed Nunes or for a regular two-year term.

Several other local Republicans are also talking about campaigning here. Fresno City Councilman Garry Bredefeld and Assemblyman Devon Mathis both informed the Fresno Bee they were thinking about getting in, with Mathis adding that he was awaiting the new map.

Assemblyman Jim Patterson likewise told the GV Wire’s David Taub, “I will decide one way or the other after the final maps for my assembly seat and the congressional seat are finalized.” Patterson, who is a former mayor of Fresno, unsuccessfully campaigned for Congress twice in the Central Valley under the prior version of California’s maps. He ran in 2002 for what was then the 21st District and lost the GOP primary to none other than Nunes 37-33. Patterson tried again in 2010 to succeed retiring Rep. George Radanovich in the 19th District, but state Sen. Jeff Denham earned the nomination 36-31.

On the Democratic side, 2020 nominee Phil Arballo said that, while he’d already announced a bid against Nunes, he wasn’t sure if he’d be running in the special for what is currently a 52-46 Trump seat. “When the timeline of Nunes’ retirement & subsequent events becomes more clear Phil will decide what the appropriate path forward will be,” said Arballo’s team. Andrew Janz, the 2018 nominee who unsuccessfully ran for mayor of Fresno last year, does not appear to have said anything yet.

NORTH CAROLINA FOURTH CD, SEVENTH CD, and U.S. SENATOR. Former Republican Rep. Renee Ellmers announced Wednesday that she’d try to return to Congress by campaigning for the new and open 4th District, a seat that Donald Trump won 53-45, but she ran into some big complications even before the state Supreme Court delayed the primary (see our North Carolina item).

Former football player Bo Hines is currently running for the 7th District even though he lives in the 4th, but a big shakeup could be coming. Jack Minor, who is a former chief of staff to ex-Rep. Mark Walker, told Politico that an agreement was reached over the weekend where Walker would drop his Senate campaign in order to run for the 7th, Hines would switch to the 4th, and both would get Trump’s endorsement. (Ellmers Twitter bio includes “Trump won” and features a pinned Tweet with three arrows pointing to a missive from Trump that was removed along with the rest of his account.)

Hines himself didn’t respond to questions about a potential move after he emerged from a Wednesday meeting with House Minority Leader Kevin McCarthy, a man that, as we’ll discuss, Ellmers has had a very complicated relationship with. The GOP field in the 4th already includes state Rep. John Szoka and former Fayetteville Mayor Nat Robertson.

Ellmers herself represented part of the greater Raleigh area in the House from 2011 to 2017 in a brief career that was defined by some very wild swings of fortune. Ellmers, who was a nurse at the time, attracted little attention when she kicked off her 2010 bid against longtime Democratic Rep. Bob Etheridge in what was then the 2nd District. However, the GOP wave, plus Etheridge’s bad response to conservative video trackers, helped her pull off a 49.5-48.7 upset.

GOP mapmakers soon redrew North Carolina’s congressional map in time for the 2012 elections, and Ellmers went from running in a swing seat designed to protect Etheridge to a gerrymandered and reliably Republican district. Ellmers had no trouble winning her next two general elections, including a high-profile 2014 contest against American Idol runner-up Clay Aiken that she prevailed in by a 59-41 margin. However, Ellmers was never very popular with the GOP rank-and-file, and she only won renomination with less than 60% of the vote in both cycles.

Things began to truly collapse for Ellmers in 2015, though, when she pissed off the anti-tax Club for Growth for voting to raise the debt ceiling and reauthorize the dreaded Export-Import Bank, and social conservatives were also unhappy with her for suggesting to congressional leadership that an ultra-extreme measure to restrict abortion access just might be bad for the party.

Ellmers also had to deal with unsubstantiated rumors that she had an affair with McCarthy, something they both denied had ever happened. That year, Ellmers sounded incredibly reluctant to support McCarthy against Utah Rep. Jason Chaffetz in the race to succeed John Boehner as speaker. She relayed that only Chaffetz had contacted her, and added of McCarthy, “I can’t vote for someone who doesn’t ask for my vote. I’m apparently not high on his priority list.” (The speaker’s gavel would end up going to Paul Ryan.)

Ellmers was already facing a tough 2016 primary before the courts ordered the state legislature to redraw their congressional map, and this time, the boundaries the GOP crafted worked out very badly for her. She ended up competing in a primary for the new 2nd District against fellow Rep. George Holding, who represented about twice as much of the new seat and had far more money and allies. Trump delivered a very late endorsement to Ellmers just days before the primary, but that was far from enough to prevent Holding from beating her 53-24.

Trump gave Ellmers a consolation prize the following year when he gave her the job of running the Atlanta office of the Department of Health and Human Services, but she wasn’t done with running for office yet. Ellmers entered the 2020 primary for lieutenant governor but took fifth place with a mere 7% of the vote.

“Political advertisers on Facebook are supposed to identify themselves as such. That way, Facebook can log their ads in an archive and, as was the company’s policy in 2020, even prevent those ads from running close to an election,” Protocol reports.

“Of course, both accidentally and intentionally, not every political advertiser plays by Facebook’s rules, meaning Facebook often has to decide what is and isn’t a political ad even after the ad runs.”