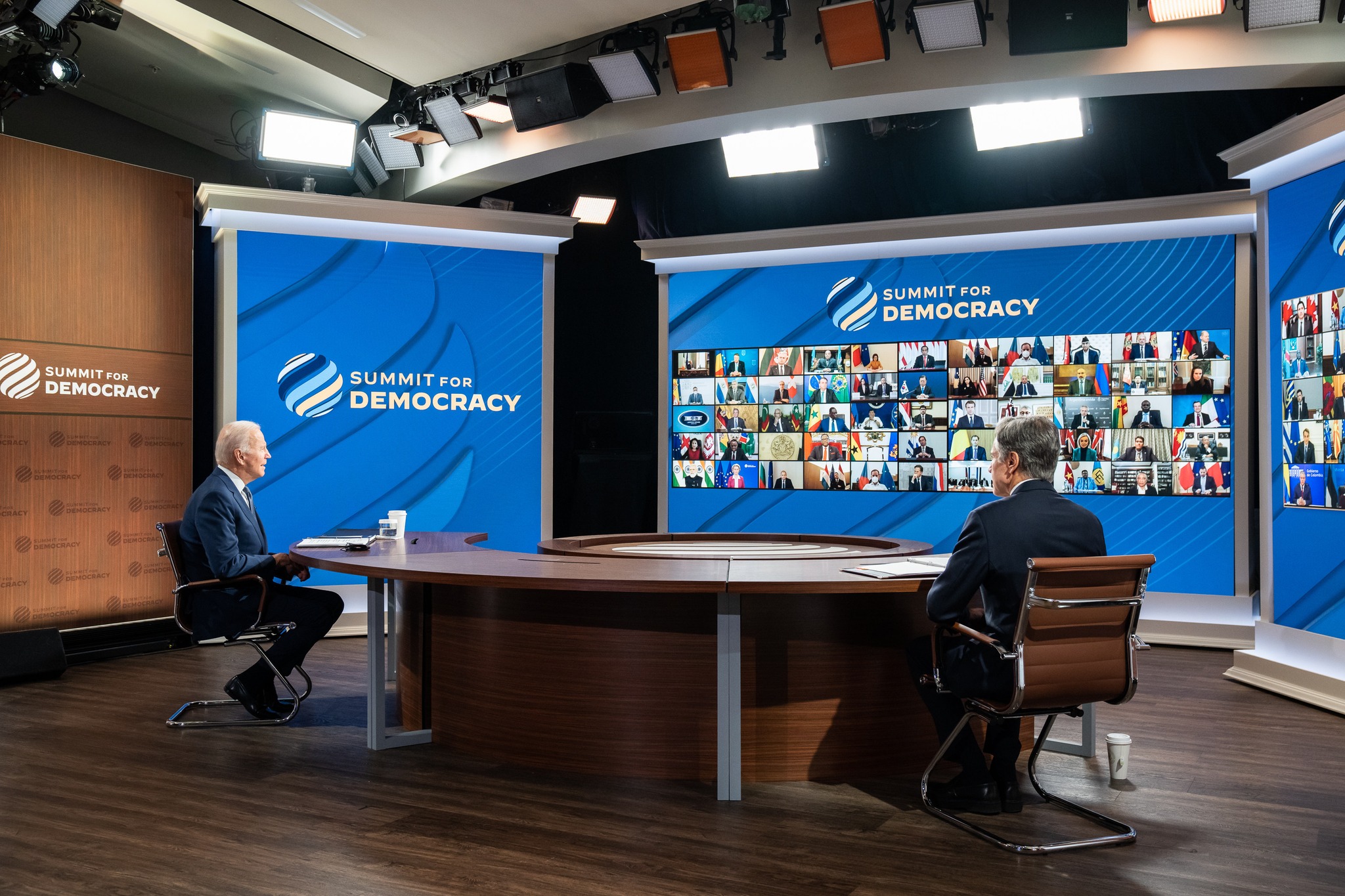 “The Senate on Thursday cleared away the last major hurdle to raising the debt ceiling, effectively ending a Republican blockade and all but guaranteeing that Congress will be able to move quickly in the coming days to steer the government away from a first-ever federal default,” the New York Times reports.

“In a vote of 64-36, 14 Republicans joined every Democrat to take up legislation that would smooth and speed the way for Congress to increase the statutory borrowing limit by a set amount, still to be determined.”

“Sen. Lindsey Graham (R-SC) offered a forceful warning to Republican colleagues during a private lunch on Wednesday, saying former President Trump will come down hard on any GOP senators who vote for Senate Minority Leader Mitch McConnell’s (R-KY) deal to set up a special pathway to raise the debt limit,” The Hill reports.

“By an overwhelming margin, the House passed a bill to spend $778 billion on defense next year, $25 billion more than what President Joe Biden had requested. The Senate is expected to second the motion within days,” Slate reports.

“Yet no officials or lawmakers have spelled out why the budget—which includes $740 billion for the Pentagon and $28 billion for the Energy Department’s nuclear-weapons programs—needs to be quite this huge.”

Dr. Rochelle Walensky, director of the Centers for Disease Control and Prevention, said that more than 40 people in the U.S. have been found to be infected with the omicron variant so far, and more than three-quarters of them had been vaccinated,” the AP reports.

“But she said nearly all of them were only mildly ill.”

“The omicron variant of Covid-19 is 4.2 times more transmissible in its early stage than delta, according to a study by a Japanese scientist who advises the country’s health ministry, a finding likely to confirm fears about the new strain’s contagiousness,” Bloomberg reports.

“More than 200 million Americans — over 60 percent of the population — have been fully vaccinated against the coronavirus,” the New York Times reports.

“The United States remains far behind not only developed countries like Singapore and Portugal, which will soon have vaccinated 90 percent of their populations, but developing nations like Cambodia (over 80 percent).”

Daily Beast: “Meadows’ attorneys wrote in the suit, filed in Washington D.C. federal court on Wednesday, that if Meadows does comply with the committee’s request, he would be ‘illegally coerced into violating the Constitution.’”

“Ali Alexander, a prominent organizer of Stop the Steal rallies with ties to far-right members of Congress who sought to invalidate the 2020 election results, is cooperating with the House committee investigating the Jan. 6 Capitol riot, pledging to deliver a trove of documents that could shed light on the activities that preceded the attack,” the New York Times reports.

“The participation of Mr. Alexander, who is scheduled to be deposed by the panel on Thursday, could provide insight into the nature and extent of the planning by President Donald Trump and his Republican allies in Congress for their bid to overturn the election on Jan. 6. It could also help clarify whether and to what degree the prospect of violence was discussed or contemplated before or during the rampage.”

“Witnesses seeking to evade testimony to the Jan. 6 committee may have landed on their most potent strategy: Pleading the Fifth,” Politico reports.

“Legal experts say the committee has few options once a witness pleads the Fifth — and the choices they do have are risky or impractical.”

Mark Meadows and the National Archives are in talks over potential records he did “not properly” turn over from his personal phone and email account, Politico  reports.

Tester said he’s “not crazy about mandates” and described the vaccine requirements as “burdensome regulations.”

The resolution obviously won’t go anywhere. The House won’t pass it, and it goes without saying that Biden won’t sign it if it does miraculously end up on his desk.

Wall Street Journal: “Initial jobless claims, a proxy for layoffs, fell to 184,000 in the week ended Dec. 4, the lowest level since September 1969… That was close to a recent record total of 194,000 recorded in late November.”

“Americans’ overall income has accelerated since the pandemic, but so has inflation — and a new poll finds that far more people are noticing the higher prices than the pay gains,” the AP reports.  “Two-thirds say their household costs have risen since the pandemic, compared with only about a quarter who say their incomes have increased.”

California lawmakers and abortion providers unveiled a plan yesterday to make the state a “sanctuary” if the Supreme Court strikes down Roe. Under the plan, which has Gov. Gavin Newsom’s (D) support, state funding would cover out-of-state patients’ travel expenses, including gas, lodging and transportation. Additionally, abortion providers would be reimbursed for the procedure if the patient couldn’t afford to pay.

“State lawmakers preparing to convene legislative sessions in the new year are confronted with a scenario unlike any they, or most of their predecessors, have ever experienced: budgets that are flush with cash after a year of record-setting surpluses,” The Hill reports.

“The influx of new money, fueled by a quick economic recovery from the coronavirus pandemic and billions in emergency federal funding for state and local governments, has spurred new talk of significant tax cuts. Across both blue states and red states, and just in time for midterm elections, legislators and governors are making plans to lower rates and cut bills.”

“New York Attorney General Letitia James is seeking a deposition from former president Donald Trump early next year as part of her investigation into potential fraud inside the Trump Organization,” the Washington Post reports.

“James has requested to take his testimony on Jan. 7 at her New York office as part of a civil investigation into whether Trump’s company committed financial fraud in the valuations of properties to different entities.”

“One of the people familiar with the investigation said James is examining whether widespread fraud ‘permeated the Trump Organization.’”

Sen. Ron Johnson (R-WI) recommended mouthwash as a treatment for the coronavirus during a town hall meeting Wednesday, the Washington Post reports.  Said Johnson: “Standard gargle, mouthwash, has been proven to kill the coronavirus. If you get it, you may reduce viral replication. Why not try all these things?”  Johnson later shared on Twitter a study on a public website that says backs up his point.

“The Biden administration is moving to tighten enforcement of sanctions against Iran, according to senior U.S. officials, the first sign of Washington increasing economic pressure on Tehran as diplomatic efforts to restore the 2015 nuclear deal falter,” the Wall Street Journal reports.

“President Joe Biden is ready to urge participants at the first White House Summit for Democracy to reverse an ongoing ‘recession’ of democracy that is playing out at a time of rising authoritarianism around the globe and extraordinary strains on foundational institutions in the U.S., the AP reports.

“The two-day virtual summit that starts Thursday has been billed as an opportunity for leaders and civil society experts from some 110 countries to collaborate on fighting corruption and promoting respect for human rights. But the gathering already has drawn backlash from the United States’ chief adversaries and other nations that were not invited to participate.”

“A small group of Senate Democrats is privately invoking the legacy of late West Virginia Sen. Robert Byrd in an effort to sway Sen. Joe Manchin (D-WV) to support their plans to change the chamber’s rules,” Axios reports.

“Manchin — who holds Byrd’s Senate seat — has often referenced his predecessor’s strong moral conviction and insistence on preserving the Senate as an institution, as justification for some of his tough positions.”

“Even Byrd, one of the most ardent defenders of Senate decorum and procedure, helped change the Senate rules in the face of obstruction, these senators argue.”

“Senators voted 52-48 on the resolution, which needed a simple majority to be approved. Democratic Sens. Jon Tester and Joe Manchin voted with Republicans, giving it enough support to be sent to the House.”

“The resolution faces an uphill path in the House, where Republicans aren’t able to use a similar fast-track process to force a vote over the objections of Democratic leadership.”

“The German-born father of Chilean presidential frontrunner José Antonio Kast was a member of Adolf Hitler’s Nazi party, revelations that appear at odds with the far-right candidate’s own statements about his father’s military service during World War II,” the AP reports.

“The ID card’s emergence adds a new twist to a highly charged presidential runoff billed on both side as a battle of extremes — between communism and right-wing authoritarianism — and marked by a steady flow of disinformation that has distorted the record and campaign pledges of Kast’s opponent.”

“Finland’s Prime Minister Sanna Marin has apologized for going clubbing after coming into close contact with a Covid-19 case,” the BBC reports.  “She was initially told she did not need to isolate because she had been fully vaccinated, but later missed a text that advised her to do so.”

“The announcement that Boris Johnson’s wife gave birth to a baby girl offers the embattled U.K. prime minister some relief from the barrage of negative coverage he’s endured,” Bloomberg reports.  “The prime minister is believed to have fathered seven children, though the exact number is a matter of speculation.”

“New Zealand will ban the sale of tobacco to its next generation, in a bid to eventually phase out smoking,” the BBC reports.  “Anyone born after 2008 will not be able to buy cigarettes or tobacco products in their lifetime, under a law expected to be enacted next year.”

Prime Minister Boris Johnson said that there would be “effectively a diplomatic boycott” of the 2022 Beijing Olympics by Britain, which has now joined the United States and others in pulling its top officials from attendance of the Winter Games, the New York Times reports.   Australia, Canada and Lithuania have also announced a diplomatic boycott.