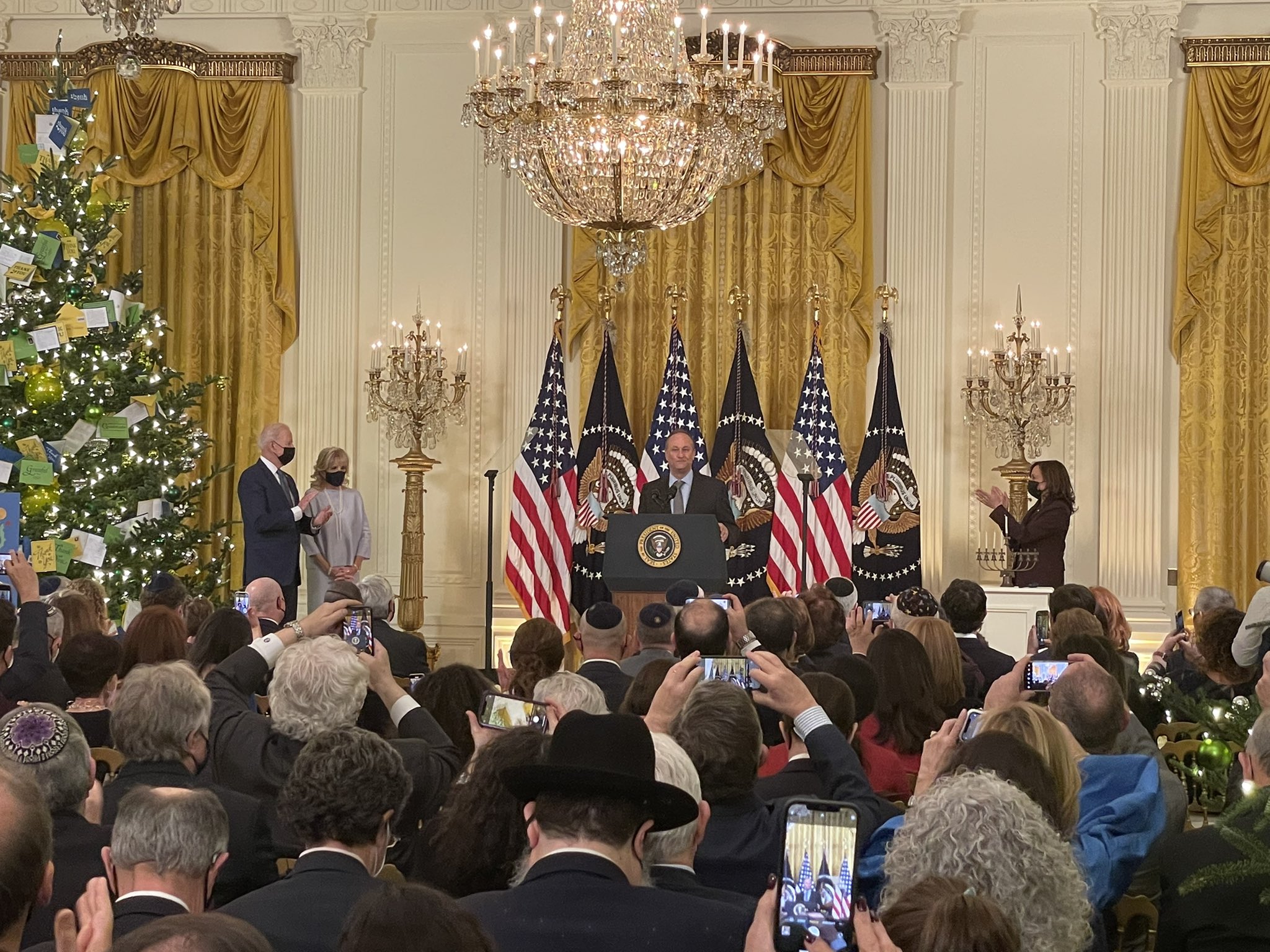 A new Wall Street Journal poll finds that President Biden’s approval rate is 41% to 57% overall, but just 29% to 63% among undecided midterm voters and 30% to 60% among independent voters.

In addition, more voters say they would back a Republican than a Democrat for Congress, 44% to 41%, if the election were held today.

The inherent nature of Covid-19 is that it transfers from person to person. That means the choices we make as individuals literally affect everyone else. That’s just science.   Nonetheless, almost no unvaccinated Republicans (and even most vaccinated Republicans) believe they have any responsibility to their community.

How is it possible to beat a pandemic when so many refuse to acknowledge their obligations to their fellow citizens?

The Atlantic has a very good profile of freshman Rep. Peter Meijer (R-MI), in which he describes what he saw during the Capitol insurrection:

“On the House floor, moments before the vote, Meijer approached a member who appeared on the verge of a breakdown. He asked his new colleague if he was okay. The member responded that he was not; that no matter his belief in the legitimacy of the election, he could no longer vote to certify the results, because he feared for his family’s safety.”

Said Meijer: “Remember, this wasn’t a hypothetical. You were casting that vote after seeing with your own two eyes what some of these people are capable of. If they’re willing to come after you inside the U.S. Capitol, what will they do when you’re at home with your kids?”

Karen Tumulty: “One recent poll conducted for NPR, PBS NewsHour and Marist College, for instance, finds that a plurality of Democrats — 44 percent — believe their party has a better chance of winning if President Biden is replaced as their candidate.”

“My question is: How would anyone know? And here’s another one: Why are pollsters even asking, when there is a huge midterm election looming in between, the trajectory of the economy is uncertain and no one knows when or even if we are going to put the covid-19 crisis behind us? All of these are likely to be determinants of both parties’ prospects in 2024, regardless of who is at the top of their tickets.”

First Read: “That was one of the main takeaways that Democratic pollsters made after conducting focus groups of Virginians who voted for President Biden in 2020, but who broke for Republican Glenn Youngkin in last month’s gubernatorial race or strongly considered it. (By the way, these pollsters work at the firm that does President Biden’s polling.)”

From the memo: “Voters couldn’t name anything that Democrats had done, except a few who said we passed the infrastructure bill. That bill didn’t overcome their opinions that we have spent the last year infighting and careening from crisis to crisis.”

“After they passed a $1.9 trillion Covid relief bill (which included direct $1,400 checks), after they cleared a $1.2 trillion infrastructure bill (though only after losing in Virginia) and after spending the last several months crafting a climate/universal pre-K/child care/prescription drug/health care bill, these voters thought Democrats were more focused on social issues than the economy.”

“A group formed to support former President Donald Trump’s agenda is working with Wisconsin Republicans on a ballot measure that would bypass the state’s Democratic governor to change how elections are run in the battleground state,” the AP reports.

“The effort represents a new escalation in the ongoing Republican campaign to alter voting laws in response to Trump’s false claims of widespread fraud in the 2020 election. It comes as Wisconsin has become the epicenter of this year’s voting wars, with Republicans trying to dismantle the election system they themselves put in place several years ago — and figure out how to do that with a Democratic governor still in office.”

CALIFORNIA TWENTY SECOND CD. Rep. Devin Nunes (R-CA) will soon announce he is retiring at the end of this month, Politico reports.  Nunes was in line to be House Ways and Means chairman if Republicans win the majority in next year’s election.

It’s not yet clear whether there will be a special election to fill Nunes’ seat, or whether it will remain vacant until the November general election.

“The U.S. Department of Justice is throwing its weight into the legal fight over Texas’ newly drawn maps for Congress and the state House,” the Texas Tribune reports.

“The Biden administration on Monday announced it has filed a lawsuit in federal court in Texas, joining what’s expected to be a protracted fight over the political boundaries the state will use for elections to come. It joins a collection of individual voters and organizations representing voters of color that have already sued the state over maps that help solidify the GOP’s dominance while weakening the influence of voters of color.”

The decision sets up a major clash between a man Trump already victimized and one he’d like to. Perdue, a wealthy businessman who made his fortune outsourcing jobs overseas, first entered politics in 2014 when he won a competitive open-seat race for Senate against Democrat Michelle Nunn, aided by that year’s favorable winds. But six years later, with Georgia diversifying rapidly and Trump pushing many once-reliable suburban voters away from the party, Perdue was forced into a runoff against Democrat Jon Ossoff after narrowly failing to secure a majority in November.

It was during that runoff that Trump may have dealt his worst damage to Perdue: In his endless (and fact-free) ranting that the presidential election had been rigged, Trump all but sent the message to his supporters that it wasn’t worth voting at all. We’ll never know for sure whether that was the difference-maker—the senator’s own highly questionable stock trades, as well as Mitch McConnell’s refusal to send Americans another COVID relief check, also loomed large—but with a final losing margin of just 55,000 votes, Perdue will always be left wondering.

The same election that sent Perdue to his runoff, of course, is also what earned Kemp Trump’s undying enmity. Kemp and Secretary of State Brad Raffensperger, a fellow Republican, refused to participate in the Big Lie despite Trump’s interference, immediately putting them on Trump’s shitlist. Raffensperger soon earned a Trump-backed primary from Rep. Jody Hice in March, though Kemp sought a reprieve by signing a wide-ranging new voter suppression bill just days later.

It didn’t work: Trump berated the bill as “far too weak and soft” and charged that Kemp had “caved to the radical left-wing woke mob who threatened to call him racist if he got rid of weekend voting.” At a September rally in Georgia, Trump even disdainfully sniffed that electing Kemp’s Democratic opponent from 2018, Stacey Abrams, “might be better than having your existing governor.”

Trump may just get to find out. Abrams recently launched a second bid of her own, which explains why Perdue, who’d reportedly been pressed to run by Trump, focused so heavily on attacking her in his kickoff video. He also blamed Kemp for his own loss, whinging, “Instead of protecting our elections, he caved to Abrams and cost us two Senate seats, the Senate majority, and gave Joe Biden free rein.”

Kemp instantly fired back, naturally faulting Perdue for losing the election that, well, Perdue ran in. He charged that the ex-senator’s “only reason for running is to sooth [sic] his own bruised ego” and sneered, “It may be difficult” for Perdue to see “over the gates of his coastal estate.”

Democrats have every reason to root for a nasty, expensive battle for the GOP nomination that leaves the winner bloodied and bruised. Even better might be a primary runoff—a possibility, since former state Rep. Vernon Jones and several other minor candidates could stop Kemp or Perdue from securing a majority in May and thereby drag things out until July.

But no matter how much the eventual winner abases himself in a show of fealty to Trump, that may not be enough to render them unpalatable to a sufficient number of voters. After all, Perdue very nearly won in Georgia last year—and so did Trump.

Jeffrey Goldberg: “Stating plainly that one of America’s two major parties, the party putatively devoted to advancing the ideas and ideals of conservatism, has now fallen into autocratic disrepute is unnerving for a magazine committed to being, in the words of our founding manifesto, ‘of no party or clique.’ Criticism of the Republican Party does not suggest an axiomatic endorsement of the Democratic Party, its leaders and policies. Substantive, even caustic, critiques can of course be made up and down the Democratic line.”

“But avoiding partisan entanglement does not mean that we must turn away from the obvious. The leaders of the Republican Party—the soul-blighted Donald Trump and the satraps and lackeys who abet his nefarious behavior—are attempting to destroy the foundations of American democracy. This must be stated clearly, and repeatedly.”

MISSOURI U.S. SENATOR. Republican pollster Remington Research, once again polling on behalf of local newsletter Missouri Scout, continues to find a very tight GOP primary for next year’s open Senate race. Former Gov. Eric Greitens leads with 27% while state Attorney General Eric Schmitt is at 24, Rep. Vicky Hartzler at 16, and Rep. Billy Long at 7, with other hopefuls in the low single digits and 19% undecided. When Remington last looked at the contest in October, things weren’t much different, with Greitens edging out Schmitt 27-25, Hartzler taking 19, and Long 8.

NEW HAMPSHIRE U.S. SENATOR. Londonderry town manager Kevin Smith, who’d reportedly been considering a bid against Democratic Sen. Maggie Hassan, confirmed that he’s weighing the race and promised a decision “shortly after the new year.” Smith sought the GOP nod for governor in 2012 but lost the primary 68-30 to Ovide Lamontagne, who went on to lose to Hassan.

OHIO GOVERNOR. Republican Rep. Warren Davidson, who first floated the possibility of running against Gov. Mike DeWine in next year’s GOP primary back in March, has finally taken his name out of contention. Davidson, however, did not say whether he’d actually endorse DeWine or would back his intra-party challenger, former Rep. Jim Renacci.