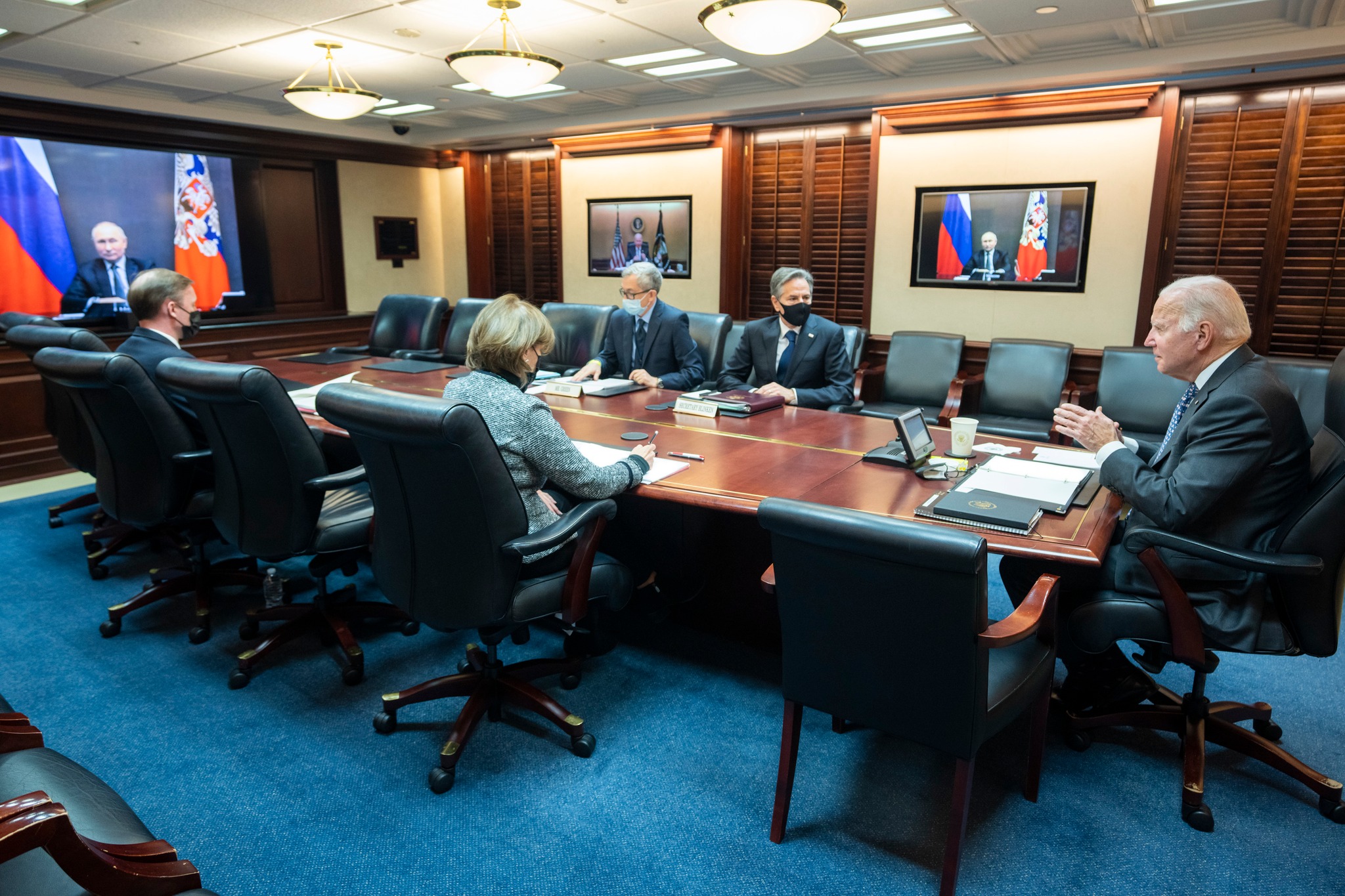 “The Covid-19 virus is spreading faster than ever in South Africa, the country’s president said Monday, an indication of how the new Omicron variant is driving the pandemic, but there are early indications that Omicron may cause less serious illness than other forms of the virus,” the New York Times reports.

“Researchers at a major hospital complex in Pretoria reported that their patients with the coronavirus are much less sick than those they have treated before, and that other hospitals are seeing the same trends. In fact, they said, most of their infected patients were admitted for other reasons and have no Covid symptoms.”

“House leaders introduced legislation that would pave the way for Democrats to raise the debt ceiling in the Senate without Republican support, as lawmakers closed in on a procedural agreement to resolve the partisan clash over lifting the government’s borrowing limit,” the Wall Street Journal reports.

Punchbowl News: “It’s early, but our reporting this morning from Capitol Hill leads us to believe that House and Senate leaders have found a way to raise the debt limit with a good possibility of minimal drama.”

“Senior Democrats are discussing combining the two items in a single legislative vehicle in a bid to end their partisan skirmish with upper-chamber Republicans who have refused to help them adjust the nation’s borrowing limit. But the Senate GOP largely poured cold water on the idea Monday and warned that the move would endanger the defense bill.”

“In a video call that lasted for just over two hours on Tuesday, President Biden warned Russian President Vladimir Putin that if Russia invades Ukraine the U.S. will impose unprecedented sanctions and provide additional weaponry to the Ukrainians,” Axios reports.

“The U.S. and European allies are weighing sanctions targeting Russia’s biggest banks and the country’s ability to convert rubles for dollars and other foreign currencies should President Vladimir Putin invade Ukraine,” Bloomberg reports.

“Taiwan and the US have agreed during high-level talks to set up a new trade framework as the two sides forge closer ties,” the South China Morning Post reports.

“Any one of these standoffs has the potential to shake the world order and produce wider conflict. Taken together, they signal that the U.S. and its allies are at a dangerous moment—perhaps more dangerous than many Americans realize. The challenge for President Biden and the democratic leaders he’ll be consulting with this week is to find a way to show firmness on each front without provoking a crisis.”

CNN: “The contingency planning is being led by the Pentagon and comes as the administration briefs Congress on how the US is preparing. In a ‘gloomy’ briefing to senators by senior State Department official Victoria Nuland on Monday night, Nuland outlined the tough sanctions package being prepared by the administration in response to a potential Russian attack, but acknowledged that the US’ options to deter an invasion are fairly limited.”

“It is still unclear whether Russian President Vladimir Putin has made the decision to invade… But he has amassed enough forces, equipment and supplies near Ukraine’s borders that he could move to attack on very short notice.”

“The former chief of staff to Vice President Mike Pence is cooperating with the House panel investigating the Jan. 6 Capitol insurrection,“ the AP reports.

“Marc Short was at the Capitol on Jan. 6 and accompanied Pence as he fled his post presiding over the Senate and hid from rioters who were calling for his hanging. Short is cooperating with the panel after receiving a subpoena.”

A source tells CNN the House Select Committee investigating the January 6 insurrection is getting “significant cooperation with Team Pence,” even if the committee has not openly discussed that.

In a letter to his colleagues, Senate Majority Leader Chuck Schumer (D-NY) reiterated his optimistic timeline for Senate Democrats to finish the Build Back Better bill, saying “our goal in the Senate is to pass the legislation before Christmas and get it to the president’s desk.”

Playbook: “But Christmas Eve is 18 days away and there are good reasons to believe that Dems will blow that deadline.”

Even if the bill passes the Senate by Christmas Eve, it will still need to go back to the House for a final vote.

“I wanna get it done no matter how long it takes.” — President Biden on whether he’ll pass his Build Back Better bill before Christmas.

Playbook: “What this means for the Jan. 6 committee: This is a significant step backward. Allies of former President Donald Trump have shown — once again — that they can effectively use the courts to evade accountability and slow down investigations.”

“What this means for Democrats: They had hoped the panel would wrap up its work this spring, leaving the party plenty of time before the midterms to pivot its focus to kitchen-table issues that resonate with voters. This new trial date could make that difficult. Now, the party has a choice not unlike what it faced in the first and second Trump impeachments: do they fight for evidence to the bitter end, or do they wind down their probe without talking to these critical people?”

“Federal prosecutors told a judge that they could present their case against Steve Bannon to a jury in a single day, pushing back on the former White House strategist’s efforts to delay his criminal trial over his refusal to comply with a congressional subpoena,” The Hill reports.

Bloomberg: “The share of global wealth held by billionaires surged to a record during the Covid-19 crisis… About 2,750 billionaires control 3.5% of the world’s wealth.”

FiveThirtyEight: “When he took over, 30 percent of active federal judges had been appointed by Trump. He also had just 49 federal court vacancies to fill at that point — less than half the number that Trump started with.”

“But Biden campaigned on offsetting Trump’s conservative stamp by nominating judges from diverse backgrounds, and he’s gotten more judicial nominees confirmed through the Senate than any president at this point in his first term in decades. Almost half of the 61 judges he’s nominated to the lower courts have been confirmed — a larger share than Trump or former President Barack Obama — although there’s been far less consensus in the Senate about Biden’s picks.”

“But perhaps even more significantly, Biden has delivered on his promise of diversity in a big way. According to our analysis, the vast majority of the judges who have been confirmed under his presidency are women or people of color. And the judges he’s named to the courts also have nontraditional professional backgrounds.”

“The Biden administration has approved more oil and gas drilling permits on public lands per month than the Trump administration did during the first three years of Donald Trump’s presidency,” the Washington Post reports.

New York Times: “Nearly four months since the Taliban seized power, Afghanistan is on the brink of a mass starvation that aid groups say threatens to kill a million children this winter — a toll that would dwarf the total number of Afghan civilians estimated to have been killed as a direct result of the war over the past 20 years.”

“While Afghanistan has suffered from malnutrition for decades, the country’s hunger crisis has drastically worsened in recent months. This winter, an estimated 22.8 million people — more than half the population — are expected to face potentially life-threatening levels of food insecurity… Of those, 8.7 million people are nearing famine — the worst stage of a food crisis.”

“Virginia Gov. Ralph Northam (D) announced on Sunday plans to remove the remaining pedestal that previously propped up Richmond’s Robert E. Lee statue and turn the land over to the city,” Axios reports.

“This marks a final step in the complete removal of the public memorial to the confederate general, following the statue’s removal in September.”

“The statue of Confederate Gen. Robert E. Lee that once provoked a deadly weekend of violence in Charlottesville will soon be melted down and turned into a new piece of public artwork,” the Washington Post reports.

“National security adviser Jake Sullivan spoke last week with relatives of U.S. hostages and others wrongfully detained abroad, after more than two dozen families expressed frustrations about their inability to get a meeting with him or President Biden,” Axios reports.

“Sullivan told families he’d been unaware they were seeking meetings with him.”

“Donald Trump’s new social media company forecasts it may have 81 million users by 2026 – or nearly 7 million more people than voted for him in the 2020 election and, as it happens, the same number that voted for the winner, Joe Biden,” The Guardian reports.

Matt Levine concludes there is “almost no sign” that Trump’s new company “is actually building a social network or a streaming platform or anything else.”

“Conservatives are aggressively building their own apps, phones, cryptocurrencies and publishing houses in an attempt to circumvent what they see as an increasingly liberal internet and media ecosystem,” Axios reports.

Former President Donald Trump told Fox News that his firing of former FBI Director James Comey was critical to his surviving four years in the White House.  Said Trump: “If I didn’t fire Comey, they were looking to take down the president of the United States.”   He added: “A lot of people tell me, ‘how you survived is the most incredible thing.’  I fired Comey. Had I not fired Comey you might not be talking to me right now…”

“Fired CNN host Chris Cuomo is set to sue the network if it balks at paying him at least $18 million to cover what’s left on his contract,” the New York Post reports.

“Chris Cuomo was absent from his weekday radio show on SiriusXM, two days after being fired by CNN following a scandal involving his effort to help his brother deal with accusations of sexual harassment,” The Hill reports.

Cuomo released a statement saying he was no longer doing his Sirius XM show.

HarperCollins said that it has canceled plans to publish a book by Chris Cuomo, who was fired over the weekend by CNN following controversy over his role advising his brother, disgraced former New York Gov. Andrew Cuomo, CNBC reports.

Meanwhile, the Wall Street Journal reports CNN President Jeff Zucker told employees in a meeting that the network won’t pay Cuomo a severance after firing him.